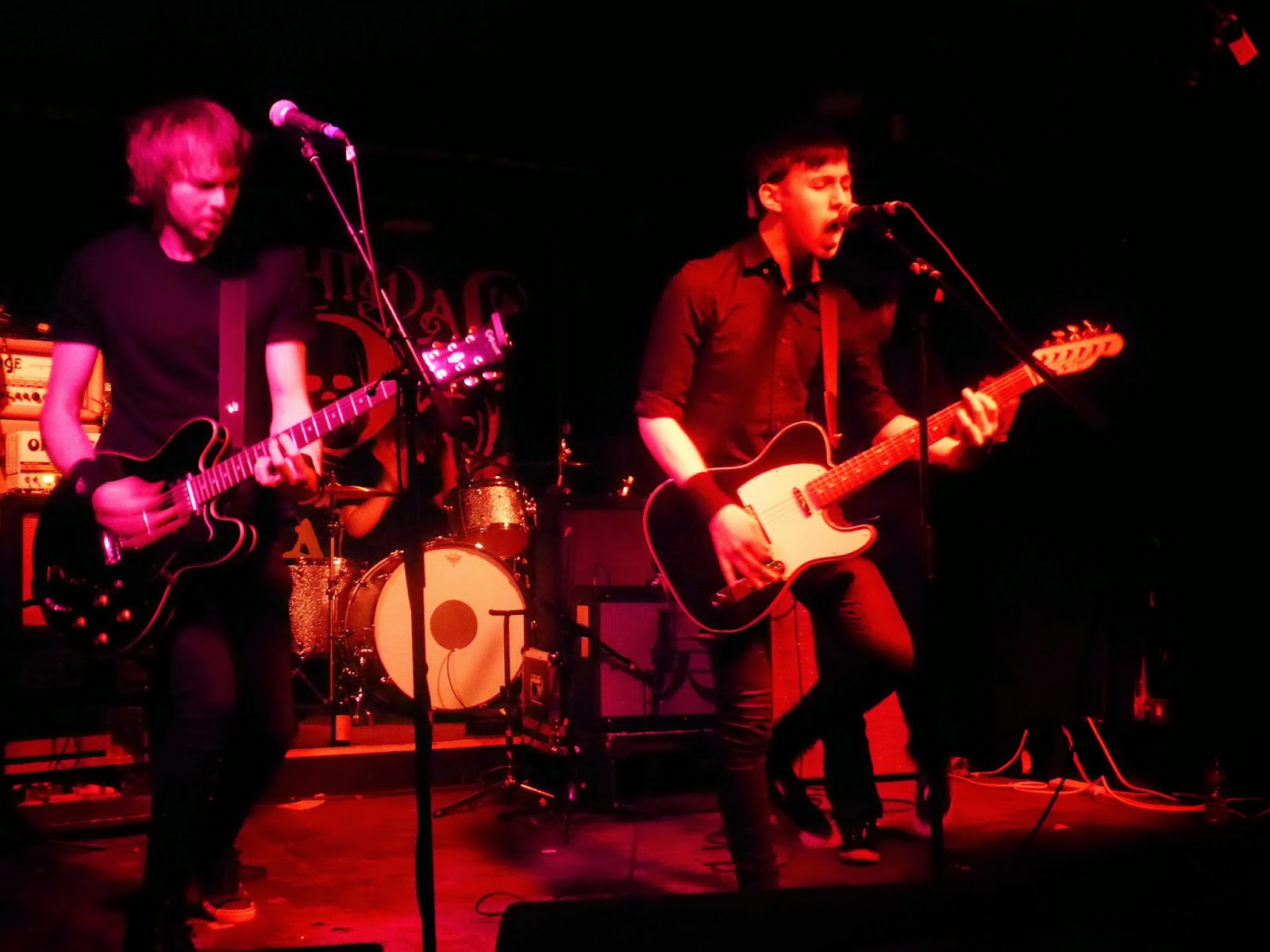 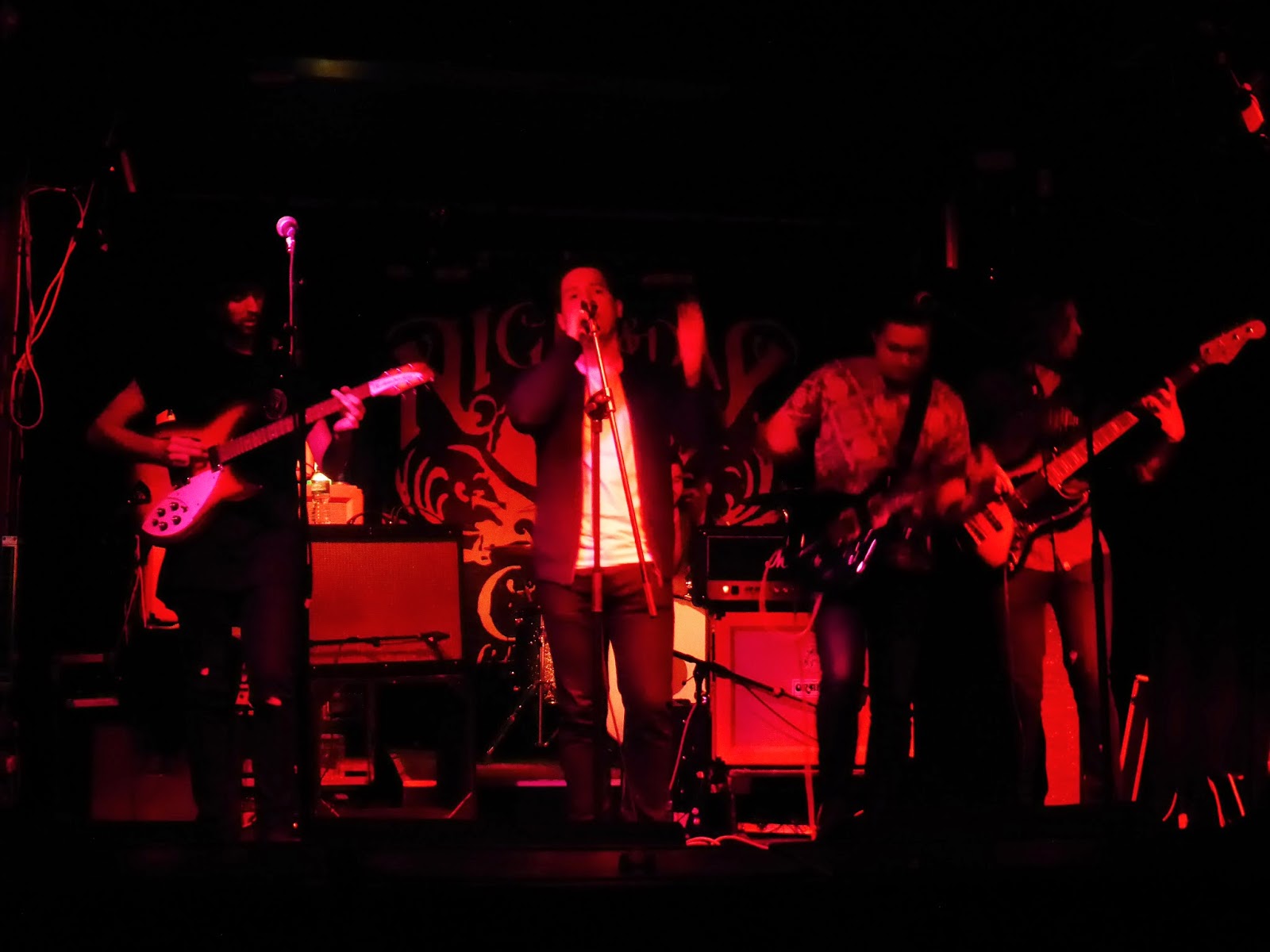 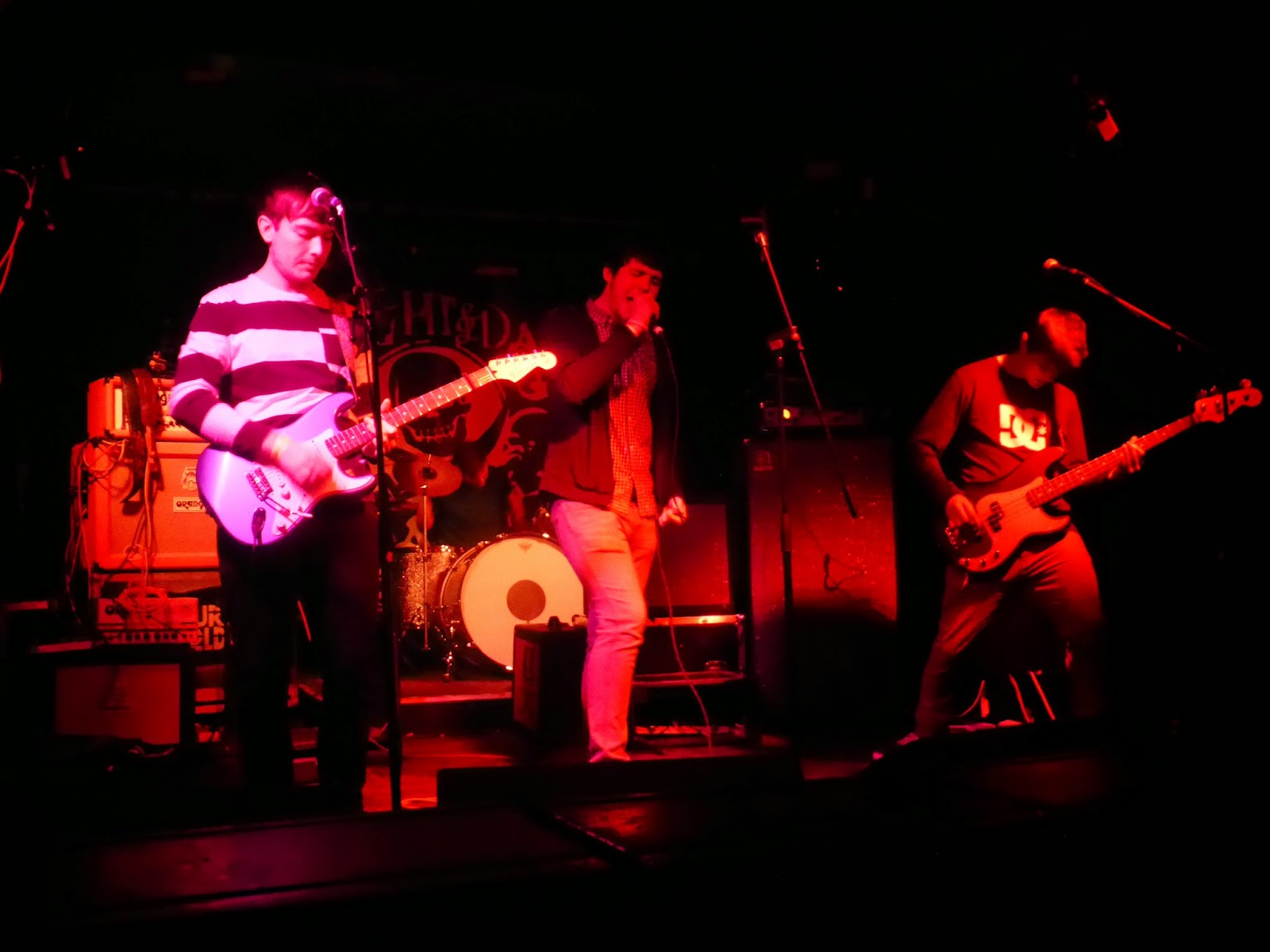 The latest Scruff Of The Neck Records gig at the Night And Day in Manchester followed the fine traditions it has established of pairing together great bands from in and outside Manchester and presenting them on the same bill. Whilst there's bands you know (and love), there's always new ones to discover. We caught ETS favourites Our Fold and Du Dauphine and discovered MRE and The Eyres.

Opening up are Manchester's MRE, a four-piece not lacking in confidence, both up on stage and in their songs. They start with their most recent Soundcloud track, Play Safe, stretched out to seven minutes with a sprawling intro and an intensity to it that draws the listener in. They don't go for big rock postures, as they could with the scale of their sound, but rely on the quality of their songs to impress and it's a successful approach. They debut a new track Does She Know, a song front man Matt tells us they've only got together in rehearsal this week, but you couldn't tell. 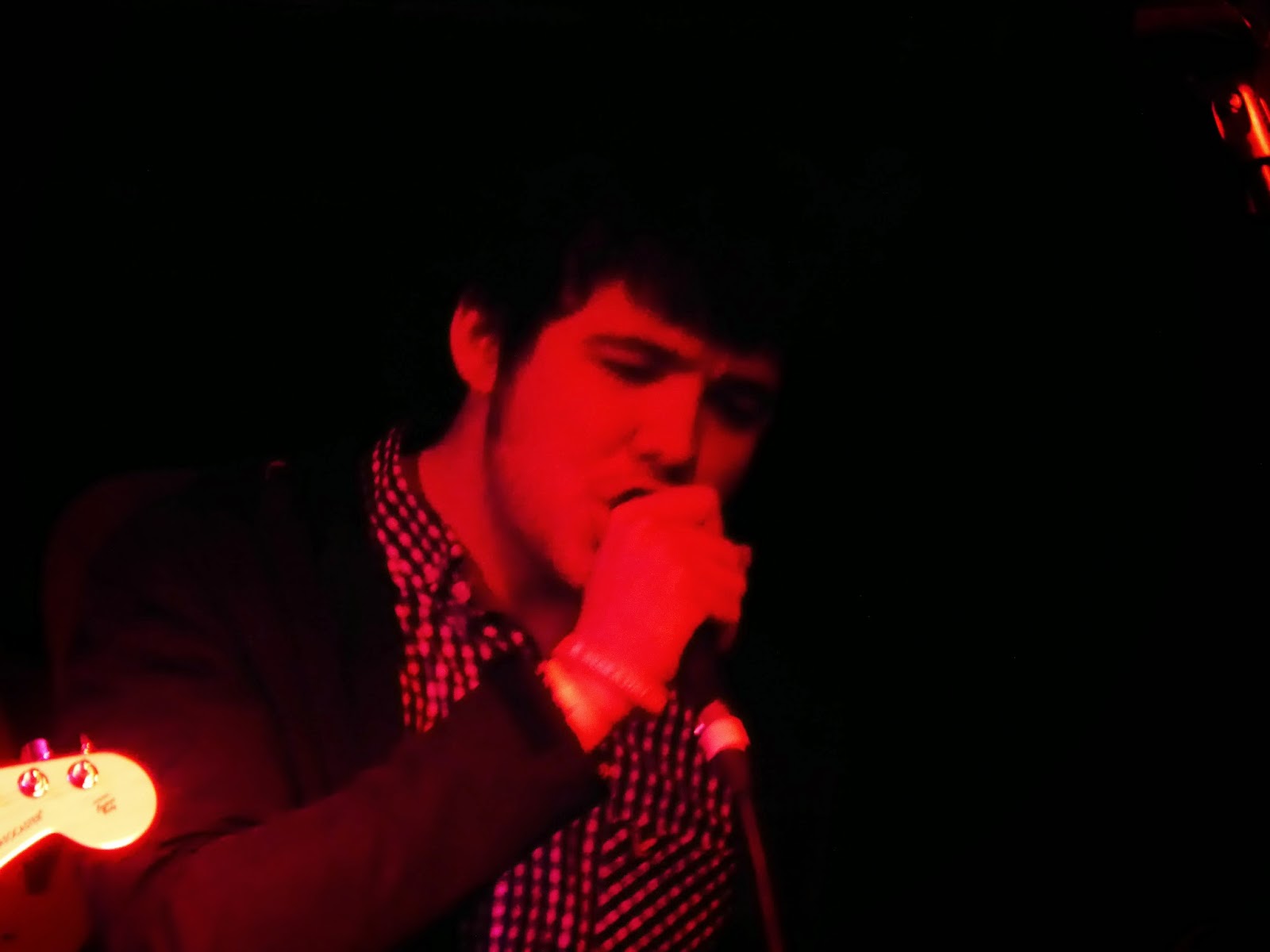 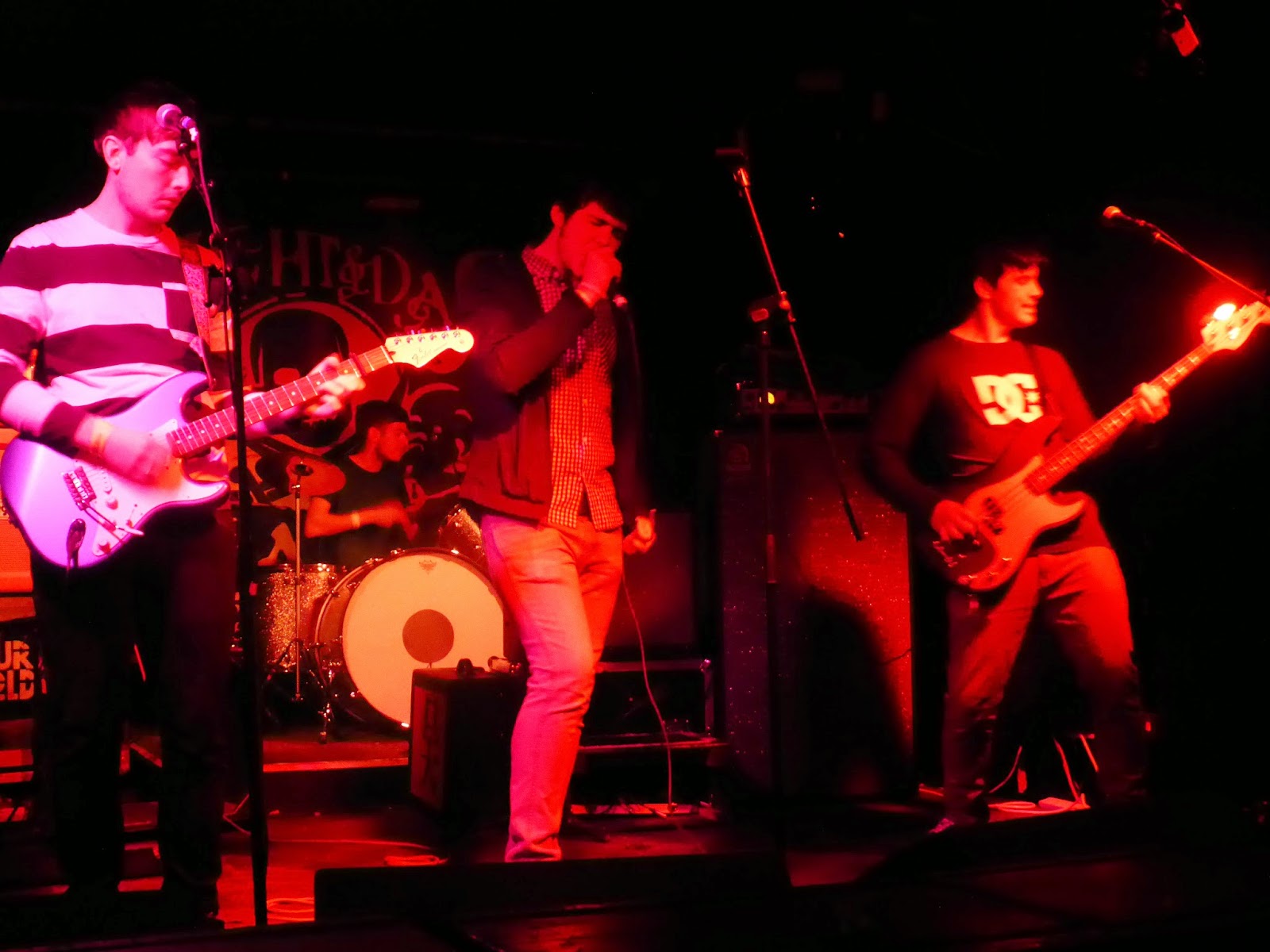 Sitting Softly, introduced as a love song, shows a softer, more reflective side to them. My mate reckons there's a bit of Oasis to them, and I can see his point, although it's more in that typically Mancunian cocksure belief in what they're doing, and, of course, the accent, rather than apeing their sound. They then cover Arctic Monkeys' Do You Wanna Know, and whilst they make a good fist of it and put their own mark on it, I want to hear their songs, not someone else's, particularly when they're as good as MRE's are.  They pick things back up with the rampant Blue Eyes, a big anthemic stomp, spitting with venom at a "bitch with big blue eyes" made for rooms bigger than this one. Similarly, final track Who I Wanna Be has a widescreen vision and ambition musically coupled with a lyric that appeals to everyone about becoming what you want to be that you could imagine thousands singing back to them.

Next up are Huddersfield's Du Dauphine. They're a band very definitely not lacking in confidence and ambition, they recall to us Simple Minds in that period just before they went all stadium on us. There's big ideas running through their set, both musically and lyrically, bursting out at the seams, but they maintain control of it, preventing it spreading out into empty bombast. There's the insistent driving drumming that introduces Lose My Soul from their recent EP, a huge beast of a song, straddled with a dramatic breakdown that allows the two guitarists to let loose. 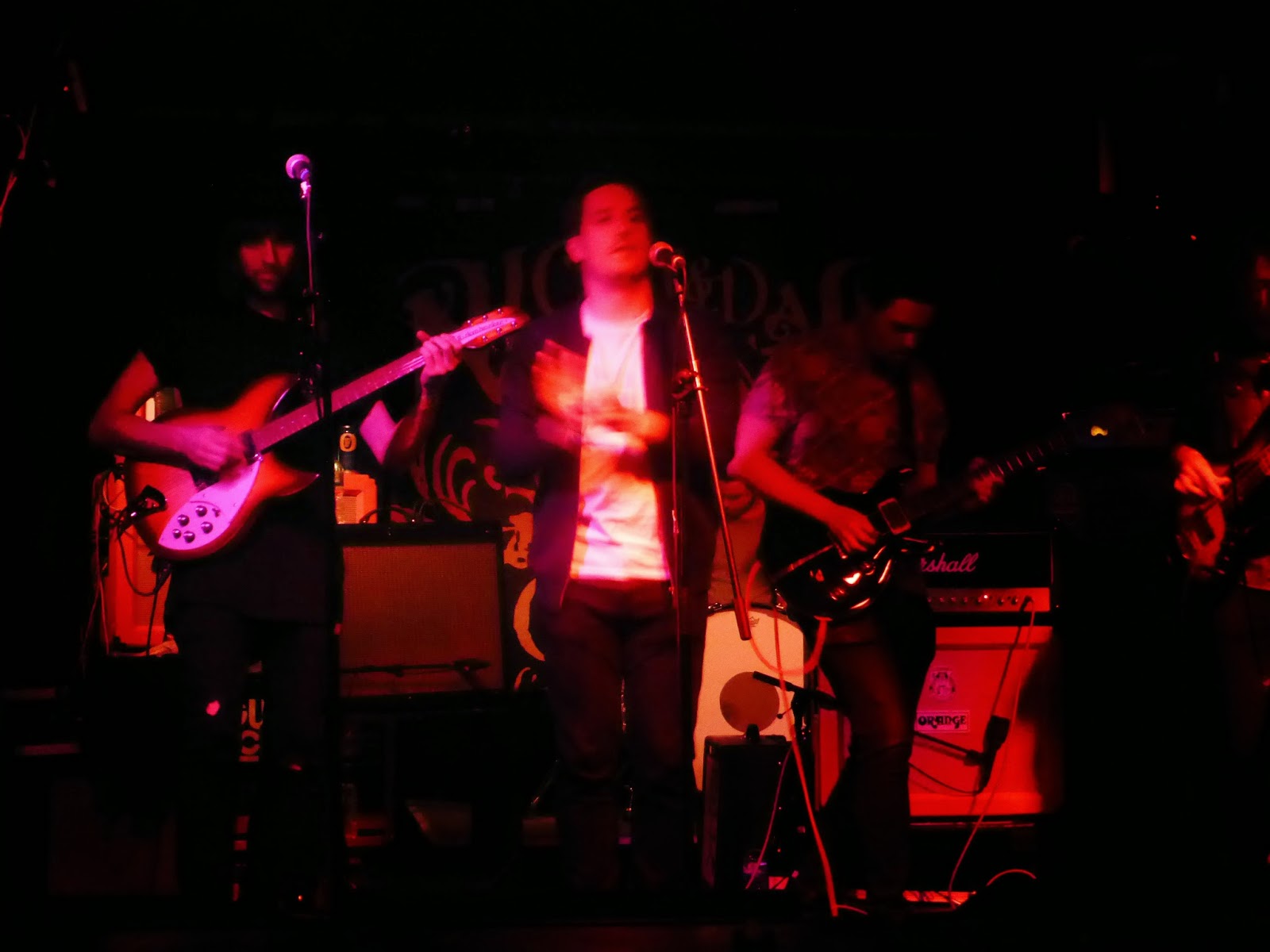 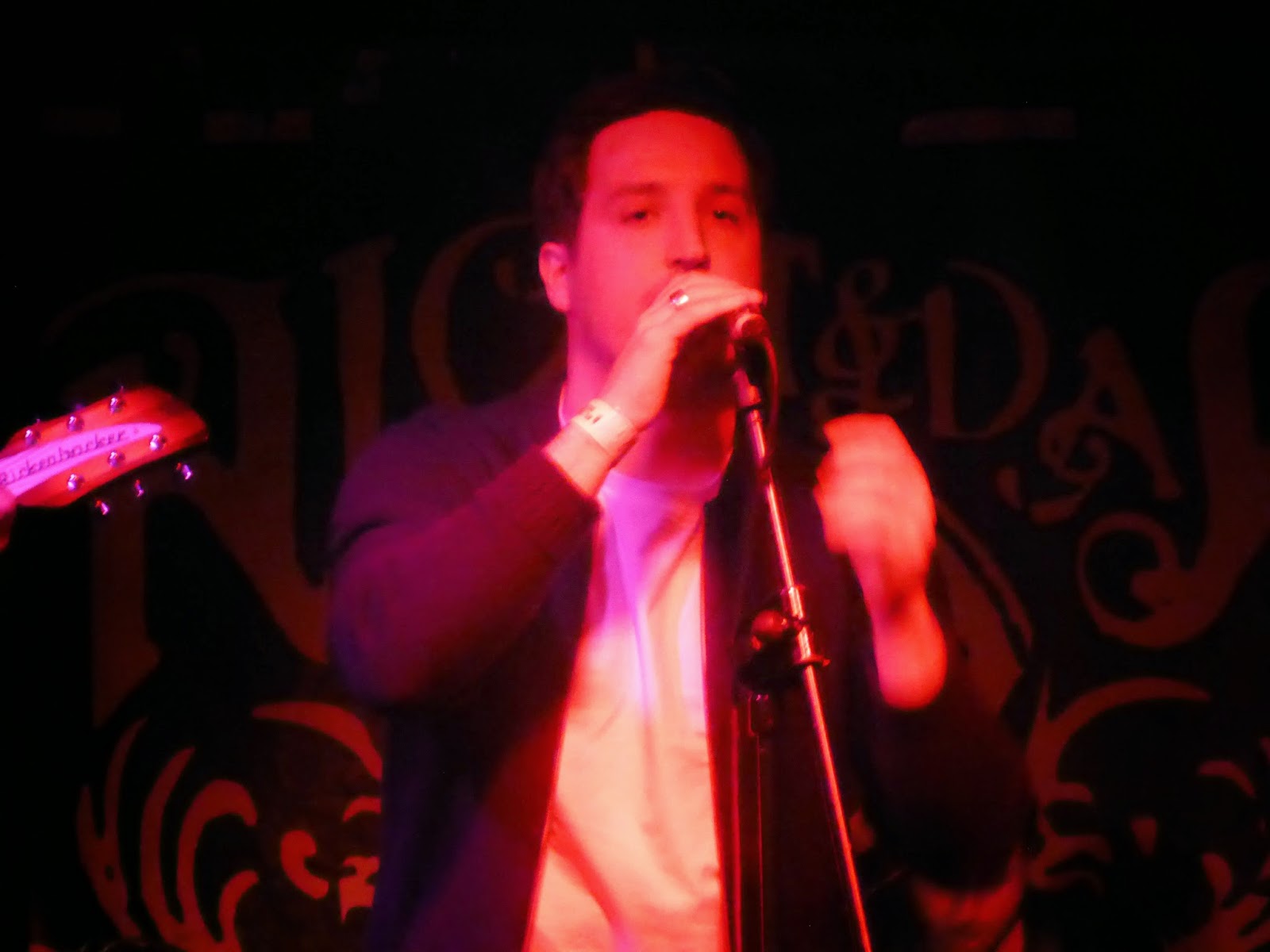 Front man Scott is an animated presence throughout, prowling the stage, lost in the moment of what's going on around him whilst the aforementioned two guitarists operate like two midfielders, one holding, the other rushing forward, interchanging at will, lifting the songs up into the stratosphere without losing control. Fade Away, another track from the debut EP, is another song that reaches for the sky and succeeds in getting there and Thieves, a song they recently uploaded, tips its hat to classic rock in its signature riff whilst retaining an individuality to it and demonstrating that they can trade in three minute hit and run songs as well as the brooding, epic majesty of the EP's lead track Celestial. Even that though is trumped by their set closer Too High To Die with its cinematic wandering opening, slowly building before exploding into life.  Du Dauphine have so many ideas, the trick they're going to have to pull off is to keep them all in check.

Next up are The Eyres from Crewe, a band we knew nothing about before their set, but who we'll definitely be checking out more of. A big guitar-led sound, a canny knack of producing just the right killer riff at the right point in the song, enough of their influences in their sound to allow a comforting familiarity and an immediate singalong quality, but with their personalities stamped across it in a way so many bands fail to manage. It takes a strong voice to work in these surroundings and front man Oli possesses such a voice, deep, powerful and to express itself through the wall of noise his bandmates create. 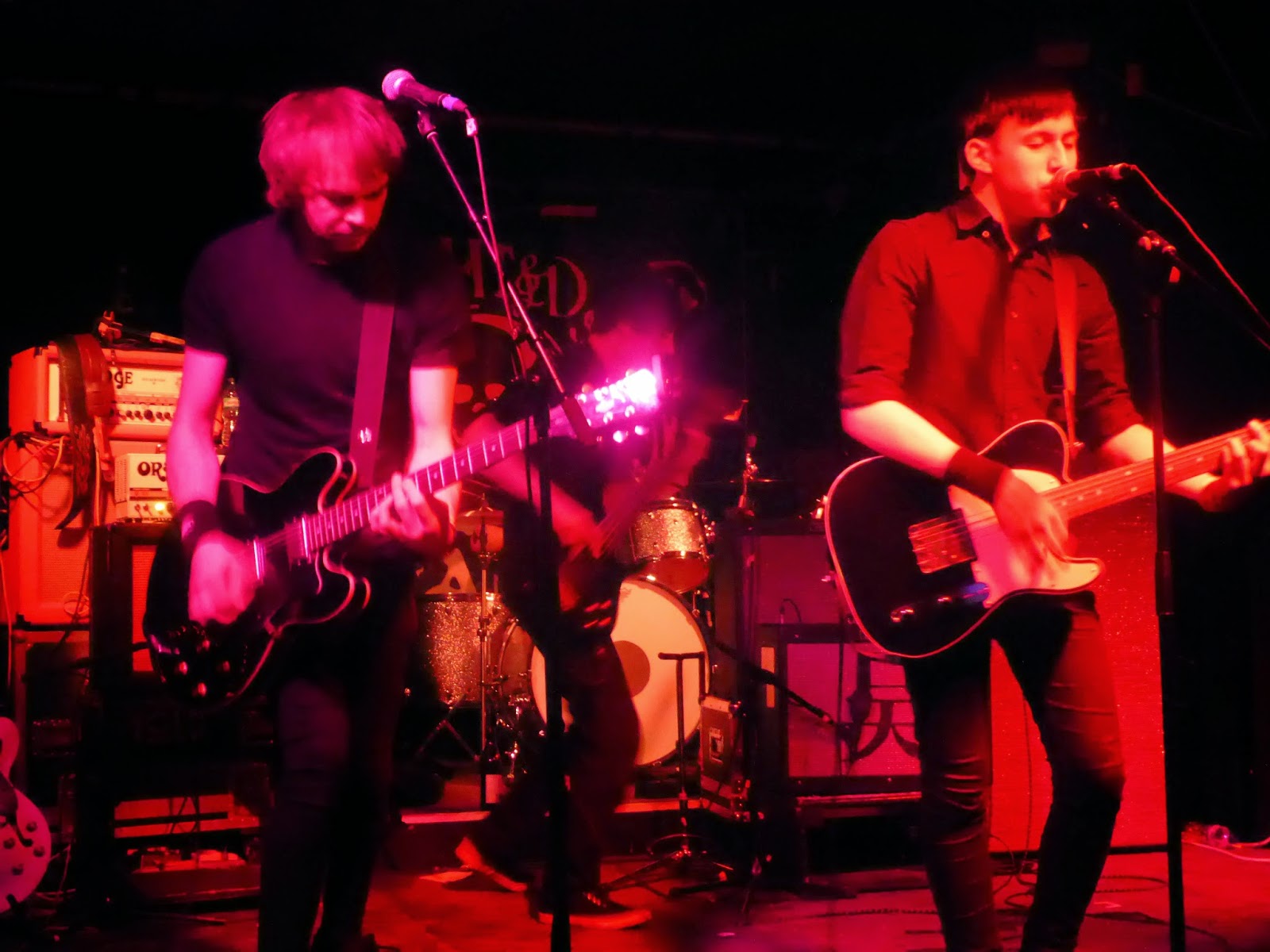 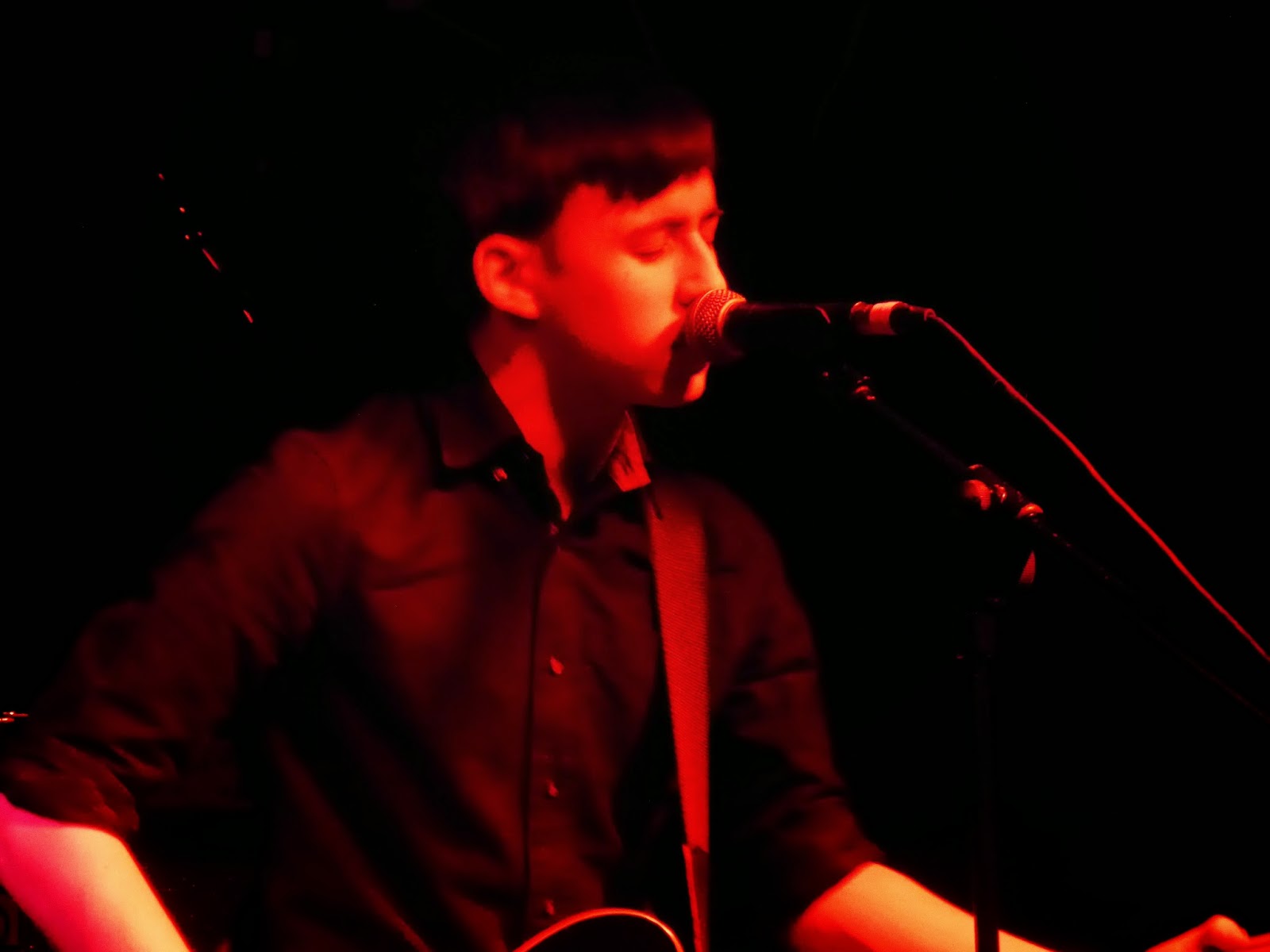 The third track they play, Light, showcases a softer sound, but then we're astounded by the next song, which we think is called Love Song, a brilliant three minute anthem that's made for radio and surely has to be their next single if it's not been out before as it could catapult them to much bigger things. It's followed by their last single Bleed, proof that their ear for a killer hook is well-formed, this is simple, yet brilliantly addictive guitar music that's both accessible and memorable. The Eyres are definitely a band to keep an eye and ear out for

The three bands have made it a very tough act for the headliner to follow, but Our Fold are a band that have been around for many years now and have a catalogue of songs that most established bands would be envious of. In fact their biggest problem is that they have so many songs that choosing which ones to play becomes an issue. They can do this without detracting anything from their fast, furious, in your face assault on the senses, they don't hold back as their twin guitars pummel the listener into submission, barely pausing for breath between songs, every one of them a potential single in the vein of last year's brilliant She Goes On, and even Damon's man flu can't slow them down. 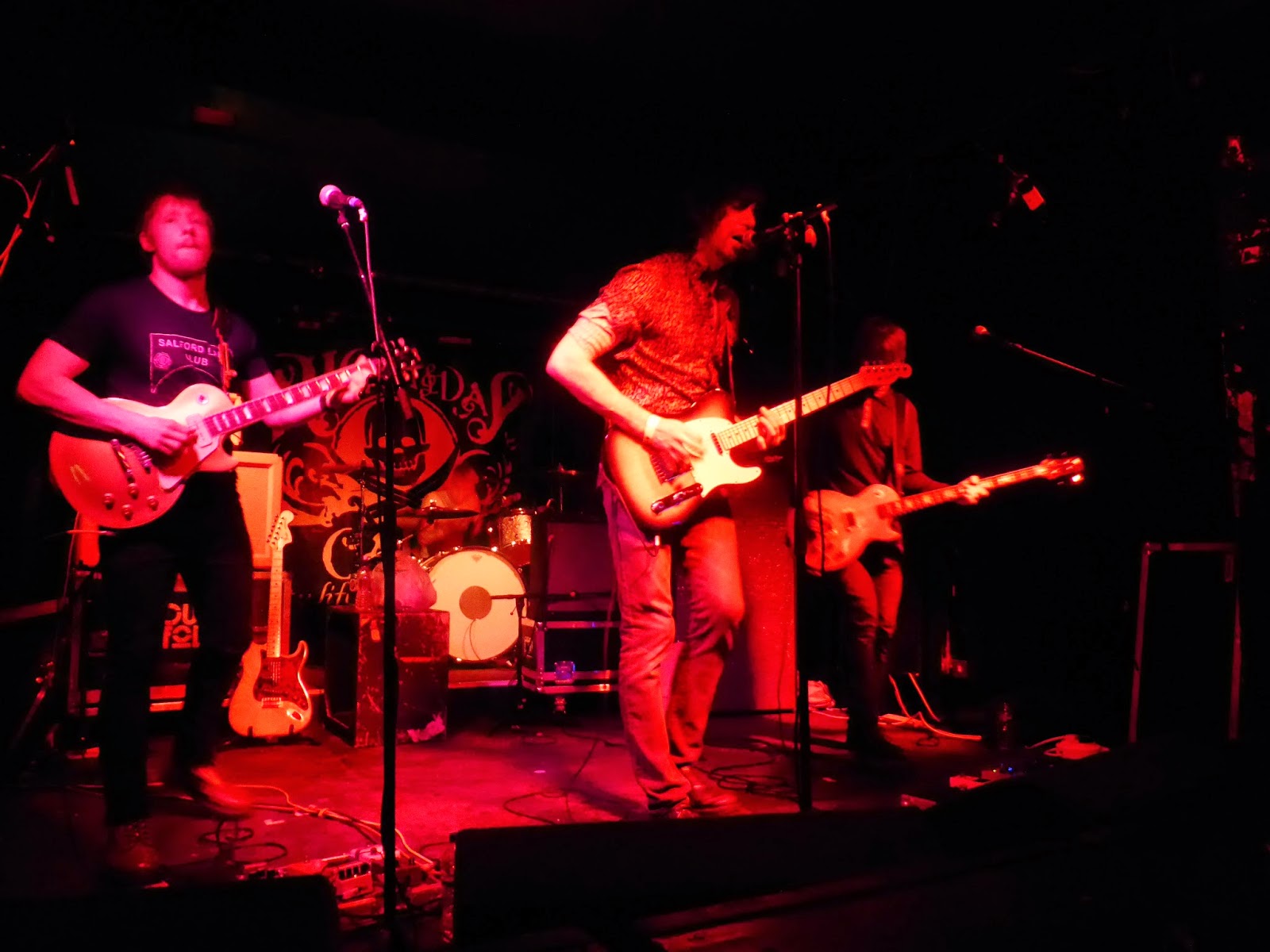 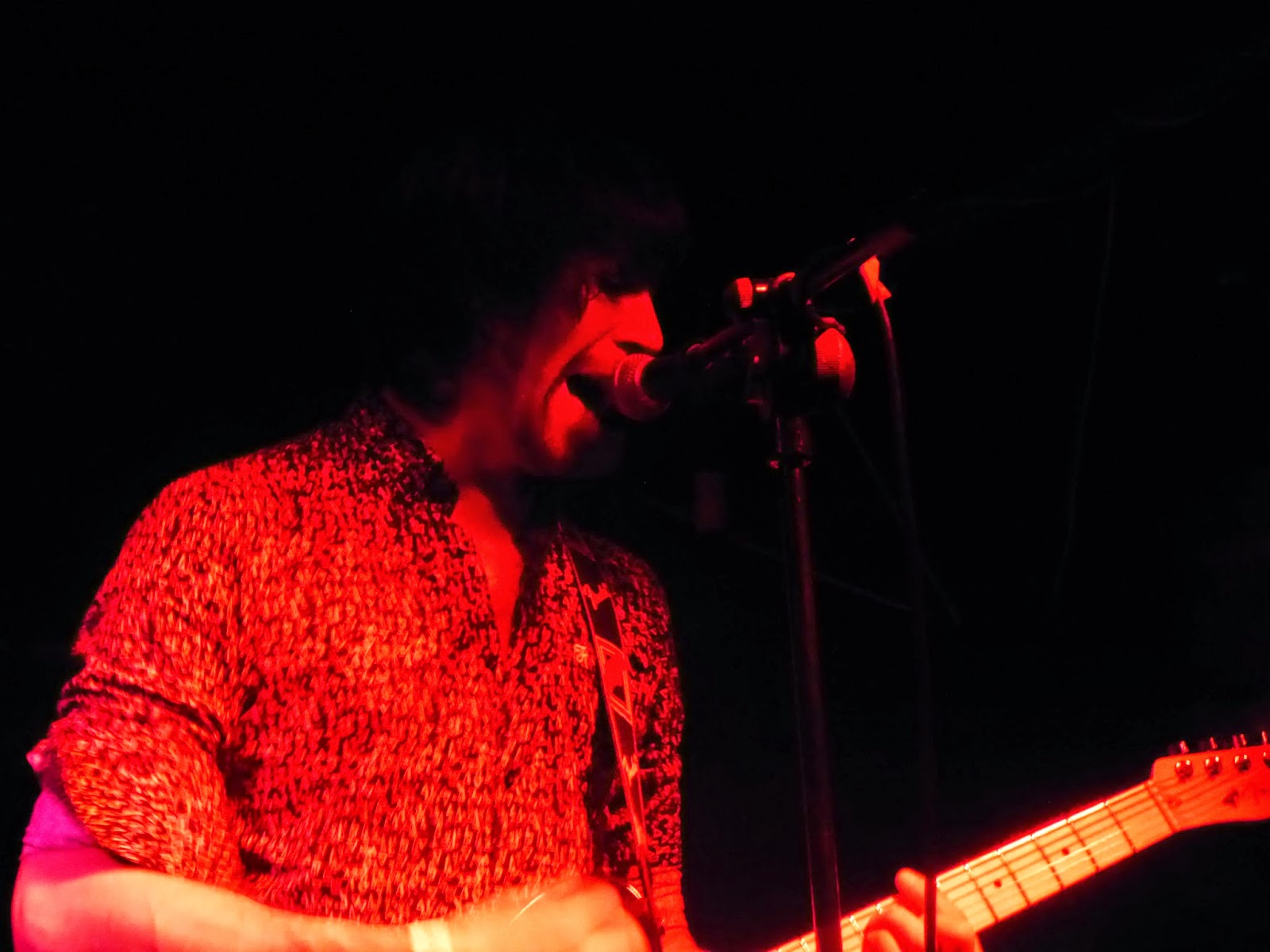 What tonight's set demonstrates is that the time's right now for Our Fold to make the next step up, record their album and put themselves out there to a wider audience both inside and outside the North West. Songs like Long Drive Home and the more reflective torchbearing anthem Terrific need to be out there now and not be Bolton's best kept secret. Their sound and its ambition has outgrown venues of this size and they need to move onwards to avoid getting stuck in a rut of playing the same places to the same people because they're too good for that and ready for so much more.

Du Dauphine are on Facebook, Soundcloud and Twitter and their EP is available from their Bandcamp site.

Email ThisBlogThis!Share to TwitterShare to FacebookShare to Pinterest
Labels: Du Dauphine, MRE, Our Fold, The Eyres