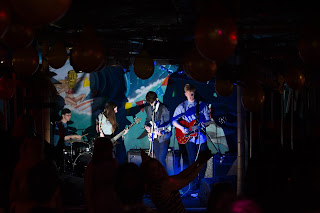 Lunar are a new four-piece from Manchester. This show, opening at the Zombie Shack, was their first ever gig - a short sharp burst of six songs weighing in just over 20 minutes - that showed both a love of the urban heroes of their hometown but also shades of great American alternative bands.

They open with just frontman Sam Carson on stage for a couple of solo tracks. We'd caught him recently at the Acoustica night at Apotheca, but with an electric guitar in hand, he's a much more confident proposition. Be Safe and To Be Alone make the inevitable and unescapable nod of any teenage boy with a guitar in Manchester to their demi-God Liam Fray. However, there's something different at play here, the latter hinting more towards those wonderful Definitely Maybe era acoustic b-sides that Noel Gallagher used to throw out seemingly without breaking sweat. 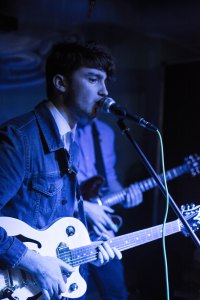 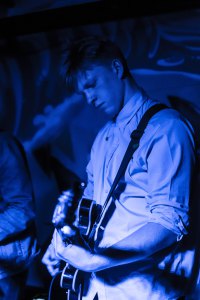 Sam's then joined on stage by the rest of the band - Luke on guitar, Christie on bass and Max on drums - and suddenly everything's transformed. They make a lot of noise, their first track, Intro, is an instrumental, a wall of guitars which segue into the squalling, choppy, quickfire riff of Come Home. We've seen plenty of first gigs before and this doesn't feel like one. They trade in songs built around short sharp bursts of drums and a natural chemistry between the guitars and bass - more Pixies and Pavement territory than anything from around here. Luke's guitar is slightly out of tune, but rather than making it sound bad, it feels like it's perfect for these songs.

Gonna Get You Down follows in a similar vein, Sam fighting to make himself heard in the cacophony that he and his band mates are creating. Christie adds backing vocals and their use of them will be interesting to hear as they write more songs as the two voices recall that classic Black and Deal interaction. 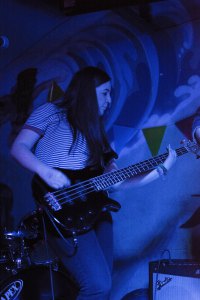 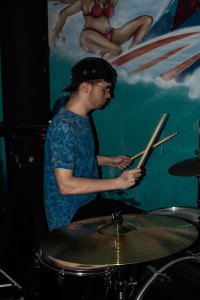 They finish with Our Way, their single that's coming out in August when they plan their first headline gig. It's a tantalising tease of what might come - it's got everything we've already talked about musically, but it has a chorus of "I don't care what they are saying, I just know that things will go our way" that captures a mood and feeling in the way Catfish And The Bottlemen in the last two months - a simple, everyman lyric that can mean anything or everything to anyone or everyone.

For a first gig this is an impressive outing. They're not perfect by any means, but there's a raw energy in the songs and in their performance and an approach that differs from so many bands on the scene at the moment that already marks them out as a band to watch.