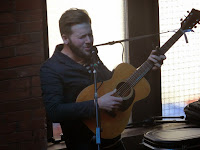 Liam Frost solo gigs are few and far between so when he announced a last minute show in Rawtenstall on Bank Holiday Sunday, plans were rearranged and we made the trip up the M66 to a part of the world we weren't too familiar with and were treated to an hour and a half of highlights from his two albums and the recent Wild Places EP as well as a couple of wonderful off-piste covers.

The Artisan is a wonderful little venue on the outskirts of Rawtenstall. There's clearly a lot of love gone into it as so many towns of this size have lost live music venues as they've become centred around major towns and cities, but the enthusiasm of the people running it has to be applauded and they've clearly invested in the sound facilities as well as ensuring a well-stocked bar. They're ambitious as well in terms of who they want to attract here, with Clint Boon doing a regular DJ slot and Liam's appearance is a coup for them. 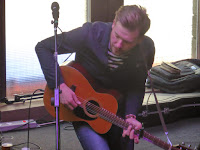 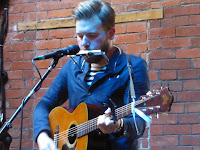 Liam's on good form, joking about everyone getting naked and kissing before he starts. He opens with Slow, Slowly Slow, a b-side of his debut single She Painted Pictures, and which in earlier days was one he was constantly heckled to play, but which has fortunately been included in most recent sets. Like so many of Liam's songs, it's a beautiful piece of story-telling as well as song-writing. He follows it with Wild Places, the title track from last winter's EP, which showed that his creative ability shows no sign of dimming and is hopefully a pointer for his third album when it eventually surfaces.

It's the songs from his debut Where The Spectres Dance that get the best reception, but the crowd downstairs is a generous and knowledgeable one, appreciating the fact that they're watching a special performance in a venue much smaller than Liam's used to playing in. Shall We Dance sees Liam play both guitar and harmonica and like If Only We Could Sleep which precedes it, stripped back to their bare bones, feel even more emotionally raw and charged than they've ever done. He plays A Fever And A Shifting, another b-side that we don't often get to hear which he tells us is one of his favourite songs he's ever written and then it drops into The Mourners Of St Paul's - for us his finest moment to date, such is the brutally honest exposure of one of the darkest moments of his life.

We get a rare acoustic appearance of Held Tightly In Your Fist, the single that could have catapulted his second album into the charts if there was any justice in the world. Skylark Avenue, which comes later in the set, confirms our belief that We Ain't Got No Money Honey But We Got Rain, despite its tongue-twisting title, will always be regarded as a classic by those fortunate enough to have crossed its path. 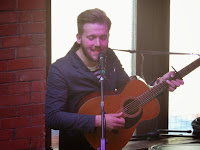 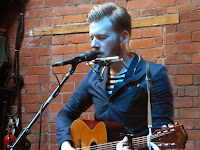 We're not big fans of covers, but when someone takes a song and completely reinvents it and turns it on his head, then they can be special, and we get not just one of them, but two. First up is Sade's No Ordinary Love, but it's the second that's the real showstopper. People don't cover Simply Red, it's not cool and Mick Hucknall has become a figure of fun, but some of their earlier material displays a wonderful understanding of the craft of songwriting and Stars, from the album of the same name, is a case in point, a genuinely beautifully love song. Peeled back to the bare bones of the song, it's an emotional outpouring untainted by the saccharine production of the original and, for those who aren't fans, Hucknall himself.

He finishes the main set with two tracks from the Wild Places EP. The Tokolosh project he's been involved in over the last two years has sated his need to express his rock side and therefore the newer solo songs exhibit the more fragile, stripped-down side of Liam's songwriting. When I'm Alone is a prime example of this, a guitar line so modest in parts that you can hardly hear it, but which allows him to express the emotion of the song through the range in his voice. Who's Gonna Love You, which ends the set, is in a similar vein albeit slightly more upbeat in style but without losing that

As the show progresses, things do start to get a bit tetchy in the crowd though. There's a group sat at a table on the balcony, chatting away unaware of how badly their voices carry, although they refuse to shut up when this is pointed out to them by different members of the audience, some more vocally than others. Liam tries to calm things down and promises to sing louder to try and drown them out. It almost ends in violence as one of them takes exception to the tone of one of the requests to pay some respect to the artist that's performing. Liam saves the day by running up the stairs to play the final song, Road Signs and Red Lights unplugged on the balcony to finally try and shut them up and prevent bloodshed. He's not even phased when one of their phones goes off mid-song and ad-libs around it. 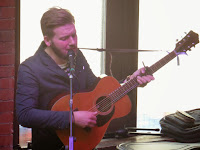 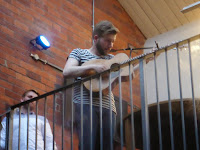 Liam engages with his audience throughout. Having moved just up the road he discusses public transport and the differences between here and the centre of Manchester where he used to live as well as name checking the local taxi firm Airwolf which has one of the audience trying to recreate the theme tune from the eighties TV series of the same name. He jokes he'll take advantage of the audience being drunk afterwards with CD sales, although he doesn't have any with him when he's asked. He explains the rationale for playing Stars as when he's recording he has to listen to music he doesn't like, including The Muppet Album, and that the chords of Stars are the same as a song he's in the process of writing.

Sometimes the best gigs you go to are the unexpected ones in unusual places. Tonight was a prime example of this. Liam was everything that was expected of him and more, although we didn't hear any "new" new songs, and the venue and audience, the ignorant few upstairs excepted, a wonderful surprise.

Liam played Slow Slowly Slow, Wild Places, If Only We Could Sleep, Shall We Dance, Held Tightly In Your Fist, No Ordinary Love, Is This Love?, Try Try Try, Skylark Avenue, A Fever And A Shifting, The Mourners Of St Paul's, When I'm Alone, Who's Gonna Love You?, Stars and Road Signs And Red Lights.

The video of Liam performing Stars can be viewed here.

Liam supports The Courteeners at Liverpool O2 Academy on June 2 and Leeds O2 Academy the following night (3). He plays headline shows at The Islington in London on October 28 and Manchester's Ruby Lounge on October 30.