The Nightingales - Mind Over Matter 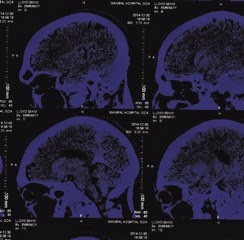 Mind Over Matter is the latest album by The Nightingales, a record that straddles generations and genres, the sound of a band that has something to say and isn't afraid to say it and say it directly whilst looking you square in the eye.

The Nightingales formed in the 1980s and recorded a series of albums before going their separate ways, reforming just after the turn of the century, undergoing a series of line-up changes before settling to a four-piece of charismatic vocalist Robert Lloyd and Alan Apperley on guitar from the original line-up augmented by Fliss Kitson, previously of Violet Violet, on drums and bassist Andreas Schmid. They've recorded at a pace that many modern bands would baulk at, Mind Over Matter coming out about a year after their last record For Fuck's Sake.

From the opening scream that ushers in the agitated For Goodness Sake, it's clear that Lloyd still has something to impart and isn't interested in simply rehashing old ideas.  Sure, the old punk ideals are there, he hasn't taken any of that grizzly rough edge of his vocal with age, in fact the opposite, his voice imparts a certain battered world-weariness, but rather than give in it to it, he fights it, sounding almost Leonard Cohen on the half-spoken half-sung Ripe Old Age and heading into Bowie territory on I Itch. But it's when his voice contrasts with Fliss's backing vocals, often sounding like they're singing two different songs and fighting each other to be heard, as on the end of The Man That Time Forgot, I Itch and the chaotic hundred and five seconds of But or the start of Taffy Come Home that the record feels at its most vibrant, most alive and shot through with a modernity, an energy and vibe that so few young bands of today would even dare contemplate yet alone commit to record. 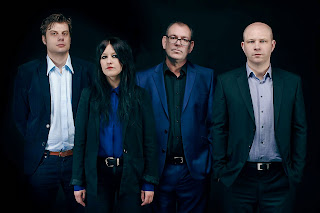 The sound of the record is intriguing too. It's just guitar, drums and bass for the most part, but they create so much variety from it, quite often in the same song, even the same verse at points. The production is very simple, instinctively clear and crisp, so that every note, every little nuance and spark of raw energy and emotion is accentuated. They even experiment mid-album with an instrumental, For Different Folks, that sounds like the soundtrack of a dark horror movie, menacing and haunting in equal measure as it reaches its conclusion of birds chirping as the music drifts away and it's followed by Stroke Of Genius, where Fliss sings something barely comprehensible just under the mix over a cyclical repetitive hook, that shouldn't work, but is absolutely in keeping with the ethos of the record.

Gales Doc is an odd one though, a mix of a radio presenter introducing the band and explaining their songwriting process set to music and Great British Exports is the closest they come to The Fall comparisons that get thrown their way, but the observation in the song and the references to fighting wars for political aims, Midsomer Murders and Mumford And Sons suggest this is much more articulate in its execution.

At a time when so many bands from the eighties that have reformed or have hung around are stuck in a rut, trying to relive their past, The Nightingales are, in their own world, almost oblivious to the mechanisms of the industry, foraging their own path, bringing their trademark sound right up to date. It's a record full of caustic observation, dark humour and a real sense of having something to say and not being afraid to say it. The interaction between Lloyd and Kitson is fascinating and at the centrepoint of the record.

Mind Over Matter is a melting pot of different sounds and ideas, retaining its link to the band's punk roots, but so rich in its diversity, jumping from point to point without stopping for breath, that it's an at times difficult, but ultimately exceptionally rewarding, listen.

They tour Mind Over Matter at the following dates :