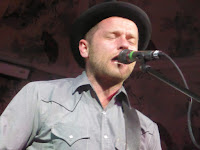 Four guitars, one bass, two sets of drums, one operated remotely by foot pedal, a piano, two electronic drum pads, one tambourine, one shaker and a plethora of loop pedals and electronic gadgetry make up the impressive array of equipment on stage yet it's all operated by one man as David Ford brings his One Man Band tour to the Deaf Institute in Manchester. It's by far his most ambitious set yet, but he pulls it off against the odds, confirming his place as a unique, yet criminally ignored artist.

Tonight's gig is split into two sets for the benefit of us all.  For us, it grants us a much longer set than we’re accustomed to from Ford, but also gives us pause for thought in the middle at what we’re witnessing, to discuss just how he manages to use so much instrumentation in a song and time it right (although he modestly claims technical issues we don’t notice them).  For him, it gives him pause for breath from the mammoth undertaking of making this whole thing work. It's one of the most stunning gigs we've seen in a long time in its ambition, complexity and power.

Songs are stretched out as he builds them up, instrument by instrument and it's intriguing to listen as the layers are added, especially the exceptionally funky bass that's added to a number of the songs for probably the first time. By the time he starts singing the opening track, the politically charged Song For The Republican Convention, he's already got five instruments on the go and it's a theme that follows through the first half as he carefully constructs each song.


It allows him space to revisit his back catalogue of albums and EPs which is all represented tonight and reinvent songs that aren't necessarily his best-known. It's The Economy Stupid is a brilliant song from one of his depth of EPs which is preceded by the tale of his short stint studying drama at Manchester University and an educated articulate rant at the way immigrants are blamed by the likes of the Daily Mail for driving down British wages when actually it's big business championed by the likes of those capitalist hate-mongering rags (our words not his) jumping on the opportunity and not paying people a living wage whilst they’re making millions. Whilst so-called people's champions wring their hands at the lack of modern protest songs about the current political situation, here’s a scathing critique of how the economy and society works that doesn't just hit the nail on the head, it hammers it through the boards but is ignored because the guy who wrote it happens to be quite well-spoken and with a modest upbringing from the Home Counties. 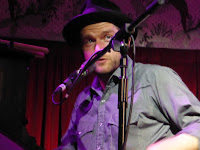 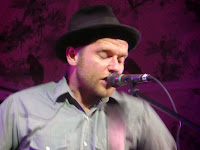 It isn't all politically charged torch-bearing protest songs though, Ford's set revels in introspection too from the decade-old I Don't Care What You Call Me and Don't Tell Me from his extravagantly titled debut I Sincerely Apologise For All The Trouble I've Caused and the thoughts of what life might have been like if the only Irish pub and favourite haunt of the teenage Ford in his hometown hadn't shut down of O’Sullivan's Jukebox. He takes a look in the mirror for the honest career self-assessment of the imperious Everytime and the closing note to self Cheer Up You Miserable Fuck, which ends in the two hundred or so in the Deaf Institute raising the roof for the refrain before Ford bashes the living hell out of every piece of kit before hitting the pedal and almost fittingly given the vast array of instrumentation used, finishes with just his voice.

There's also the relationship questioning of One Of These Days, a beautiful song that could get mistaken for a love song until you listen to it, and the caustic Throwaway, yet it's not all doom and gloom as he seats himself on the piano stool, turns off all the effects pedals, and delivers a simply awe-inspiring love song To Hell With The World, which cuts through and transcends all that's wrong with the world with a simple declaration of love. 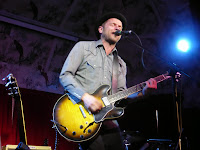 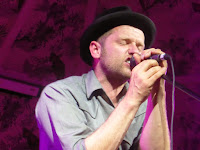 This is a truly phenomenal undertaking from a man who tours regularly and never fails to astound the loyal audience he's built up over the years with something new - a string section last time, a trio of musicians supporting each other the time before, and here yet again excelling himself on his own on a stage so full of gear it's almost impossible to move around it. Hopefully one day he'll get the recognition he deserves, even if it's only critical rather than the financial that seems to drive so many in the business these days, because he is the most unique performing artist out there at the moment, modest to a fault, with a brain that works overtime to think up these ideas and the ability to transform them into thrilling musical and visual reality.

David Ford played Song for The Republican Convention, The Ballad Of Miss Lily, I Don’t Care What You Call Me, It’s The Economy Stupid, One Of These Days, Don’t Tell Me, Let It Burn, O’Sullivan’s Jukebox, Panic, Throwaway, Medicine Show, Waiting For The Storm, State Of The Union, To Hell With The World, Everytime and Cheer Up You Miserable Fuck.