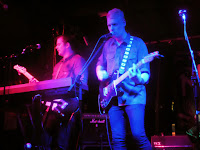 Wall Market Racketeers were one of our tips for 2015 on the back of last year's debut Invisible Ink EP. They're back with a new single Saturnine from a forthcoming EP and to launch it they headlined the Night And Day. We caught up with them to see how they've developed since we last saw them back in August.

They open the set with Saturnine and it's clear that they've worked on a much heavier, beefed up sound than previously. With three guitars and a bass as well as the drummer who made his debut the first time we saw them last year, they replicate the sonic assault of the recorded version. Disaster almost strikes as a guitar string snaps, but after a quick changeover they then move into previous single The Distance Between. Alex introduces it as them owing a debt to Interpol for the song (he later says the same about Firesale and Manic Street Preachers) which we think's an unusual thing to do because Wall Market Racketeers are no copyists, this is a sound of their own and they're forging a path so few are doing these days - articulate, intelligent social commentary - we'd argue Firesale is more pertinent assessment of the ills of society and the "free" press than the Manics have given us in two decades. 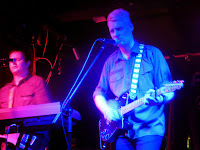 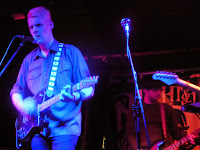 They're not afraid to inject a little humour either, Alex joking that Cognotive Dissonance is a fan favourite that we can sing along to whilst they battle further technical issues between songs. This track is more reflective and true to the mood of the debut EP from which it came as it closes on a solitary piano line. Next up is a new song, albeit one of the first they'd written but which they'd played little. The Insiders, The Outsiders And Me sees them return to the bold, big guitar-led sound of Saturnine and suggests that this might be the direction their new material will head. They then do a cover, but it's probably the only time Hope Of The States have been covered in this building. The Red, The White, The Black And The Blue is ushered in by a wall of fuzzy guitars and the cover is true to the spirit of the original, striving to be a widescreen stadium-filler, but also retaining a quaint intimacy and they put their own mark on it as well.

They finish up with Weltschmerz, which Alex tells us they're re-recording for the forthcoming EP. They bring out the lapsteel for this and the way the song has developed suggests that Wall Market Racketeers are a band that's constantly evolving, changing their sound to challenge themselves. They'll be fascinating to follow over the next twelve months and see where their path takes them.

Wall Market Racketeers played Saturnine, The Distance Between, Novella, Firesale, Cognotive Dissonance, The Insiders The Outsiders And Me, The Red The White The Black And The Blue and Weltschmerz.