Track Of The Day : Frankie And The Heartstrings - Save It For Tonight 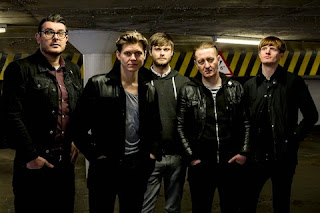 It's been a while since we've heard from Frankie And The Heartstrings as they've been working on a new album as well as setting up a record shop in their native Sunderland. However, they've recently revealed a new track Save It For Tonight from an album called Decency that is coming out in July and ahead of that they've embarked on a UK tour which calls at the Night And Day in Manchester tomorrow (May 11).

Save It For Tonight bears all the hallmarks you'd associate with them, a pummeling drum beat, short sharp blasts of guitar and the inimitable vocals of Frankie.

Frankie And The Heartstrings' official site can be found here. They are also on Facebook and Twitter. They play Manchester Night And Day on Monday 11th May with tickets available from here.

Their tour takes in the following dates :

Email ThisBlogThis!Share to TwitterShare to FacebookShare to Pinterest
Labels: Frankie And The Heartstrings