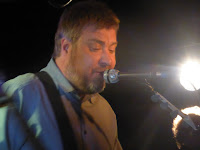 It's a fitting farewell to the established Manchester venue The Roadhouse that Jimi Goodwin played one of the final gigs here. Part of that other Manchester holy trinity of Elbow, I Am Kloot and Doves, the venue plays a part early in their legend and tonight's show is a charity show for Christies in memory of Steve Lloyd, owner of The Roadhouse until his untimely death a year ago.

Since Doves went on an indefinite hiatus (or split up, who knows for sure) a couple of years ago, Jimi has forged a solo career and released his debut album Odludek last year to rave reviews. Whilst exploring new territory sonically in parts, it also demonstrated that Jimi's unmistakable voice is still in fine fettle and he hasn't lost the ability to craft damn fine tunes that might lack the immediacy of Elbow, but which appeal to the more discerning listener. 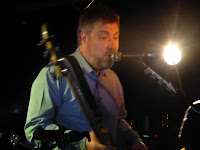 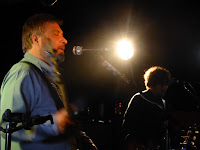 Tonight's set mainly features tracks from Odludek with Doves tracks interspersed liberally within it - the singles Kingdom Of Rust and The Last Broadcast as well as album track The Sulphur Man getting a rapturous response from the opening bars and throughout. However, it's the solo material that really impresses tonight from the opening Terracotta Warrior and Didsbury Girl, the standout track on Odludek and a song on a par with anything Doves produced in our view, which make an appearance early in the set. The middle section of the gig is equally impressive where the likes of the country-tinged Live Like A River and Oh Whiskey! with its signature opening acoustic strum and mouth organ section have the rapt audience singing along to every word. The songs are stretched out to allow the band to breathe new life into the likes of The Ghost Of The Empties and Man vs Dingo as well as introducing Noughts And Ones and The Phone Call that don't appear on Odludek which hints at a second record on its way.

There's an intimacy to the gig that gets lost in bigger venues or even some of the more soulless smaller ones. The Roadhouse has definitely seen better days, the stench emanating from the gents means it's a proper toilet venue, but it's our toilet and its loss will only really be felt once it's gone. The irony is sadly that it's happening just after it had got a new booker who'd started to resurrect it as a live venue. Of course the sound is a bit hit and miss and because it's packed vantage points aren't always great, but that was almost the appeal of the old place - it feels real in a world that's becoming increasingly sanitised. 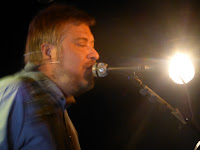 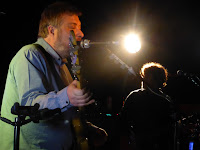 Jimi appreciates this, with many real family in the audience and the community family making up most of the rest. Before The Phone Call he talks about his memories of Ancoats and Beswick as a child growing up visiting his grandparents. He reminisces about great gigs he's seen in the venue and asks everyone to shout their favourites, he recalls the legendary phrase "he's a nice man but his shit stinks" which has sadly somehow gone out of common Manchester parlance and laughs off an optimistic request for an acoustic version of the Sub Sub classic Spaceface.  He's presented with a birthday cake and a rousing chorus of Happy Birthday half way through the gig. With Jimi playing shows this good and Black Rivers also impressing, it's difficult to see a Doves reunion in the foreseeable future.

But tonight is about the venue. Whilst the demise of The Roadhouse is a sad time for music in Manchester, tonight's gig is a fitting way to bring down a curtain on our visits to there.  It's great to see the old place full, people entranced by live music and one of the city's favourite sons playing his smallest gig for a long time.

Jimi played Terracotta Warrior, Kingdom Of Rust, Didsbury Girl, Live Like A River, Oh Whiskey!, The Phone Call, The Ghost Of The Empties, Noughts And Ones, Man vs Dingo, The Sulphur Man, Panic Tree, The Last Broadcast and Lonely At The Drop.