Frankie And The Heartstrings - Manchester Night And Day - 11th May 2015 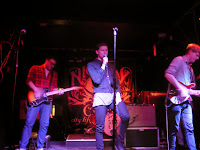 Ahead of the July release of their third album Decency, Frankie And The Heartstrings are on a UK tour to preview tracks from the album as well as revisiting some old favourites after a hiatus where they’ve set up a record shop in their hometown and undergone a line-up change. We caught them at the Night And Day in Manchester.

Opening the set with recent internet reveal track Save It For Tonight, it’s clear that Frankie And The Heartstrings have remained true to the values that have given them a loyal, if not huge, fanbase. It’s a three-minute short sharp shock on the senses, a dual guitar onslaught with an intuitive knack of delivering a killer hook on every song, hard driven rhythmic drumming that dictates the pace of the songs and genuine heartfelt emotion pouring from the sinews of every word Frankie sings, whether he be perched precariously on the stacks at the front of the crowd or prowling the stage.

That musical chemistry infuses itself into the between-song banter as well. They’re clearly best mates as well as band mates.  Drummer Dave, so far back on the stage such is the layout of the venue, chimes in repeatedly at the end of each song, greeting Manchester as “home of The Beatles” and possibly inappropriately adding “you didn’t get caught” to the end of telling Frankie he sounds like Rolf Harris at the end of one song.  There’s the inevitable banter about football, especially as one of them is a Manchester United season ticket holder. 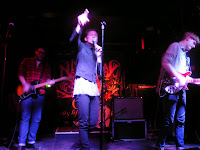 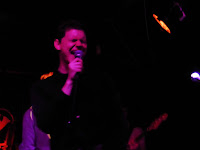 The new songs already feel at home in the set. They don’t stray too far from the ethos that has served Frankie And The Heartstrings so well over the course of their two albums to date Hunger and Days Run Away, but without two songs ever sounding the same or the energy in the songs ever dissipating. The likes of Berlin Calls, Someday Anna and title track of the new record Decency actually feel more frantic, urging, searching than their predecessors.

Weighing in at forty-five minutes it’s a hit and run set that touches all bases of their catalogue so far, six of the tracks coming from Hunger getting the most ecstatic reaction, but there’s a feeling in the new songs that suggest – in particularly the title track and the “best new song” Think Yourself Lucky – a big, ballsy romp that turns the volume up a notch - that they’re about to release their best record to date.

Frankie And The Heartstrings are a national treasure, from their own Pop Sex label through the setting up of their record store in their hometown and the big name in-stores they’ve secured and the dry caustic humour of the “f**king mug” (expletive not censored) Simon Cowell mugs on their merch stall. With all that, it’s hard to forget that they’re also one of the most fun, engaging bands around with a knack of seemingly effortlessly producing great guitar pop songs.

Frankie And The Heartstrings played Save It For Tonight, Possibilities, Tender, That Girl That Scene, Ungrateful, Berlin Calls, Photograph, I Still Follow You, Decency, Someday Anna, Hunger, Think Yourself Lucky and Fragile.

Frankie And The Heartstrings' official site can be found here. They are also on Facebook and Twitter.

Their tour takes in the following dates :

Email ThisBlogThis!Share to TwitterShare to FacebookShare to Pinterest
Labels: Frankie And The Heartstrings