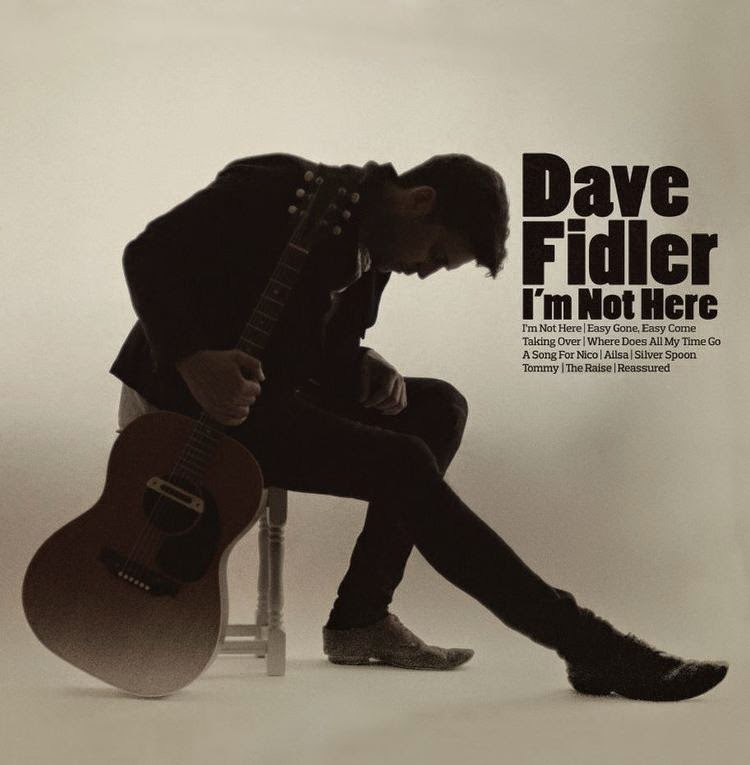 Dave Fidler releases his superb debut album I'm Not Here with a launch gig at Manchester's Whiskey Jar tomorrow night.  He took time out to walk us through each song on the album.

It’s the title track of the album.  I came up with the music for it and had a whole other song over the top of it, but wasn’t happy with it.  But I had that melody stuck in my head and couldn’t get it out.  I’d seen a guy called Mano McLaughlin from Meadow years earlier at the In The City Festival when I was scouting for Massive UK and I’d put him on a compilation album called I Love Manchester. We stayed in touch and emailed him the track to see if he wanted to write on it.  He sent it back within a day with what you hear now on I’m Not Here and a different take on the melody which I really love.

It’s about that weird headspace you find yourself in after losing someone you love.   It’s about a transition period and that resonated with me.  So I’ve done a few gigs with Mano, where I’ve sang with him and him with me and we do that one together and decide who sings it on the night.

This is a nod to my Dad passing, but we found out that we were going to have Dylan (his son) a week after, so it’s about life replacing life. The content of the song is more about just after when Dylan was born and I haven’t done much with it since then.  There’s a couple more verses that I’ve cut out because it would have gone on too long.

It’s about Dylan, he was named after Bob, and it’s about him being a free wheeler throughout his life and what he’s going to do, just giving him the freedom to do what he wants.   It’s written for him to listen to in a few years time. He’s kicked off with me for it at the moment, but I hope he’ll listen back to it.

I wrote this when I got into blues slide stuff.  I came up with the tune and I was chatting to my brother and he came up with the concept of “trees in the garden that come from seed” so it’s down as a co-write.  It’s about getting old and the next generation taking over.   He came up with a couple of lines that I based the rest on.  I wrote that about a week before I recorded the album, I wasn’t sure about the lyrics at first, but they’ve settled in now.

WHERE DOES ALL MY TIME GO?

This is one I wrote a few years ago and was about a place that you find your head in when you’re in between things.  I tend to write a lot about that (laughs). Sometimes you sing lyrics, I wrote the song in the studio with a guy called Ed White who’s a great producer who did Bottom Dollar and he asked if I wanted to come in for a session.  I came up with the guitar part and he told me to sing whatever I wanted over it and most of that lyric came from that.  I didn’t know what they meant at the time, but listening back a few months later it was fairly obvious. I think that sometimes happen.  That was about realizing it was the direction I was going in and it came naturally.

A SONG FOR NICO

This is fairly obviously about someone and that’s my daughter.   We were told that there was a high probability that she would be born with health issues, and may not survive.   It’s amazing the amount of emotions you go through whilst waiting to find out.   She was originally going to be called Lucille, but Nico means Victorious and, of course, it’s a nod to the Velvet Underground.   It’s another one I wrote a week before I recorded the album and another on-the-spot song. I came up with a melody and I felt I needed to write a song about that situation.

It’s about when the odds are stacked up against you, not giving up, pushing on and coming out the other side.  It was a beautiful moment when she was born and there was nothing wrong with her.  She’s perfect.

There was a time at York and a woman burst out crying in the front row when I played it and then a couple more did.  Each of them bought the cd and told me they had been through something similar and got the feeling of the song.  It meant a lot to have captured something that also meant something to someone else.

This is the song I’d thought about the longest on the album.  I had the melody and I’d had the guitar line for about six months.  Quite a lot of songs revolve around personal situations I or my family have been through.

Without giving too much away it’s about someone really close to me who has been through a lot, situation after situation that would be life-changing on their own for some people.   So the song is a tribute really.  The title means island in Gaelic, which evokes that feeling of being alone.   When you feel like you can’t do anything to help someone other than to be there, that’s what this song is.

Hopefully people will be able to relate to it.

This one has been around a while. It’s a nod to Peter Green’s Fleetwood Mac and how I got into open tunings.   It’s not really about anything other than looking at someone as an observer and knowing they’re going to be OK and will land on their feet, because they always do.  It’s about them not necessarily realizing it.

I took the first half of a Tommy Emmanuel song called Stevie’s Blues and then improvised the second half of the song.  This one has held up the album more than any other as I had to contact Universal and Cobalt Music to tell them I was going to do it and they’ve both said I’m fine to use it. It’s good to have the connection to Tommy as I’ve spent a lot of time focusing on his style and that of Chet Atkins. It’s more a bit of fun that song.

This is a song I wrote with my other brother Andy. It was originally his song that I adapted to a more finger style approach. He came up with the idea of the song and I put the melody to it.  It’s his lyrics, you’d have to ask him what it’s about.

This is a song I wrote in 2007 and it’s the oldest song on the album.  On the album I play a lot of blues stuff and I wanted a mellow end to the album. I think it’s obvious what it’s about when you listen to it.  Someone’s at the end of a broken relationship and they basically need someone to reassure them.

That was nice to record it as I did it on an old nylon-strung acoustic guitar that’s been passed down through the generations from the other side of the family.  Jo’s dad gave me that guitar and it has his name engraved in the back, it’s a lovely guitar and I felt I wanted to do a song with it.


Our review of the album can be found here and a full in-depth interview with Dave here.

Dave Fidler's website can be found here and the album can be pre-ordered on CD and vinyl from there.  He is also on Twitter and Facebook.   Tickets for the launch show can be purchased here.