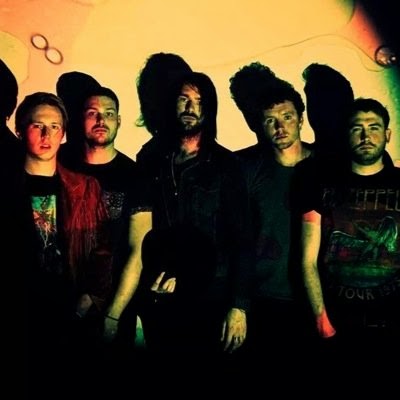 Kobadelta are a five-piece from Newcastle who play what they describe as "dark and brooding indie-psych-rock". They've just released their new EP Remain Distracted.

Kobadelta are Dominic Noble on vocals, Alex Malliris on guitar, Chris Malliris on drums, Jon Massey on bass and Jordan Robson on synths.

The band had known each other for years from school, except Jordan who Alex and Chris met whilst working at Tesco.  They were formed in 2010, but 2014 has seen an upsurge in their fortunes, cumulating in the release of the EP, their third following February's The Hidden Door and 2013's The Ritual.  They describe the new EP as "the best representation yet of what we consider to be Kobadelta's 'sound' after experimenting with a range of ideas on our last few releases."

Guitarist Alex explains why it took three years for them to release their first material. "The band was started totally from scratch, as in Chris had never even played the drums, so the first 2 years were really just about us finding our feet and was almost us just messing about. There's been the odd line-up change, but the line-up as we have it now with Jordan playing synths and Jon on bass came about at the start of last year, and that’s really when things have started to get moving and we've started to take it a lot more seriously."

They've supported the likes of Temples and Superfood and were chosen to play at Newcastle Emerging Evolution festival as well as sharing a bill with Happy Mondays and Public Enemy at Stockton Weekender and recording a session for BBC Introducing.

EP track Repetition is available as a free download from their Soundcloud page.  The two songs below were recorded by Gabrielle Sidaway at their recent EP launch at the Star And Shadow Cinema in Newcastle at the end of September and captures the growing buzz about them in their hometown.

They play The Mink in Middlesbrough on October 30.

The EP is available on CD and download from their Bandcamp site.

Email ThisBlogThis!Share to TwitterShare to FacebookShare to Pinterest
Labels: Kobadelta