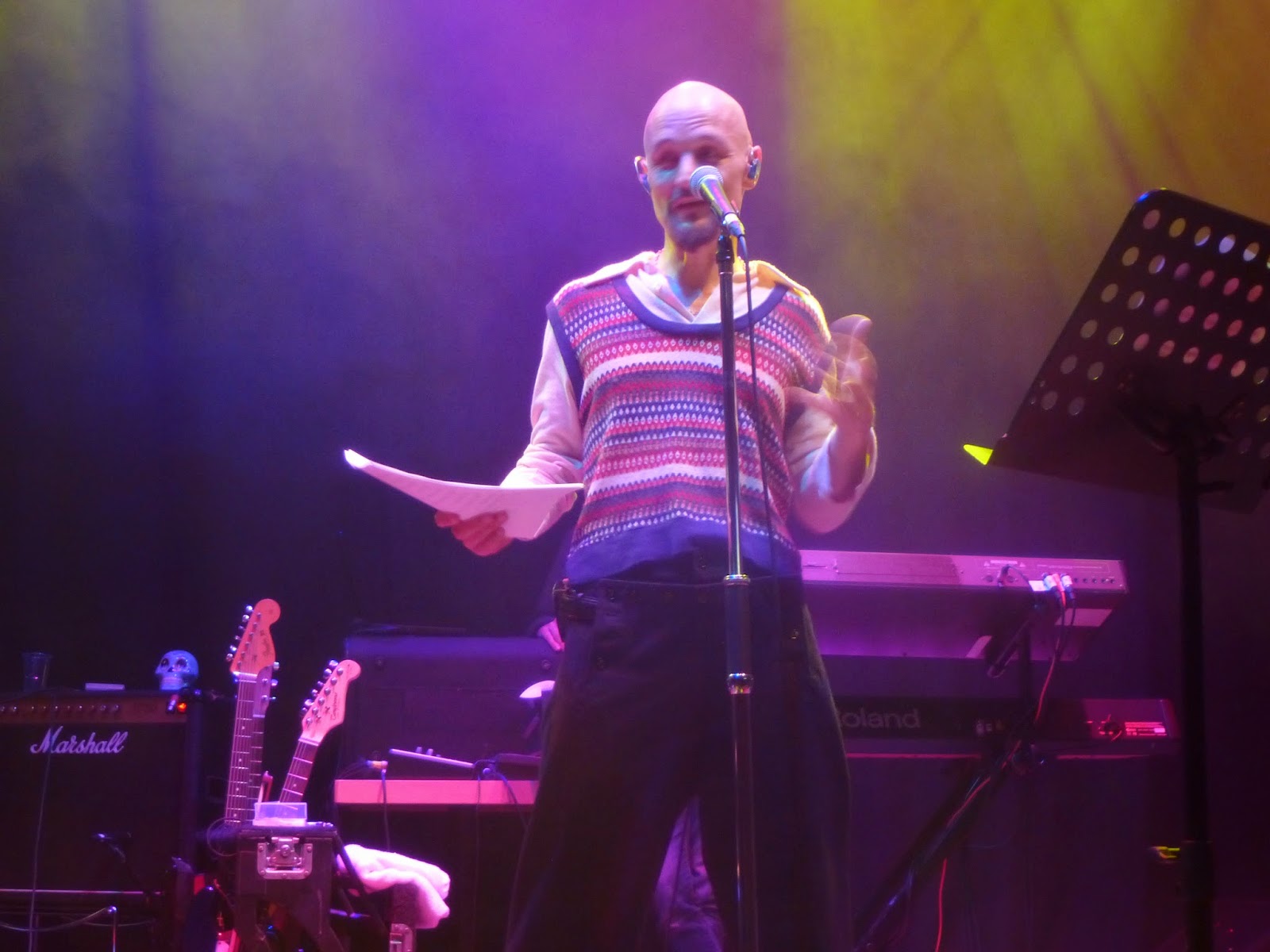 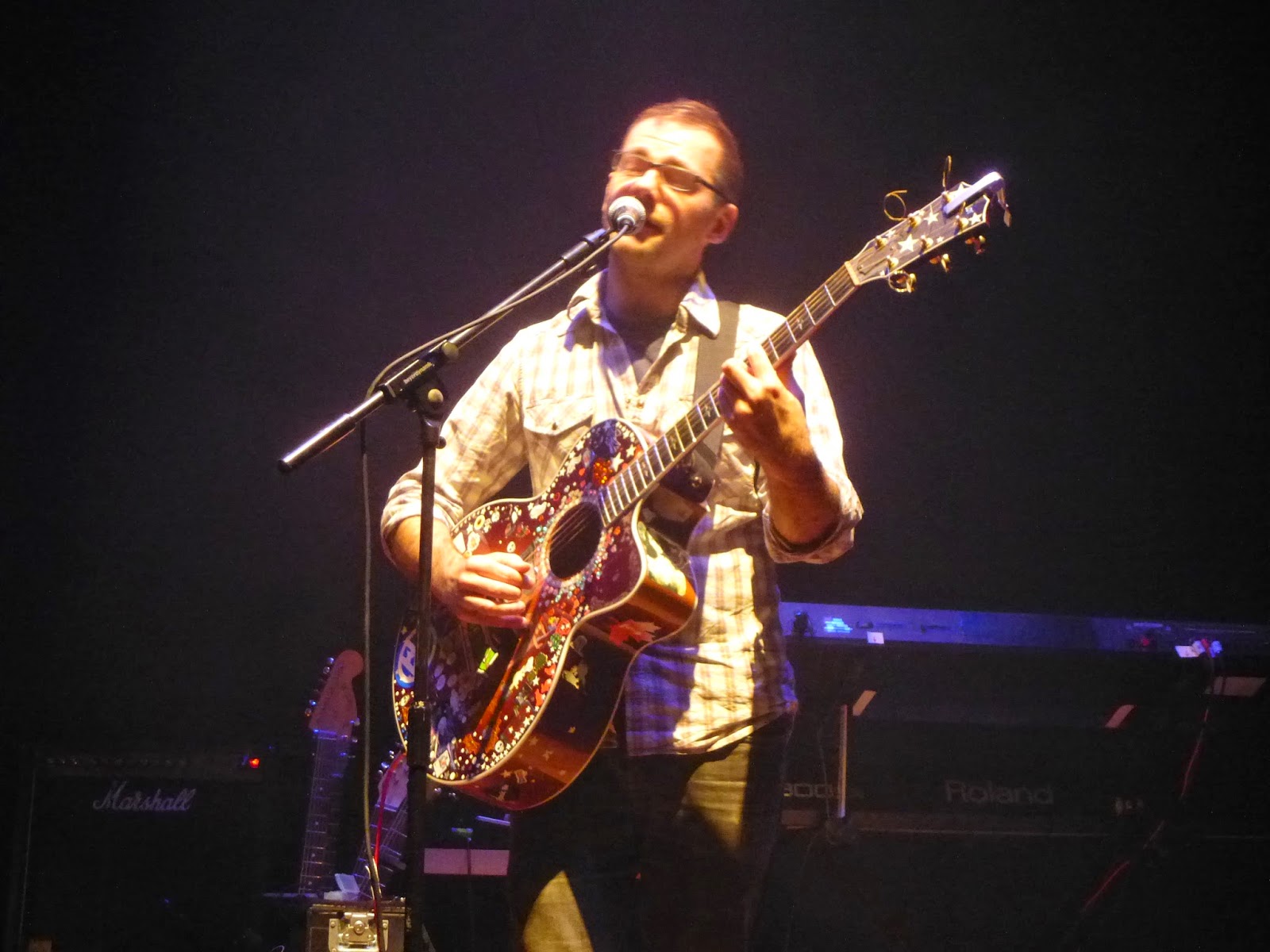 Taking a break from recording sessions, a stripped-down five-piece James played an intimate one-hour show to 150 lucky people at the Tolbooth in Stirling.  We were there to catch them mix songs from their current album La Petite Mort with some less familiar tracks from their back catalogue.

Opening the set tonight for James is Ainslie Henderson.  Those with a memory for such things will remember him as a fresh-faced contestant on the first series of BBC's Fame Academy in 2002, where he worked with Mark and Saul from James.  Since then, he released an album, but has become better known as a BAFTA award winning animator, and, most recently, produced the video for James' Moving On single that has won several award nominations already.

Tonight is the first time he's been on stage for four years, a fact he wanted to hide to avoid showing nerves, but Saul tells us this in his introduction.  He plays six songs including an acoustic cover of James' 1997 Whiplash album track Play Dead.  His own songs show as a musician he stands far above the usual talent show crowd with their songwriting teams.  He speaks in reverential terms of his love for James and it seems a pity that he's still not producing new music on the basis of tonight's set. 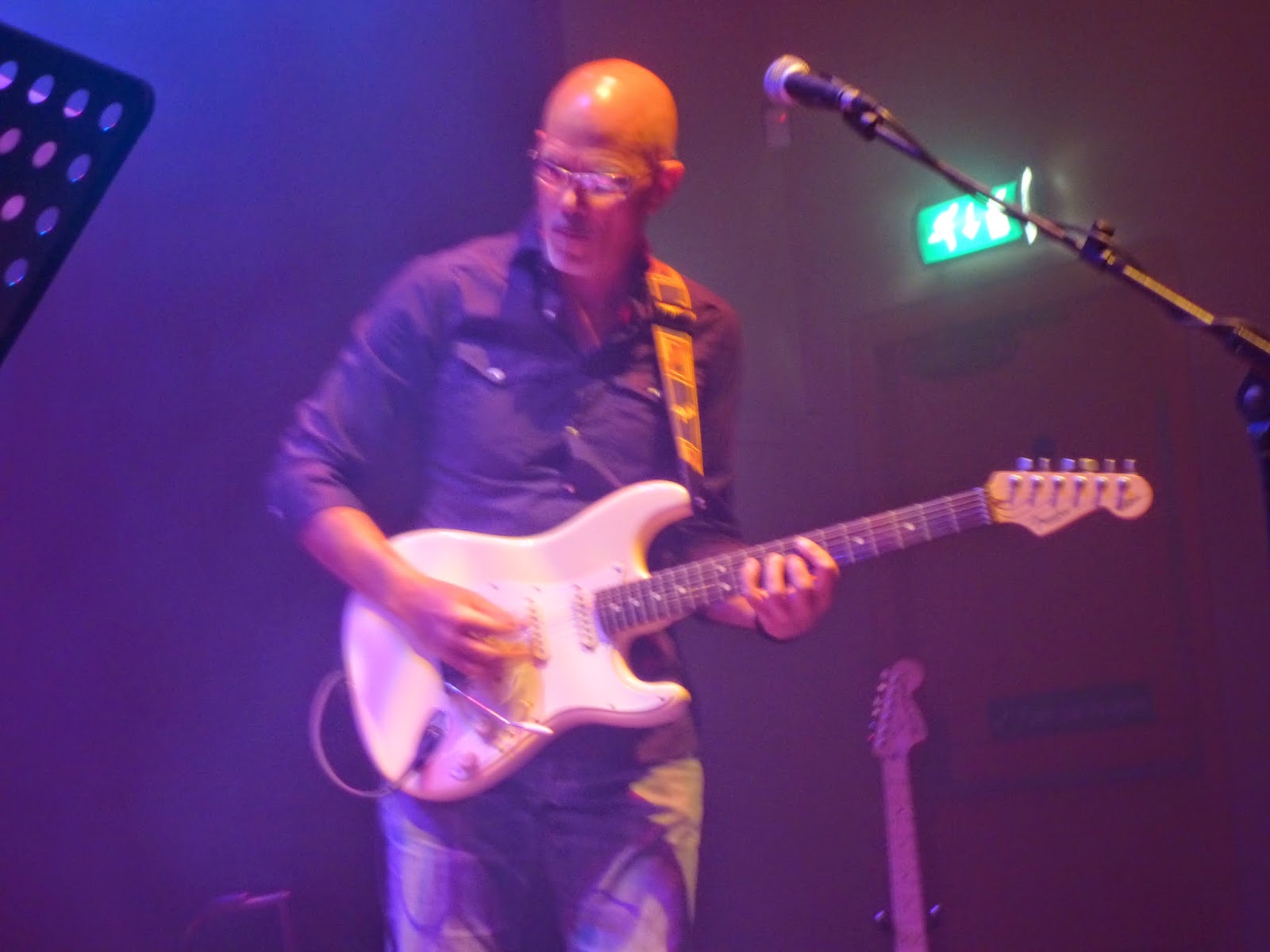 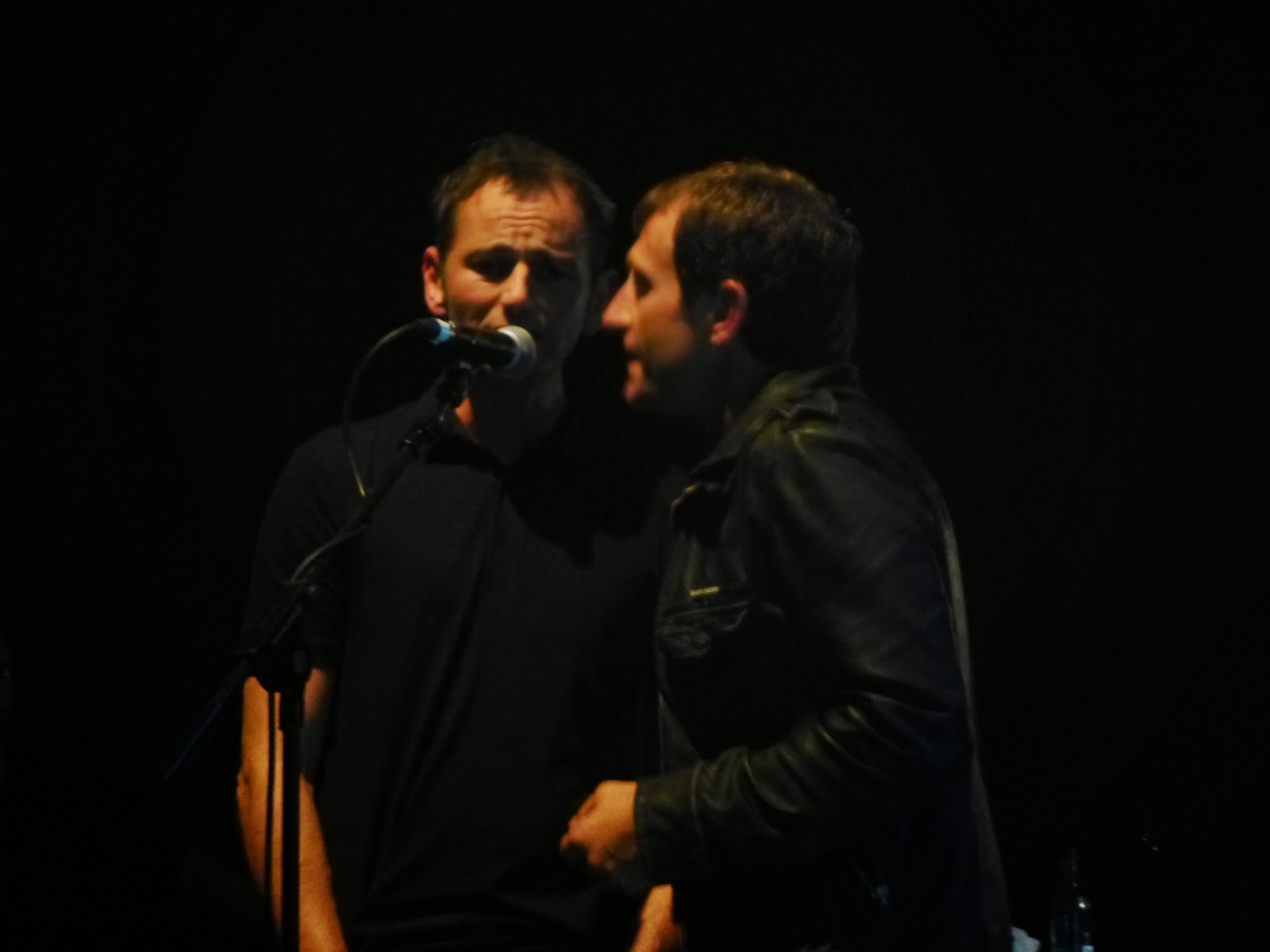 The gig had been advertised as acoustic, but there was nothing acoustic about this in reality.  Without trumpet player Andy and drummer Dave, the other five members of James have been holed away at the Tolbooth writing songs for their next album and decided to put this show on as thanks to the venue for accommodating them.  Tickets sold out in thirty seconds as you'd expect for a band of James' stature playing a room this size.

Dream Thrum off the Laid album open proceedings and sets the standard for the evening.  The sound is beautifully crisp all night and the lighting is vivid but simple enough to not distract from the music.  This helps bring the song to life with Saul Davies' violin in particular piercing the warm expectant atmosphere.  The crowd are almost unsure how to react, there's a bit of ill-advised clapping which threatens to spoil the song, but it quickly subsides and is generally reserved for appropriate moments in the set. 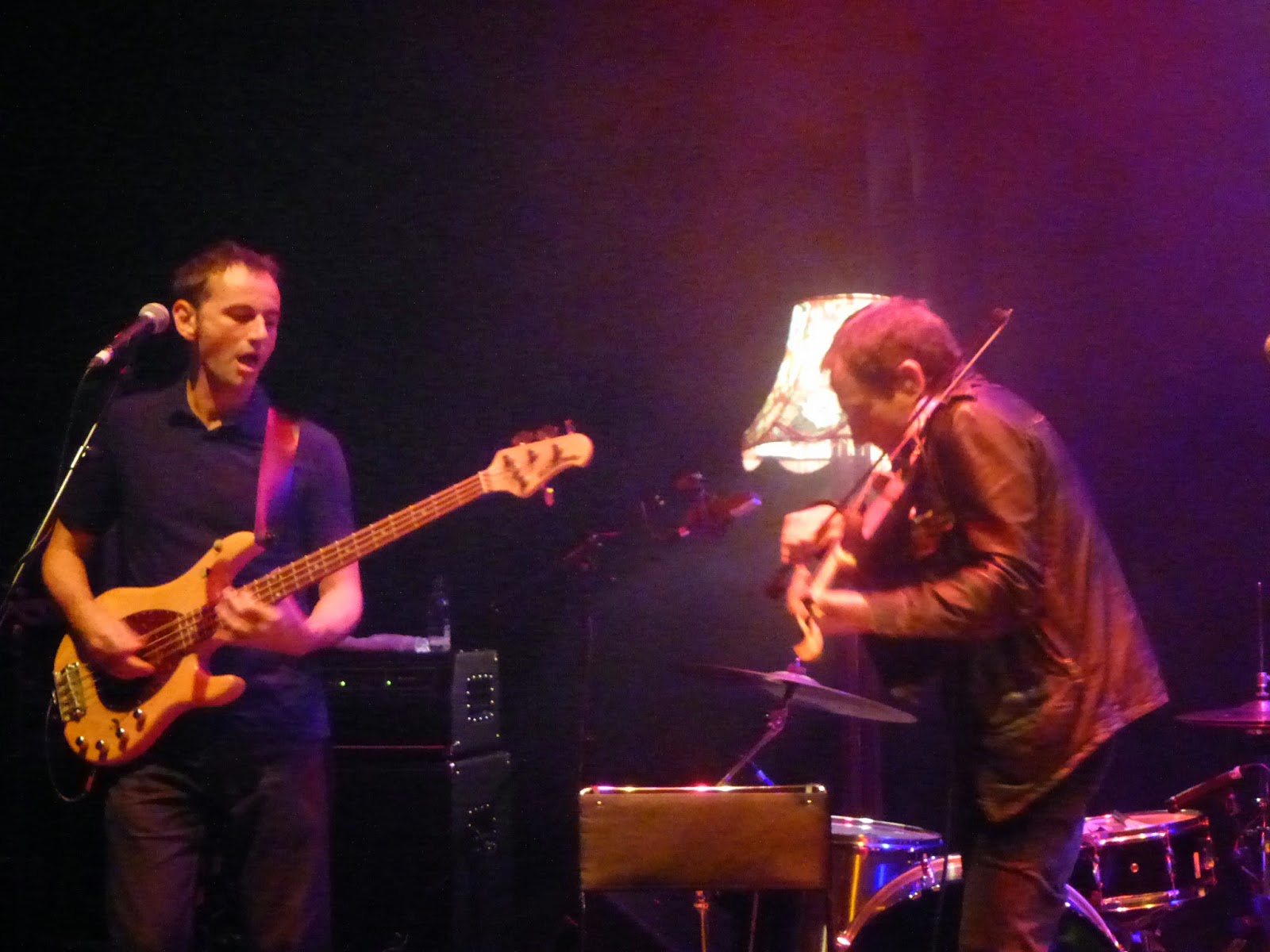 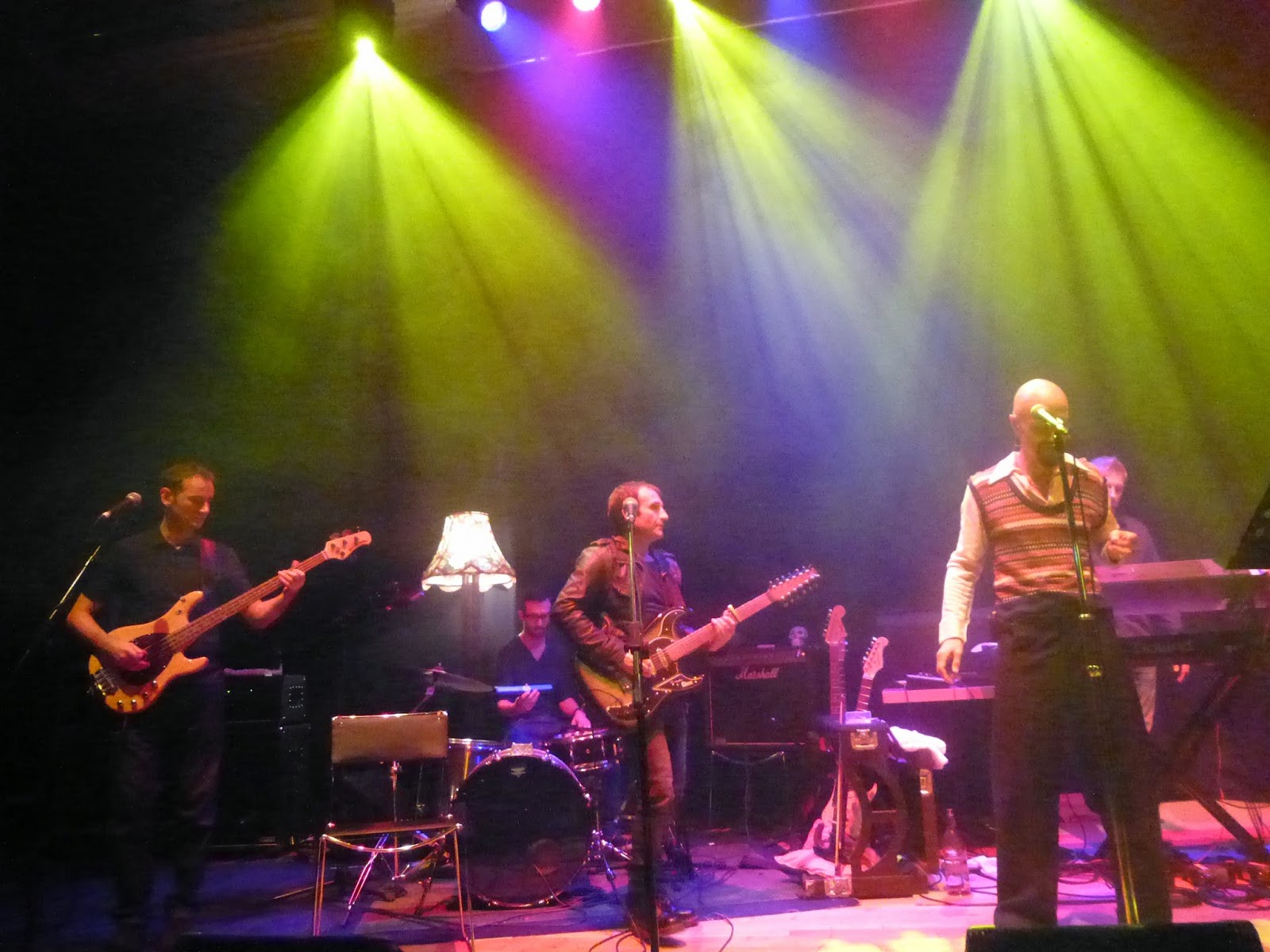 Walk Like You, the opening track off La Petite Mort, is a story of children not following in their parents' footsteps.  It weighs in at over seven minutes on the album and tonight it's stretched yet further.  Davies again demonstrates his flexibility as a musician by playing bass drum with his feet whilst playing guitar before switching to violin as the song approaches ten minutes.  It's rapidly reaching the point where it could replace the likes of Sound or Johnny Yen as the high watermark of James' improvisation in their live shows.

She's A Star is played relatively straight compared to the rest of the set but it actually benefits from that approach to it.  It's a great three and a bit minute pop song and one of their four top ten singles and tonight it sounds fresh and revitalised.  The crowd want to get up and dance as you sense the celebratory nature of having even got tickets to be here but respect the environment the band has chosen to perform this set in.

The first song revealed off La Petite Mort was Frozen Britain and it's definitely been a grower.  Live, it's stretched so that the outro has Tim singing the "la petite mort pour toujours" refrain repeatedly and the keyboard / guitar motif that runs through it feels like it's about to career off the rails, but, like the best James songs, walks that tightrope between brilliance and chaos and makes it through to the other side. 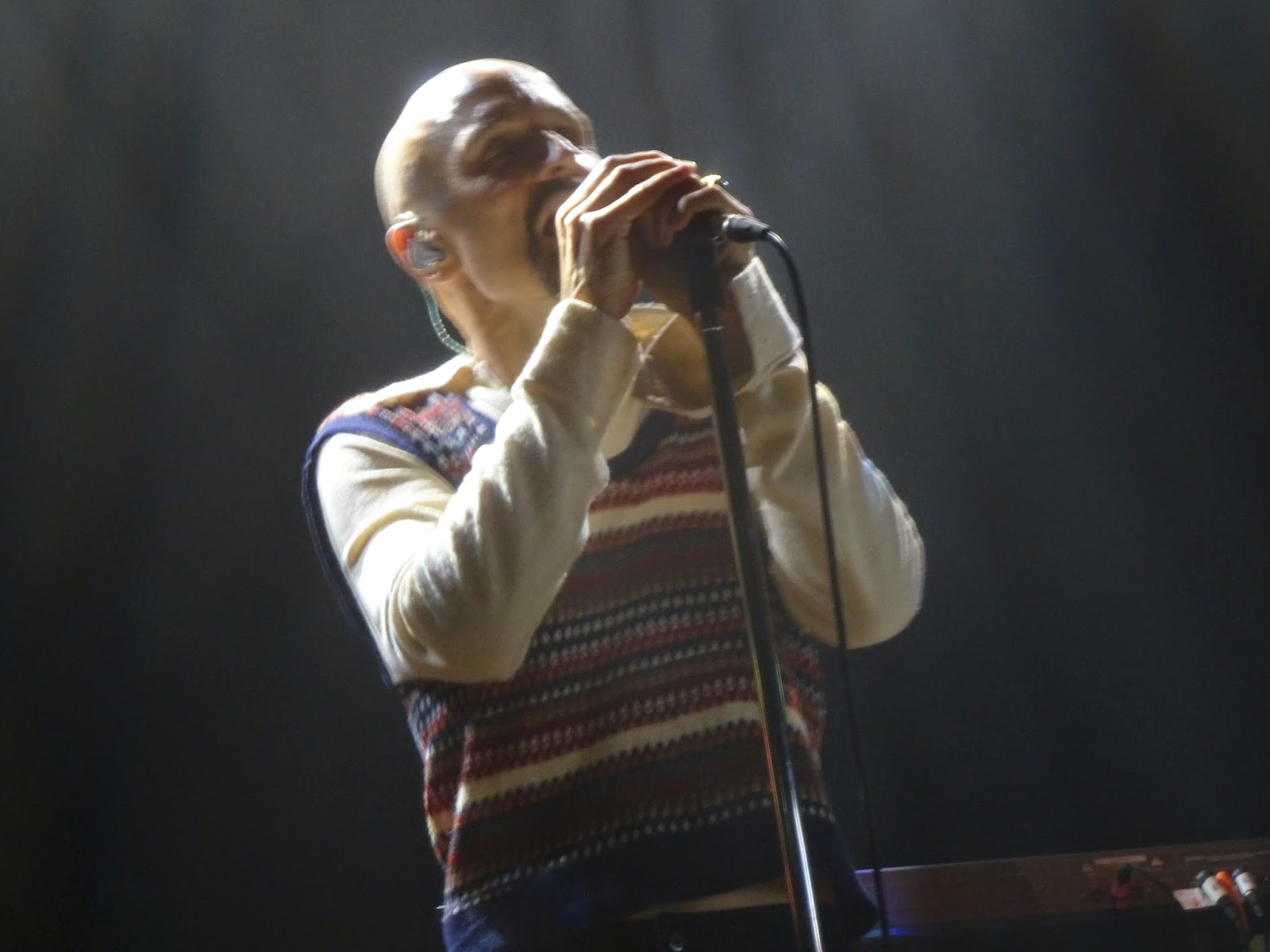 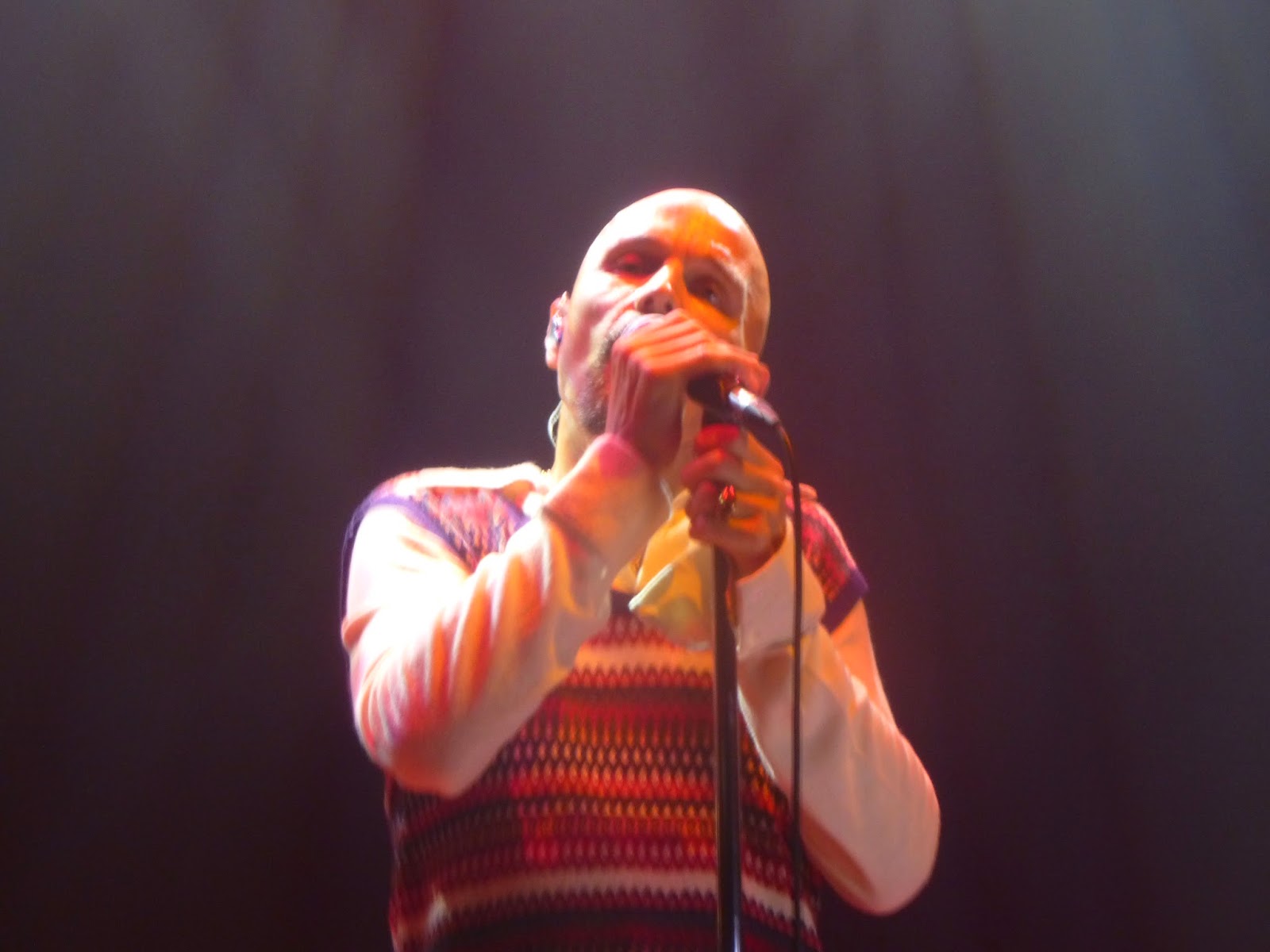 Things then take a turn for the obscure.  Undertaker was, by memory, last played in 1991 after featuring heavily in 1989 sets and then becoming one of the b-sides to the How Was It For You single.  Tim explains to us that the background of the song is the American evangelist Jimmy Swaggart who was caught with his trousers down after preaching adherence to religious codes. It's one of a number of songs from that era that didn't make the Gold Mother album, but which show the band in transition from their four-piece roots to the seven-piece hit machine they became.  It feels more grown up tonight and some of the rougher edges have been knocked off it with age, but it's a more than welcome surprise to people who've travelled from all over for this show.

Next up is the final track off Whiplash, the gorgeous ballad about a suicide in the snow, Blue Pastures.  Tim explains the lyrics had come to him in two jam sessions and shortly after its completion and prior to the release, a mentor of a friend walked out into the snow and committed suicide, as if the song was a premonition.  Whilst it brings the pace of the set down a notch, it demonstrates that James are masters of all volumes and not just the big arena hits they're best known for.

The Shining comes from 2001's Pleased To Meet You album and has made appearances in the sets since the band's reunion and appears to be a favourite.  On this evidence quite rightly so as it's a beautiful declaration of love - "I've journeyed round the outer worlds to return home to you" and "I found a lover, knows me better than myself." 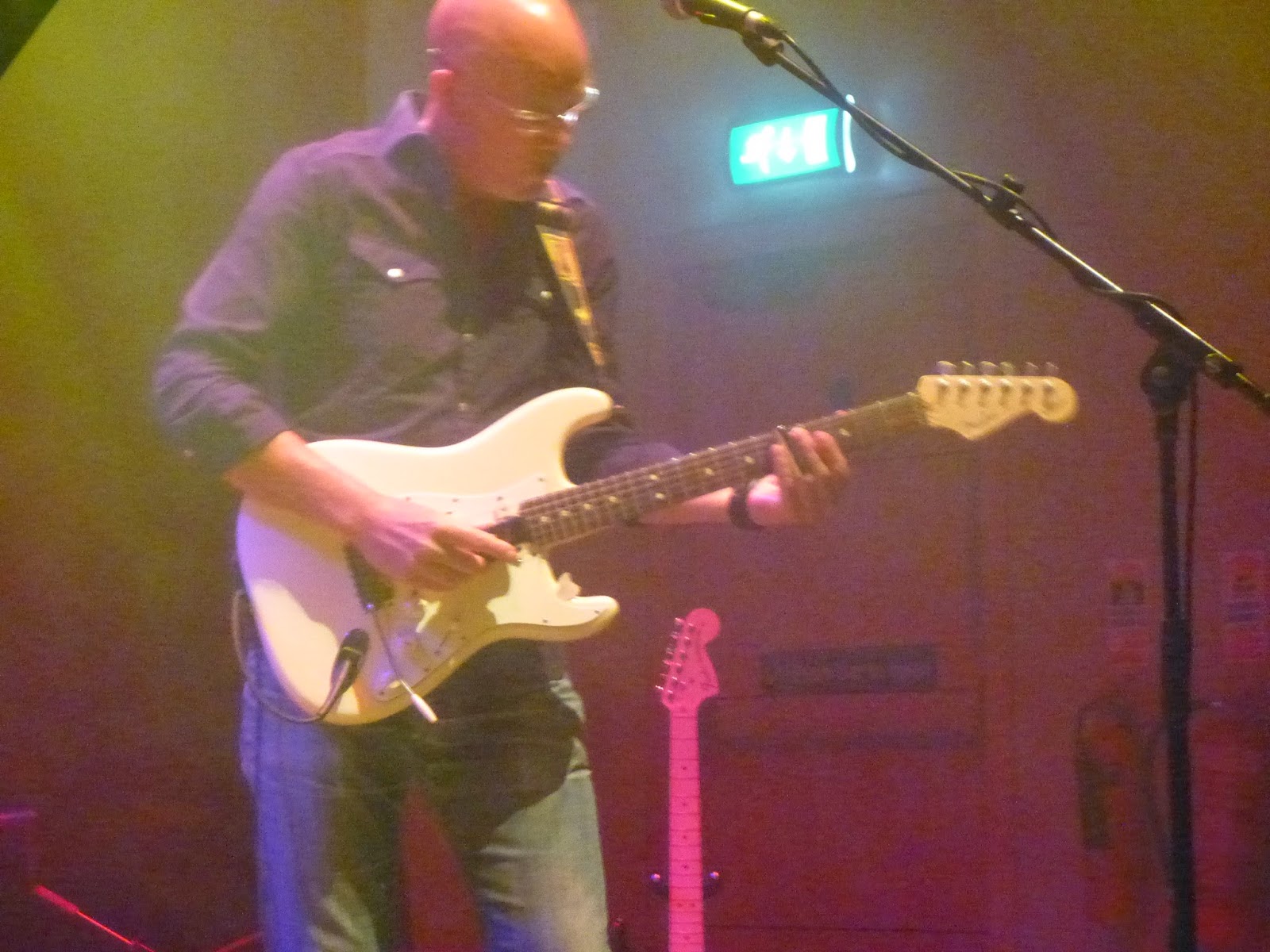 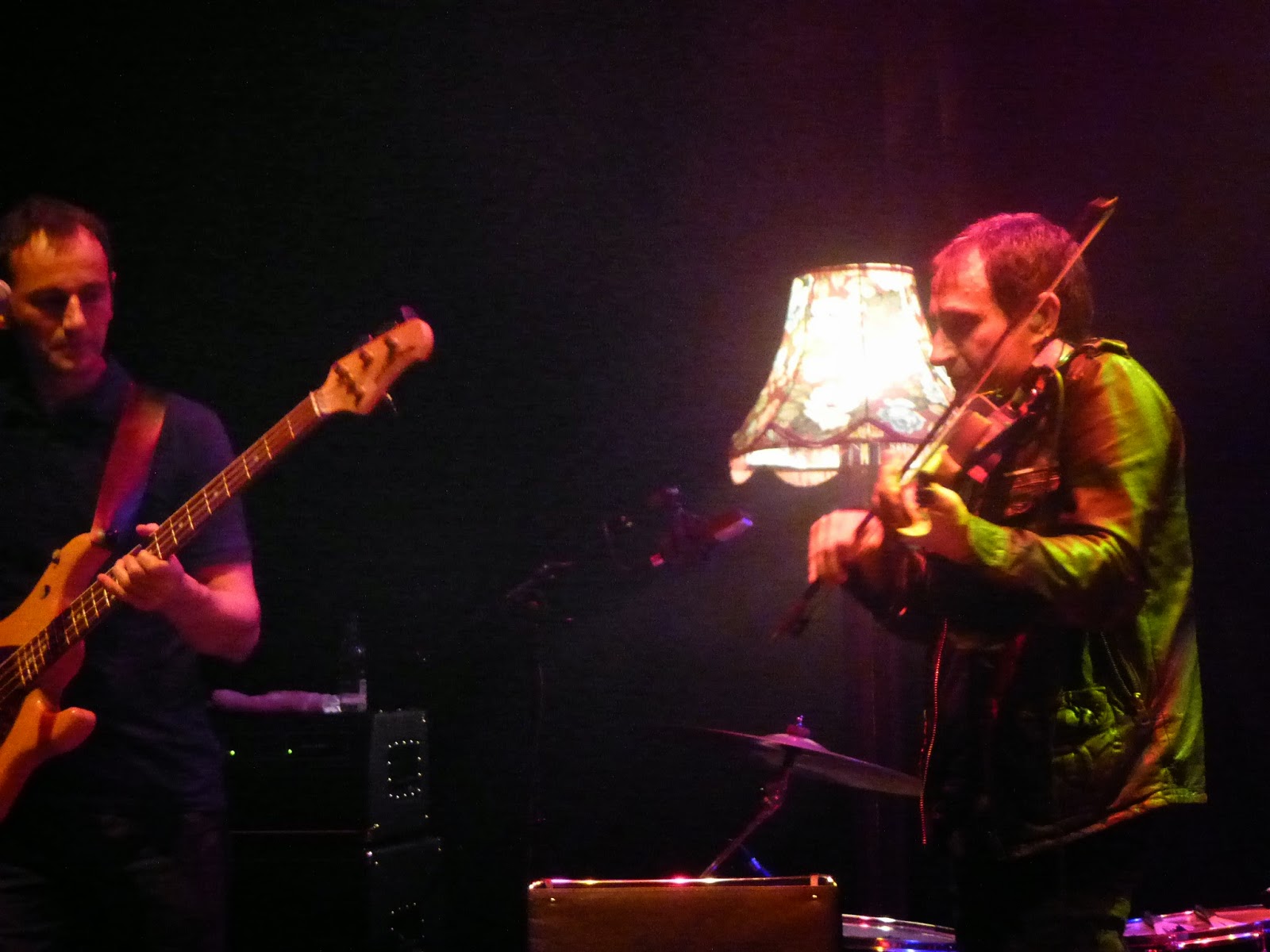 We then get three songs together from La Petite Mort that seal its spot as a career highpoint. Interrogation is a exercise in self-assessment and self-criticism, building from a quiet start into something quite sonically ferocious that goes beyond the album version, a common trait in the James' live set-up.

Bitter Virtue seems Tim have some issues with the lyrics, but whilst it would throw many bands, they go back round and repeat the verse and it demonstrates the human side to James, the playing and living on the edge.  Prior to it, Tim explains it's a song about how women are viewed differently from their male counterparts - how the likes of Lady Gaga and Miley Cyrus are judged adversely on their appearance and their videos.

All I'm Saying is about the death of Tim's close friend Gabrielle Roth and he says at the start that it's a difficult song for him to get through.  He manages it and it's a complete success, building slowly into a chorus that feels more like a celebration of life past rather than mourning a death, a uniquely perverse way James have of turning dark lyrics into something more akin to celebration or, at least, an exorcism of demons.

Getting Away With It really tests the audience's composure as it's effectively an invitation to get up and dance, although the two gentlemen that do are ushered to the side in order to do so. It's a fairly permanent feature in the setlist now and has become a huge crowd favourite despite its disappointing chart position through lack of label support on its release.  Tim loses himself in dance as the song builds to its climax, the crowd singing and clapping along.

The false encore and final song of the set is the eerie, haunting Top Of The World, another James masterclass in capturing the slower more atmospheric track.  Yet again, Davies' under-rated and under-utilised violin playing comes to the fore as the song moves to its climax. 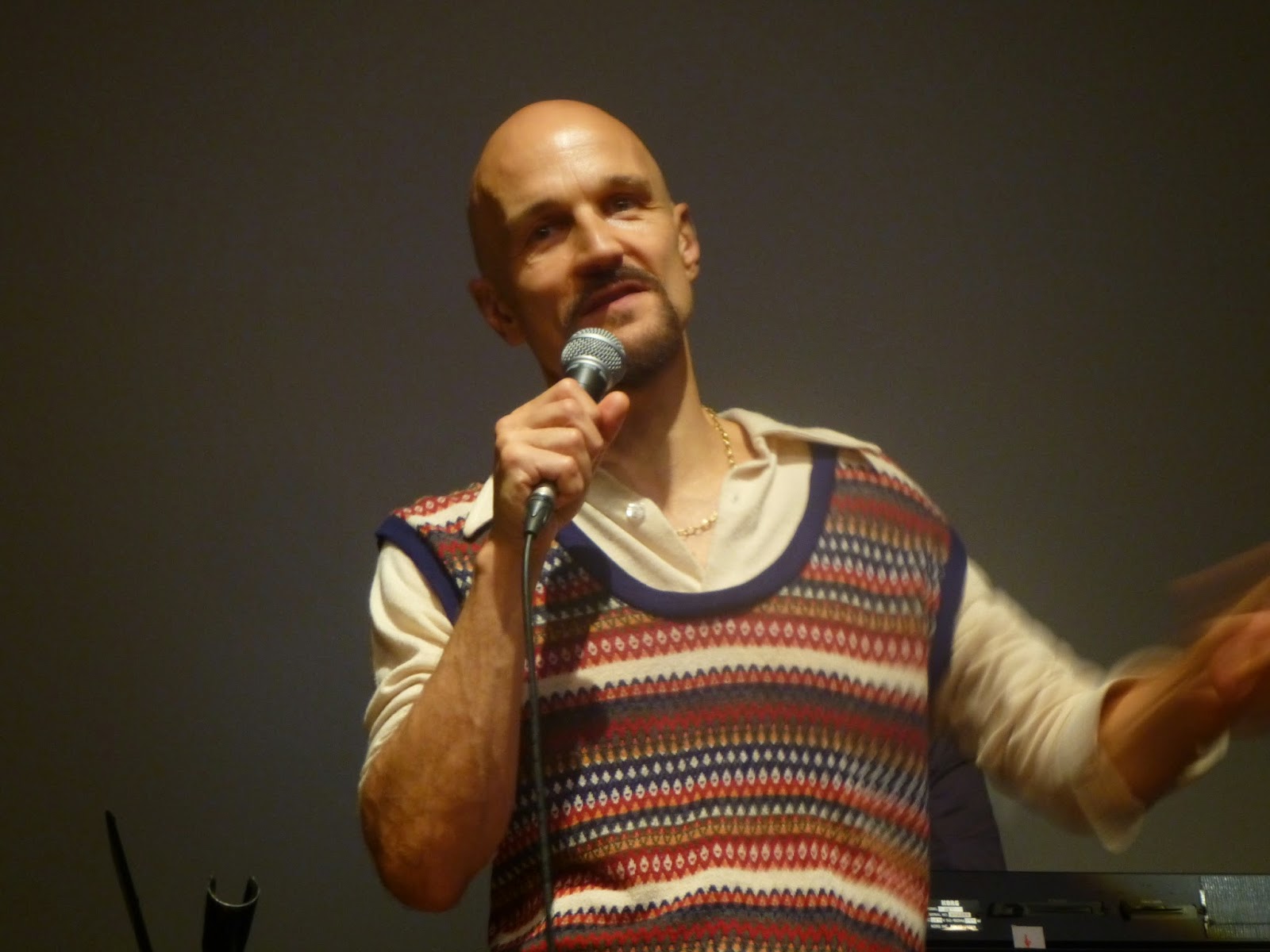 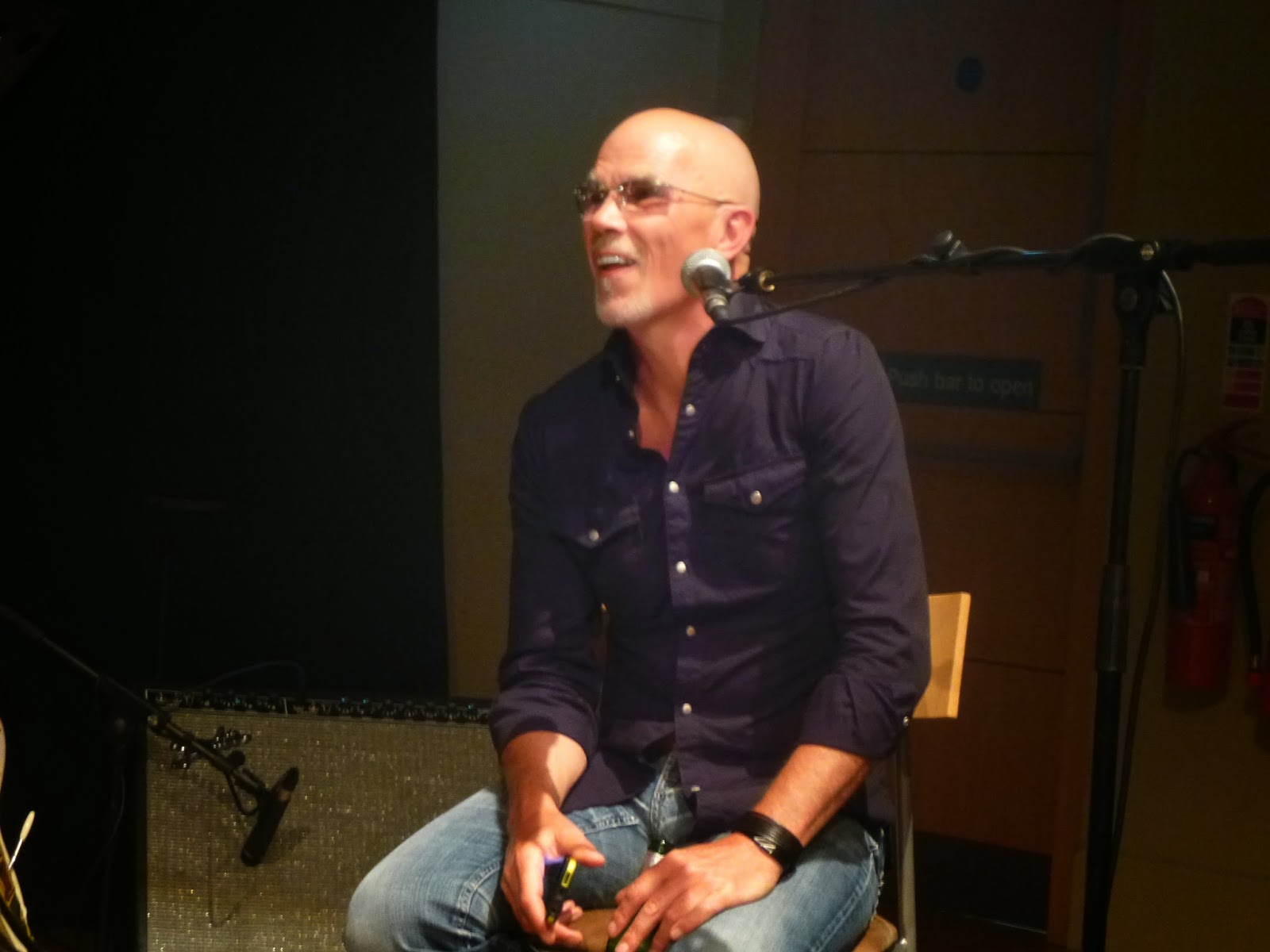 They then finish the evening with a question and answer session with the audience that delves into the stories behind some of the stories on the new album, Tim and Larry telling us personal stories about how death and illness has impacted them in the past two years, their roughest gig ever (Leeds Astoria 1985), the recording of a new album and whether they will return to the Barrowlands in Glasgow rather than the arenas they've played recently.

The whole evening confirms that James are still ploughing a different furrow to their contemporaries. Logically, there's no rhyme or reason to this gig, but it's a means of them challenging themselves, revisiting their extensive back catalogue and treating their loyal fans to a special evening.  It also highlights that in La Petite Mort, they've produced one of, if not their most thematically consistent yet still musically thrilling albums of their thirty years as a band.

James played Dream Thrum, Walk Like You, She's A Star, Frozen Britain, Undertaker, Blue Pastures, The Shining, Interrogation, Bitter Virtue, All I'm Saying, Getting Away With It (All Messed Up) and Top Of The World.


James' official website can be found here, where you can find details of their November arena tour.   They are on Facebook and Twitter.   Some of the band - Tim, Larry and Dave - are also on Twitter.