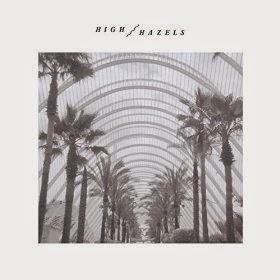 High Hazels released their debut self-titled album yesterday, one of our favourites of the year so far.  We had the opportunity of a brief chat with them to find out a little more about them.


Where does the name High Hazels come from?

High Hazels is a park down the road from where we all live and have grown up. It’s a subtle reference to where we are from; also the words seemed to fit with the feel of our music.

You’ve known each other for a long time back to schooldays.  Has that helped you gel as a band and has it created any problems?

It’s been a natural process, we are a close group of friends and the band is as much of a social event as it is a creative event. Paul and Ants can have the odd brotherly tiff!

Do you write songs together as a band or do you have songwriters who bring them to the band?

As a band, everyone has various inputs into the songs; it is very much a band effort.

There’s a very hazy romantic feel to your lyrics.  Do you write about real life events you’ve observed or experienced?

You’ve only really been in the public eye for just over a year.  What have been the highlights of that time?

The chance to record an album was a definite highlight. Doing a live session with Dermot O’Leary on Radio 2 was also an amazing experience.

Which tracks on the album are you most proud of?

We are proud of every song on the album.

The album is out now.  What are your plans for the next six months?

To get out on tour as much as possible, whilst at the same time writing a second album, which we have already started and are very excited about.