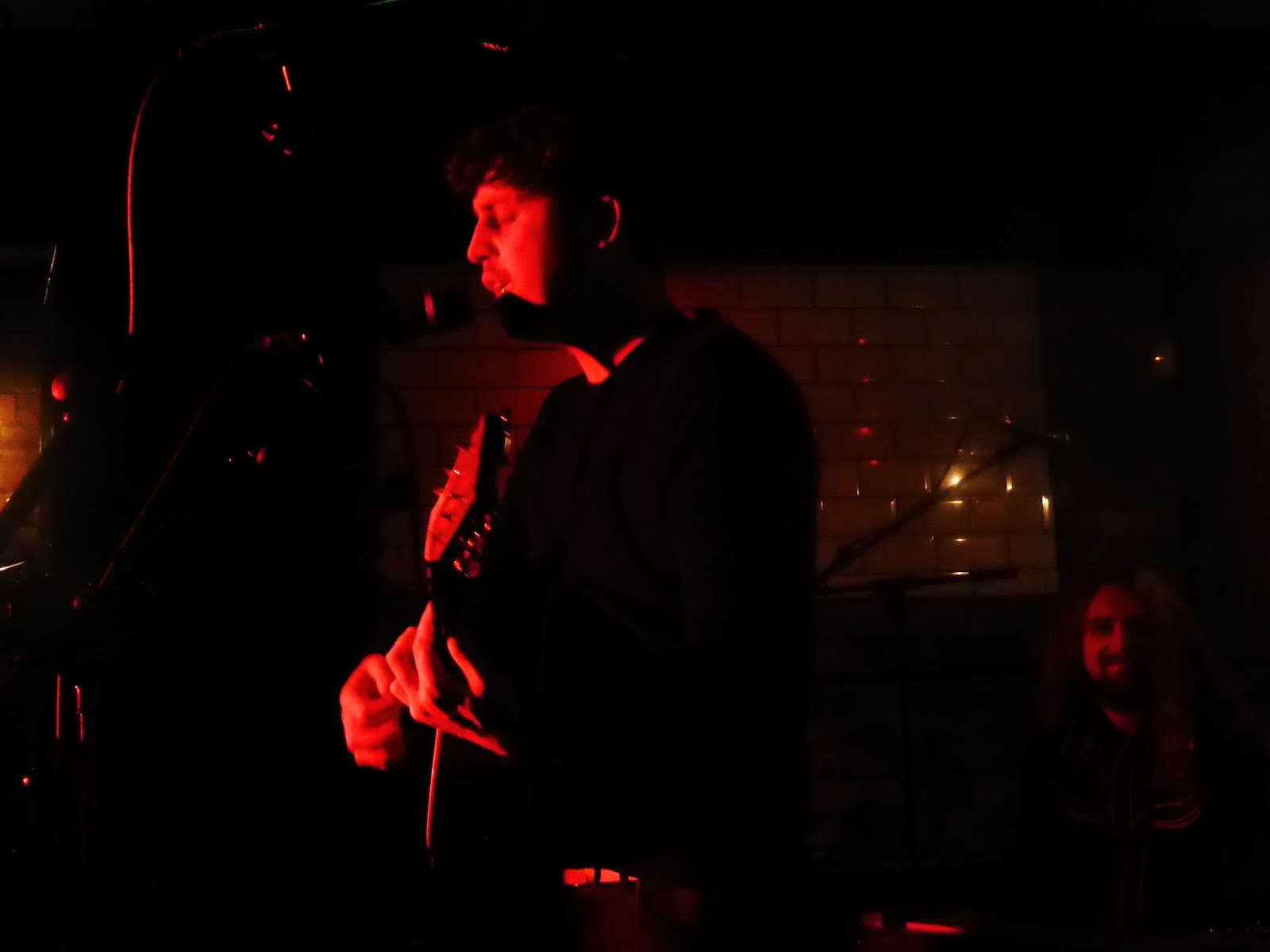 We've raved about Dave Fidler's brilliant solo debut I'm Not Here for quite some time tonight and last night saw the launch gig for it at Manchester's Whiskey Jar.  As people were being turned away at the door, Dave put on a show that added new textures to the album as well as a few covers and some as gems from his days in Bluebird Kid Clark. 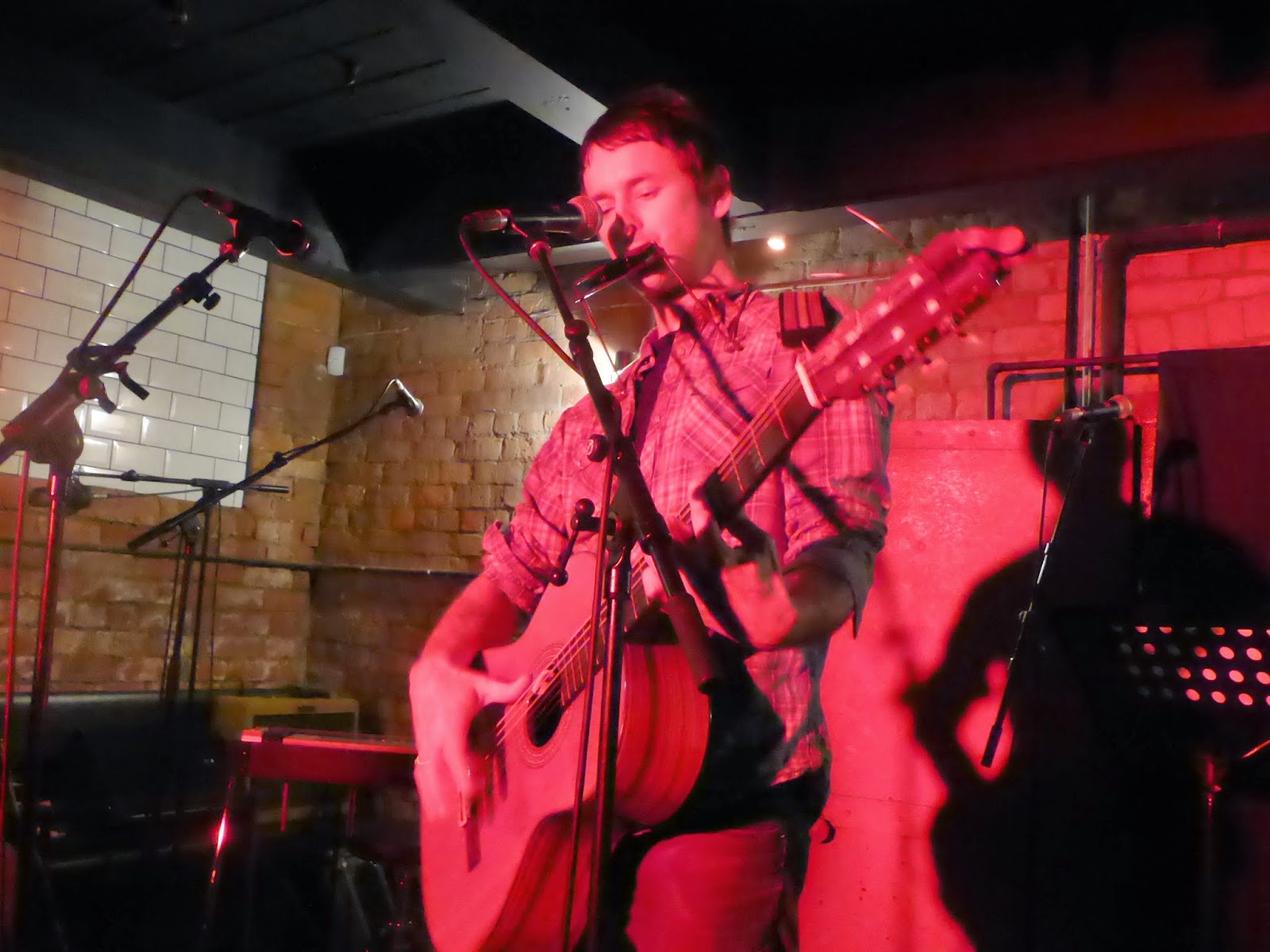 Opening the evening is Mano McLaughlin, an old pal and songwriting companion of Dave's (the title track I'm Not Here is a co-write) and one of the most under-rated guitarists in the city.  He plays tracks from his criminally ignored excellent Peach Got Bones album from 2013 as well as new as from his previous band Meadow including Chicken Feet and Bus Stop Strangers, simple yet exquisitely structured songs delivered in a half-spoken half-sung voice.  Like all great songwriters, he takes time out to explain his songs as well and engage with his crowd, joking that everyone is too happy at point so plays a song entitled The Morning After The Longest Day about an old friend's funeral. Whilst songwriters with only a fraction of his talent get praised to the rafters, Mano keeps ploughing his own furrow regardless.  Check him out.

Dave's introduced by John Bramwell from I Am Kloot who he has been touring with who describes him as a "beautiful superhuman" which might be stretching a point a bit although his later assertion that Dave is "the best songwriter and performer I've come across in the last twenty years" is heartfelt and sincere, but what tonight demonstrates is the versatility of the songs that were recorded reel-to-reel on I'm Not Here. He's accompanied by Adrian Gautrey on pedal steel and guitar and two backing vocalists Amy Williams and Lisa Burrell on some of the songs as well as inviting Mano on stage for a couple of songs. 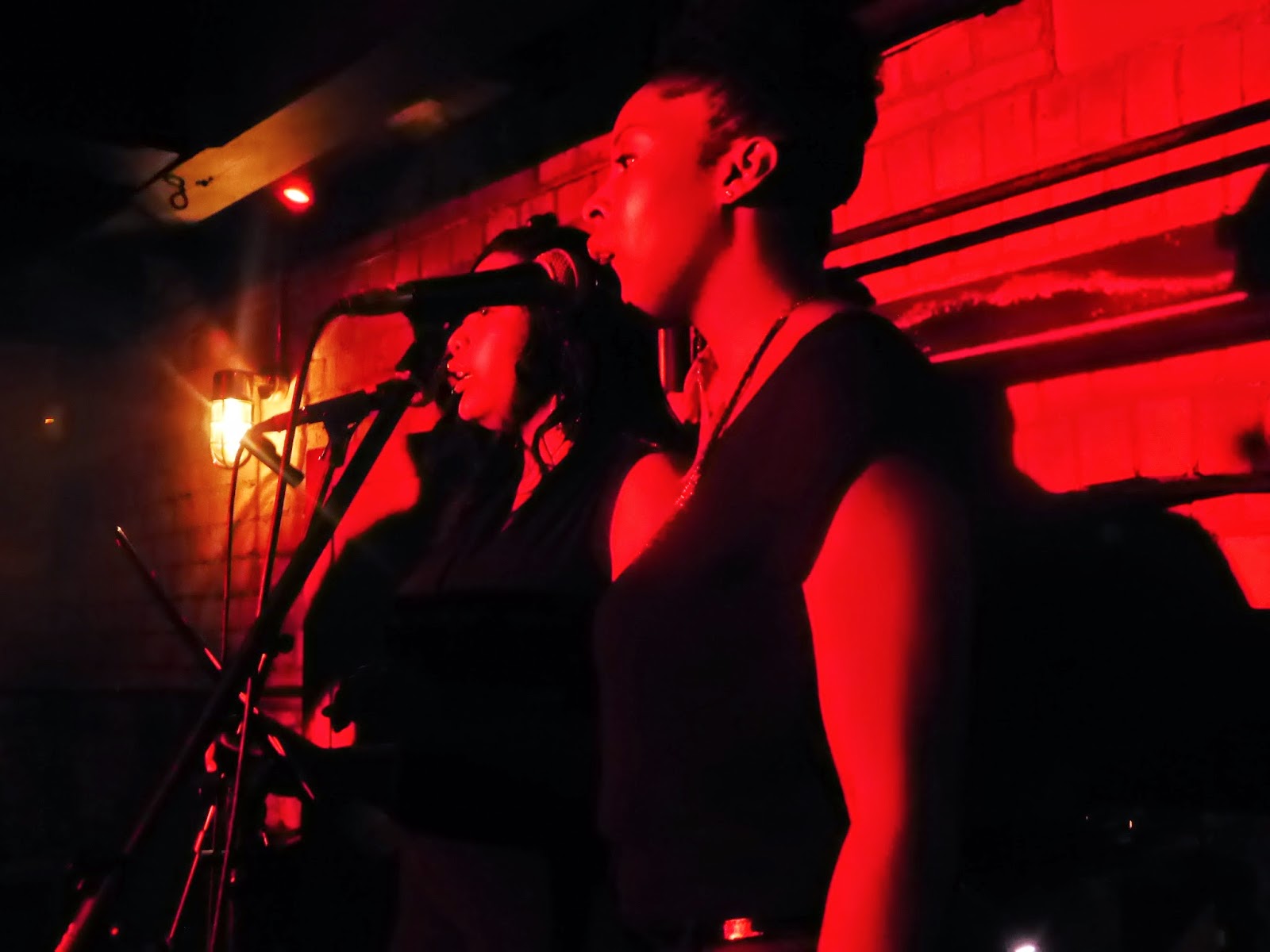 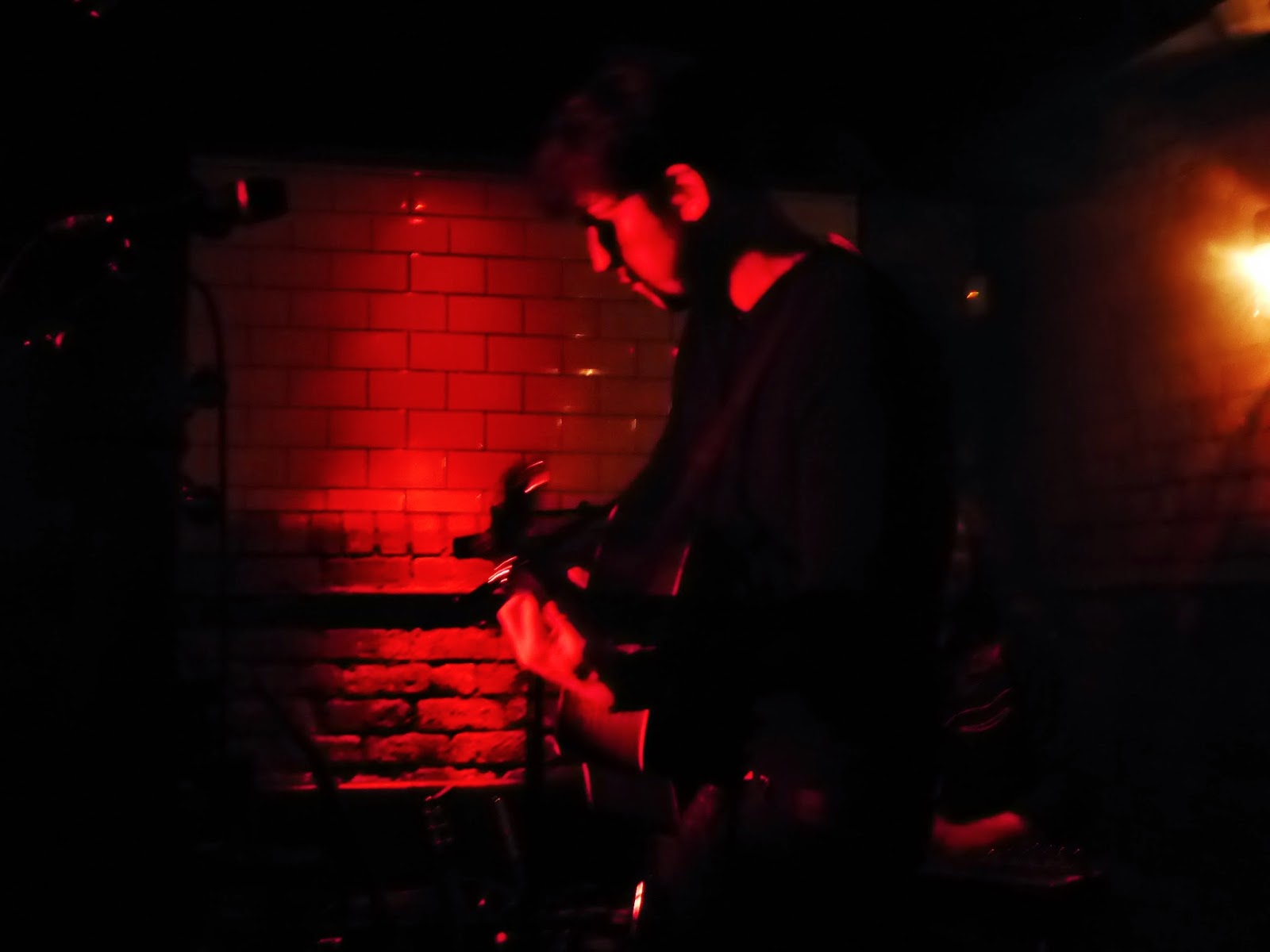 This allows him to play with them a little more, incorporating a section of Crosby Stills And Nash's Judy Blue Eyes into Taking Over and the backing vocals work beautifully in the emotional Song For Nico.  Ailsa is transformed by the subtlety that the pedal steel brings to the piece and the lift the girls give to the chorus and the breakdown, the intrinsic beauty of the original is left intact, but these versions feel incredibly special.

We get the full album tonight as well so there's welcome rare outings for tracks like The Raise,  Reassured and Where Does All My Time Go?.  Easy Gone Easy Come is another song to benefit from the pedal steel and it also encourages Dave to sing differently as well which gives another interesting view of the songs.  Even Dave is transfixed by the pedal steel and stops the song and ask Adrian to play it again.

We're also treated to a couple of covers and it's interesting to remember here that Dave's relationship with John Bramwell dates back to him seeing him playing a covers set at last year's Manchester Food and Drink Festival.  What the cover of Dylan's Lay Lady Lay demonstrates is his ability to master classics and put his own spin on them without betraying the original.

We get a few tracks that aren't on the album as well.  Get Up is a track from his Bluebird Kid Clark days that he plays with Mano and has a slightly more country feel to it.  He drags up fellow Bluebird Sion Fitton up for a cover of The Faces' Glad And Sorry.  But he saves the best for last.  Go To Sleep appeared on a Bluebird mini-album and is an absolutely beautiful evocative song about love and has a stunning vocal section by Lisa as well. 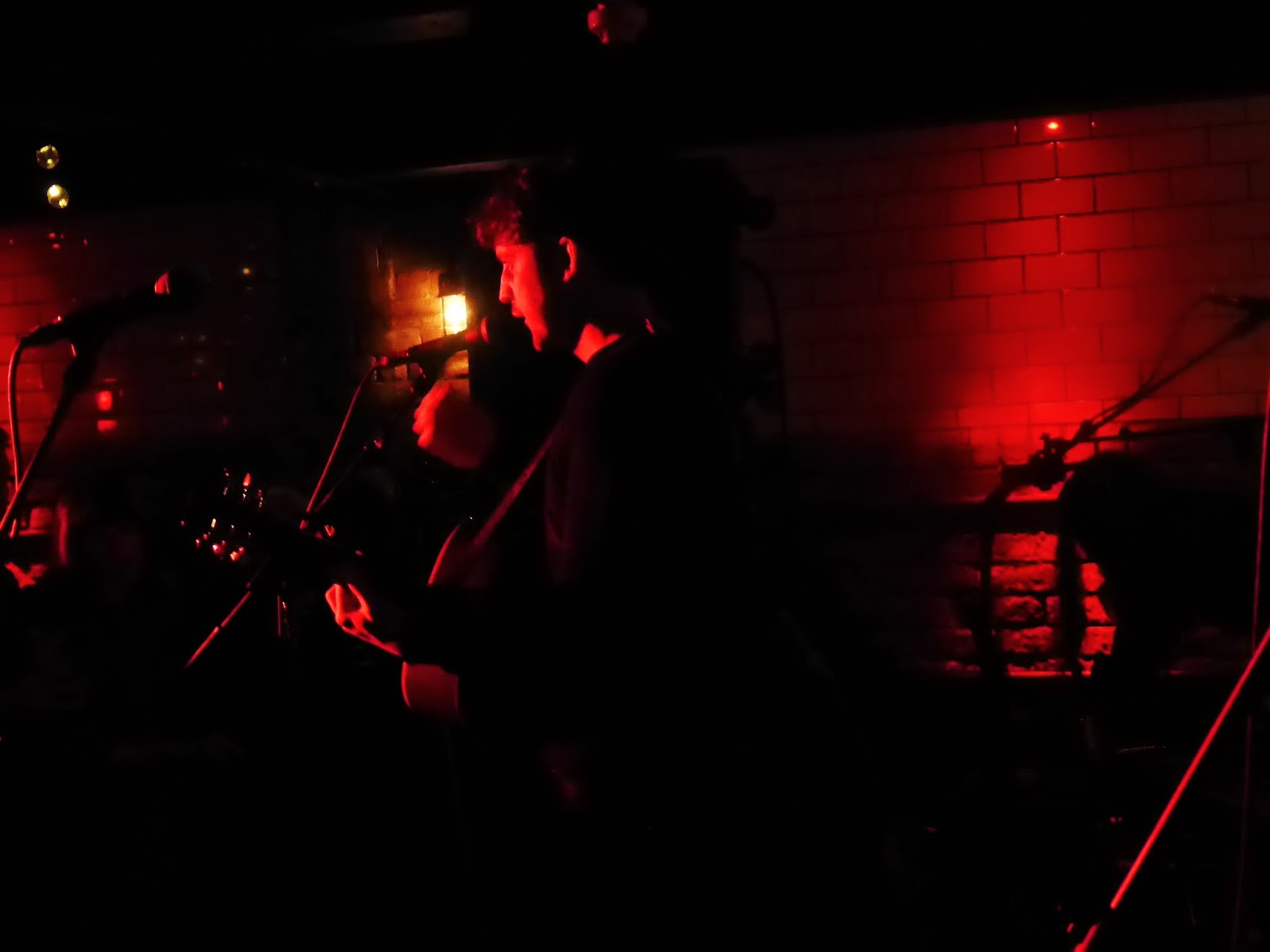 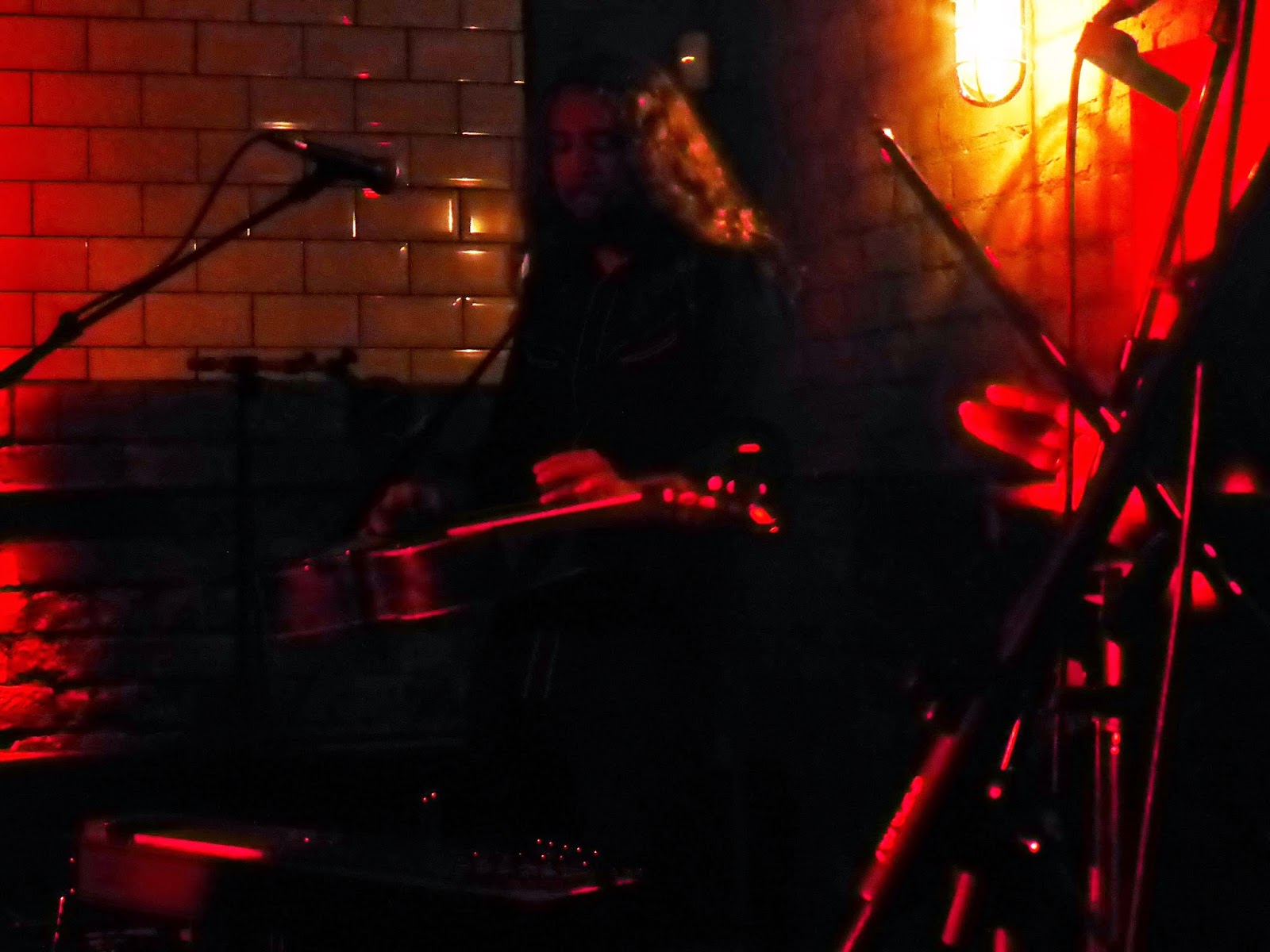 A perfect evening to launch the album was then complete.  The Whiskey Jar was rammed out and the crowd incredibly attentive and captivated by what they witnessed up on the stage, a perfect re-interpretation of parts of the album, some well-chosen covers, additional musicians who added so much at just the right points as well as the traditional solo stuff we've come to love.  And it felt like a joining of strands of Dave's past and present and future in one room, a communal love-in celebration rather than a record launch. The album's superb, just go and buy it.

Dave played I'm Not Here, Taking Over / Judy Blue Eyes, Song For Nico, Ailsa, The Raise, Easy Gone Easy Come, Reassured, Lay Lady Lay, Silver Spoon, Tommy, Where Does All My Time Go?, Get Up, Glad And Sorry and Go To Sleep.


Our review of the album can be found here and a full in-depth interview with Dave here and a track-by-track walk through of I'm Not Here is also on the blog.

Dave Fidler's website can be found here and the album can be purchased on CD and vinyl from there.  He is also on Twitter and Facebook.