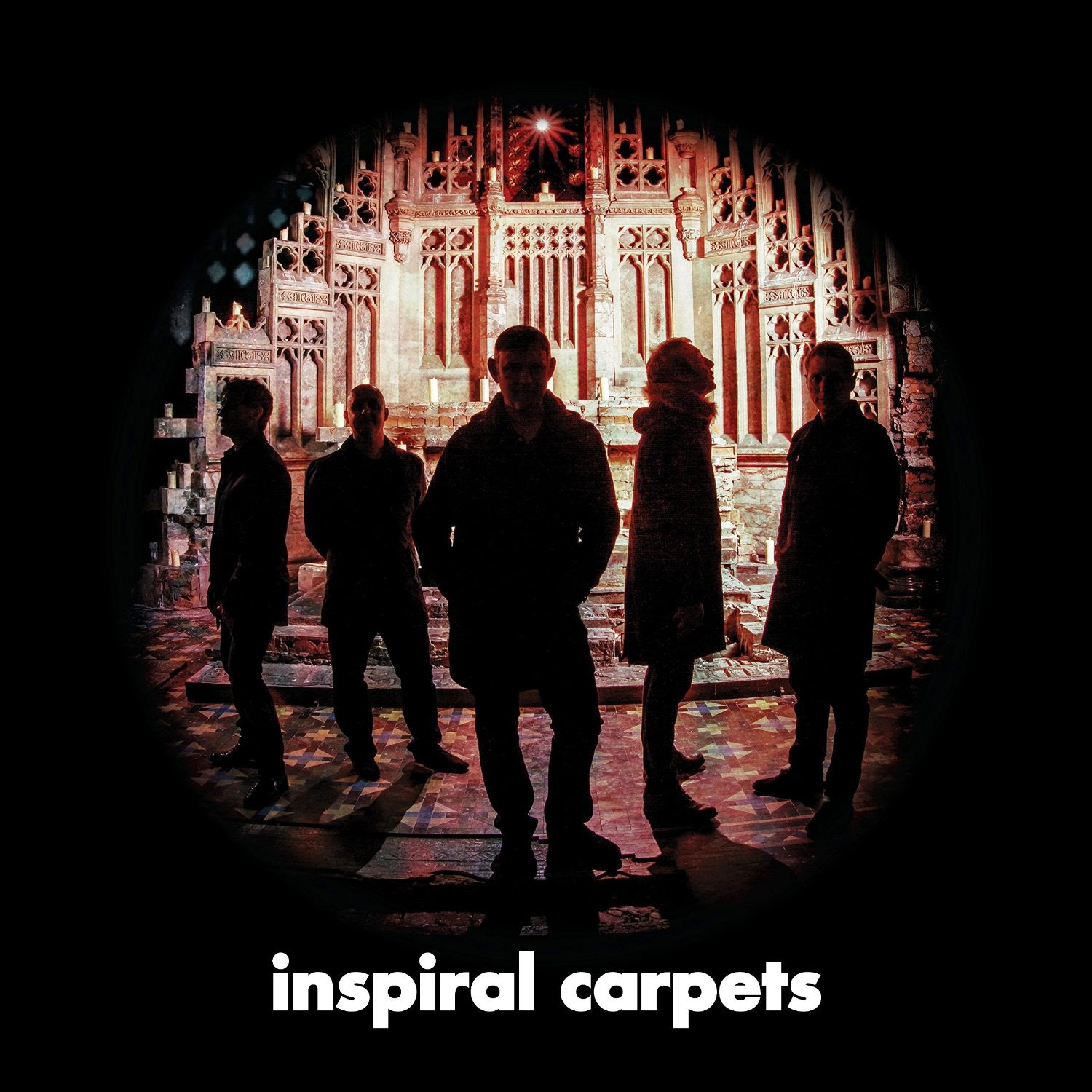 It's two and a half years since Inspiral Carpets announced the return of original singer Stephen Holt, who left prior to what's been termed the "Glory Years" of the band between 1989 and 1994 where they were chart regulars and released four albums with former vocalist Tom Hingley.  Since that changeover they've released a couple of limited edition singles, but they're back with a self-titled album that surpasses anything they've released in their career so far.

It's immediately obvious from opener Monochrome that this is a band returning to their garage roots.  There was always a feeling that the Inspirals, once Life had made them household names, tried to be a little too ambitious and clever in their recorded output, particularly away from the singles that kept them on the radio and in the charts.  There's no such fuss here - it's true to the band's earliest days of trudging round toilet venues, capturing their songs in snatched moments between their day jobs and, now, their family lives.  There's an uplifting, almost evangelical, positivity to the music.

It's impossible to avoid the question about Holt vs Hingley as vocalists.  What's clear though is that this record has been written and recorded to make full use of Holt's strengths and you could only imagine him singing these songs.  Their live shows might make the listener draw comparisons - they're unnecessary on this album.  Lyrically there's a few references to that fall-out - the most obvious being Monochrome which feels like a retort to Hingley's Carpet Burns book - "one day the truth will out, no question or no doubt, read what it's all about at home." But as the Inspirals here have produced the best album released under their name, Hingley is coincidentally recording and touring some of the best music that's gone out under his name too.


Recent single Spitfire and 2012 Record Store Day single You're So Good For Me follow and would both sit comfortably along any of the Inspirals greatest hits in any sets.  Spitfire is a declaration of love - "you and I are fighting for a different cause, you and I want to be free, let's do it differently, because we don't want to be defeated and we are circles in the sand" - that it's impossible to not sing along to the chorus after the first listen.  You're So Good For Me has been a staple in the set for three years now and shows no signs of ageing,

The album then takes a slightly different direction, but none-the-less retaining its ear for a great tune and A To Z Of My Heart attaches a gorgeous soaring melody to it that retains the positive outlook of the record.  It's another heartfelt personal lyric about love - "just when I thought I'd seen everything, you take an A to Z of my heart" - co-sung by Stephen and Clint and it's reminiscent of some of the best moments of The Clint Boon Experience.

That more melodic approach is continued in Calling Out To You, a hand of friendship offered to an acquaintance grieving the end of a relationship.  Like most of the first half of the album, it keeps things simple and is much better for this approach.

It takes the one darker turn for Flying Like A Bird, the slowest most-considered track on the album and it's the one that should dismiss out of hand any concerns that fans might have with the variety and range of Holt's vocals. It also contains a beautiful phonetic backing vocal section from Clint.

Things ramp back up a notch with the euphoric Changes.  A fan favourite since it was first introduced at the 2011 comeback shows it takes a nostalgic look back at "wipe the sweat from your brow back in 76, caribbean chicken on Old Kings Road, King Tubby crackled on the stereo" - its accompanying visuals on the tours have shown the West Indies 1970's cricket team.  The chorus is an emphatic rejection of things staying the same - "I don't care what you say, I don't care what you do, changes".

That slightly nostalgic feel also runs through Hey Now, a magnificent stomp of a song referencing "dancehall sweethearts" and not pausing for breath at any point with Clint taking over vocals when Holt pauses for air, at under three minutes it's a throwback to early Inspirals brought smack bang into 2014.


Our Time starts with their signature organ sound and again the song's simplicity merely serves to emphasise its positivity.  The message of the chorus is unambigious "this is our time" and the backing vocal of "can't keep us down" is almost an anthem for this period in the Inspirals life.  It veers off into a middle eight that's driven by Craig Gill's drums and Martyn Walsh's bass and a spoken word section.

Forever Here feels like a message from Holt to the rest of the band with references to "walking away forever, not knowing what's to come, leave behind the ones you love" in the opening verse turning round into the chorus "here forever, I'm here to stay, nobody ever get in my way" and the second verse "never thought another chance would come."  It's a positive enforcement of the fact that the band are fully functional again, five mates who are having a ball doing something they love doing.

Penultimate track Let You Down is a six-minute throwback to a side of the Inspirals that got lost in the wash at some point early in their career.  It verges on prog-rock with sections that don't at first listen naturally feel like they fit together on their own, but, similar to tracks like Plane Crash and Further Away, but which actually do perfectly.  The main focus of this track will undoubtedly be the guest vocal from John Cooper Clarke, but like the Mark E Smith guest on I Want You, the song stands up on its own without it.

Set-closer Human Shield has the same vibe to it, clocking in at over six minutes.  It's another love song, talking about the subject of the song (assuming its the partner of one of the band) "picking up pieces and keeping them safe" and "tieing threads when they come undone".

The album also comes in a cd/dvd set and this is the one we'd recommend you getting. As well as bonus audio tracks - the original Record Store Day version of You're So Good For Me and its b-side Head For The Sun, 2013's single Fix Your Smile and b-side Save Me as well as Controller, the b-side to recent single Spitfire - the real highlight is a candid set of interviews prior to their June gig at the Band On The Wall in Manchester interspersed with seven songs filmed at that performance.  The lo-fi nature of the film underlines their garage roots and is superbly shot to capture that.  The interviews go right back to the early days of the band as well as telling the story of Stephen returning the fold and the recording of the album.

Inspiral Carpets is everything long-term fans of the Holt-fronted band of the eighties could have wished for and more.  It has all the elements that made them favourites of so many now-veterans of the Manchester scene of the time prior to them hitting the big time with a different line-up, yet it's been brought right up to date without losing anything that made them special.  It's got some bona-fide garage pop classics on it, but it isn't afraid to experiment and stretch the sound as well as slow things down in the middle of the record.

It could have been recorded in 1988 or 2014, yet sounds neither dated or contemporary, just totally timeless. It's by far the best thing they've ever produced, you can't ask a band at any stage in their career for anything more than that.

Their self-titled album is out today on CD, vinyl and DVD and they have a full UK tour planned for December.