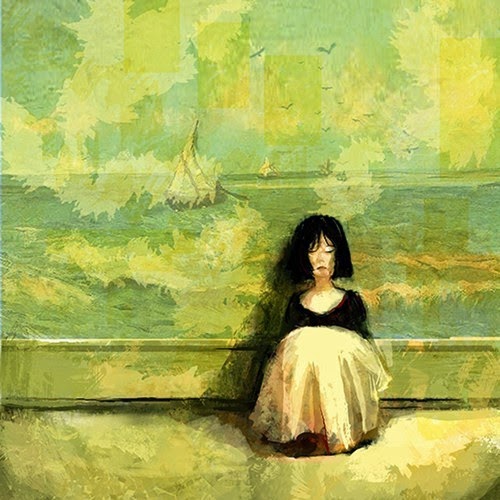 It seems an age, five years to be exact, since Liam Frost released his last solo work, the wonderful We Ain't Go No Money, Honey, But We Got Rain.  He's back with a four-track EP entitled The Wild Places and it shows that time hasn't diminished his ability to produce seductive, intelligent songs as well as producing an interesting take on a 1980s classic.

The Wild Places is the antidote to Liam's recent album with Tokolosh that satisfied his desire to make loud guitar music with a band.  Their album Stay Strong and this EP take the two disparate strands of Liam's first two records - the band sound of The City Is At Standstill and Two Hearts compared to the more traditional singer-songwriter material like Try Try Try and Skylark Avenue - and separates them out.  It's Liam, the singer-songwriter, laying his heart and soul bare without the protection of electric guitars and drums kicking in.

The opening of the title track is reminiscent of early Stephen Fretwell, but once Liam's voice comes in, it's unmistakably Liam, declaring support to an un-named loved one - "take your love and I will shield it.  I'm standing with you side by side in those wild places".  Whilst his voice exudes all that confidence you'd associate with his previous work, there's a beautiful fragility to the music that matches the lyrics.

When I'm Alone clocks in at over five and a half minutes, a brave move for a singer-songwriter with an acoustic guitar given the ever decreasing attention span of music listeners these days. It's hardly singalong material either unlike some of his earlier work.  Again, it feels emotionally taut, on the edge, as if every little bit of emotion is being squeezed out into the song.  It doesn't by the end feel like five and a half minutes, which is a triumph in itself.

Lead track Who's Gonna Love You? lightens the mood musically but the subject matter is equally emotionally fraught, declaring that "I'll hold your love, now those hounds are circling, show your shelter in the dark place that I stand." You'll find it hard not to smile at Liam's very Northern pronunciation of "love" in the chorus, a sign that this music is being made from the heart and true to his roots rather than a desire to compromise in the name of commerciality.

The final track on the EP is a cover of Sade's Ordinary Love, which came from a series of covers Liam published on youtube last year.  This one made it into his live sets and was a huge crowd-pleaser.  Armed with just an acoustic guitar, he makes the song his own, no mean feat given the emotional intensity of the original.

Hopefully this EP is a pre-cursor to a new album.  When I look at artists in the past decade that should have been bigger than they ended up, Liam is close to the top of my list.  If you've not checked out his two albums so far, I'd highly recommend doing so.

However, this EP, as stated earlier, provides an outlet for the softer, more emotional side of his songwriting which sometimes got overshadowed by the poppier elements of the singles off those albums.  It's a beautifully emotional fragile set of songs in a world where male singer-songwriters struggle to show genuine feeling. It's good to have him back.