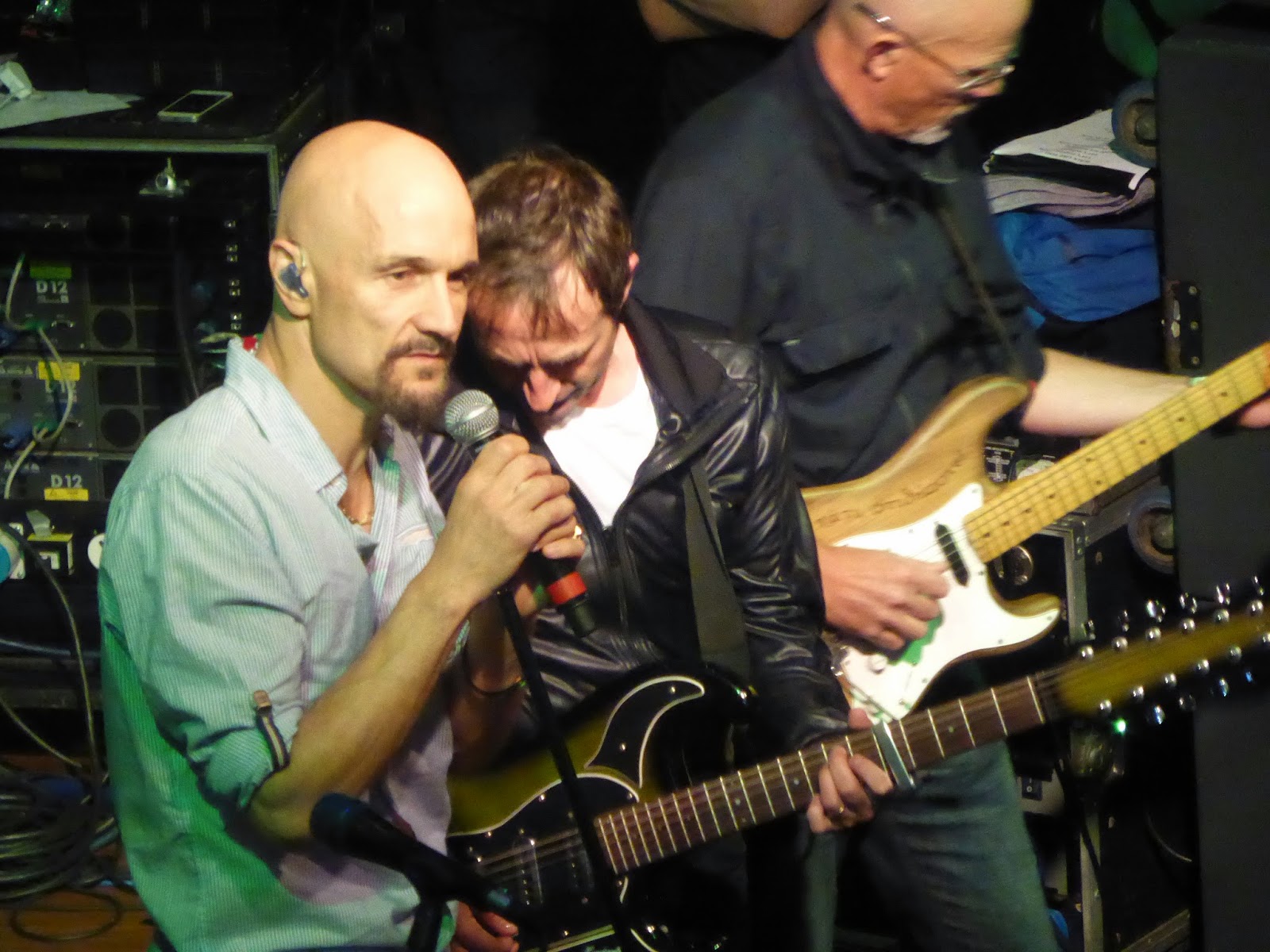 The final stop on James' whistle-stop promotional tour of the UK was a hometown show at Manchester's Hard Rock Cafe for Absolute Radio.  Used to playing to 16,000 people just across the street at the Arena, this 300 capacity venue took them back to their early days of playing to small, enthusiastic and devoted crowds.

It's a mixed crowd in the Hard Rock tonight from competition winners who'd tweeted, Facebooked, texted and would quite possibly have donated an organ to attend to a generally disinterested bunch of guestlist faces upstairs that Tim had to tell, in an inoffensive manner as possible to "fuck off outside if you want to talk" as they chattered about their new clothes and how many times they'd seen Radiohead and fought over dry mini burgers and jacket potato skins.  Sadly we'd positioned ourselves on the balcony rail in front of the latter, but it didn't ruin the show for us.

The set is a mix of tracks from the recent La Petite Mort album starting with the opening nine minute Walk Like You, which has already become a live fan favourite, showcasing James' ability to merge multiple diverse musical ideas into the same song and it not sound horrifically disjointed.  In a new twist, Saul and Larry join together like brothers in church huddled round a lyric sheet to sing backing on the middle section, a sign that they're still trying to challenge themselves by making the song different each time they play it.  Downstairs love it, upstairs bemoan the closing of the free bar and the fact that Darcy and Hermonia couldn't make it tonight. 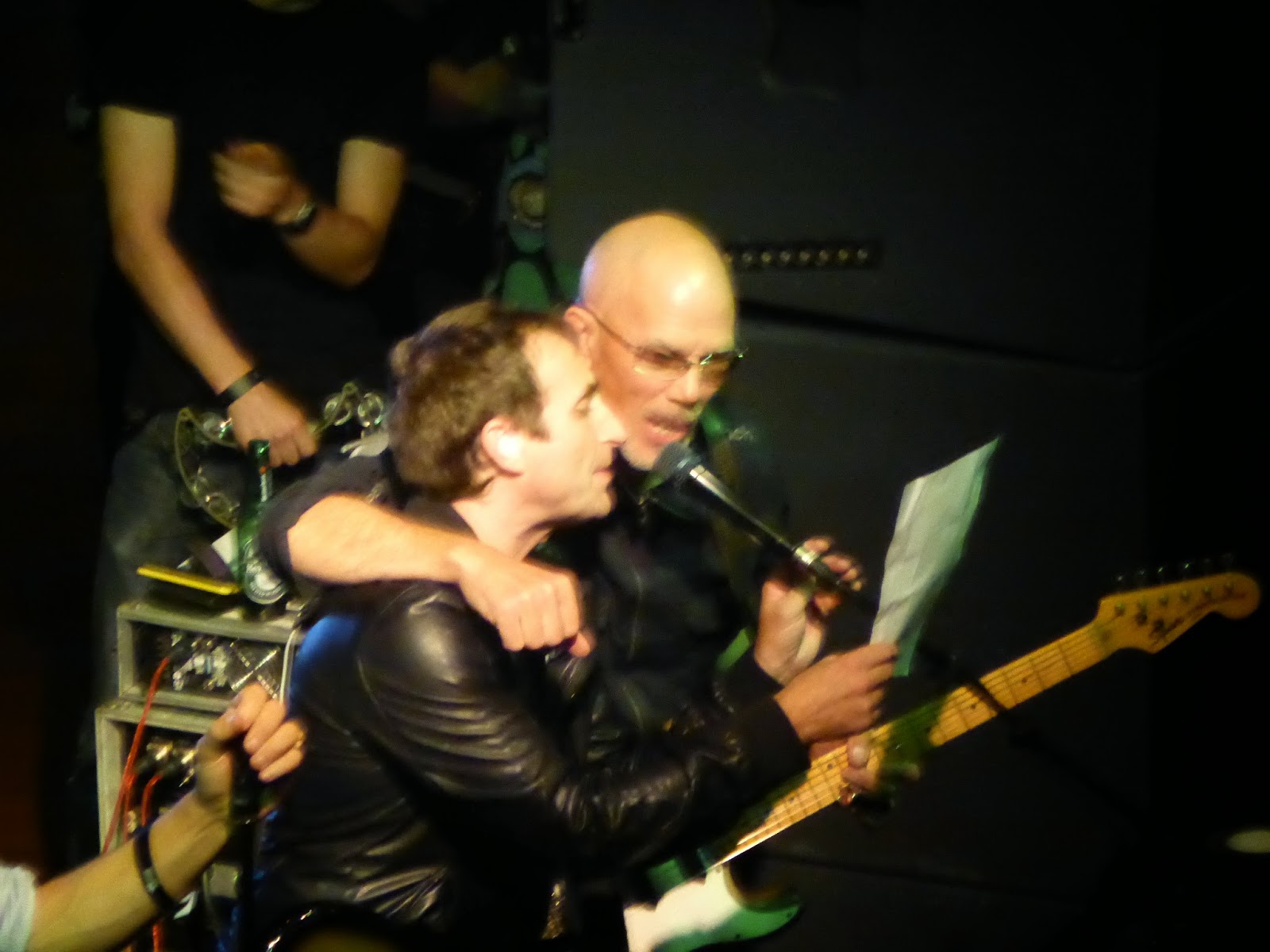 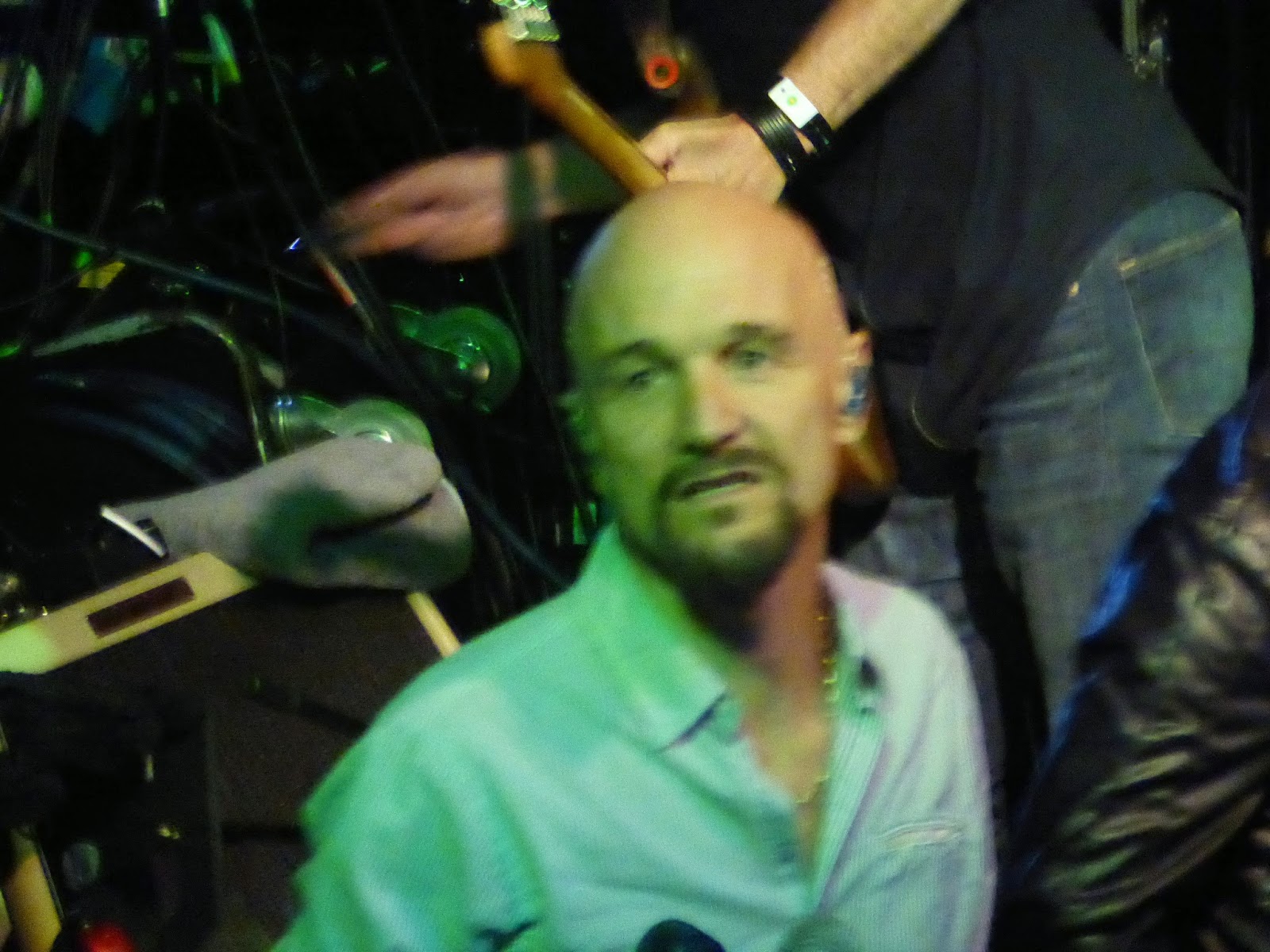 The sound is inevitably a little muddy as the Hard Rock sound system can't cope with the multi-instrumental assault on it that James provide, but no one bats an eyelid as it's rare to get this close and personal with a band of this size.  There's a few technical issues before and after Moving On - but when they get it started it's a beautiful eulogy to Tim's mum and others departed.  The whole downstairs is singing along word for word and even take over at one point when Tim's mic cuts out.  Rather than stop the song, he looks on in wonder before it's fixed for the chorus and makes a point of thanking the audience for singing along as it helps him through songs with difficult themes.

Seven and Ring The Bells follow and show another side of James.  Songs that were built and have filled halls many times the size of this are squeezed into the room and are magically made intimate and fitting for the environment, although you feel that the ending of the latter could literally bring the building down as the bass makes the floor shudder.

It'd be easy, and many other lesser bands would take this route, to simply blast out a greatest hits sets with a nod to one or two more obvious tracks on the new record and everyone would go home happy, but that's not their style.  PS, a gorgeous melodic track laced with venomous lyrics, is probably wholly inappropriate for this type of event, yet James make it feel like just the right thing to play.

You'd probably say the same about All I'm Saying, except that it's been chosen as the next single.  It's a song with deep personal meaning for Tim, being about the death of his mentor.  He stops it before the first verse to admonish the crowd upstairs for talking and issues advice on what to do if they don't want to listen and Larry later points out one miscreant and stares at him constantly till he shuts up.  As it builds to its climax, it's impossible to ignore the look on Tim's face, this is a very public catharsis of something incredibly personal.

Sometimes has the whole place singing along even the chatterers at the back upstairs.  It's the big song of the evening, the crowd picking it back up and making them come back in.  It's magical when this happens spontaneously as it does tonight.

Typically awkward they switch back to Dream Thrum, a beautiful wisp of a song from the Laid album.   It feels like they'll being wilfully difficult refusing to bow to what's expected at these types of events.  Simply running through a greatest hits set isn't for them, so in a way it's actually exactly what we'd expect from them.  Interrogation follows and is cut short.  It's a fabulous song with an incredible groove and a break down section that hits at the core of what makes James a special live band, but they curtail it tonight which is the one real disappointment of the evening other than the spring rolls not making it round to where we were stood.

They finish the main bit of the set with a bang.  Come Home sounds nothing like a 25 year old song, it spits at you, it pokes you in the eyes and yet you can't help but love its ramshackle rumbustious charm as Tim exorcises another set of demons in a communal celebration.   Curse Curse, either by technological mishap or intent, loses the big disco intro tonight and is more guitar-driven than any point since its first airing last summer.  Love or loathe the recorded version, live it gets the crowd going and again downstairs is singing along every single word. 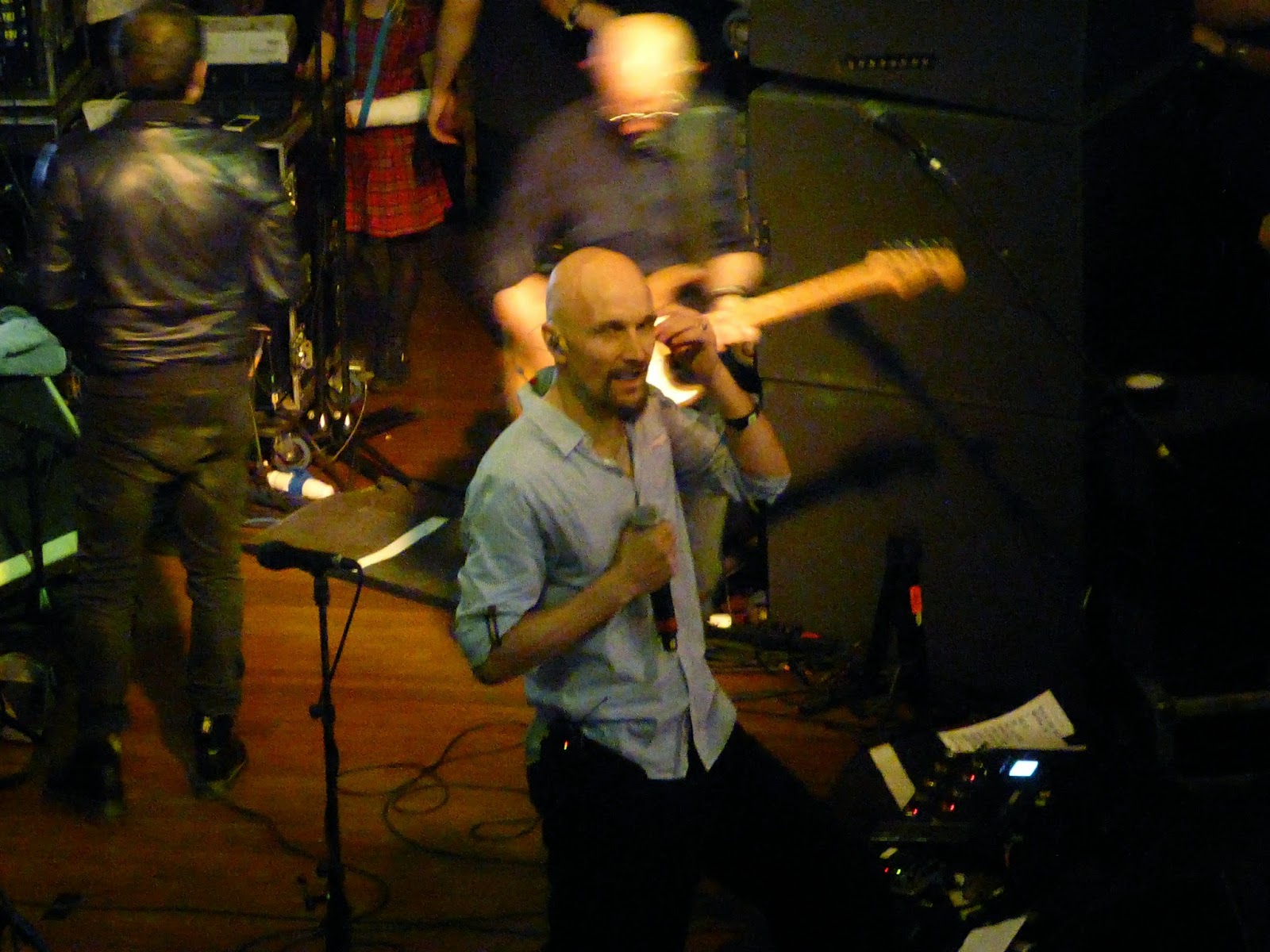 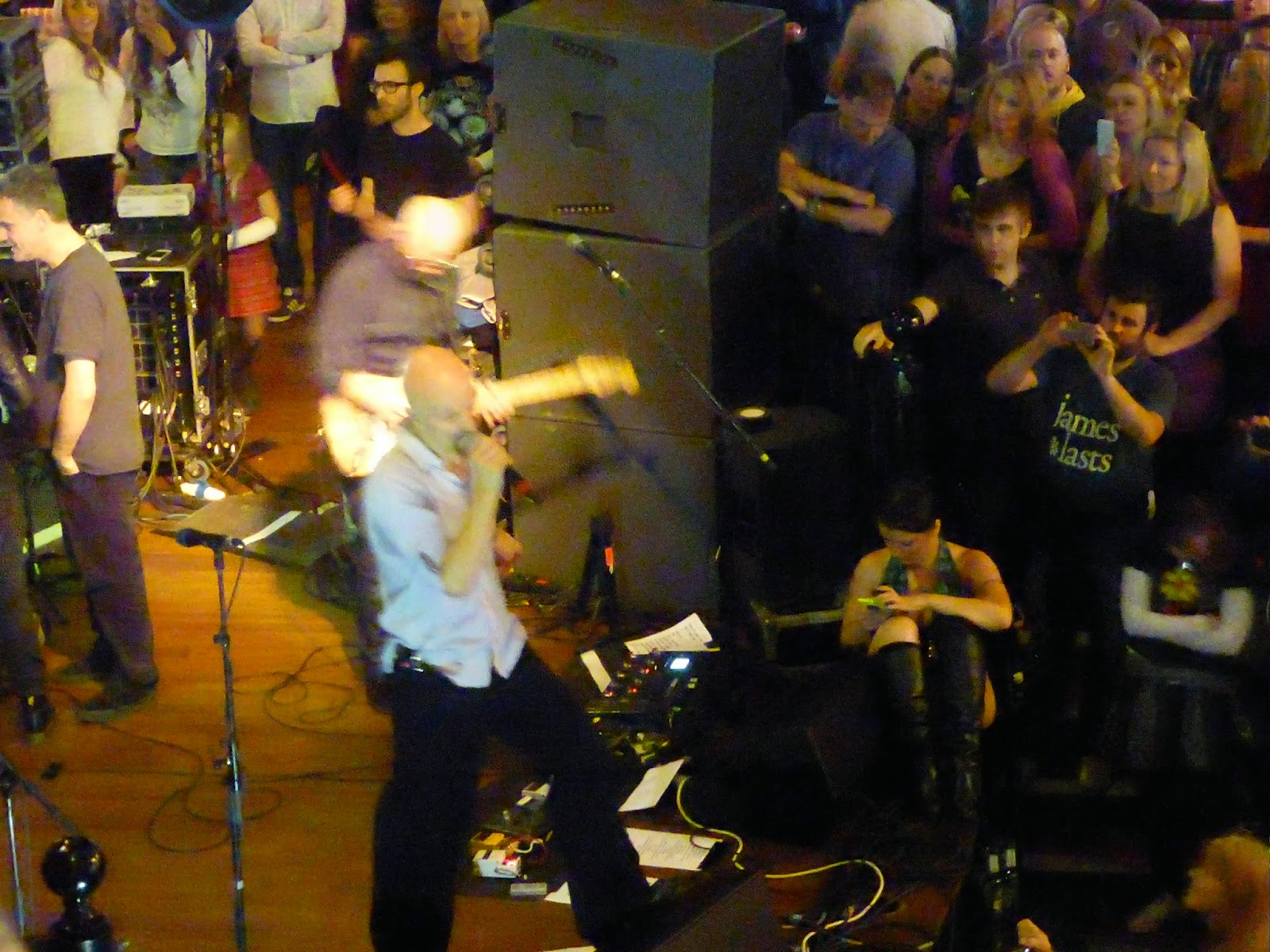 We are then given a choice of Tomorrow or Top Of The World and the audience cheering is to determine which one gets played. Usually there's a clear winner in such situations, but tonight there isn't. Saul shapes to play Tomorrow, but they settle on Top Of The World and he concludes the song with a beautiful violin piece that just adds fuel to the argument that it's an instrument he should pick up much more.

They nip out into the Printworks entrance for a photo shot before the noise draws them back for a set-closing Say Something.  It's a crowd-pleaser to send everyone home happy as the whole place sings along.

A few years ago, John Bramwell from I Am Kloot infamously stopped one of these gigs after four songs because of the wall of chatter from the non-fan guestlist, referring to the Printworks area as "Twatsville".  James didn't need to do that tonight, but by sheer force of will and the ferocity of their performance in less than ideal circumstances they delighted the 200 or so who were there to listen to them and felt privileged to be there.  The less said about the rest the better.

James played Walk Like You, Moving On, Seven, Ring The Bells, PS, All I'm Saying, Sometimes, Dream Thrum, Interrogation, Come Home, Curse Curse, Top Of The World and Say Something.


James' official website can be found here, where you can find details of their November arena tour.   They are on Facebook and Twitter.   Some of the band - Tim, Larry and Dave - are also on Twitter.