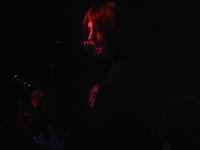 The addition of one of our favourite new bands Blossoms to the James bill for the opening night of their La Petite Mort tour was a pleasant surprise.  Like every step that’s been put in their way so far, they hurdled it effortlessly with aplomb.


It’s a sign of a band that’s going places that they can simply move from playing to 50 to 100 people on the emerging band circuit of venues, as we saw Blossoms at Liverpool’s Shipping Forecast last month, to take to a stage twenty times the size and not look or sound at all uncomfortable up there.  Mark our words, by the end of 2015, Blossoms will have made venues this size and larger their own.

Tonight’s set draws mostly on the familiar although they’re already at the point where they can leave songs like Lava and Scattered Rain, which have become crowd favourites, out of the set and introduce new material (to our ears and we didn’t quite catch the title) with the lyrical quality and romanticism of “I miss you, the stately homes of England, how beautiful they stand, lately it’s a lonely love I know”. 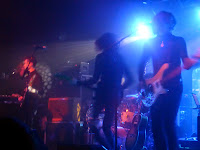 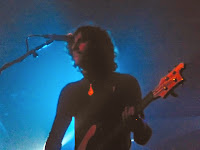 They already look the part in their matching black turtle necks, but it’s just a small part of their stage presence that’s becoming increasingly imposing as they experience nights like this and their recent ones with The Courteeners.  There’s a justified self-belief and when you have stone-cold classics like You Pulled A Gun On Me and set-closer and debut single Blow in your repertoire this early on in your career then that belief can’t be dented.  My Favourite Room sees Tom pick up an acoustic guitar mid-set and demonstrates that there’s more variety to their work already than most bands get at their debut album stage.

James have always had a reputation for their support bands going onto greater things – Radiohead, Happy Mondays, Inspiral Carpets, Stereophonics to name a few – I think we can add another one to that list.

You can read our interview with Blossoms from August here.