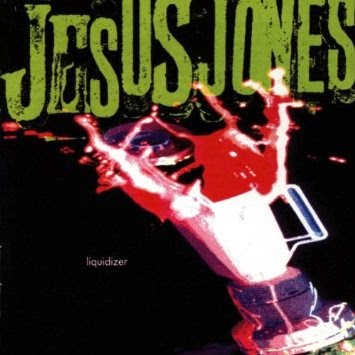 Twenty-five years on from its release, Jesus Jones' debut album Liquidizer gets a deluxe 2 cd plus dvd re-issue.  As perhaps the defining album of my first six months at University, it feels only right and proper to revisit it.

I hadn't heard of Jesus Jones when one of my fellow freshers suggested going to see them at the LCR at the University of East Anglia in Norwich in October 1989.  It appeared not many others had too as the gig was poorly attended, but with only a quick listen to a couple of singles to go on, Jesus Jones blew me and the other fifty or so away so much that the first thing I did the next day was buy the tape in town and that, plus the album t-shirt (which lasted a decade), became the soundtrack to that first term.

Whilst Liquidizer reached the not unimpressive 31 in the UK charts, Jesus Jones went on to greater success with the follow-up Doubt, which soared to number 1, broke them in America and which spawned big hit singles Real Real, Real, International Bright Young Thing and Right Here, Right Now and their third album Perverse, which reached number 6. However, it's Liquidizer that, for me at least, remains their definitive album and their masterpiece.

Straight away from looking at the track listing, you know this is a proper retrospective with the band involved, a theme repeated across the other three album reissues.  Firstly, the two CDs are rammed to capacity with music, the remaining space on the album CD being taken up by a BBC radio session and five live tracks and disc two boasting twelve singles / b-sides / remixes as well as five previously unheard versions of album tracks, rather than just giving us the album and feeling we've been robbed of 30 minutes for purchasing the record over again.

The album itself is a high-octane blast (it doesn't drop below 110bpm) that mixes synths with dance beats in a way that so many of their contemporaries at the time tried and failed to do.  Whilst there's nothing of the catchy singalong nature of EMF's Unbelievable here, this is a complete album with enough variety to keep the listener interested which was never the case with that song's accompanying Schubert Dip album.  Whilst the twelve tracks have the same basic ingredients, each track has a personality of its own that stands it out from those around it without taking the foot off the accelerator pedal.

As such it's an album whose success is measured by the fact there isn't a genuine standout track on it, because there isn't a weak one on it.  Of course their debut single Info Freako is the album's calling card, the samples of what sound like car brakes failing to bring the song screeching to a halt over its two minutes fifty seconds.   Even shorter are the two follow up singles Bring It On Down and Never Enough and this is why the album has such an impact - there's no attempt to drag songs out, to show off, it's a short sharp smack in the mouth of an album, the samples never get tired because they don't hang around long enough to do so and partially because, as explained in great detail in the fascinating sleeve notes, the technology of the time was quite futuristic and in many ways Jesus Jones were breaking new ground with Liquidizer.  Certainly there was no one sounding that way at the time, hence why the album became such a firm favourite.

There's a disc and a half of bonus audio material to go with it.  Like so many of the bands this is mixed in its quality and relevance.  The necessity to fill up multiple formats to try and boost chart positions meant that as well as the traditional b-sides releases were cluttered up with remixes and alternative versions.  Jesus Jones fans faired better than most in this respect.

Broken Bones was a surprising exclusion from the album and would have fitted it perfectly as would Cut And Dried and It's The Winning That Counts.  There's a cover of Crazyhead's I Don't Want That Kind Of Love, from their label Food's Christmas EP where bands covered each other's songs, the treatment a pointer towards the more reserved less sample-based approach they would take on Doubt.


Info Sicko and Enough - Never Enough sound like alternate takes of the tracks with new thoughts on the sampling and song structure and are definitely of interest even to the casual listener, Beat It Down is an interesting sampling work out, the Ben Chapman mix of Move Mountains is subtler and doesn't quite pack the ferocity of the album version and the ten minute Liquidised mix of Bring It On Down flirts playfully around the original.

However, not all of them, as was common with most bands of the era, are as successful - the "Extended" What's Going On adds a mere twenty five seconds to the original, None Of The Answers is a series of vocal samples over a rather uninteresting beat and the Dance Extravaganza version of Info Freako entitled Info Psycho is actually way less danceable than the original. They're interesting in some respects to listen to once, but not something you're going to go back to and listen to over and over in place of the album itself.

There's five previously unreleased versions of album tracks.  The first two are David Motion versions of Bring It On Down and All The Answers, initially slated for release as the follow-up to debut Info Freako.  Both are stripped of most of the sampler effects of the later versions and turn the guitars up making them sound quite different from the album.  The Rough Mix of What's Going On is instrumental and combined with the Monitor Mix of The Real World show how much technology was used to take the raw song material and craft it into the final album versions as does the scratchy but rather brilliant demo version of Info Freako, which also appears without vocals.

There's an Andy Kershaw BBC radio session from May 1989 and five songs from a live promo CD recorded in Chicago in 1991 which shows just how much Liquidizer reflects the band's live sound at the time.


The DVD features the promo videos for the singles.  Most of them focus wisely on the vibrancy and energy created by their live set.  Info Freako is a studio-shot live performance complete with Mike's back-to-front hat and Stussy hoodie, signs of the times and their always dubious fashion sense. Never Enough is higher-budget, fusing a live show with separate crowd-footage interspersed with made-up newspaper headlines claiming Jesus (Jones) are bigger than the Beatles.  The best of the three is Bring It On Down, with Mike centre stage whilst all around him the rest of the band and a range of colours and images zoom chaotically in and out.  It's low-budget, but it fits the song perfectly.  There's two videos for their cover of Crazyhead's I Don't Want That Kind Of Love recorded in a London karaoke shop, one without guitarist Jerry who hadn't made it out of bed for the first shoot.

There's also five tracks from their sell-out London Forum show from October 1990, the quality of which isn't much better than your Camden market stall bootleg video of the time, but it captures the raw energy of their live shows with two songs from the album (Song 13 and What Would You Know?), three previews of the tracks they were writing for Doubt (Are You Satisfied and Who? Where? Why? made the album whilst Damn Good At This ended up as a b-side).  As the best record they have from an age that wasn't dominated by mobile phone and camera recordings of shows, it's a vital document of the band as they were at the cusp of breaking big.

Liquidizer is an album that still sounds fresh and imperious twenty-five years after its release despite the obvious advances in technology that has rendered the techniques used in making it obsolete. It's brimming with the DIY ethic, it's an amalgam of all the ideas they had floating around in their head at the time being laid down as opposed to an attempt to make a hit record.  The additional material, whilst a little hit and miss at times on disc 2, adds to the story of the album and make this an unmissable purchase for fans of the band and someone who wants to discover them at their raw best before the rough edges were smoothed down.

Liquidizer, as well as deluxe versions of Doubt, Perverse and Always, is out now.