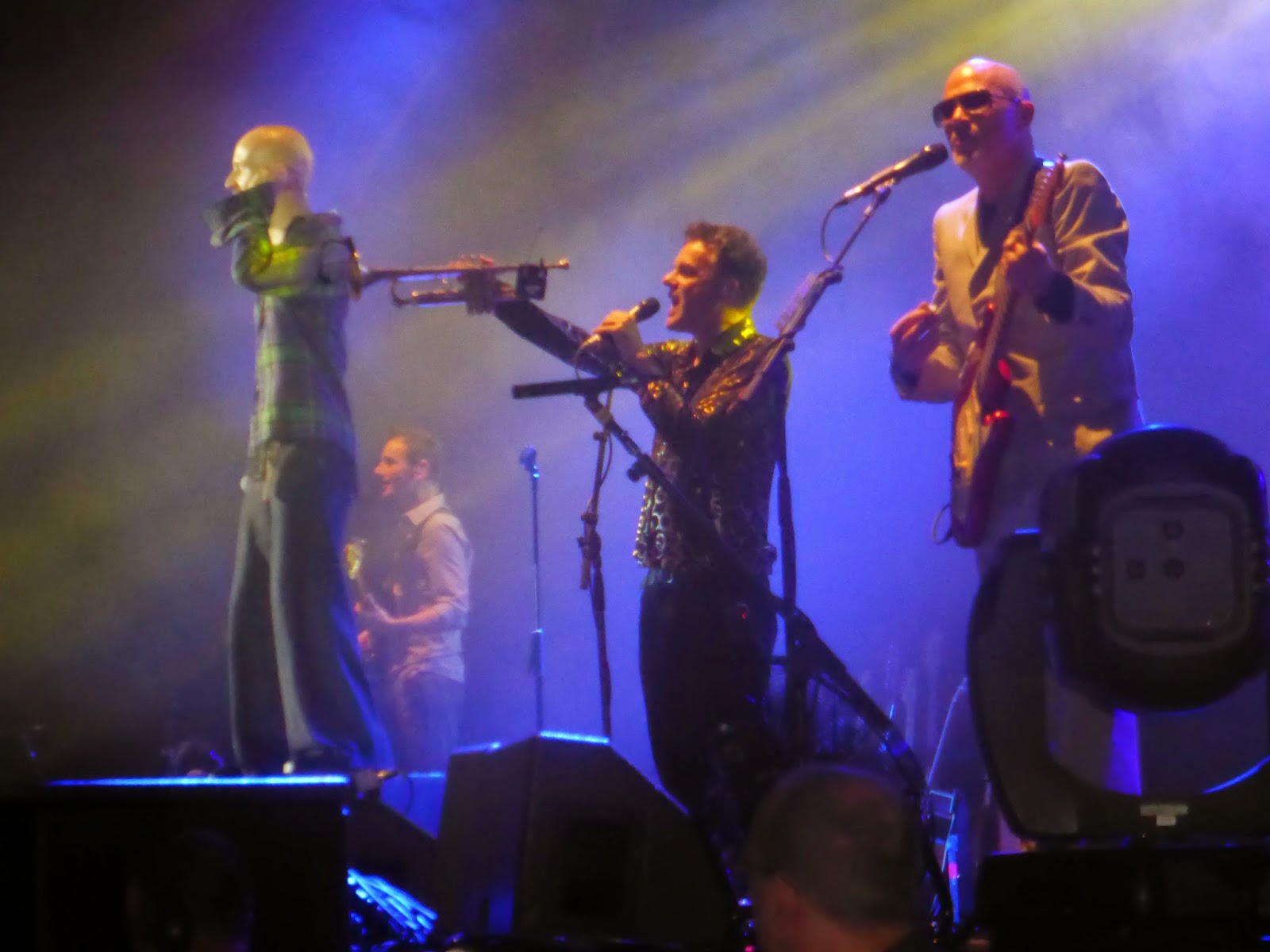 Saturday night in Glasgow is no place for the faint-hearted and so James got (most of) their hits out for one of the biggest shows of the La Petite Mort tour.


The Hydro has garnered itself something of a bad reputation for sound since its opening last year, but there’s no real problems with the sound tonight where we’re stood is fine and the venue works in the sense that there’s a decent vantage point pretty much everywhere.

Tonight’s set is geared towards the Saturday night crowd.  Whilst there’s still six songs from the new album and All Good Boys and Greenpeace retain their place, the rest of the set aims to generate a celebratory atmosphere rather than a listening crowd.  This comes to a crux when Tim stops All I’m Saying because, despite requesting a few minutes silence so he can sing this song that’s very difficult for him because of the subject, the crowd don’t and he can’t carry on over the noise.  It’s a shame that the crowd couldn’t respect that wish, but then it’s difficult to shut up eight thousand people for a few minutes when a large chunk of them have been on the lash all day. 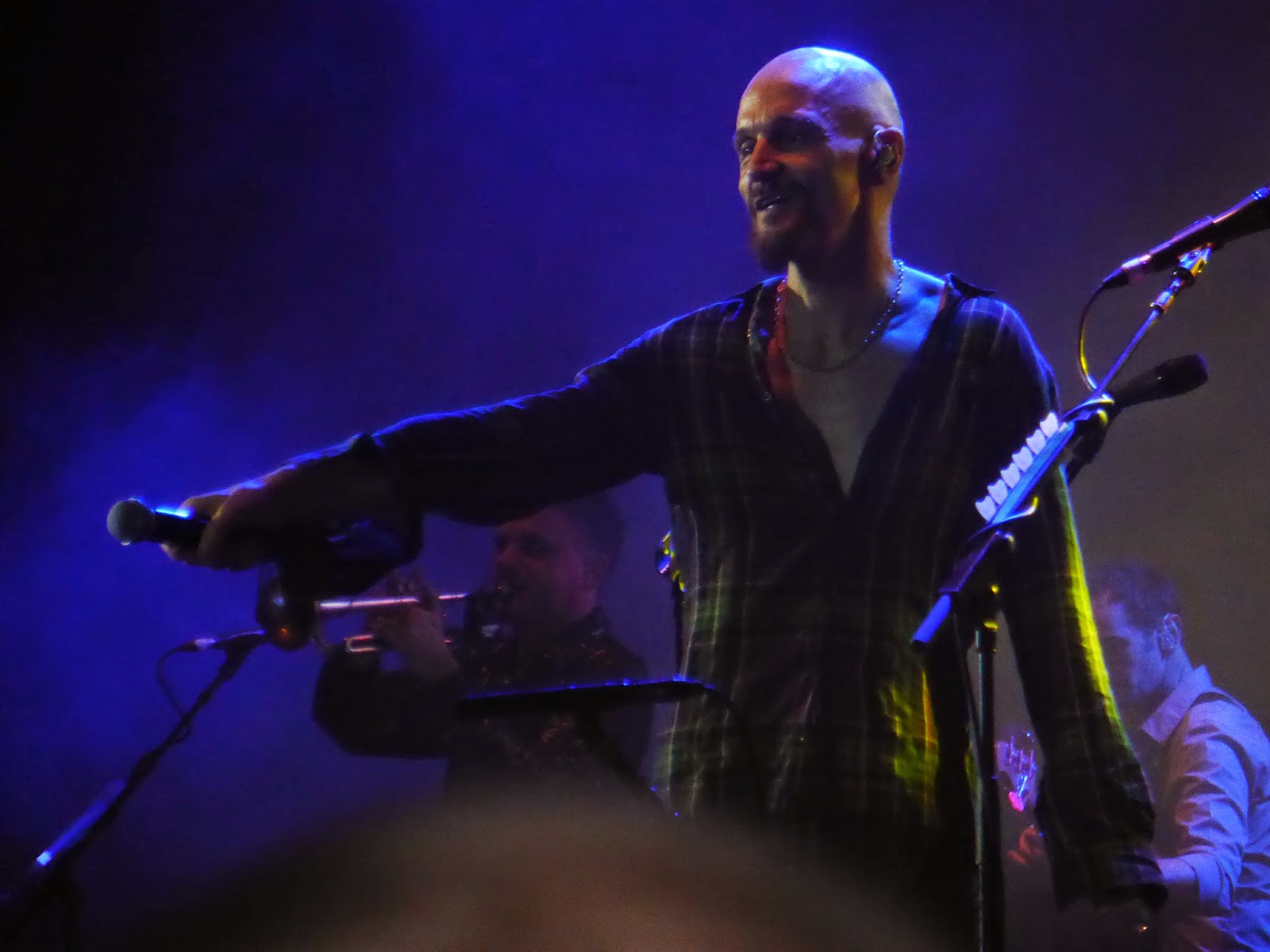 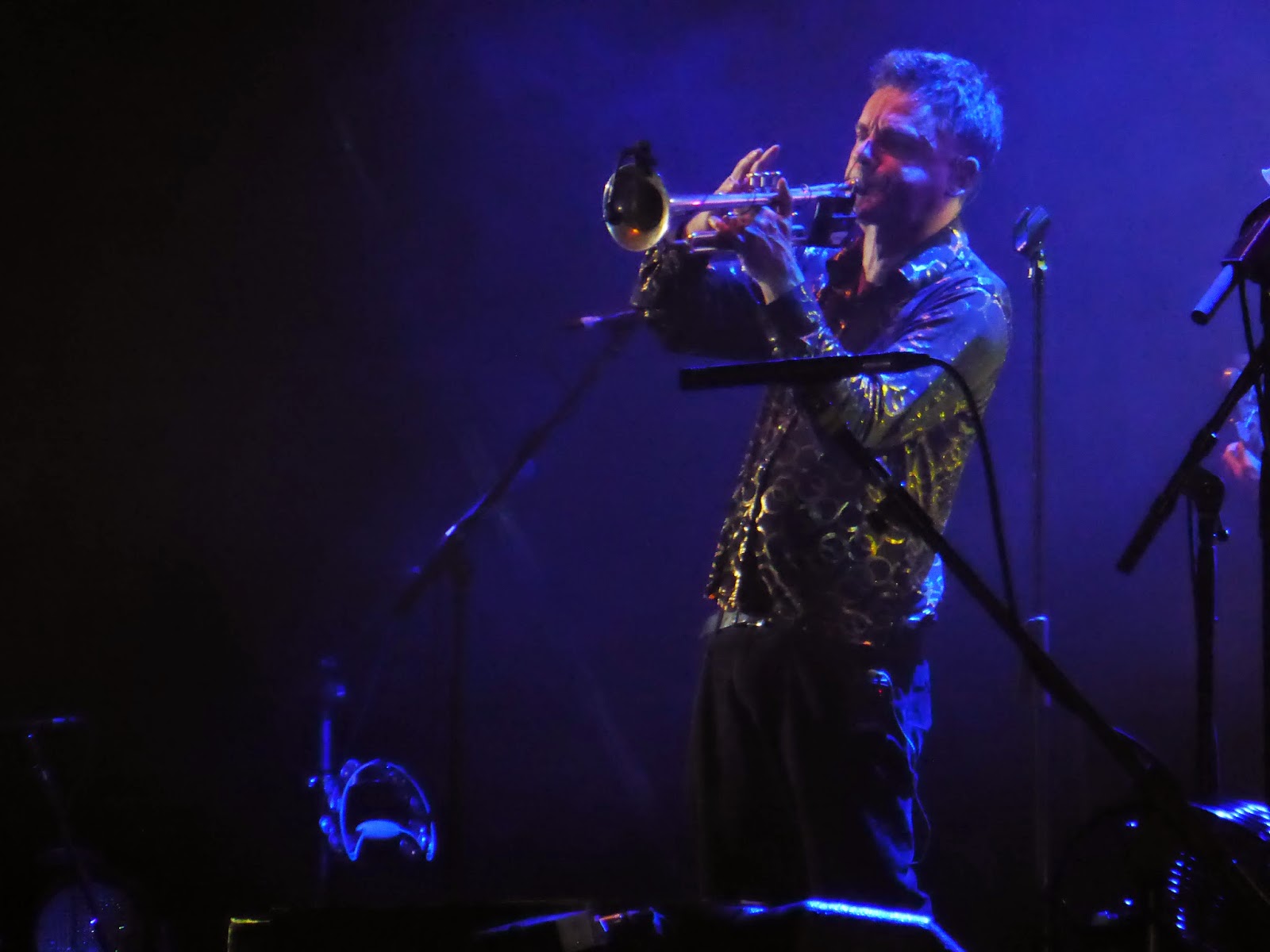 The tone of the show is set by the opening Lose Control when Tim, Larry and Andy walk through the crowd.  The venue layout doesn’t really lend itself to this working as the only seats that can access the route to the stage are not raised very high so most of the floor can’t see what’s going on.  But they just take the song and make it their own almost drowning Tim out in the process.  Seven has a sea of arms raised in unison and Walk Like You, with its many different sections and improvised outro keeps the atmosphere at fever pitch. All Good Boys surprisingly works in this environment, it feels made for these bigger stages, particularly as it builds to the five-voice crescendo at the end. It feels and sounds like a lost classic. 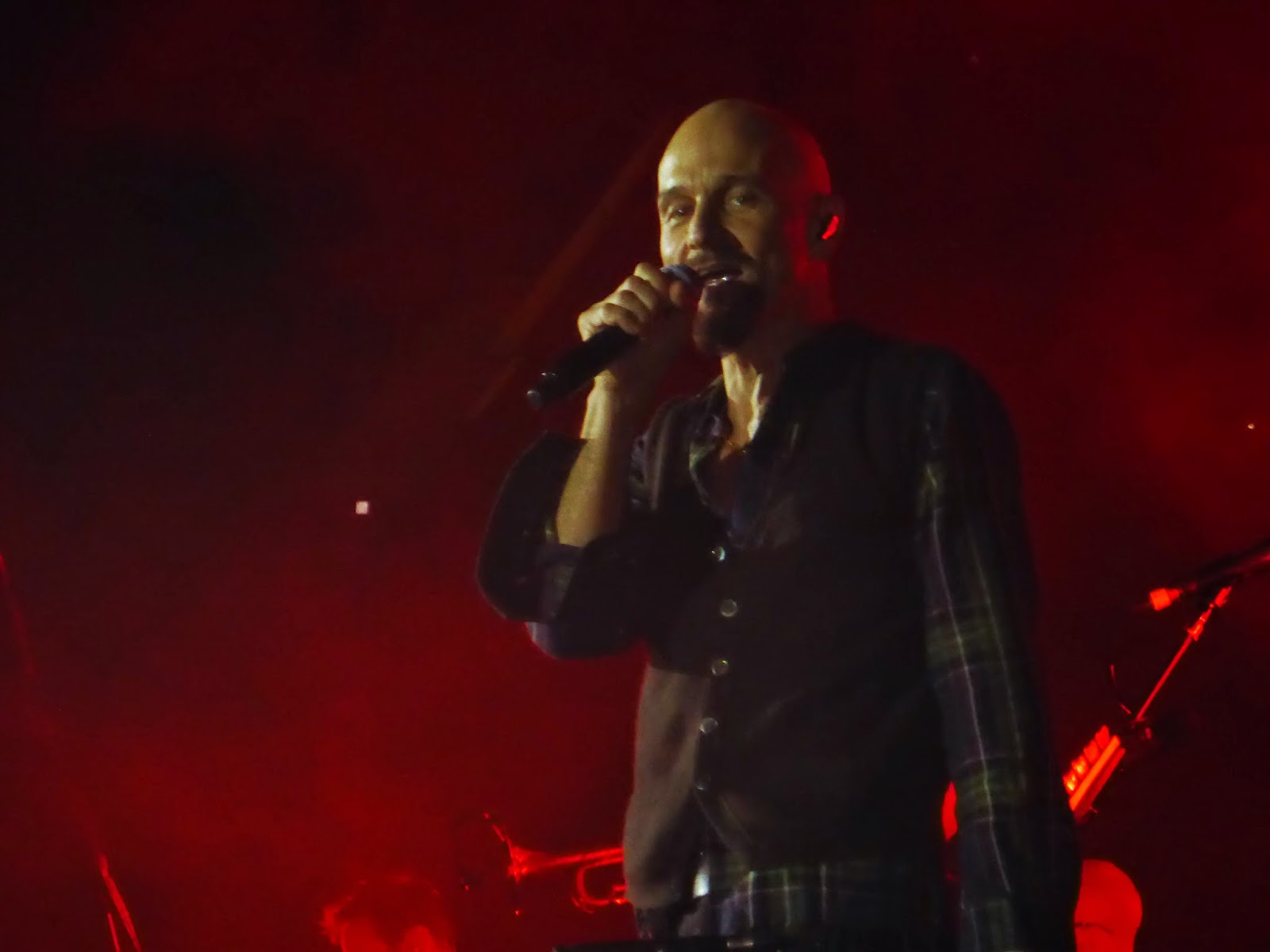 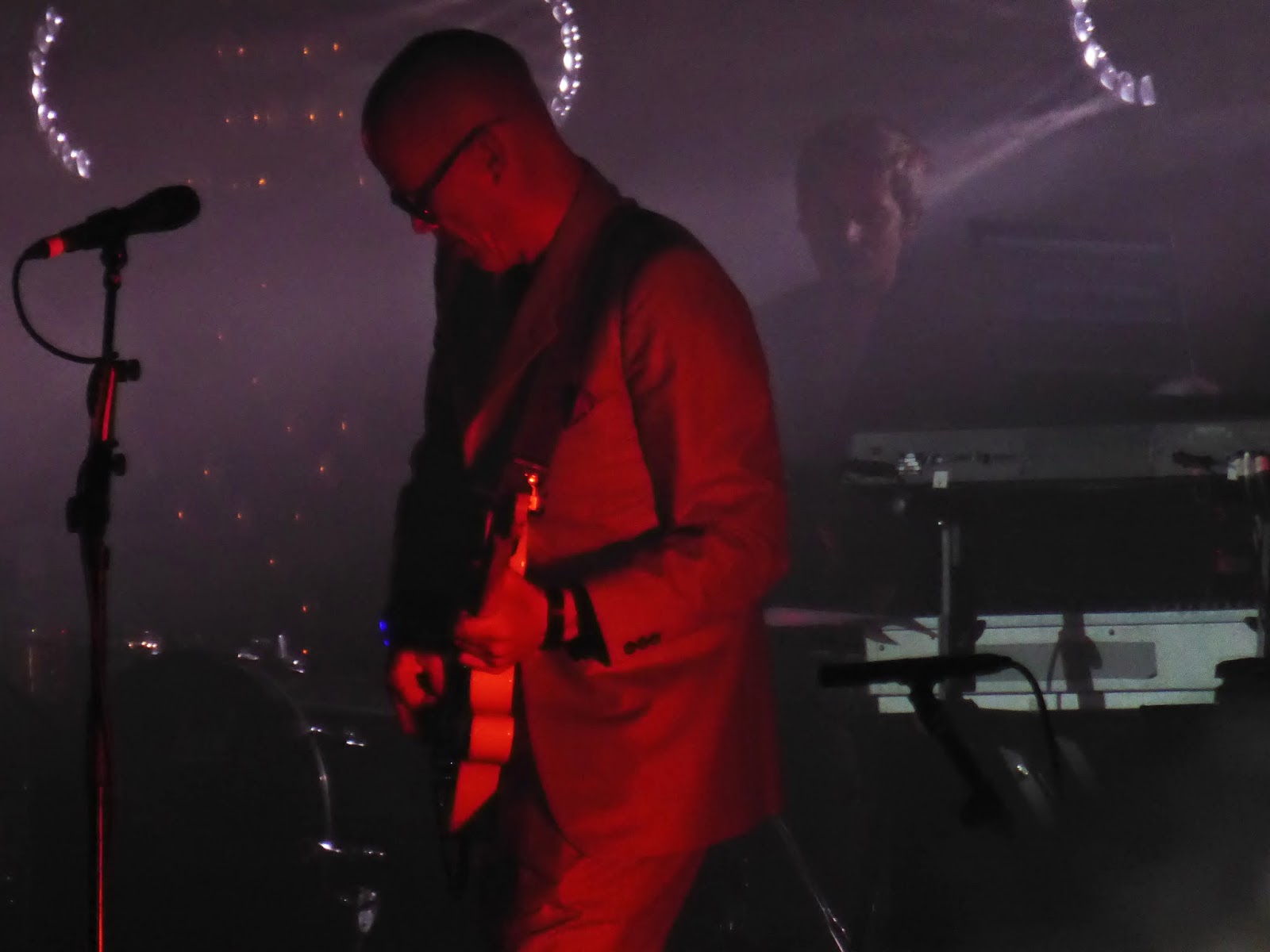 Sound has Tim musing on the fact that there’s something beautiful about men singing the “mah bah ooh” part of the song. Tonight it fills the hall, dark and rumbling, slightly menacing, lit up by stunning use of the backdrop and the big lighting rig.  Curse Curse, which Tim later says he should have changed to “Maloney shoots and scores” in the presence of friend and Scotland manager Gordon Strachan, really turns the heat up, people losing themselves in a heady mix of the electronic vibes of the song, ferocious lighting and a hazy fog of alcohol.  Tim goes crowd-surfing half way through the song as well yet still manages to hold everything together as he sings lying chest-down on a sea of arms. Laid has Tim down on the barrier again and helping a crowd surfer up on to the stage to dance with him.  The reaction of the audience tells you why many bands see Glasgow crowds as one of the best to play to.  Hymn From A Village hammers that point home as well.

Then things turn slightly sour with the All I’m Saying incident.  Thinking about how often Tim went down into the crowd tonight, far more than he normally would, suggests that the distance and height from the crowd meant he was having trouble getting the connection he wanted.   They play Quicken The Dead as an alternative and then it all gets forgotten as the venue is turned into a mass of waving arms as they go into Out To Get You, a song that’s been on quite a journey from its initial place on the Lose Control b-side to one of the band’s most loved songs and one that guarantees a fabulous reception whenever they play it.  Getting Away With It, with Tim humming the intro section, has the whole place bouncing again and everything is forgotten. 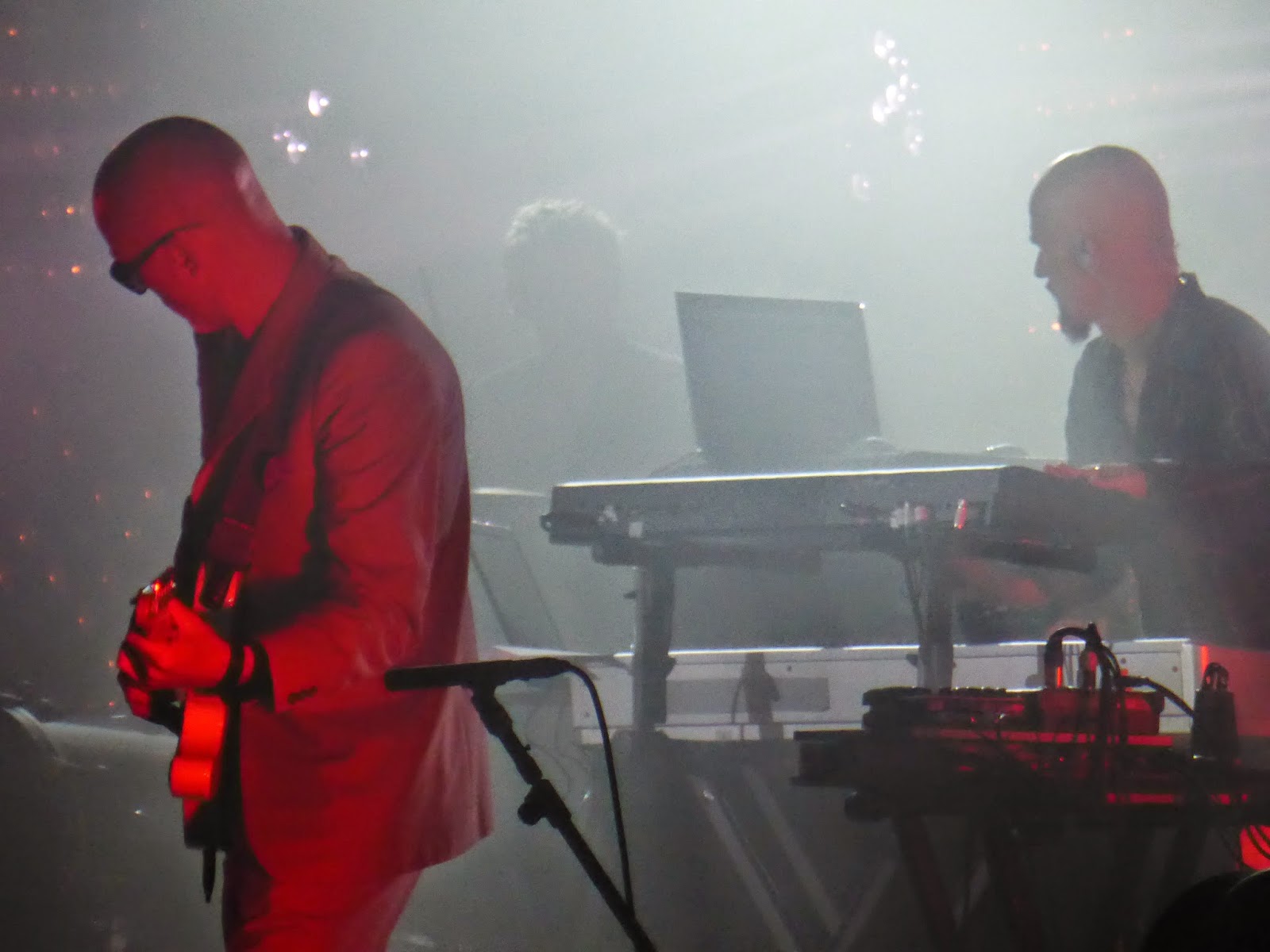 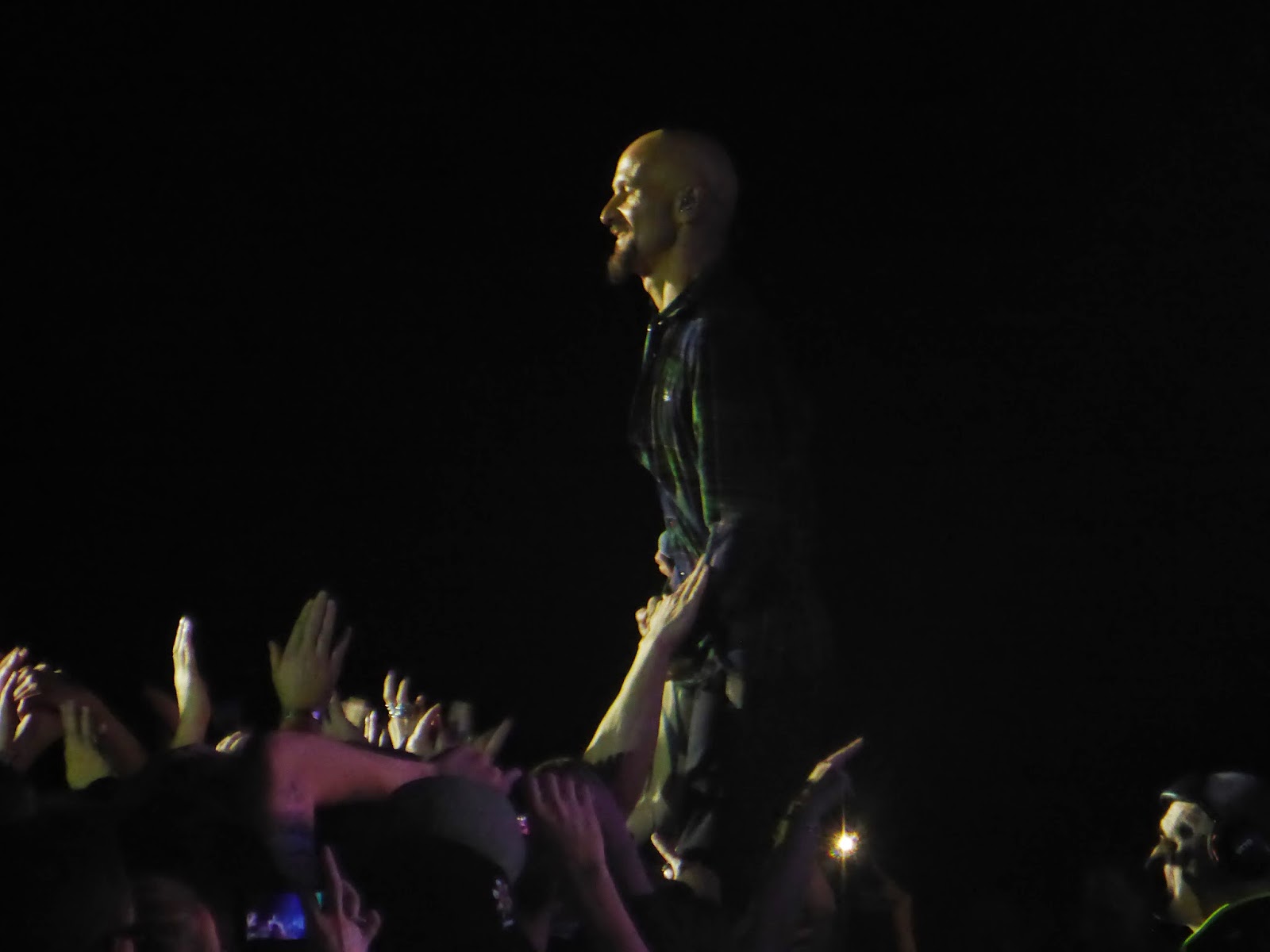 Greenpeace looks and sounds stunning, but as Saul alluded to in the soundcheck, it does feel like it gets slightly lost in these big arenas. It’s not a song an audience can do a lot with given the contrast in pace and volume of the various sections except stand and stare at its sheer power.   Stutter is a very different beast as it rumbles its way to its manic conclusion, bulldozing everything in its way.

Just Like Fred Astaire is simply jaw-droppingly beautiful, the song, more than any other, they’ve absolutely captured the essence of on this tour.  Gorgeous swooping keyboard, vocals that enhance the expression of love apparent in the words.  Moving On gets the warmest reception of all the new songs tonight, the sentiment touches most of the people in the room in some way and there must be a cathartic effect of thousands of people singing back to you something incredibly personal.   Gone Baby Gone, once again, is the highlight of the new songs though and Tim helps another dancer up on stage for this one. 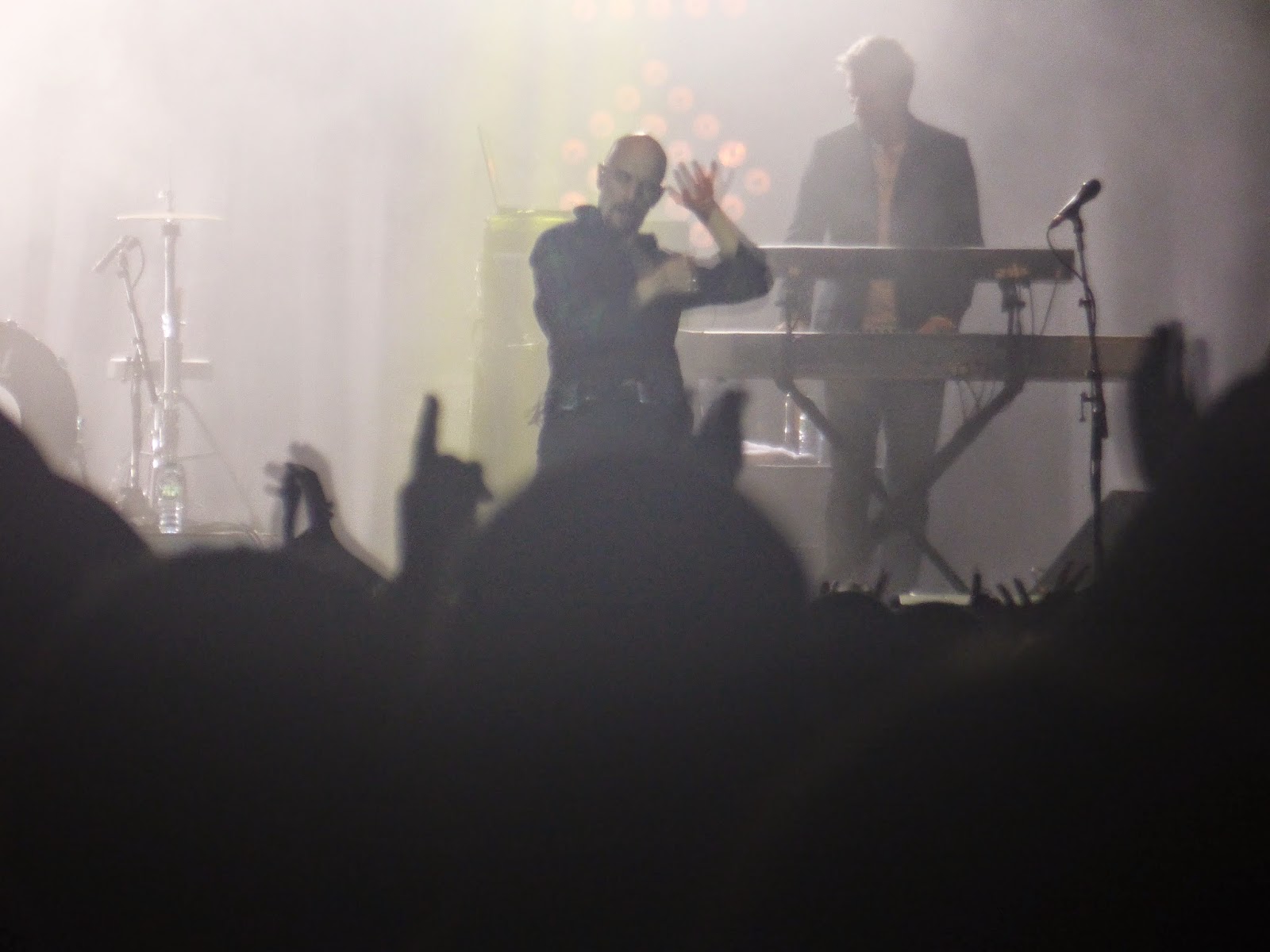 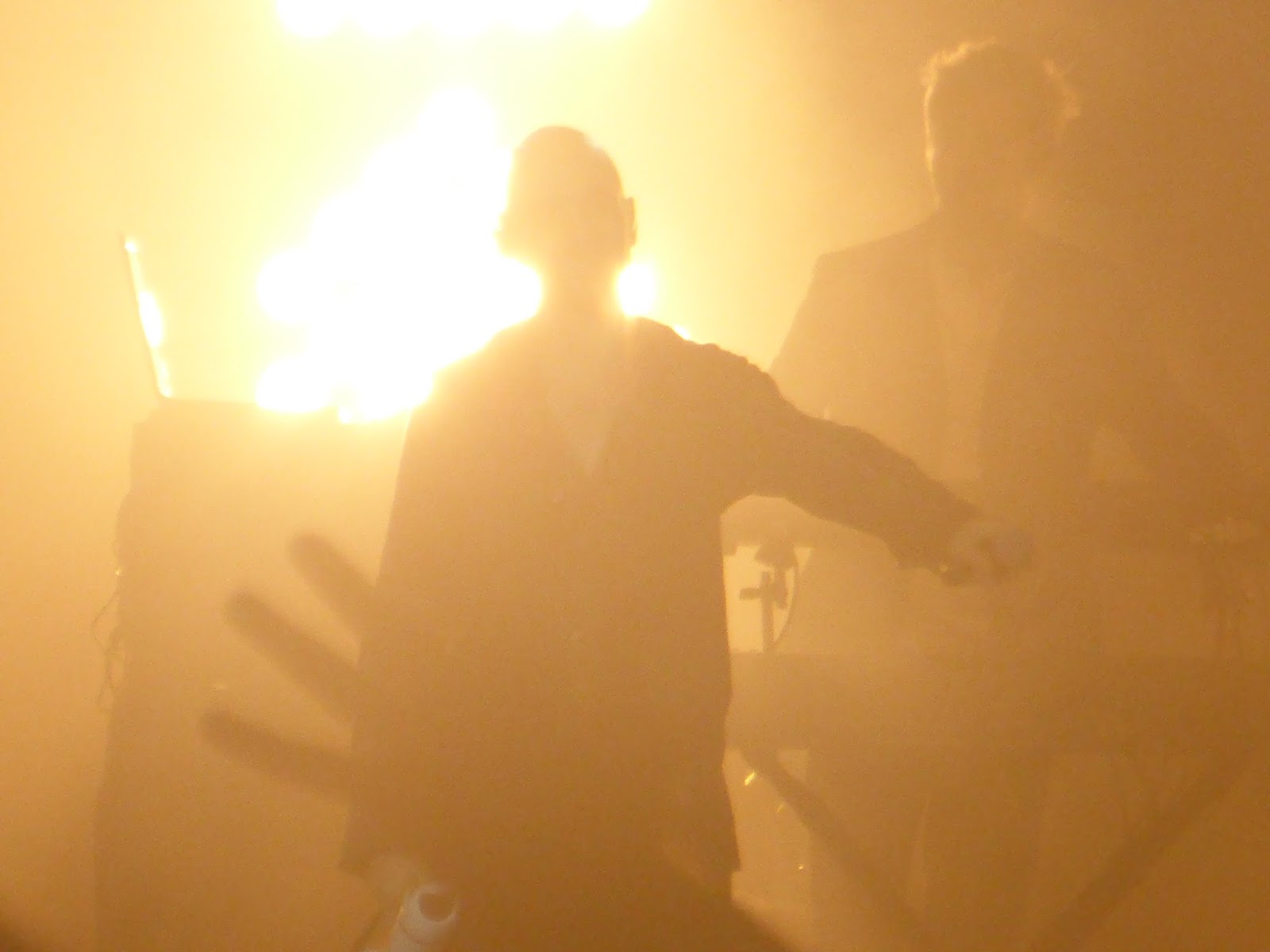 Come Home and Tomorrow finish the main set and see Tim back down in the crowd surfing, although some people get a bit too close and personal prompting him to ask if “the person who stole my penis can give it back”, a change from when someone stole his shoe at the Barrowlands in 1990.  Come Home gets stretched out as Tim can't sing because of the attention he's getting so it loses its way a little as they scrabble to keep the song going, but they manage to rescue it. 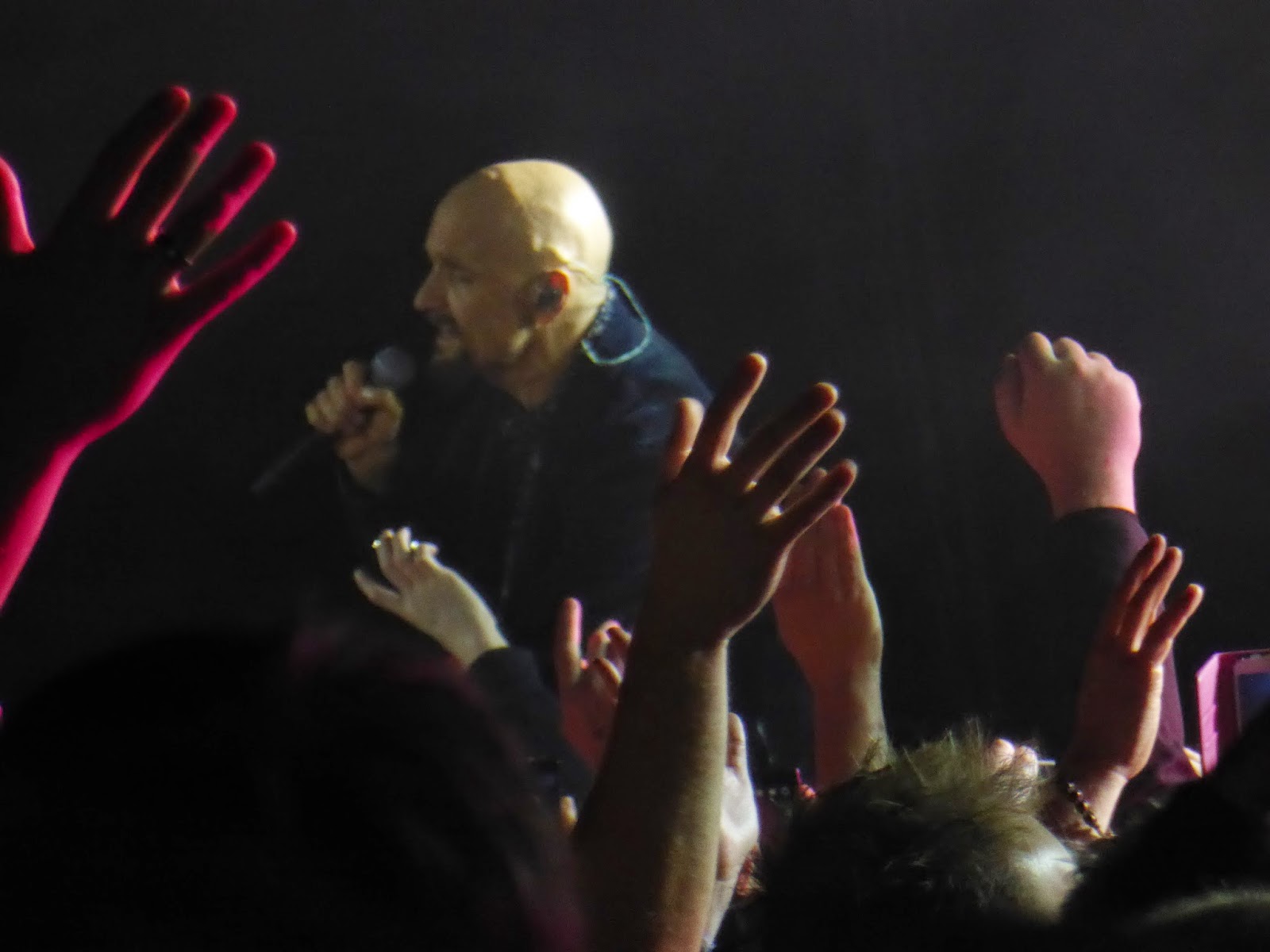 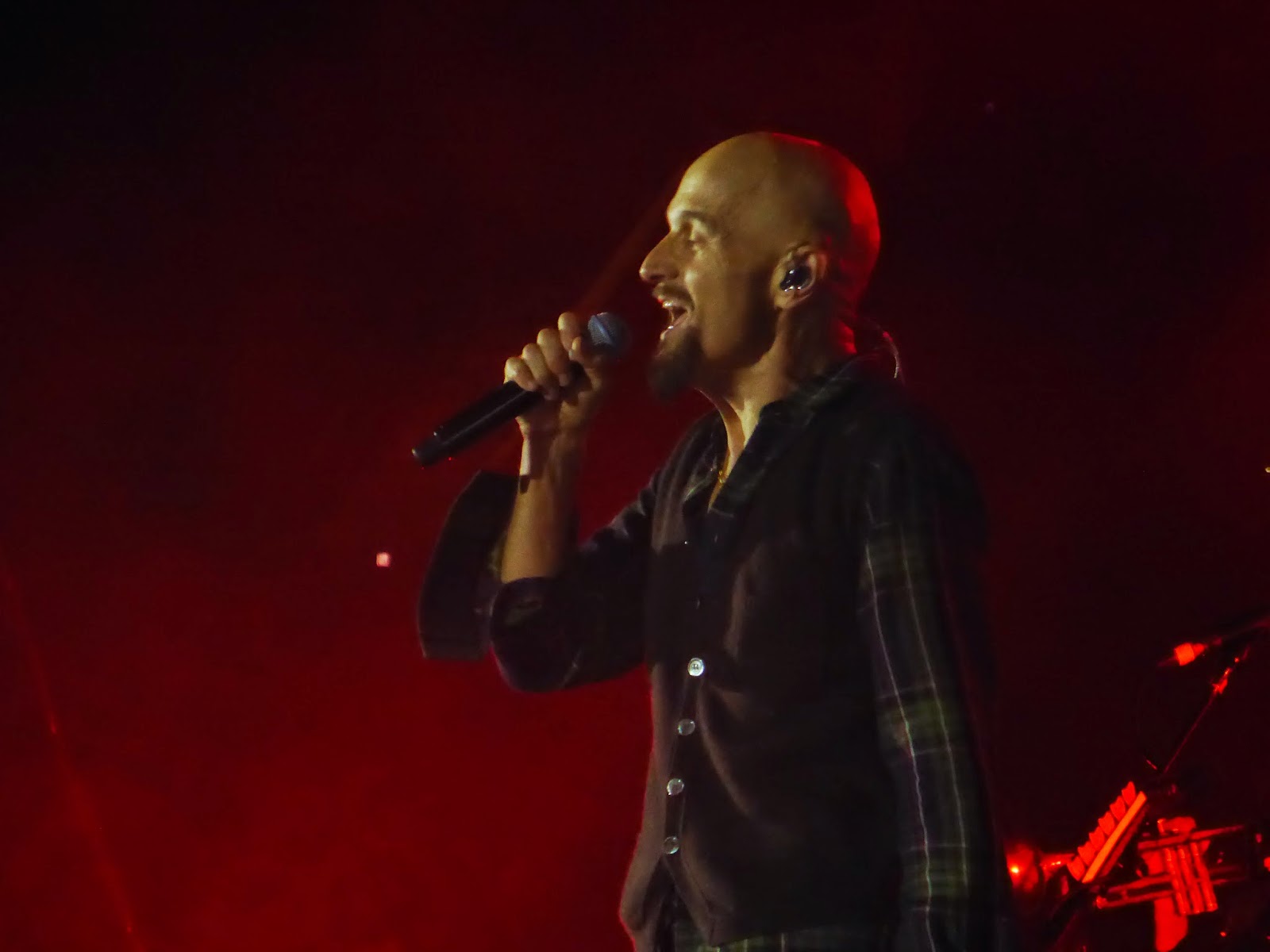 Born Of Frustration sees them all stay on stage tonight and allows us to focus on the sheer power of the song without being distracted by people in different corners of the arena.  It’s a song that drifts in and out of the setlist, but really was the calling card for the Seven album, especially when the crowd can participate in the hollering Indian call of the intro of the song.

They finish with Sometimes which almost descends into farce, they play the song with an interesting opening where Tim sings the first line without the band having started the song, the audience stops, are called back into action by Tim stomping his feet, prompting a sing-along section, but before the band can come back in the crowd stop singing and it doesn’t get carried into the mass celebratory communion it’s been on other nights.  It’s one of the great things about having Sometimes at the end of the set, although the structure of it might be well-known to people, it’s never the same because of the crowd and how they take it.

All in all, a gig very much geared to the audience and the night of the week, but still enough in there that goes beyond what the casual fan of the band might know and expect from them.   With concerns about the venue and Tim’s voice, which sounded in fine fettle despite issues with his throat over the past few days, it was the right set for the evening and the place, but hopefully we'll see some changes this week.

James played Lose Control, Seven, Walk Like You, All Good Boys, Sound, Curse Curse, Laid, Hymn From A Village, All I’m Saying (intro), Quicken The Dead, Out To Get You, Getting Away With It (All Messed Up), Greenpeace, Stutter, Just Like Fred Astaire, Moving On, Gone Baby Gone, Come Home, Tomorrow, Born Of Frustration and Sometimes.