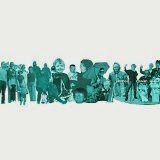 Written over a 3 week period in a former industrial Mancunian heartland, Finnish Line is the fourth full length album from  Mancunian singer, songwriter and multi-instrumentalist Alan Roberts aka Jim Noir.

In keeping with his earlier releases, Finnish Line is awash with Beatles-esque melodies and George Martin production values. Opener The Ancoats Dream couples the sound of the Fab Four and an historical tale of the area of northern Manchester where Noir wrote the album. Noir clearly isn't afraid to show his influences and next track Strange Range sounds like a long lost Teenage Fan Club single - big fuzzy guitars and east coast vocal harmonies. Broadway Jets is a mellower number with acoustic guitars replacing the electric but maintaining the vibe and attitude of the preceding track. Make Me Do It Again has some beautiful George Harrison style guitar parts and a Mellotron used to great effect.

Honour and Moodswings has a big and bold anthemic introduction which sounds magnificent in stereo. It is a long time since the production on a record has impressed me so much. Piece of Mind is a stripped back piece reminiscent of a McCartney Revolver composition. Stone Cold Room on the other hand, is like 70's Lennon.

There is a lot to like on this album but I can't help think it should have been released four months ago as it is a perfect summer pop record, with touches of The Animals, The Kinks and Big Star. Other High Flying Mancs may have borrowed or stolen from The Beatles. Noir doesn't. He has created his own music whilst doffing his cap to Lennon, McCartney and Harrison.  A record this ambitious deserves to reach a wide audience.

The Finnish Line is out now and can be ordered via Jim's website on vinyl, cd and download as well as an album bundle containing all three.  He is also on Facebook and Twitter.