I Am Kloot - From There To Here 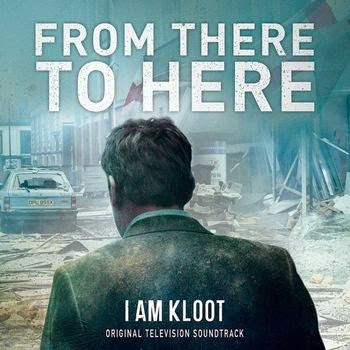 From There To Here is the soundtrack to the BBC TV drama of the same name, set in the aftermath of the 1996 Manchester bomb.  It features sixteen instrumental pieces as well as three complete songs from I Am Kloot’s back catalogue.

This is, by nature of what it is, not a typical I Am Kloot album.  Whilst the band’s traditional songwriting process is for front man John Bramwell to craft songs on his own on an acoustic guitar and bring them to the band who then elaborate on them.  This time, each band member has contributed instrumental pieces to the record, some of them which have the feel of nascent I Am Kloot songs and some which fulfill their stated purpose as incidental music to scenes in the drama series.

We’ll start with the three full songs.  The Same Deep Water From Me, the final track from their eponymous second album, is full of widescreen emotional wistfulness, reflecting on the protagonist and subject of the song being in the same dark situation – it fits the theme of the program, dealing with the impact and struggles caused by the bomb perfectly.  Even The Stars, written in memory of John’s close friend Bryan Glancy, is further proof of how his lyrics are so wide-reaching in their ability to be translated into someone else’s trials, tribulations and traumas, in this case a fictional character in the show.   Finally, there’s the positivity of Northern Skies perched at the end of this record, reflecting that curious romanticism and optimism that everything will be alright whatever life throws at you.

The title track which opens the album and its reprise which closes it feel like they are an instrumental version of an existing song with the yearning acoustic guitar and haunting melody perfect for scene setting on a devastated city centre scene around which the series is based.  Joanne And Daniel (Part 1) is another traditional acoustic guitar led track with hints of what sounds like a mouth organ to add to the mood impact of the song.

We’re given no clue to who has composed what on the record, but interviews suggest they were developed independently by all three members of the band.  As a result, some of the pieces, composed by the other band members bassist Pete Jobson and drummer Andy Hargreaves sound very different to anything Kloot have done before, particularly the three minute Blue which has some stunning distortion applied to the guitar running throughout it  and the slightly sinister electronic wizardry of The Bomb which builds up to an abrupt finish (which I assume is the bomb going off).

That feeling that this is a different record continues through Euro 96 (a reference to the football tournament being held in Manchester at the time of the bomb) which is a dark foreboding piece brimming with menace and A Dream (Part 1) and Heart Attack, pieces so fragile and sparse in parts that they’re almost not there.

There are plenty of shorter pieces on here, less than a minute such as The Turning that feel like kernels of ideas, seeds of potential future songs or just short jams to match the mood of a specific scene in the drama (Daniel Flashback, Daniel Stressed, IRA Tribute Act, Salford Refrain are clear references in song titles to the series) - reviewing it without recourse to the show makes it difficult to judge individually.

The album’s nearest direct comparator in my collection is James’ Wah Wah.  It lacks the psychobabble and electronic trickery of that record, but it feels like a band thinking out loud and sharing it with us.  Whilst not a record for those that loved Sky At Night and Let It All In, it’s a fascinating insight into the creative minds inside I Am Kloot and potentially a pointer for a future away from the string-laden commercially-atuned glories of those albums.