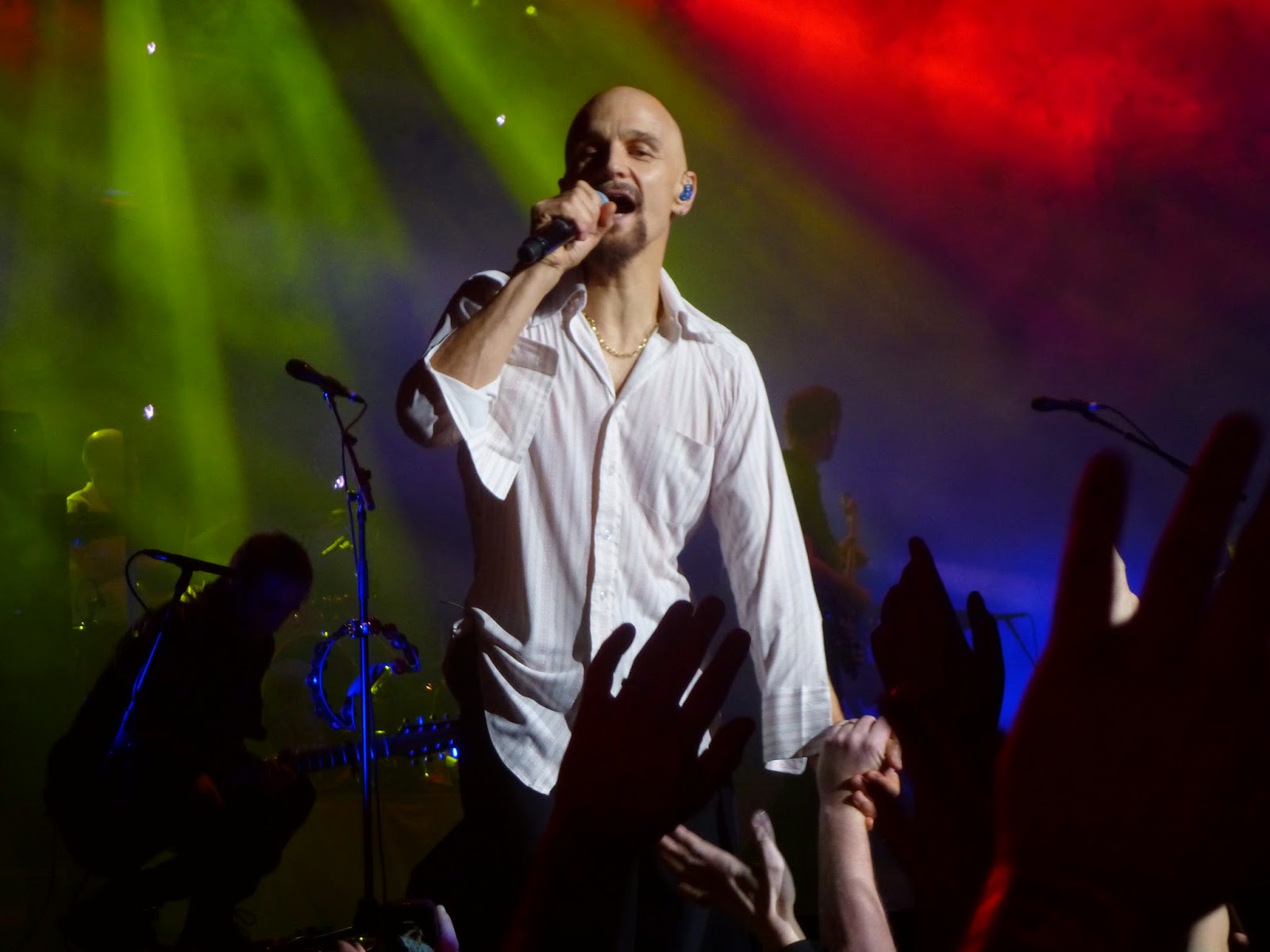 The First Direct Arena claims to be a proper music venue for music lovers.  Tasked with doing that yet holding over 10,000 people is not easy task, but as these big arenas go, it’s the best in the UK with decent sight lines for everyone even those up in the Gods, a standing area that gets everyone close to the stage and a sound set-up that doesn’t hit you with reverb and echo every time the bass drum kicks in.

James come on and Saul tells us it’s the end of tour party but that we’re going to open proceedings with a song we’ve never heard.  Opening with All Good Boys, a b-side that most of the audience won’t know, is a brave move, but sort of what you’d come to expect with them.   Always trying to add to the song, Saul initiates the audience clapping along by using his guitar as an improvised drum. 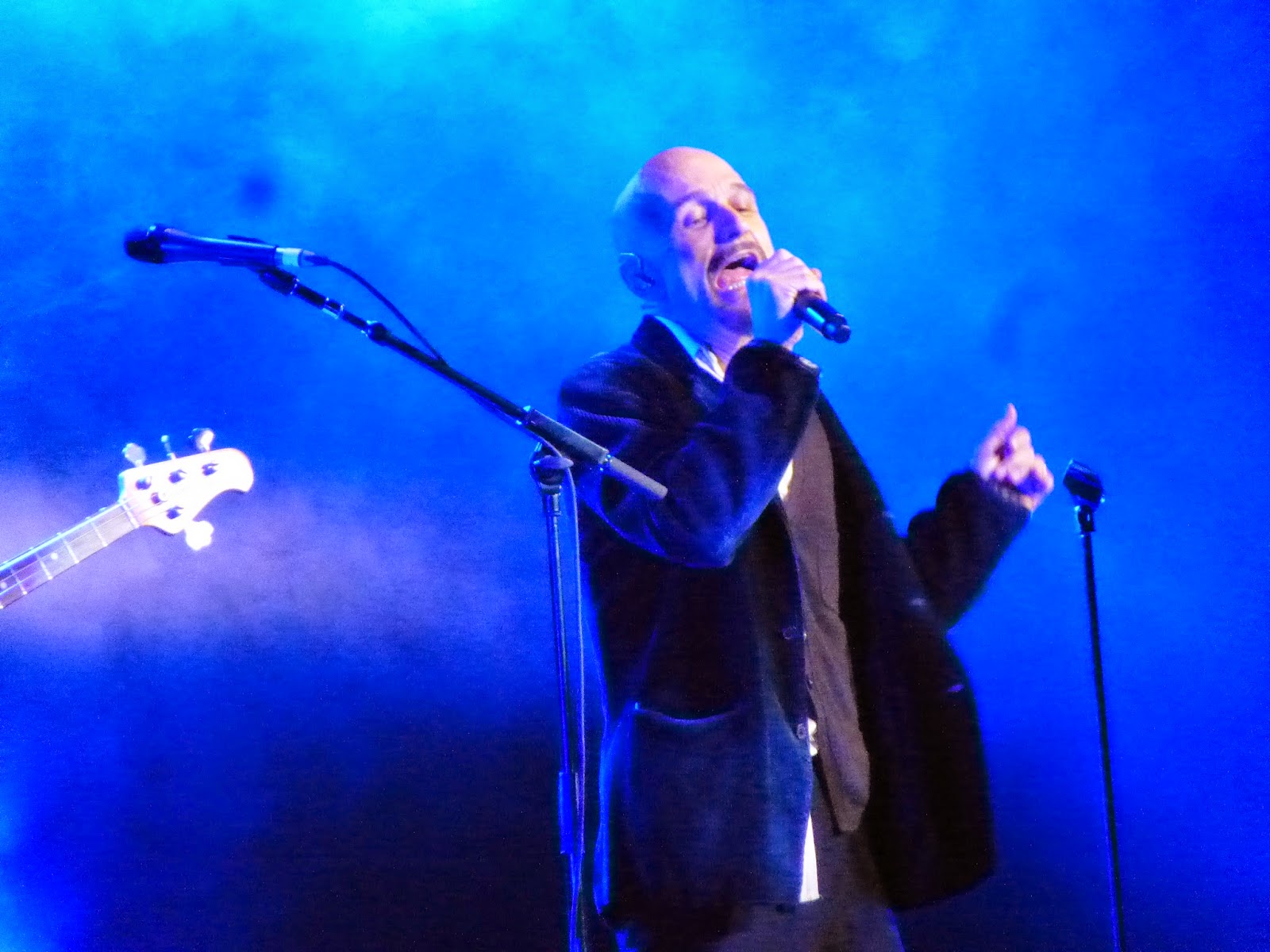 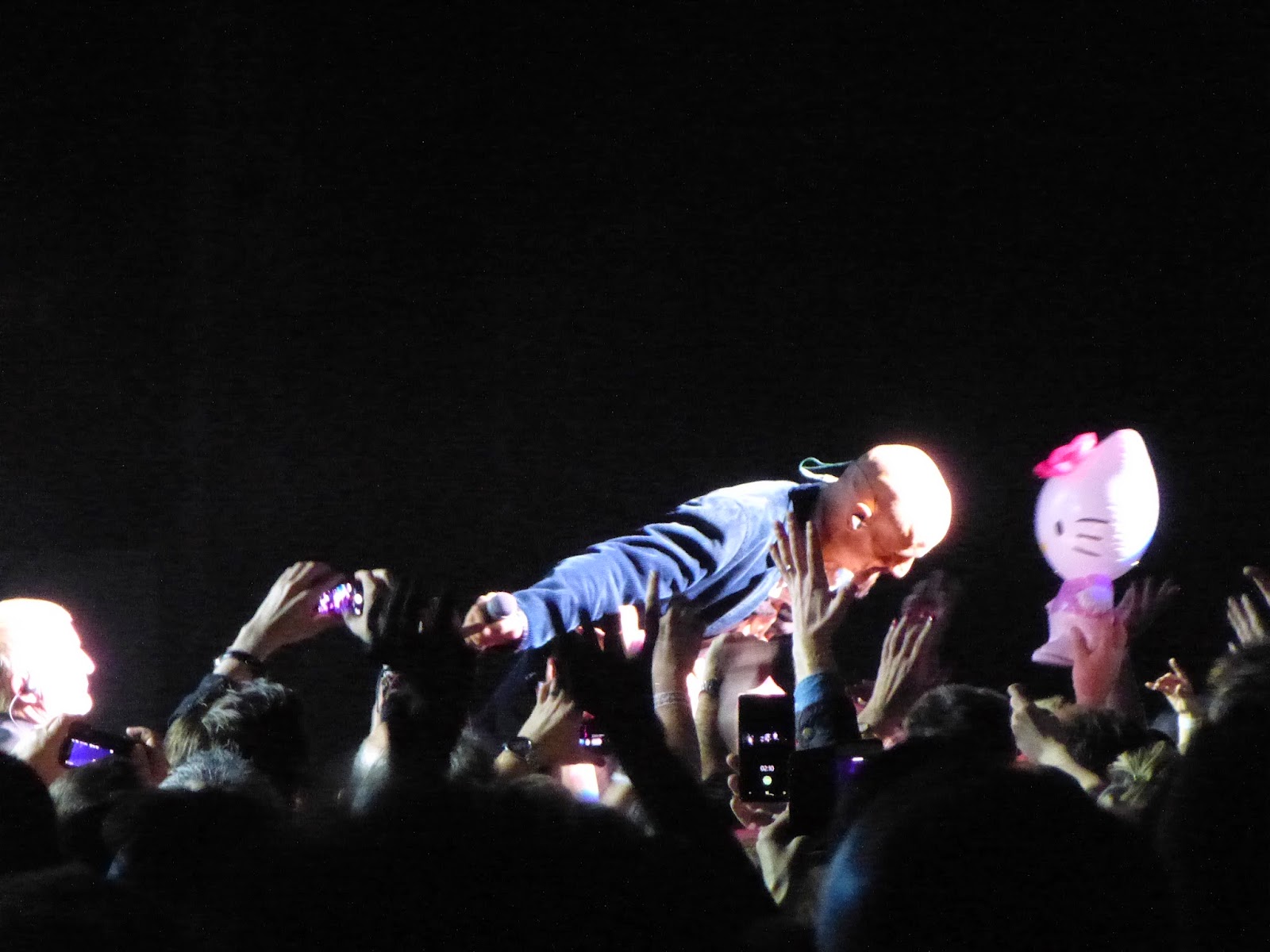 Frozen Britain is described by Tim as waking up your life and falling in love.  After neglecting it earlier in the tour it appears to be back in favour and rightly so, cramming so much about what’s great about James into three and a bit minutes – a big tune that doesn’t take itself too seriously, playful yet meaningful lyrics which by substituting Emily of the chorus for another name can speak to anyone who’s experienced this situation and an outro that has room for improvisation as half of Leeds joins Tim in their best French accent for the “la petite more pour toujours” punchline.

Say Something sees Tim venture down into the crowd for the first time, fighting his way past a Hello Kitty doll pushed in his face to surf round the standing area and, as usual, not missing a word of the song.

Next up is Just Like Fred Astaire, their one full on love song as Tim describes it.  It gets a delirious reaction as it’s a very obvious crowd favourite and soundtrack to a thousand James fan weddings.  It reaches its conclusion with Tim and Saul together singing.

Walk Like You has been pushed backwards into the set, but loses not of its impact.  As the song hits the breakdown section the band go off on improvisational tangents, Tim seeks out Andy who’s providing the soundtrack to his ecstatic dancing.

Tim introduces Curse Curse as a song about being in the Malmaison and hearing the couple next door and wanting to join in.  As with many of the other gigs, it gets as good a reaction as many of the bigger hits around it, Tim emphasizes the “Messi shoots and scores” line with an air kick more at home a mile away at Elland Road as his beloved Leeds plummet towards the bottom of the Championship than the Nou Camp.   He ends up singing stood on his monitor surveying the chaos of the mosh pit. 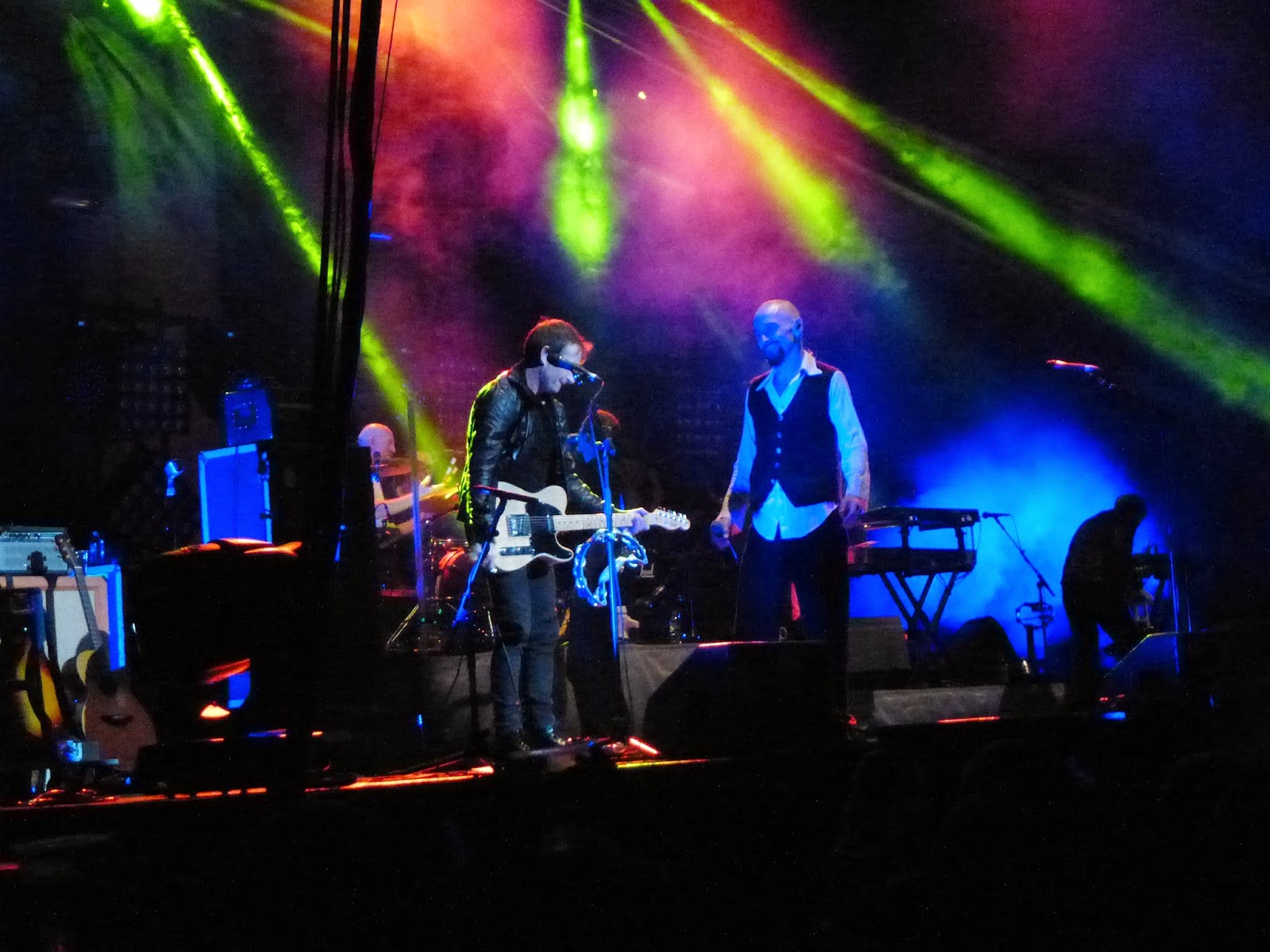 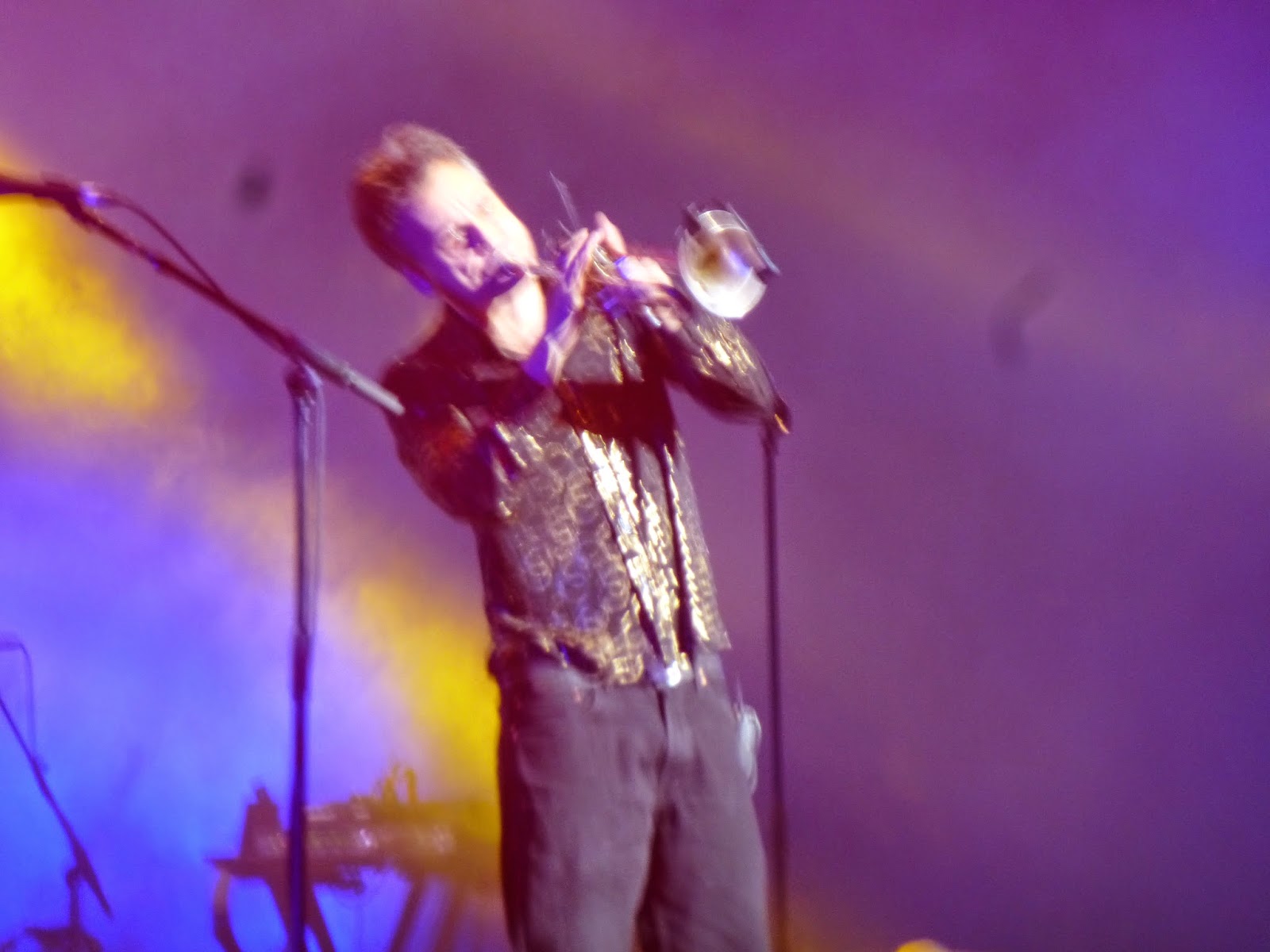 As has been the case at all the other shows, Curse morphs into Laid, the crowd almost drown out the band as they sing the first verse before Tim can start so he lets them have their head with a wry grin on his face.   If anything the song has got more crazy in its twenty first year on the planet, an excuse for every one to let go and lose themselves to that drum pattern and the slightly bonkers lyrics.

Having got the crowd warmed up to the point of explosion, they take them back down with a beautiful Lullaby.  Tim explains they met a guy in Newcastle who had the whole of the lyrics tattooed on his arm.  It’s a beautifully poignant song and most of the crowd gets this and respects it, as they do All I’m Saying, which is more personal to Tim in the context he sings it, but with enough for it to be able to be related to situations that everyone in the room has faced at some point in their lives.

There’s a tease that things are going to go back to the known and loved hits with a frenetic wild Born Of Frustration, which sees Tim returning to the audience, thanking them at the end for the lack of gynaecological experiments on him, and Andy’s trumpet call and Larry’s piercing guitar solo as well as some crazy lighting effects.

If Lullaby was a brave move, what happens next borders on the heroic. Most, if not all bands, get to the last night of a tour and, whilst they’re ready to party, wouldn’t go and cut up the structure of their set and rebalance it.  They certainly wouldn’t just pull a song out of their back catalogue that they’ve never played before and pitch it mid-set, yet this isn’t any ordinary band.  Go To The Bank was released on Whiplash in 1997 and never made it into a setlist (see footnote), yet they've plucked it out of mid-album obscurity and perform it as if giving an intimate rehearsal to 10,000 people.  It lacks the pristine polish of the rest of the set, but that alone makes it brilliant.  You listen to dull formulaic rabble rousers like Kasabian bleat on about how radical their sound is whilst churning out variants on the same monotonous stupidly-named songs then see James play that - this is what taking risks is, doing something different and if there's another band around doing it, then I haven't seen them. 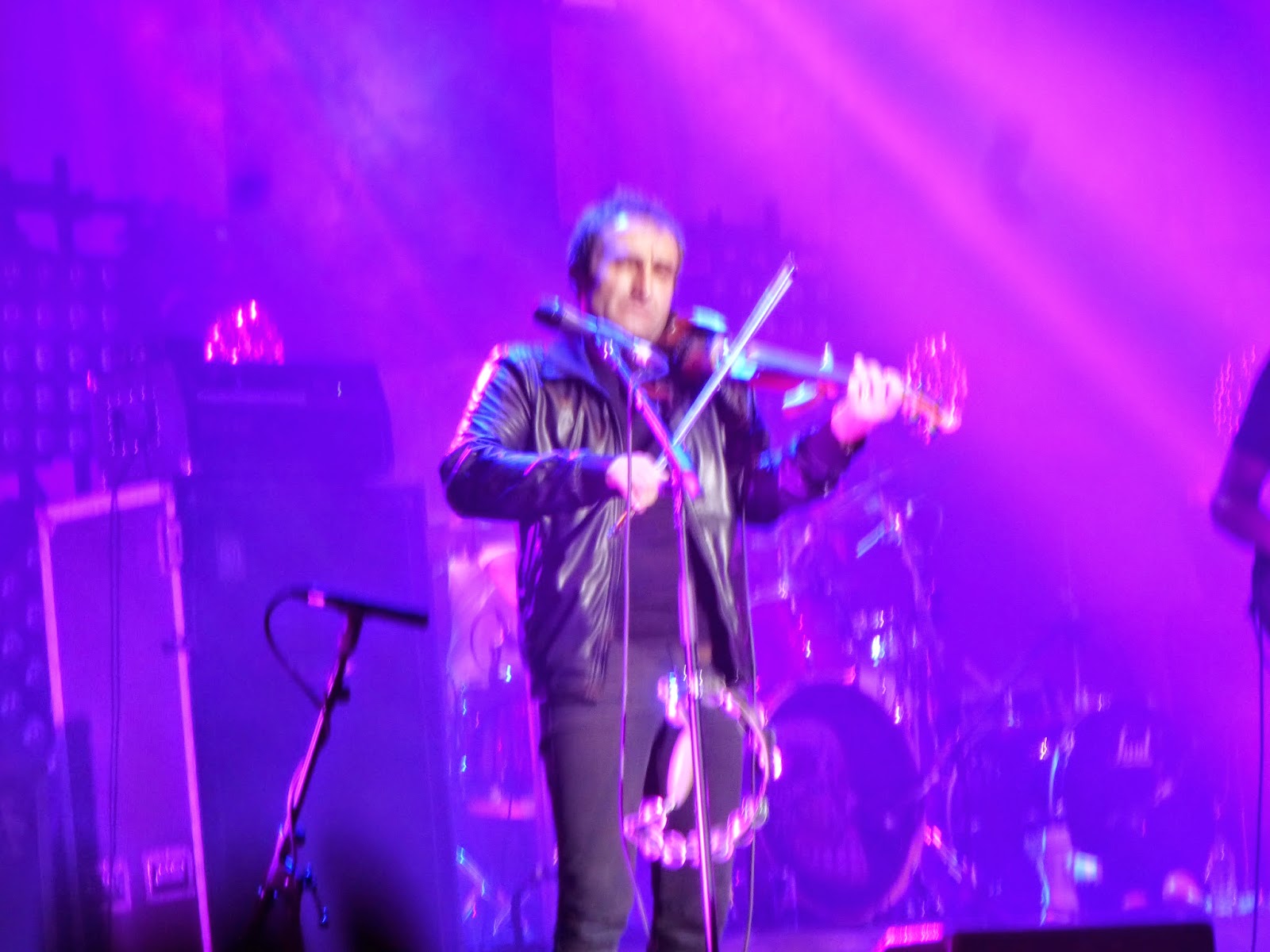 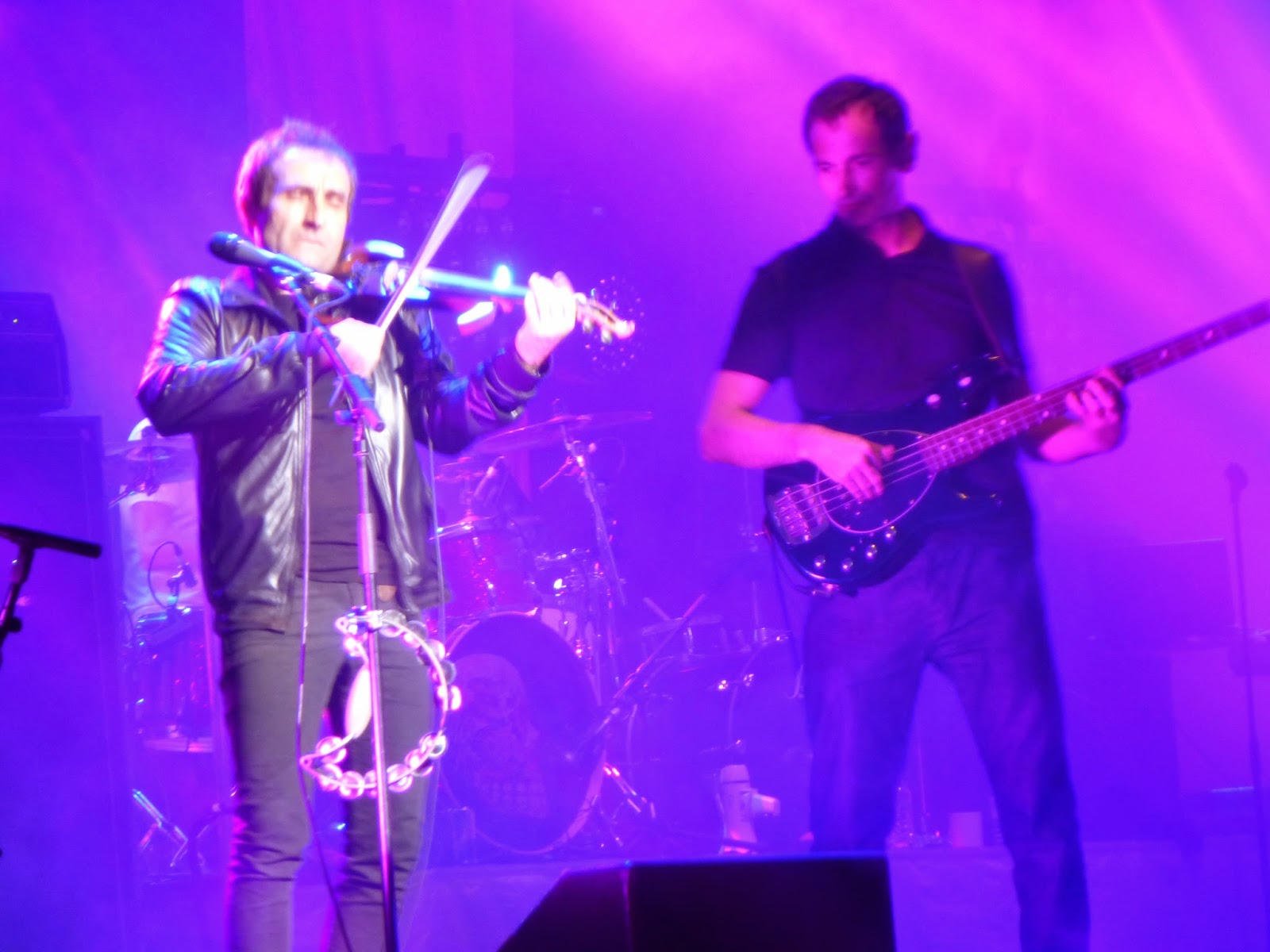 Not content with that, they then crank up the bass to a point where you can feel it rising and punching you in the stomach for Jam J.  You can't see the band for the wall of white light and strobes, but as Tim bounces round the stage as the song jerks to its conclusion, Leeds just stands and stares. The contrast with PS is remarkable.  It soothes the ringing ears and the eyes are treated to a stage basked in red light as Saul takes centre stage with a gorgeous show-stopping violin solo.  Saul jokes beforehand that they missed it out of the set last night because someone had forgotten to write it on the set lists.

The crowd have generally taken in this diversion from the well-known tried and tested hits in their stride, listening appreciatively (and quietly when needed).  But to finish off the main set, it's back to the songs that people know and which get them dancing and singing along.  Getting Away With It never fails to get a crowd going, whilst the reaction Moving On, tonight with an extended intro section, gets is no less forceful - a running theme with all the new material tonight and on the rest of the tour.  These songs speak to people in the way the James songs of old used to - it's just such a pity you have to go looking for them these days due to the lack of media and (with a few exceptions) radio support otherwise these songs would get the acclaim they so rightly deserve.

We then get to the real triumph of the tour.  Tim invites a dozen dancers on stage for Gone Baby Gone with instructions to dance, nearly swiping the camera phone out of one man's hand when he tries to film from the stage.  Gentlemen bounce around the stage excitedly, girls dance properly as the song's staccato jagged guitars whip the arena floor into a frenzy probably only matched by Laid at this point.  Tim gets through the love love love blah blah blah section and collapses exhaustedly to his knees at the front of the stage.

They finish with Come Home, a song of communal self-flagelation, the doubt and worries of the lyrics washed away by an invitation to lose yourself in the music created so loose that you can't help but dance to it. 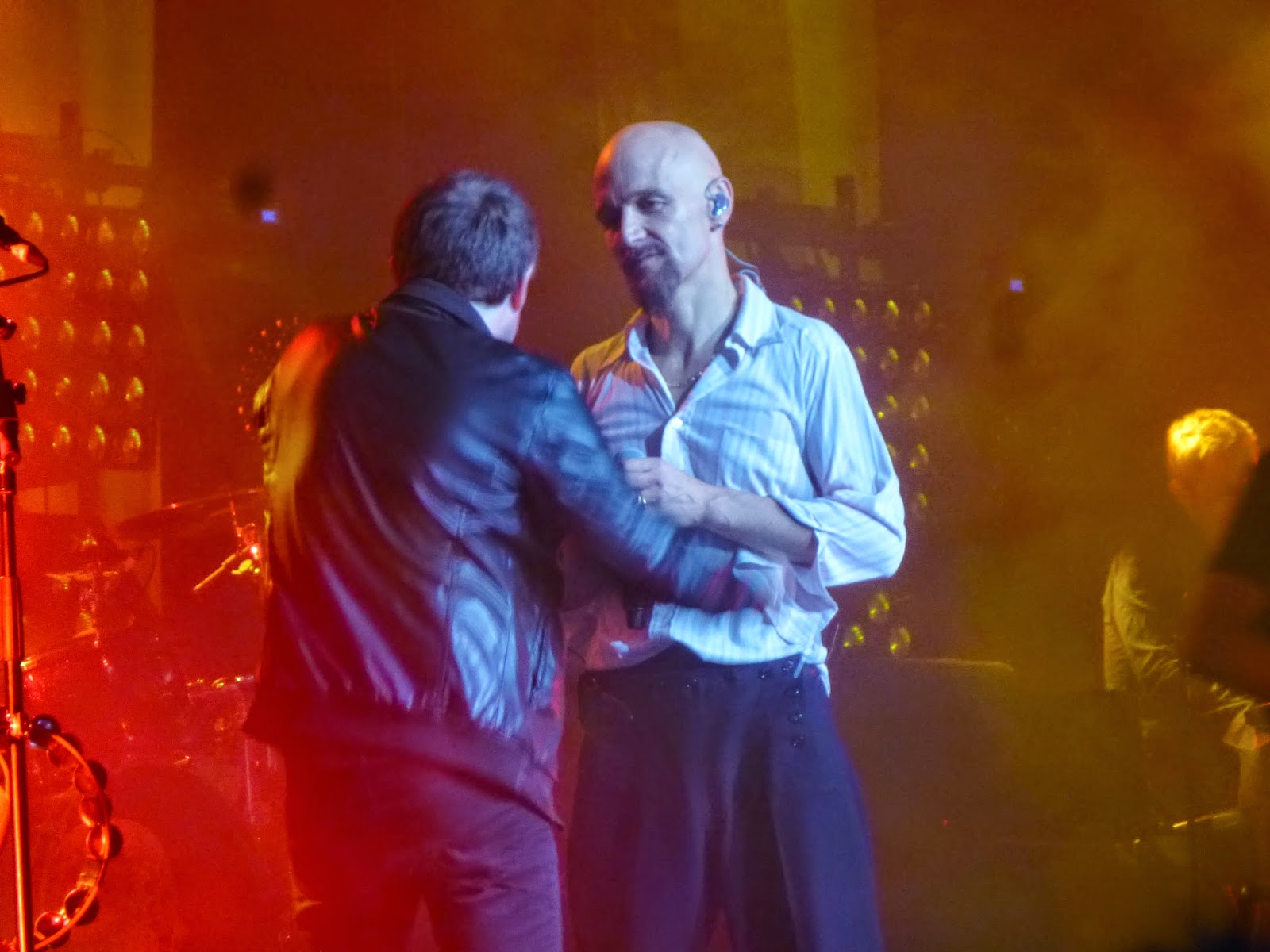 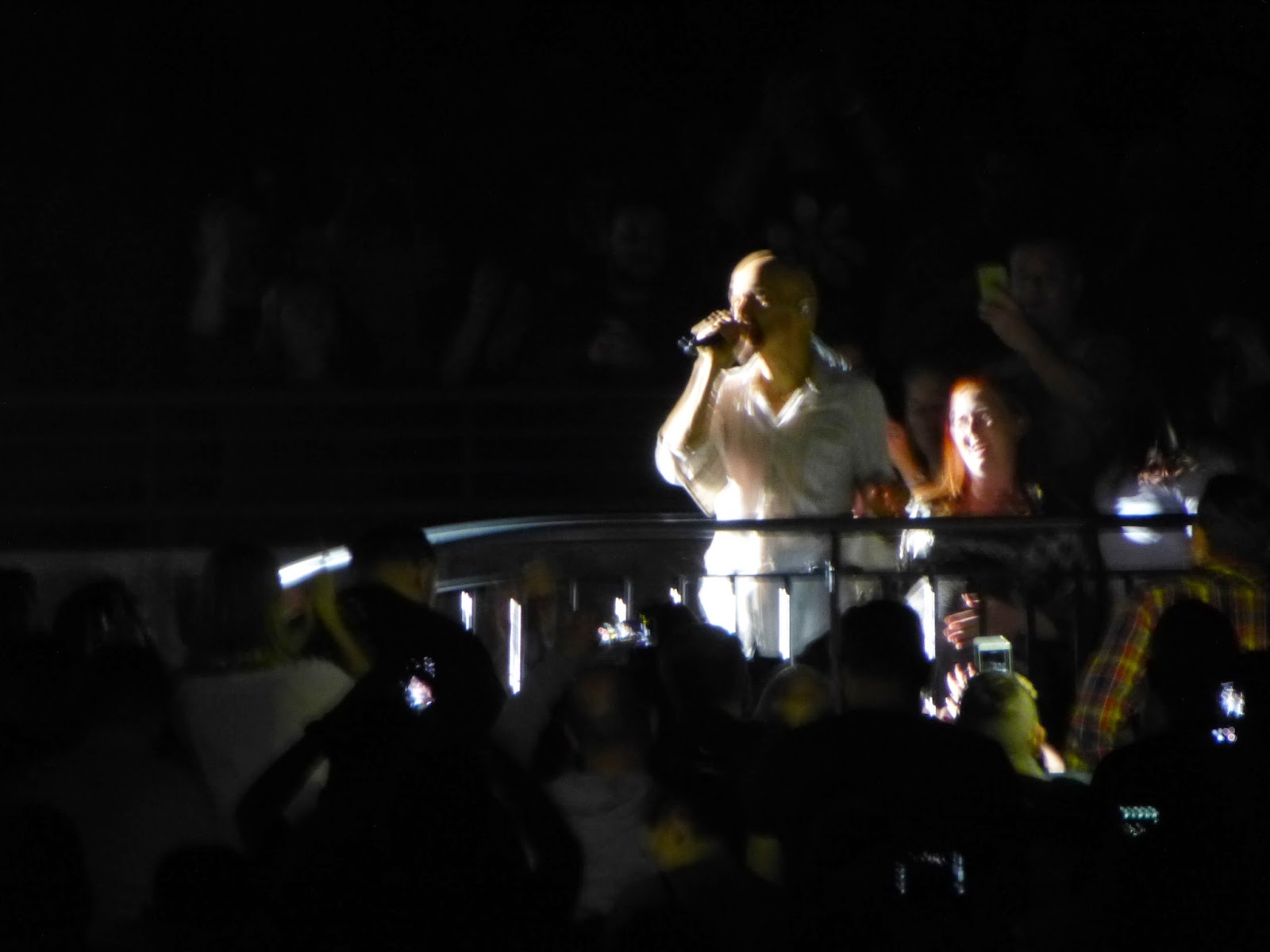 For the encore, they come back on for Out To Get You and as the song draws to its elongated instrumental conclusion around Saul's violin and Jim's bass, Tim disappears, only to appear up in the Gods of the arena as the opening bars of Sound chime out.  They've never done this before with Tim in the crowd, but it's no less effective.  Tim makes his way round the circle of the seats, pausing to sing in the wheelchair area.

Interrogation is another song that has grown live on this tour so that it doesn't feel at all out of place given its status in the eyes of some fans as a mere album track.  It's as epic and bold as anything else in the set, the breakdown as Tim delivers his judgement on himself to the sound of Larry's guitar solo pierces through the red-hot atmosphere that the fans have generated.

It's down to Sometimes to conclude it and aware of the impending curfew and the draconian punishments imposed to stop people having fun, the band take the song down and let the audience sing it back to them which they do way after the band have departed the stage.  Ironically it gives a new twist to the song that's taken so many on this tour, stubbornly refusing to allow itself to be moved from the end of the set by refusing to become predictable - the mood of the band and the crowd taking it down different roads each night.

So that's the end of the UK tour - ten nights that have seen the band take La Petite Mort out on the road.  Unlike some previous tours, the album has remained firmly in the setlist with between five and seven songs being played from it each night accompanying a mix of some (but not all) of their hit singles as well as songs they've rediscovered, reinvented or simply rested for a few tours and they've pretty much got the balance spot on.  The most heartening thing has been the audience reactions to La Petite Mort, they haven't felt out of place, they've not seen a mass exodus to the bar and they've been sung back, danced to and loved just as much as the old favourites.

James played All Good Boys, Frozen Britain, Say Something, Just Like Fred Astaire, Walk Like You, Curse Curse, Laid, Lullaby, All I’m Saying, Born Of Frustration, Go To The Bank, Jam J, PS, Getting Away With It (All Messed Up), Moving On, Gone Baby Gone, Come Home, Out To Get You, Sound, Interrogation and Sometimes.