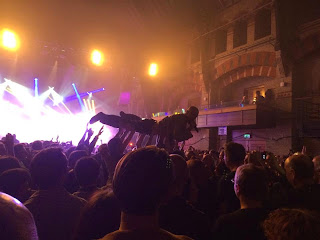 Cambridge Corn Exchange is the setting for the first sold-out night of James' La Petite Mort tour. Armed with a full sound and lighting set up, a new album that stands up to anything they've done before, they once again demonstrated why they're the most formidable live act in the land.

After a well-received opening set by Starsailor, James came on fashionably late to Tim declaring "let's have some fun" to the sold-out Corn Exchange.  In typical James fashion, there are seven changes to the set from the night before, impressive considering there's six songs from the new album in common with the previous night and the order is mixed up too as they strive to find the right balance and perfect set pace so they can tear it up again.

First up is Oh My Heart, a welcome return of the Hey Ma album to the set for the first time in this series of dates, Tim, as is his wont, twists the lyrics round, evolving the song as he does so, even more impressive given his in-ear pack gives out half way through the song.  A quick battery change later and they dive into La Petite Mort opener Walk Like You which again descends into an improvised frenzy as it reaches its conclusion, trumpets and violin everywhere.  It's the album's brash, bold strident calling card. 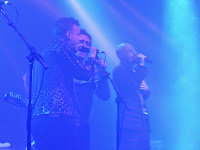 She's A Star makes a return to the set and this time it's given a boost with extra keyboards by Ron Yeadon.  It's a song that survives in the set down to its popularity with the crowd and also their ability to twist it and reinvigorate what is, when you take it back to its genesis, one of their most straight-forward pop songs.  Quicken The Dead was a song that I hadn't been completely convinced about live to now, but in this hall with a sound set up capable of highlights the nuances in the melody and the vocals it grows into something exquisitely beautiful.

Seven has grown a new heavy intro to the point most people don't recognise it until Tim's vocals kick in and Andy's trumpet call floats across the hall.  Curse Curse and Laid, two songs which showcase the playful side of Tim's lyrics and which have a propensity to get people dancing, are cleverly put together, firstly because of the reaction they get and second it creates a comparison between the two, which Tim alludes (and I'm paraphrasing here) to later when he talks about Sit Down having got to number 98 (77) the first time round even though they knew it was a hit, but the walls of radio and press were up and weren't letting James in and that they know these new songs like Curse Curse are hits in the same way Laid was, but those walls have gone back up. 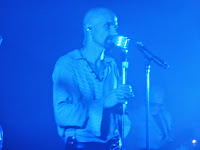 PS is simply beautiful, the band lit in a fiery shade of red as Saul takes the limelight perched on his riser towards the back with a jaw-dropping violin solo that even has his bandmates turning round and watching awe-struck.  The audience is incredibly respectful, almost listening in silence, apart from a few mouthing the words at the opening to All I'm Saying after Tim explains its significance, breaking into clapping as the song builds.  What appeared originally as an unusual single choice actually makes perfect sense as it's one of those songs that builds in intensity before dropping down to its punchline.

Say Something sort of sits at the centre of the set between the two introspective songs that precede it and the journey into the darker less familiar roads of James' canon.  It's one of the songs that can sometimes become a little predictable, but Larry's guitar work in the breakdown gives it a new interesting angle.

All Good Boys has become quite a revelation.  Where it was slightly scrappy at Saturday's warm-up, they've completely nailed it with Saul's opening acoustic and the vocal interplay between him and Tim early in the song and the communal coming together of five voices at the end. Greenpeace sees no technical issues tonight and therefore the contrast between the indifferent onlooker and the evil industrialist of Tim's two microphone set up and the subdued instrumentation of the verse and the chaotic maelstrom when the guitars and everything else kick in against a backdrop of strobes and other lighting effects is something uniquely James.

And then there's Stutter.  One of the band's oldest songs, written after listening to too much Nick Cave and Birthday Party at an early age and Tim's suggestion for a goth wedding, is just simply staggering.  To call it a song is actually doing it a dis-service, it's an assault on the aural senses.  Every time they play it they do something different with it and it's not surprising they've never committed it to record as how could you ever come up with a definitive version of something so feral and uncompromising.

Into the home straight and Just Like Fred Astaire confirms that James aren't just all about improvised noise and that they can show their softer side and contain their improvisational instincts.  It's a song that needs to be played relatively straight (or acoustic) and from the ascending keyboard intro to the multi-voice refrain about waters rising that's what they do.  With different subject matter, Moving On is similar in that respect.  It's reassuring to turn around and see so many people singing along and dancing and that La Petite Mort shows no sign of diminishing that ability to connect with an audience that James have perfected over the years. 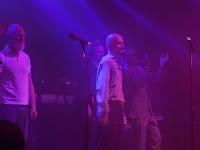 Gone Baby Gone is a revelation.  The one song off the album that hadn't been played live before the tour, you now have to wonder how it's not been chosen as one of the four focus tracks (aka singles) so far.  The rigid polished production of the album version is sanded down and it resembles a loose fragmented jam, always on the edge of breakdown, but which thrives on that threat of dissolution. They finish the main set with Come Home, as spindly and edgy as it's ever been.  Like many of those singing along to every word, connecting with the sentiments of the song, it has every intent of growing old disgracefully, a little all over the place but ever more loveable for it.

The encore opens with Interrogation, the real show-stopper of the new songs, full of self-analysis set to a tune that echoes the menace in Tim's vocals and boasting a breakdown which allows Larry to jam a jagged raw guitar line that draws Tim to him.   Getting Away With It (All Messed Up) is sung so loud that at one point in the first verse Tim lets the audience sing a line.  It's a very symbolic song for James, combining their uncanny ability to write a classic pop song whilst still allowing the seven of them room to breathe and take over as they see fit and a lyric that could be the band's epitaph.

Lastly we get Sometimes. It feels like the band have been trying to extricate this from the end of the set recently, but that's virtually impossible when it gets this reaction.  Tim comes to the barrier and sensing that he's not going to get ripped apart crowd-surfs to the back of the hall on a sea of raised hands whilst managing not to miss a note.  By the time he's made it back, the crowd have taken the song on, accompanied only by a whispered bass drum kick and Tim loses himself in dance as the band gradually come back in to what's almost a free-form jam around the song's basic structure.

Worth noting is also that the light show is nothing short of spectacular and gets combined on some songs with video graphics on the white sections of the backdrop.  As Stutter rampages to its savage conclusion with four sets of drums and Tim on keyboards, the building is lit in white, yellow and purple flashes.  At other times, circular lights are used to imperious effect, flashing, rotating in red and blue light and huge banks of bulbs bathe the band in colourful shades.  James have always been a band renowned for stunning lighting, often improvised as the music, and even by those standards this was something special.

James played Oh My Heart, Walk Like You, She’s A Star, Quicken The Dead, Seven, Curse Curse, Laid, PS, All I’m Saying, Say Something, All Good Boys, Greenpeace, Stutter, Just Like Fred Astaire, Moving On, Gone Baby Gone, Come Home, Interrogation, Getting Away With It (All Messed Up) and Sometimes.