To celebrate the life and legacy of John Peel ten years after his passing, Dub Sex played Sound Control in Manchester as part of a series of nationwide events. Long-term fan Richard Wills kindly volunteered to review the show for us.

Let me first start this review with a frank admission – I am far from objective, if indeed there can be such a thing, about this band. They are, and have been for over 25 years , my favourite live outfit to have graced the stages of our beloved Manchester. To my mind the more acclaimed bands of that most feted of Manchester music eras, “Madchester” as we now know it, were not a patch on the intensity and visceral beauty of Dub Sex at their live best.

Their sound has often been compared to the place of their inception, the crescents and concrete of 1980s Hulme. The tight wall of sound anchored by the bass of Cathy Brooks certainly lends itself to this analogy. However the emotional depth which the swirling melodies and heartfelt lyrics evoke cannot be simply explained by such a simple equation of time and place, it is a sound that lives beyond its context. 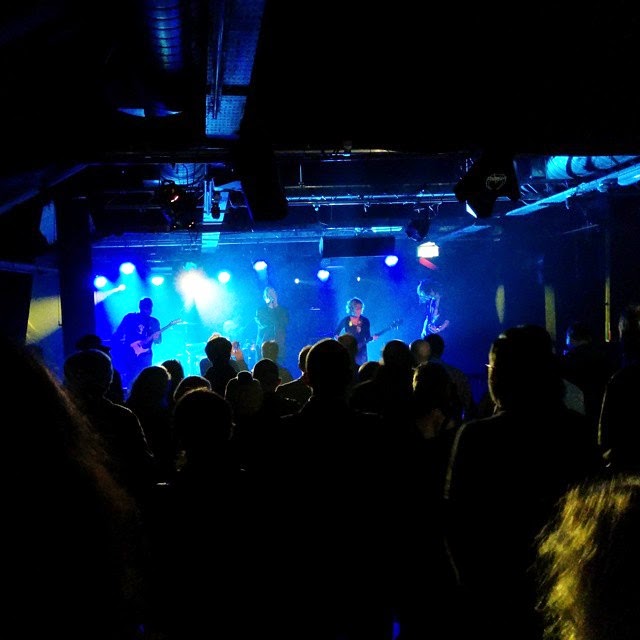 This gig was the third time that I have seen them since their “comeback” a year ago. To be honest the first of those appearances, a charity benefit gig at Ruby Lounge, Manchester didn't quite set my pulse racing. It was a good performance, laden as it was with memories and obvious heightened emotion for the band themselves and the assembled audience. However much a relief it was to see them again the natural power of past performances wasn’t quite there. The next outing at Sound Control was a vast improvement, far more fluid and the intensity of their delivery  was evident again.

And so to the present. This gig was 10 years to the day since the untimely death of John Peel  and as such was dedicated to his memory, a fitting tribute from a band that did 4 sessions for the great man’s much missed Radio 1 show. Once again the setting was Sound Control, a great venue in a city which now has an abundance of such quality music spaces.

First let me say the sound mix on the night was excellent, take a bow the man at the control desk, Dave “Rat”. What struck me most about the performance was not just the progress since the recent outings but the development of the Dub Sex sound in its essence. The amphetamine edginess of old is now being surpassed by a more mature dubbed out sound  overladen with a feel of the Dub reggae so loved by the band themselves, hence their name. What was also evident was the sense of urgency, a hunger to get out there again and not just to re-tread the past.  The most pleasing aspect of this was, as well as the reworking of older songs, the new material on show. The new song “Breathe in Deep” was the highlight of the set for me, a swirling almost epic piece of dub/rock fusion. The older favourites such as “Tripwire”, “Instead of Flowers” and “Caved In” were all given new life, and the night was capped off by a wigged out dub version of the classic “Swerve”.

The bands personnel have always been an intriguing contrast visually. The idiosyncratic jerking movement of frontman Mark Hoyle was much in evidence and his vocals seem stronger than ever. His long term musical partner Cathy Brooks is a more understated presence visually but her Bass work is the bedrock from which the rest of the sound flows.  Chris Bridget’s swooning guitar sounds provide a powerful depth to the mix, the guitar in question often been held aloft to gain greater distorted effects. The newer ingredients in the mix have added to the energy of the unit, Kev Clarke is a powerhouse of a drummer and the rhythm  guitar of Stefan Hoyle gives the overall sound added feel and texture.

My only reservation about this gig was the numbers in the audience which seemed a little depleted compared to recent gigs, playing on the same night in Manchester as Johnny Marr probably didn't help. This mirrors the more generalised frustration of Dub Sex deserving a wider recognition and audience for their music. There’s plenty in the pipeline however, more gigs are planned, new material is being recorded and re-releases of past albums are all on their way, All good!

Well, there you have it. If you think that this is just a diehard fans OTT musings you may have a point. In my defence I advise you to get to one of their gigs, form your own impressions and THEN tell me I’m wrong!