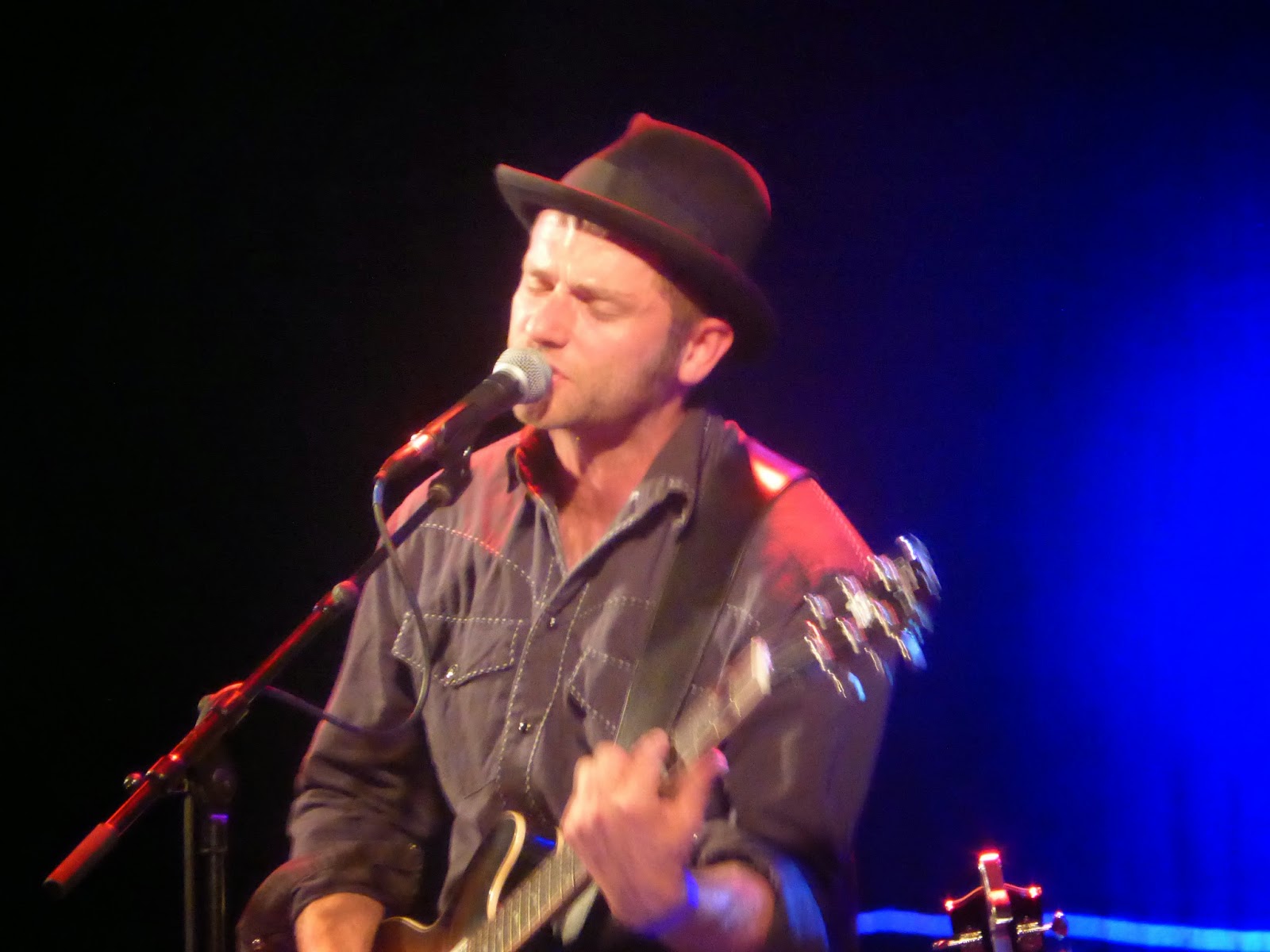 We've been fans of David Ford back from his days in agit-poppers Easyworld and through ten years and four albums of his solo career.  He's back with a seven-track release called The Arrangement, recorded with a string section and he's about to tour the record.  We caught up with him for a chat.

Hello David, thanks for taking the time for talking to us.  It's been eighteen months since you released your last album Charge and we last spoke.  What have you been up to in that time?

Oh the usual, a few tours of the UK, a couple in America, wrote a few songs. And then a decent chunk of the unusual: going to Paris to be employed as a vocal coach to the biggest French recording artist of all time, writing string arrangements for old northern soul songs, working as a volunteer carpenter at a recording studio, spending a week as a drummer in a friend’s touring band, winning a French grammy, going on a 500 mile bike ride and putting my head inside the Champions League trophy.

The new record The Arrangement features seven tracks.  Do you view it as an album or an EP?

No. It’s a collection of seven songs. I don’t much care how it gets classified. But maybe I should have considered this issue. After all, an album asks to be taken far more seriously than an EP. It was a very different project to any I have previously undertaken and its unorthodox, hard-to-pin-down running time is just another element of that. I approached the making of the record much as I would a full album but it’s a nimble, quirky son-of-a-bitch in that EP way. I don’t know, call it what you will. And you’ll always be wrong.

It features strings quite heavily, something that hasn't happened on your records previously.  What was the thinking behind introducing them on these songs?

It’s a project I’ve been thinking about for a long time. I always loved the sound of strings. I’ve often had string parts on my records but this time I wanted to put that sound right at the heart of the recordings and present a more organic capturing of five musicians playing together in a room. So that’s the base for all the recordings. Any other instrumentation was added sparingly to support the mixture.

Were the songs written with strings in mind or were they existing songs that were arranged for strings?

I always try to write without any instrumentation in mind, just focusing on the words and melody and how they can best serve the purpose of the song. Although having already decided to make a record with a string section, I’m sure it’s no coincidence that the songs I wrote leading up to the sessions weren’t so much from the noisy rock n roll side of my nature.

Are the songs going to be recorded without strings at some point in the future or are they specific to this release?

I have no idea. I would imagine these are the definitive versions of the songs but you never know. Some songs insist upon a life beyond. I’m very bad at making plans and have learned not to. Everything is just thrown together and then given the illusion of purpose.

What was the lyrical inspiration for The Snake on the record? The concept of a woman finding a talking snake on the street is an odd one.

I can’t take any credit for that one. The Snake was written by Oscar Brown Jr. in 1963. I really like the lyric though. It’s a metaphor so ridiculous and strangely biblical. I like a song that builds to what is essentially a punch line.

Is the song O'Sullivans Jukebox with its references to "I could have been the rock of the English back four" auto-biographical or based around someone you know?

It’s neither. O’Sullivan’s was a real pub in Eastbourne that shut down in the late ‘90s. It was my first local. The character in the song is some old drunk looking back at his life and ultimately concluding that there are worse things to be than a happy drunk in a good pub. The characters whose voices narrate my songs are never actually me (with the exception of a few tracks on my last album) so the views expressed and the experiences described are not my own. Writing songs is a chance to vicariously live a wild life through a cast of weirdos, heroes and misfits. And while I have spent most of my Sunday league football career as what might be considered an industrious centre-half, it remains a sad fact that even in an infinite universe, there is not one parallel world or existence in which I am good enough to anchor the defensive line of any national football team.

You're touring at the end of the month and into December with the David Ford Orchestra.  That sounds massively ambitious - what sort of scale will the tour be on?

It’s going to be pretty big by my usual standards. The term “orchestra” may be excessively grandiose though. There will be seven of us on stage and it’s my intention to avoid the use of typical “band” instrumentation. It’s very important to me to keep live performance fresh and find new ways to present my songs in front of an audience because I always want to be excited and a little terrified by the experience of playing music. When everything’s safe and easy and simple and you’ve done it a thousand times before in exactly the same way, I think that’s when the dream is lost and it’s time to become an insurance salesman.

You recently won an award for Song Of The Year in France equivalent to their Grammys.  Can you tell us a little about how that came about?

Legendary French rock God Johnny Hallyday was making a new album and his people were looking for songs for him to sing. A number of unlikely twists of fate led to him recording a French language re-working of my song “I’m Alright Now” and the resulting song being popular enough in France to warrant consideration for the award. The whole process went on almost entirely without my knowledge or participation until one day I was summoned to Paris to attend an awards ceremony and the next day I went home with a small but very heavy statuette. It’s still very weird to me as I feel only very slightly connected to the whole thing. But it was certainly an experience.

Most years you do a charity show called Milk And Cookies, a mix of your own material and covers.  Are there any plans to do this in 2014?

There are not. The orchestra tour has been a pretty big creative and logistical undertaking for me and I felt the winter season was pretty well packed for action on the live front. I will certainly be waving the Milk & Cookies flag in 2015 at some stage.

Oh the usual, a couple of tours of the UK, one in America, writing a few songs. And I imagine a good chunk of the unusual too: table tennis at the Vatican, join a Mexican gang, write a best-selling cookery book, learn the euphonium, demolish a house, arm-wrestle Nigel Farage to an honourable draw. I believe I have made my feelings quite clear on the subject of plans.

The Arrangement is out now on download and can be pre-ordered on CD from his website or will be available on his upcoming UK tour. We reviewed it here.


David Ford’s website can be found here.  He is also on Twitter and Facebook.  He is on tour in November and December with a string section for some special shows at