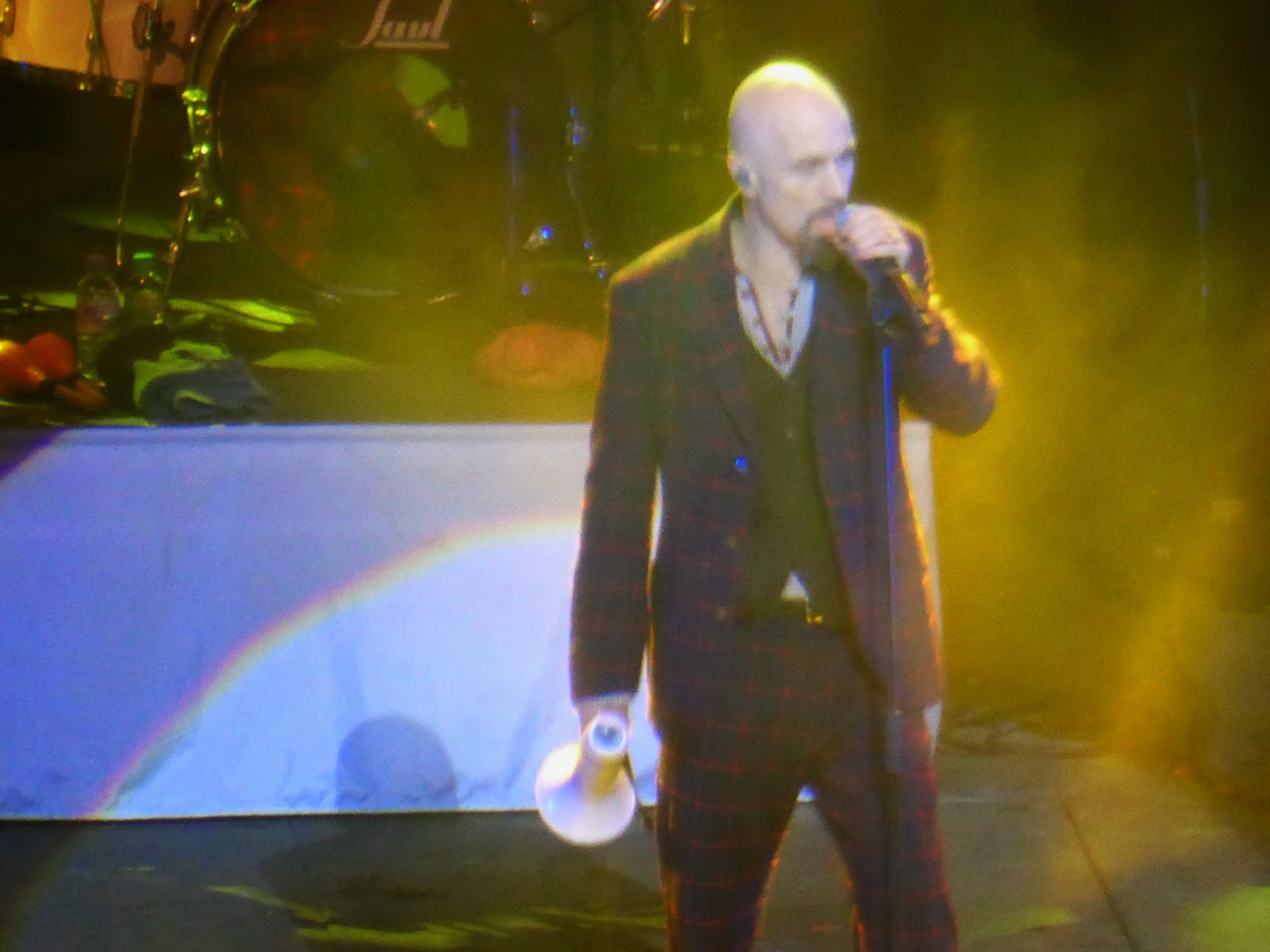 Saturday night in Birmingham and we’re in the soulless pit of the NIA waiting for James to transcend the appalling organization of the place, half-built facilities, stupid rules and the general feeling that this is all a terrible inconvenience to those in charge of ensuring people’s visit to their place of work. Thank God music usually always wins.

Starsailor open the evening and we catch most of their set and to be fair to them they’ve transformed my not particularly warm view of them before the tour into a grudging recognition that they’re not that bad.  They play new songs from their forthcoming fourth album as well as some of their classic singles, so there’s reason there to give them the benefit of the doubt, and songs like Four To The Floor and Good Souls have aged particularly well.   What’s also clear is that, despite the venue being an absolute hellhole, the one thing they’ve actually got right is the sound. 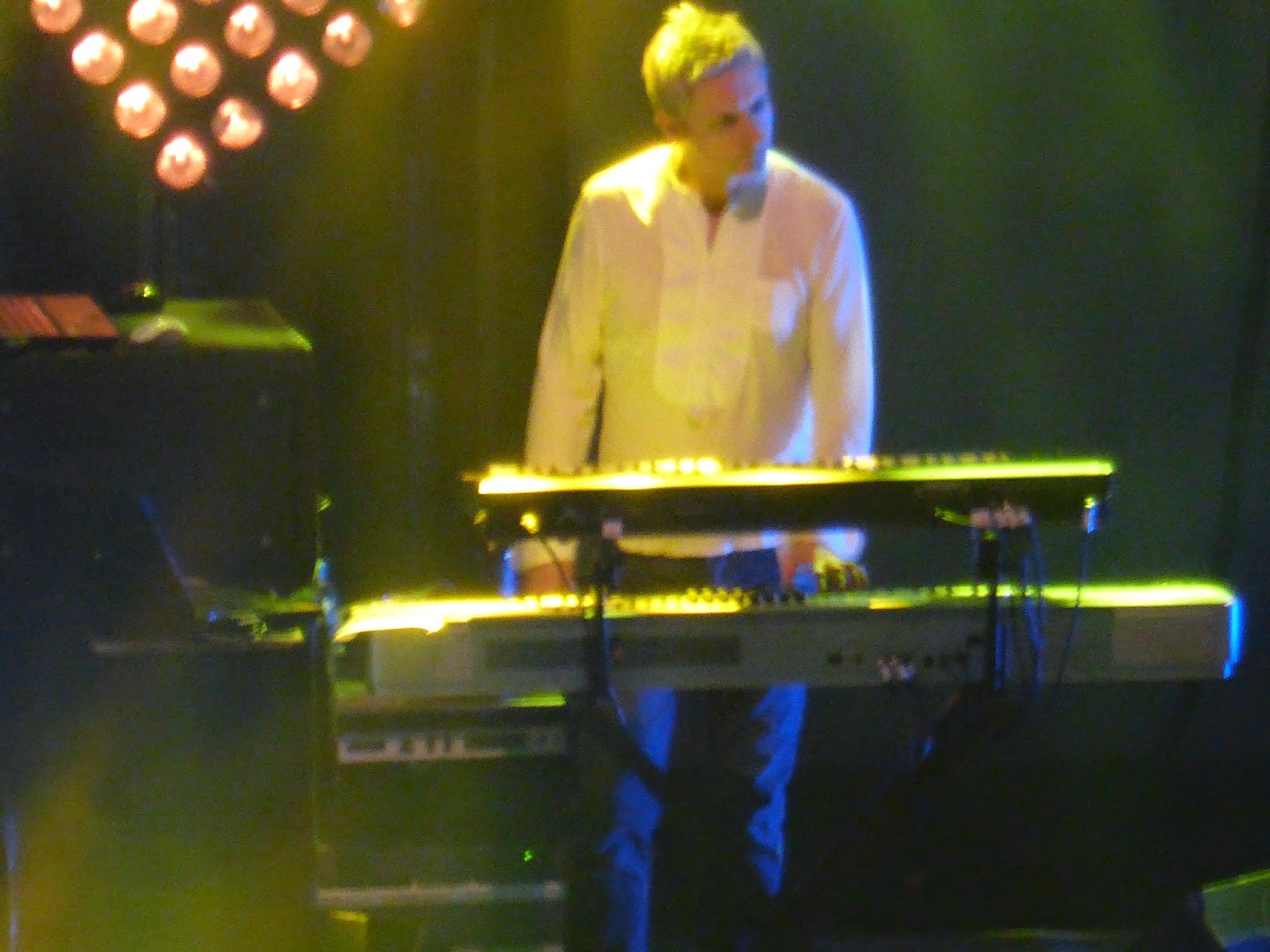 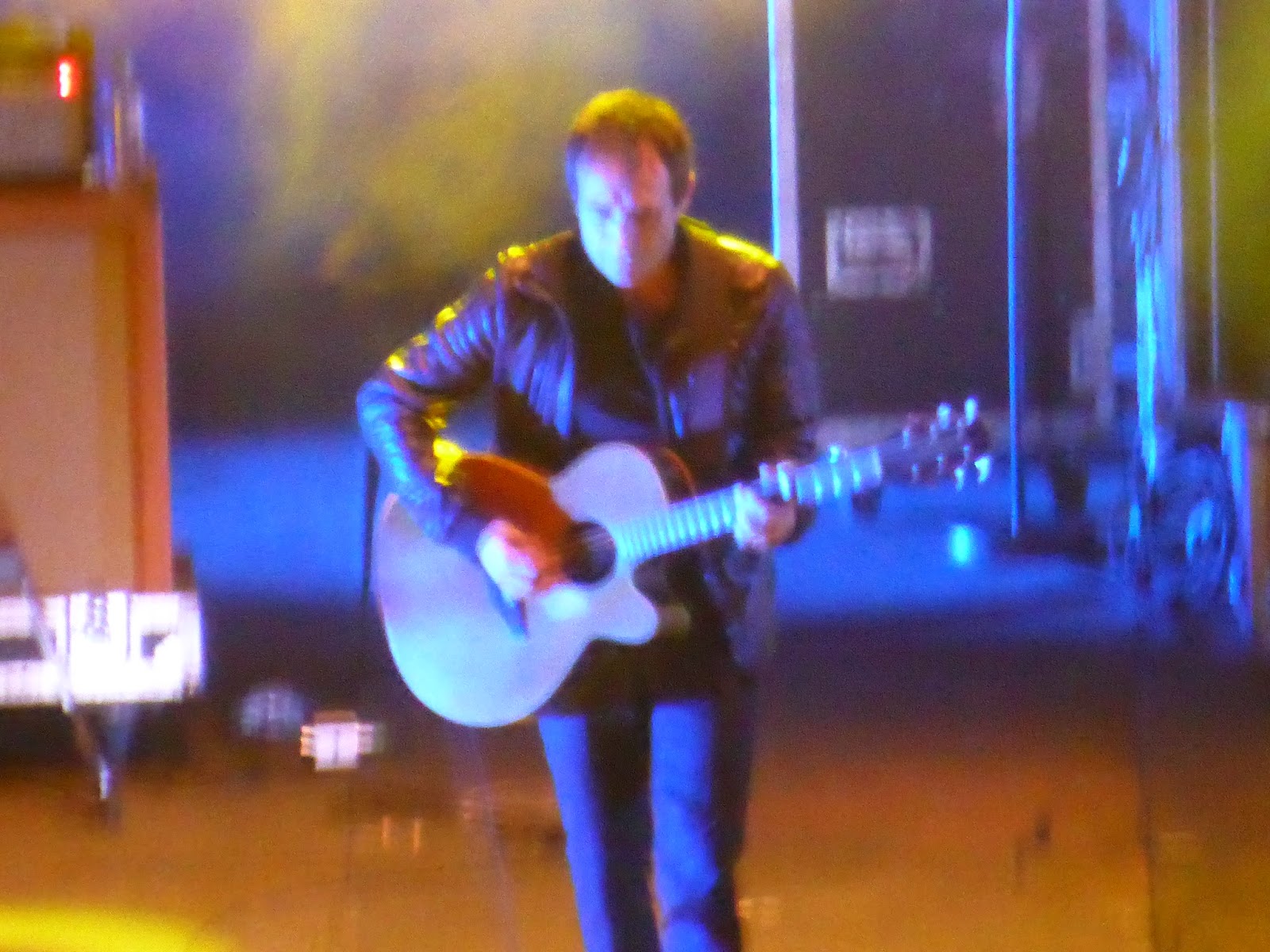 James come on stage, on time for once (well within five minutes) and immediately break into the opening bars of Sound.  It feels a bit odd with it at the start of the set as it restricts the improvisational opportunity a little as a ten minute plus opener might even be a step too far for James.  What's clear tonight is that there seems a real sense of purpose and focus and they're incredibly tight.  Whilst it's that looseness, that getting away with all messed up vibe, that makes every James show unique, tonight is particularly special because it's not as apparent as it usually is. Tim ends up dancing on Dave's drum riser as the rest of the band take over.

Two seven minute songs to start the show is a brave move but Walk Like You has to be an early set calling card, the marker for La Petite Mort, with its bold, striving, euphoric declaration of "let's inspire, let's inflame, create art from our pain" distilling the very James ethic into song.  Frozen Britain has been criminally underplayed on this tour, a playful teasing romp, an obvious single but also with enough in the song for them to play around with it, extending the outro.

Ring The Bells is classic Saturday night James fayre, one of their strongest big anthem songs and one that never feels old or jaded in the way some do occasionally need resting and revitalising (see last year's resurrection of Waltzing Along).  Larry's guitar solo fills the rooms accompanied by blasts of Andy's trumpet and thousands of arms are raised in exaltation as it reaches its devastating conclusion.

Immediately warming is the reception the opening bars of Curse Curse gets, it's greeted like an old favourite rather than the typical reaction new album songs by most bands get at gigs like this.  Tim makes his way down to the barrier, stands surveying the melee in front of him and belatedly drops forward onto a sea of raised arms, struggling to keep hold of his microphone as people move towards him.  Ably assisted by Ron Yeadon's backing vocals, Dave's frenetic drums and Mark's keyboard wizardry the song is made for arenas of this size.  The fact it can stand toe-to-toe with Laid, which raises the heat and the joy in the room still further, is testament to the power of the record they've just released.

It feels like the crowd need a breather as it's been full-on from the start and the gorgeous, drifting, dreamy All Good Boys is the perfect tonic, but incredibly, given it was a b-side cast away in the depths of the back catalogue and even some of the band had forgotten about it, it works perfectly. The lilting acoustic guitar of the opening, Saul's vocals on the second verse, the multi-vocal chorus and ending to the song make it feel like an old friend and questions why it was ever treated so dismissively back at the turn of the century. 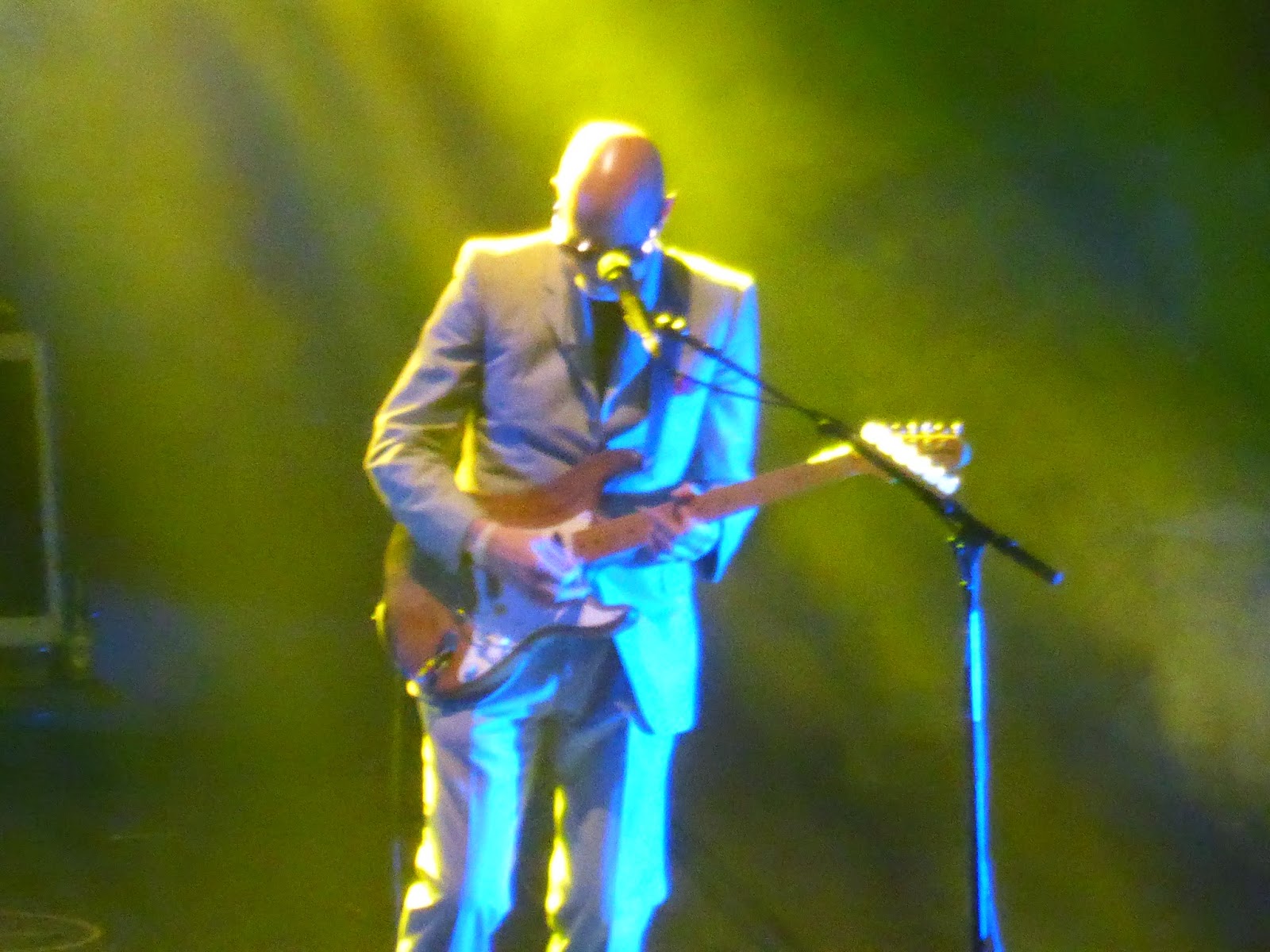 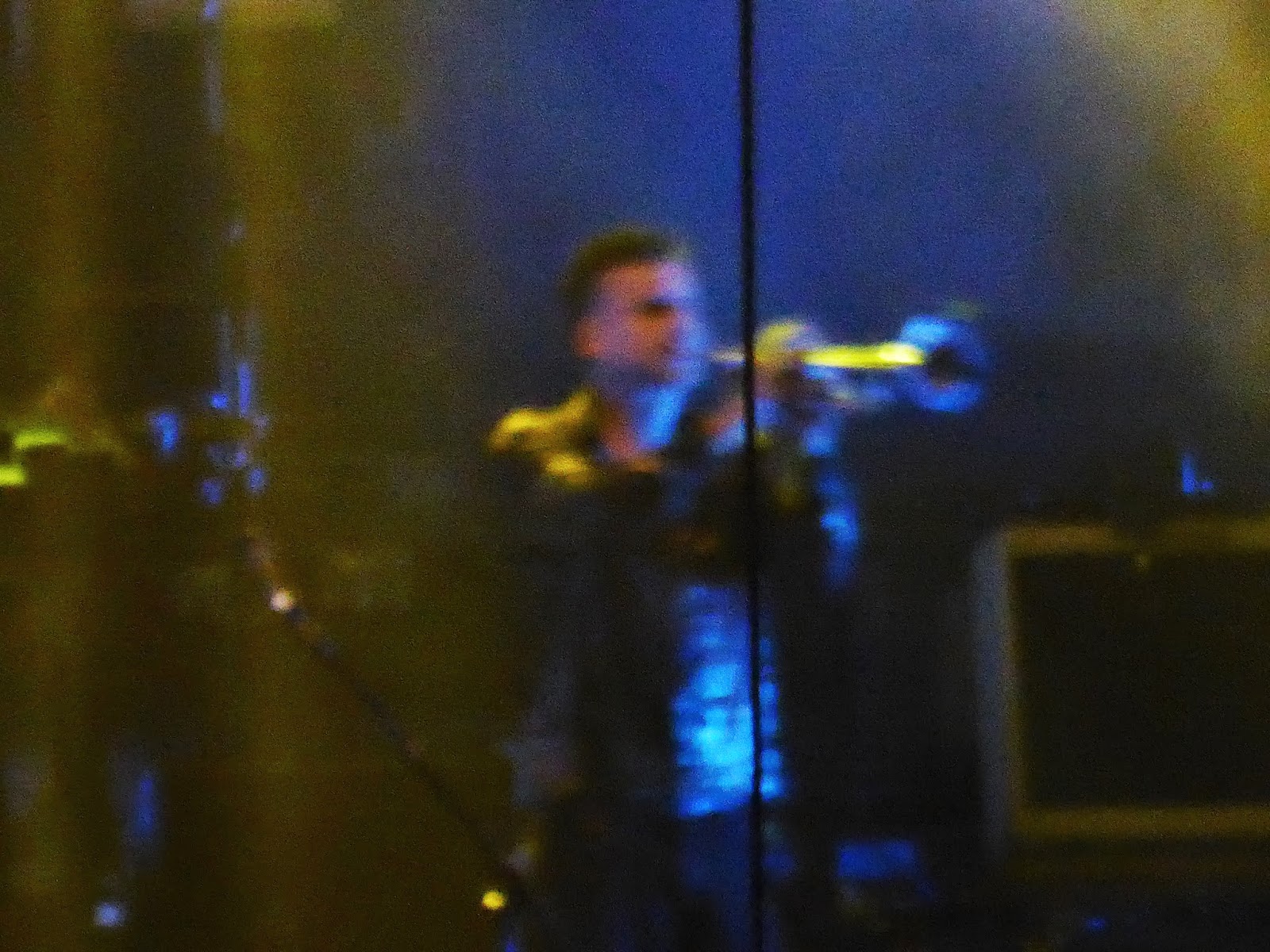 All I'm Saying has been stopped twice on this tour due to too much noise in the audience, but Birmingham perfectly respects Tim's request for assistance with it by keeping quiet and as the song builds, it feels like the love and pain of the song is being expunged from Tim and dissipated amongst each and every one of us.

We then turn the clock back thirty years for a duo of Hymn From A Village and Stutter.  The former feels nothing like its age, its buoyant, ferocious rhythm something that has lived in the bloodline and heritage of James' songs throughout their career.  Stutter is something truly extra-ordinary, it transcends being a mere song to be something absolutely unique and it's accompanied by a light show that at one point even threatens to overshadow the wall of sound that's coming from the stage.  Tim describes it as losing control of your mouth, something that needs to become an art if you want to be a singer.  The reason it's never been released in studio form is probably because it'd be impossible to.

Out To Get You is another one of those songs that benefitted from a rest.  It's a crowd favourite despite it obviously not being a single as it's a song that everyone can relate to, but its end section has been revitalised by it being taken out of the set and brought back in and revisited with fresh eyes and ears.  They then realise they've maybe missed PS out of the set in their rush from Stutter to Out To Get You (although it's not clear as this isn't on the setlist Larry tweeted later).  Tim jokes they couldn't have played the wrong song because "it didn't sound shit".

A trio of singles from different eras of James bring the set to close to its conclusion.  Getting Away With It (All Messed Up) is a calling card for probably the most difficult period of James' career on many levels, but such a triumphant soaring engaging song that never got its proper recognition until they came back in 2007.  Moving On is the bottling of modern-day James into one of those anthems that they're best known for, reaching with out-stretched arms and creating one massive group hug for everyone in the arena, particularly when Tim talks about his Mum's death as an "uplifting loss".  Come Home just gets more rampant, more jagged, more chaotic with age, growing old as disgracefully as many of their audience.

The main set closes with Gone Baby Gone.  Tim invites people up on stage to dance and many more take it upon themselves to chance their arm at getting up.  Only first played live a couple of weeks ago, it's been the revelation of the tour, having gone from the band being worried about how to recreate it to being the show-stopping ending, Tim losing himself in ecstatic dancing surrounded by his dancing acolytes, Ron again providing backing vocals that play against Tim's to great effect. It needs to be a single and stay in the set. 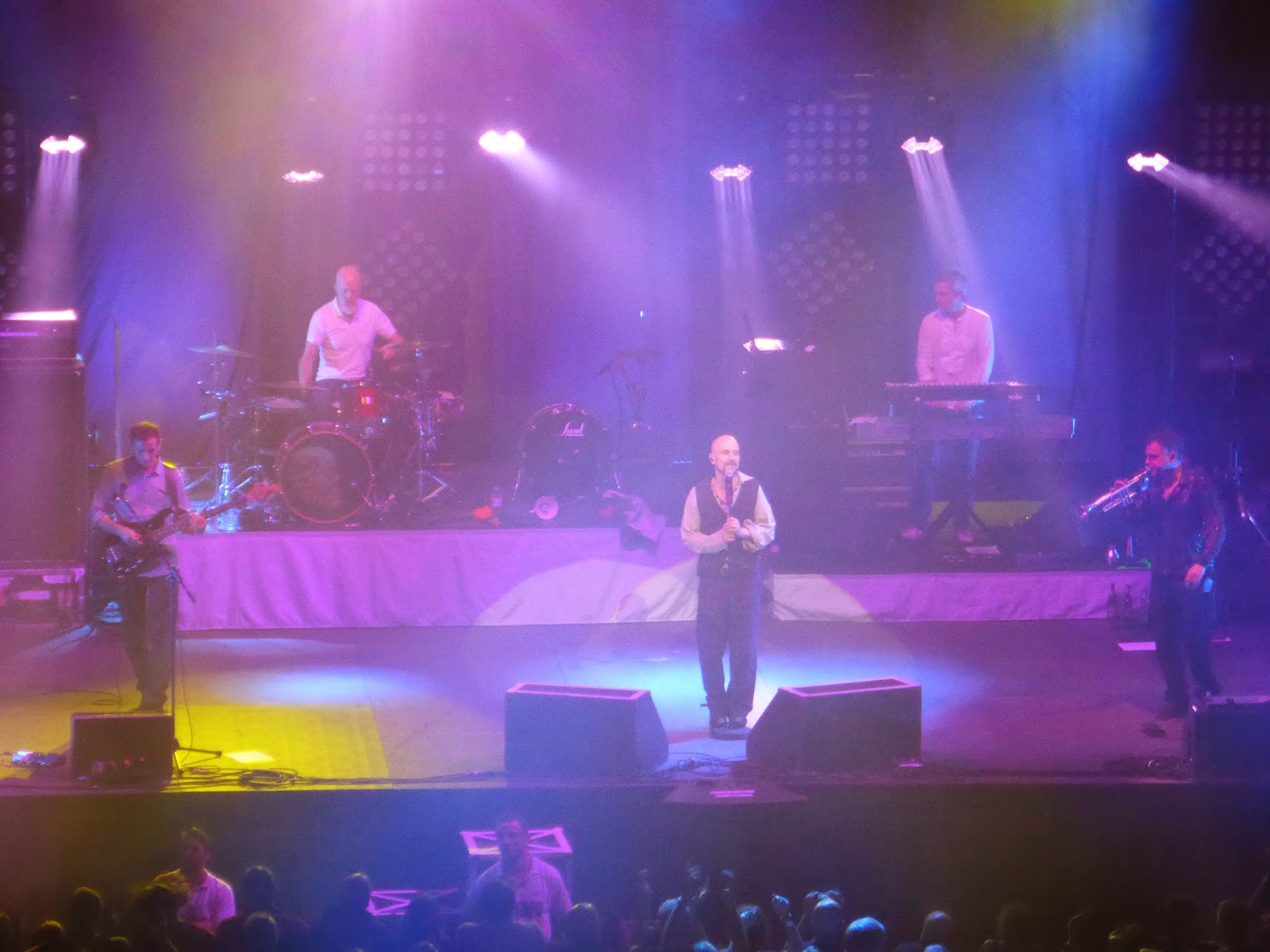 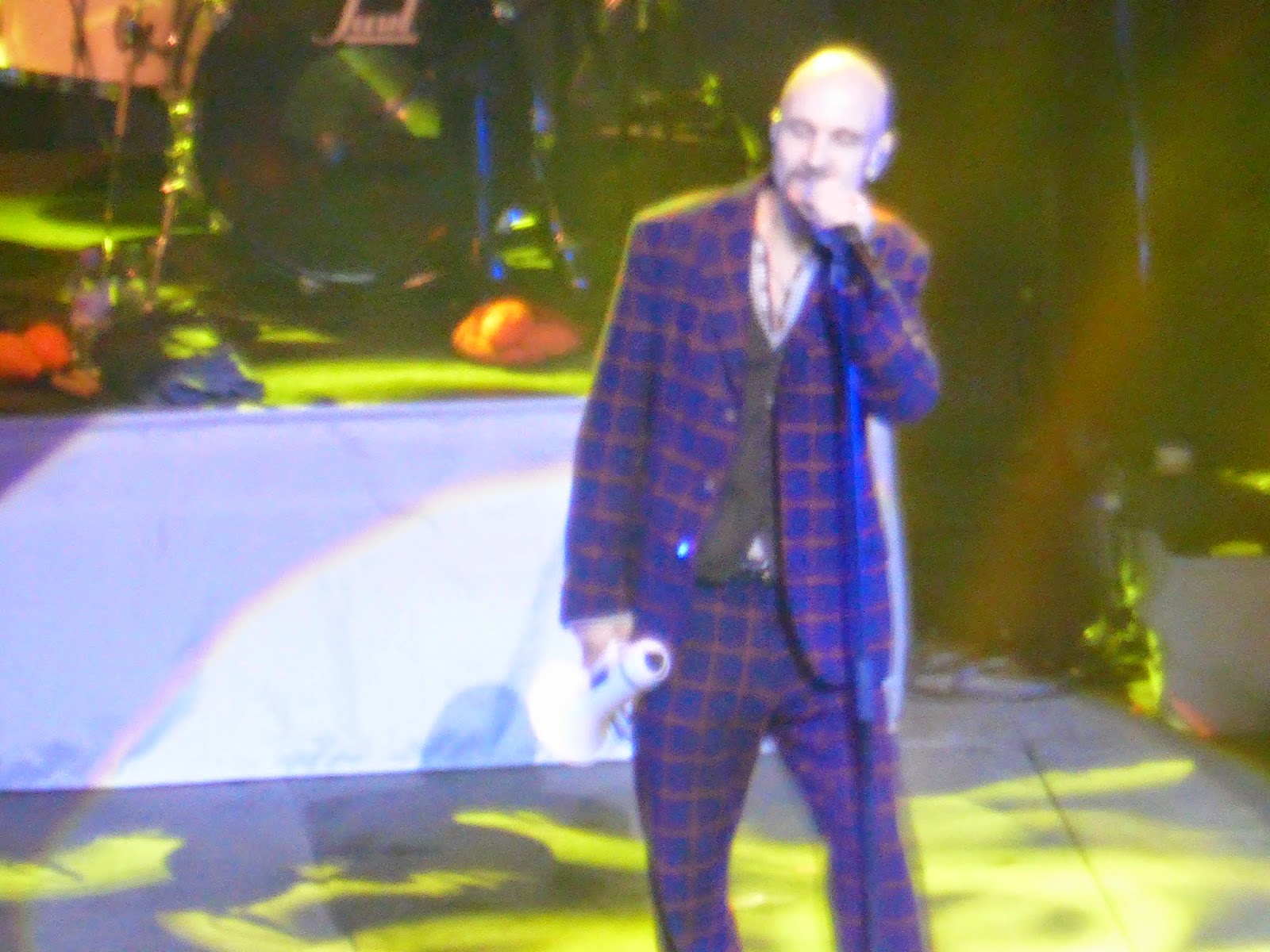 For the encore, Tim and Andy make their way out to the seated areas of the arena, Tim roaming around looking for connections amongst the sea of phones, ducking and diving past too keen admirers as the hall is filled by the sound of trumpets and guitars.   Interrogation is as dark and fierce as it's been on the tour so far showcasing a darker undercurrent to James's sound not as evident in their more radio-friendly moments.

They close with Sometimes and the great thing about it on this tour is that whilst it is now the obvious set closer it's ended up being different each and every night.  Tonight, the band stop playing, Tim stops singing and it looks like they're going to leave the stage until the crowd start it back up for a couple of minutes, then the band strike up something that sounds nothing like the song, a type of free-form improvisation and Tim goes back down into the crowd for a bit of crowd-surfing.

Tonight was one of those nights that James gave the crowd exactly what they wanted (well, maybe a few wanted the song that cannot be mentioned), but without playing it safe - tons of huge anthems, a large chunk of the new album but selected to match the mood and occasion, a nod to their very earliest days and a couple of songs that very few might know.   The sound and the lighting were pretty much perfect too.  What wasn't there in the terms of the usual Jamesian chaos was more than made up for in power and purpose.

James played Sound, Walk Like You, Frozen Britain, Ring The Bells, Curse Curse, Laid, All Good Boys, All I’m Saying, Hymn From A Village, Stutter, Out To Get You, Getting Away With It (All Messed Up), Moving On, Come Home, Gone Baby Gone, Born Of Frustration, Interrogation and Sometimes