The Miserable Rich continued their German/Austrian tour with a show in Wiesbaden at the Schlachthof.  Gudrun from Karlsruhe very kindly offered to review the show for us as part of her work for her own Meinzuhause blog.

It is an interesting turn of fate to send The Miserable Rich on a ghost tour after their last album was all ghost inspired. Ghost tour it is since the band was laid to rest in 2013 - the shows in Germany being organized to say goodbye to the music lovers in Hannover (Sunday), Wiesbaden (Monday), Nuremberg (Tuesday), and Graz (Wednesday). But - of course - the concert in Wiesbaden was as ghastly as the band members are miserable…

The evening began promising: While forming a queue in front of the door from the inside the last part of the soundcheck thundered Ringing the Changes and put a broad smile on all faces. From listening to the banter around it was clear that quite a number of people had traveled some distance and had a history with the band.

During the next hour the cave-like room filled up considerably. The first 2 m in front of the stage holding some benches and the place at the bar and behind the sitting area filled with about 150 people. 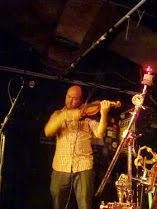 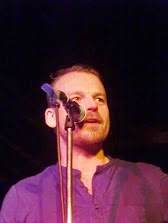 For the first (and only) time I had seen The Miserable Rich on stage in Beverungen. Each year the Record label Glitterhouse invites bands and about 1500 friends to their garden on the banks of the Weser river to celebrate music at Whitsun. Then The Miserable Rich were headliner of the first evening and I was immediately enchanted by the twinkle-toed and passionate show. Meanwhile their songs have grown on me and I was really sad when "our" story was ended from their side. Thus, when I got notice of the extra shows in Germany I put the Wiesbaden evening in my diary as first priority date. Even if the travel would be almost 3 hours in each direction.

Since then my anticipation grew from day to day. And it felt as if I was not the only one sharing that feeling in the room: When the musicians entered the stage they were greeted with rapturous applause!

They started with the first track from their very first album, the one with the prominent string theme. From this album six other songs were part of the evening - distributed all over the setlist. And they are still fresh and fabulous though matured in the meantime. Firstly it seemed like the nice and typical banter of the band would be tuned down to an absolute minimum. The reason given for that: Monday evening means an early end to the show. But soon fun started to taken of the rich people of Wiesbaden. Throwing away furniture which can still be sold profitable to Berlin residents. So, the band was probably just at the right spot (namely, the slaughter house) not to stick out too much around here. Also the German language was made fun of. Using the word „affengeil" as an example of utter uselessness to try to understand the German culture. Only very late on was Will allowed to contribute one of his elaborate and meandering tales to the audience and of course was told off for it in the end ...

Unexpectedly, in the audience there was a couple which had their golden wedding anniversary and got warm congratulations from the band. In the effort to show the admiration they counted the years of their respective longest relationships. All six members of the band together did not make it to half of 50 years… 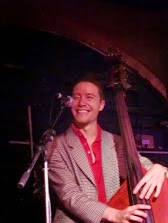 In the setlist there were many songs I dearly love. So the evening went from highlight to highlight for me: Chestnut Sunday, Laid up in Lavender, Let Me Fade, and On A Certain Night - then Oliver and Under Glass being a full blown finale with a lot of drums and pathos.

James had announced the latter with "Our last song, but who believes in that believes everything…" And obviously, Ringing the Changes was still missing and we asked for encore with a lot of fervor. We got two all time favourites with Monkey and Ringing the Changes (there we were!) but nobody wanted to let go. So the band left the stage and continued the set in the middle of the audience with Pisshead and Muswell. After that trying to say a final goodbye. Which did not work.

Enthusiastically we asked them back and got two more acoustic songs before we scattered into all winds to tell the story of a fantastic evening with a ghost band.

The German version of the review is here: http://meinzuhausemeinblog.blogspot.de/2014/11/the-miserable-rich-wiesbaden-171114.html

All words and photos by Gudrun from Karlsruhe