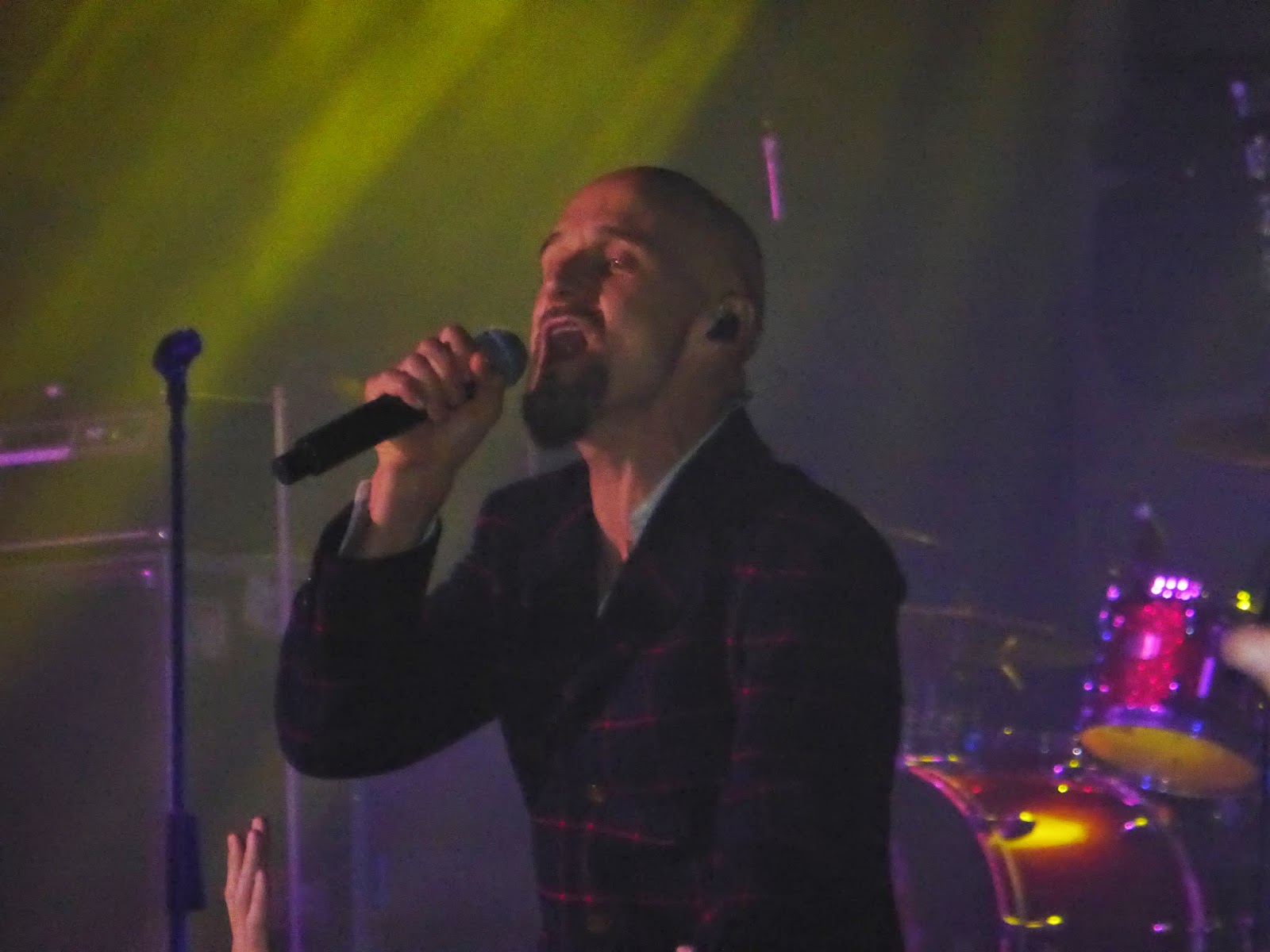 As James' La Petite Mort tour reaches its first weekend, the size of venues grows as they enter arena territory starting at Liverpool's Echo Arena.  We watched them walk the tightrope between crowd pleasing hits and their desire to challenge their audience with curveballs and unusual song choices.


The Echo Arena is one of those cavernous, potentially soulless places so often frowned upon by music fans when their favourite band gets to the point where they have to play to audiences of this size.   What transforms it though into something more intimate where there’s a connection between band and audience that so few can manage.  What doesn’t help is the proliferation of people who you have to wonder why they forked out £40 to get off their tits on poppers all night and stand with their back to the band.  But that’s James lot in these arenas and there’s moments tonight where you could have been in the smallest toilet venue in the country, such is the intimacy that some of the songs generate, helped by one of the most impressive sound set-ups we've heard in a venue of this size and decent sight lines throughout. 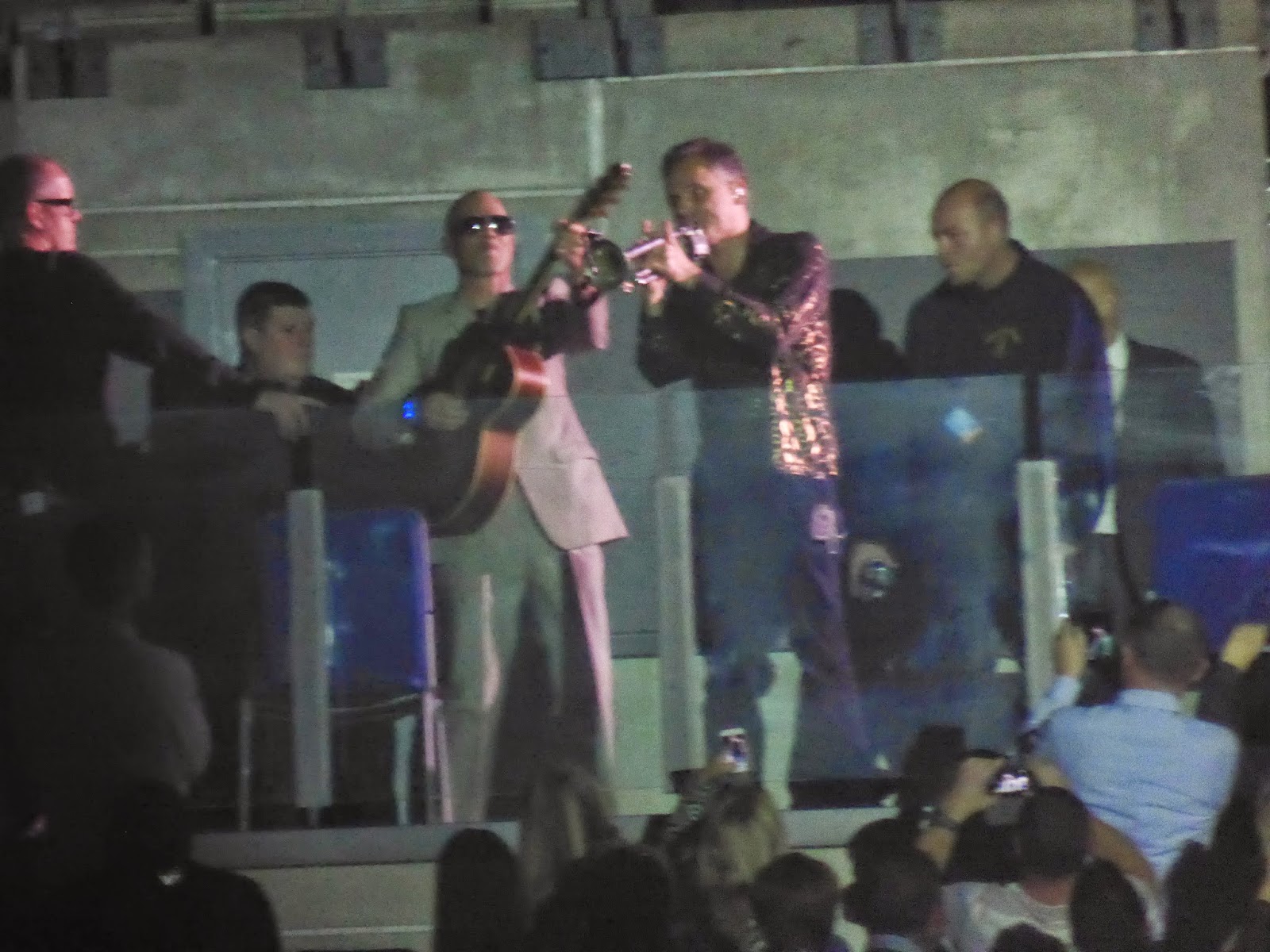 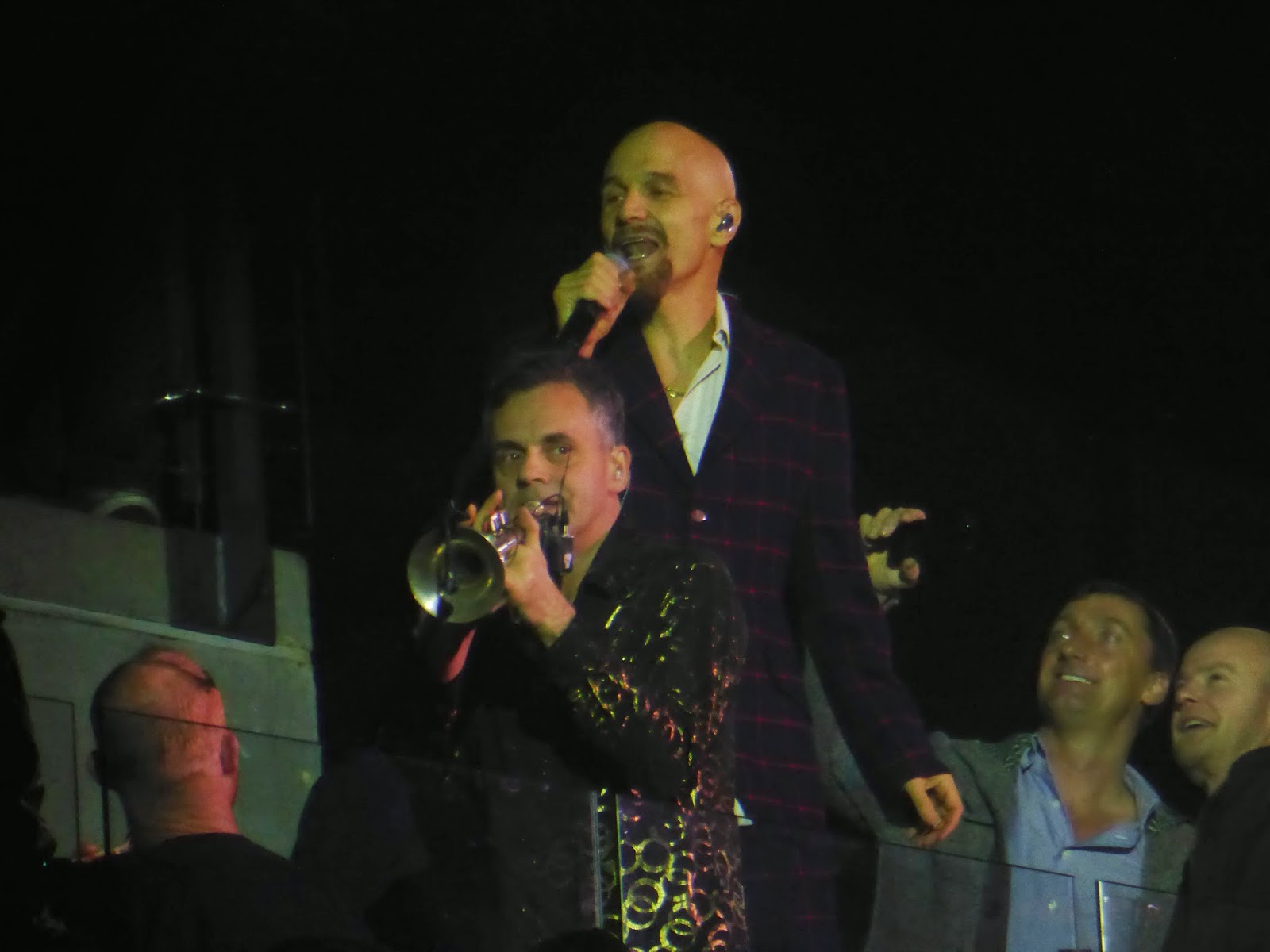 They start amongst their fans with Larry, Andy and Tim appearing at the back of the arena for a walkthrough the Level 1 seats for an acoustic version of Lose Control.  Whilst it’s one of their most recognisible songs, it also sets the audience on edge a little, takes away their expectations of a bombardment of greatest hits played straight like so many that will have trodden this floor.  Rather than head for the stage, Tim heads for the barrier as Seven strikes up, a beautiful rough extended opening section due to the time it takes to get back through the crowd.  Thousands of arms are raised skywards as they reach the punchline of “love can mean anything”.

Walk Like You is again one of the highlights, that out section allowing the band to take the song off in a different direction yet again, brimming with so many ideas, as many in one song as many bands can fit on an album.    They take the typical Jamesian route at this point of throwing in All Good Boys as a curveball.  The song itself fills the hall, the fraility in parts of the original replaced by a building sense of forcing itself into your face and letting you know it’s around and had it got the release treatment it deserved at the time, maybe more would have known it.

Sound, Curse Curse and Laid are rapturously received.  It still feels a bit strange when they play Sound mid-set because it naturally restricts some of their improvisational tendencies as it isn’t stretched to twelve minutes, but, having been out of the set for a while, they’ve worked on the arrangements and reinvigorated it.  Curse Curse is an absolute blast and has the whole place dancing, singing and generally losing themselves in the fun and abandon of the song.  This continues into its older brother Laid, the opening bars of Saul’s acoustic sending the whole place into delirium and Larry prowls the stage.   Although less familiar to the now heaving mass, Hymn From A Village bears its fists and gets feisty, the scrappy upstart of its youth being replaced by something more likely to bulldoze your front door down and make itself at home. 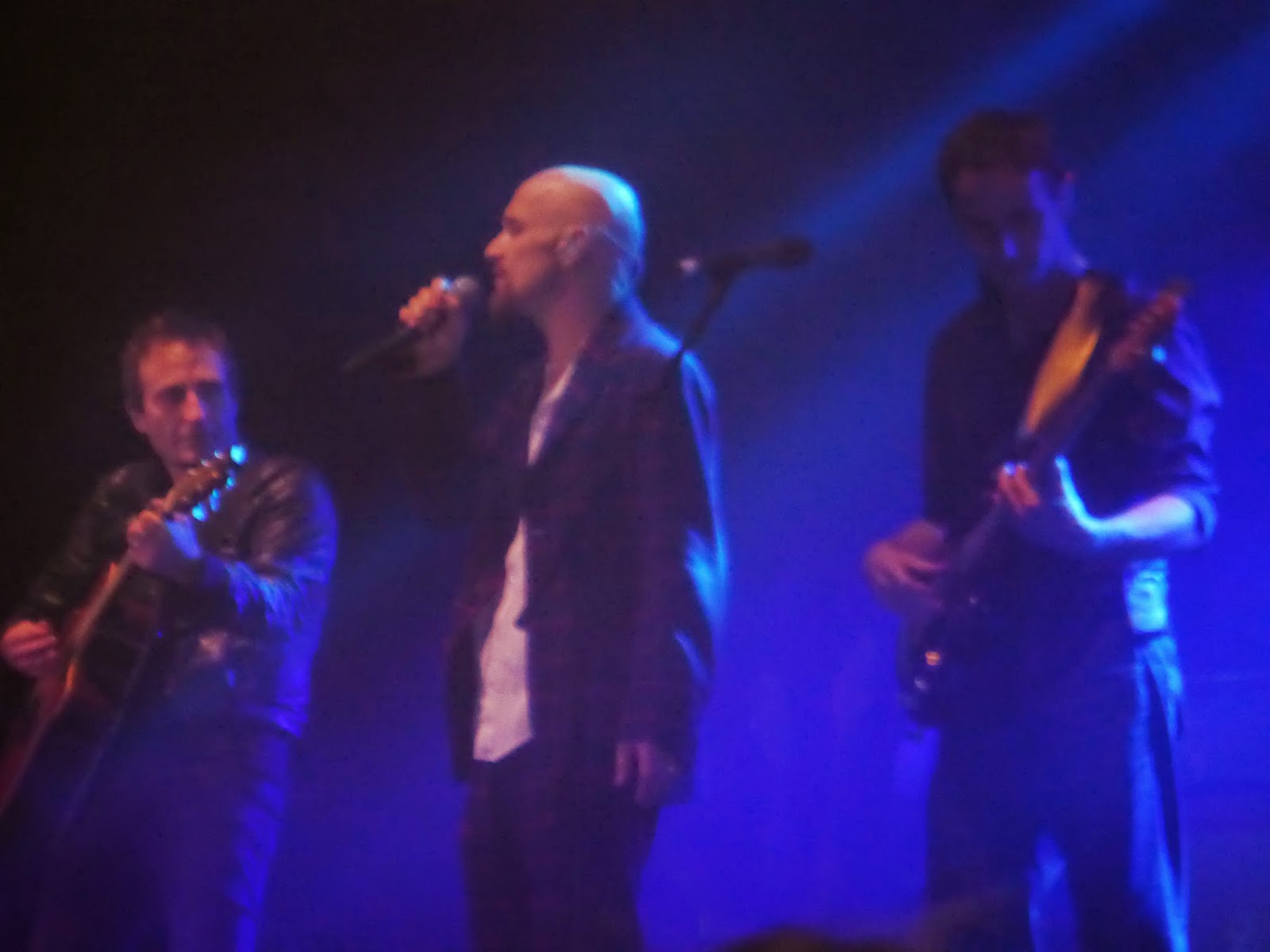 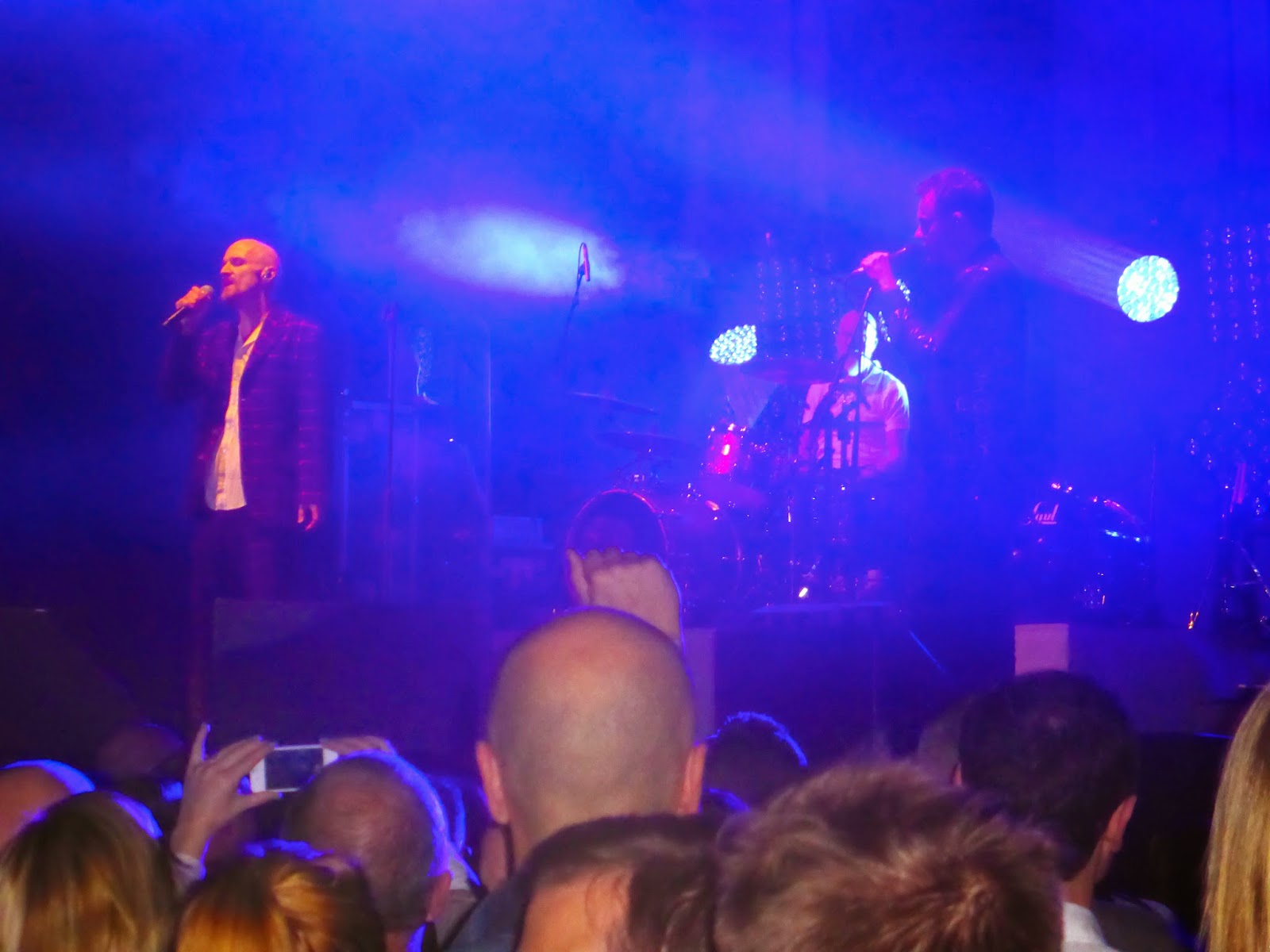 They slow things down with a trio of All I’m Saying, Five-O and Quicken The Dead and the wide expanse of the venue doesn’t mean that the feeling and meaning of these songs are lost as Saul’s violin pierces the expectant atmosphere during Five-O as he, Jim and Larry congregate in a huddle and Tim laments the loss of his mentor and friend Gabrielle on All I’m Saying.  The crowd’s reaction is, as you’d expect, mixed.  The majority want to listen and take in this more poignant, beautiful side of James’ work, but there’s a few, that find themselves ridiculous, who want the big songs and nothing else.

She’s A Star serves to bring those dissenters back in line, before James take a step to the left field and unleash a quarter of an hour of white noise onto their unsuspecting audience.  Greenpeace is nailed, that wild contrast between the two parts of the song and its final descent into chaos, illuminated by another wild light show.  The crowd are a bit bemused around us, not sure what to make of it, not aware of this side of their work which blossomed around the Whiplash album. It goes beyond connection at an emotional level with this song, it’s a brutal violent assault on the senses.   And then they follow it up with the killer blow which is Stutter.  There’s probably not a song in the annals of music with a history like this one, thirty years old, never committed to a commercial release in studio form, but a song that can never die.

We then enter the home strait with a beautiful rendition of Just Like Fred Astaire, one of those James songs that was born at the wrong time for them commercially.  It’s both unequivocally James, but also not like any other song they’ve done.  The reaction Moving On gets is testament to how well La Petite Mort has been received, and Gone Baby Gone presses home the question of how has it not been chosen as a single so far.  It’s not as polished live as the studio version, but it has all those traits of a James classic, punchy, sing-along and ripe for improvisation.   They finish with Come Home and the whole place, including the now much worse for wear popper poppers, are joined as one. 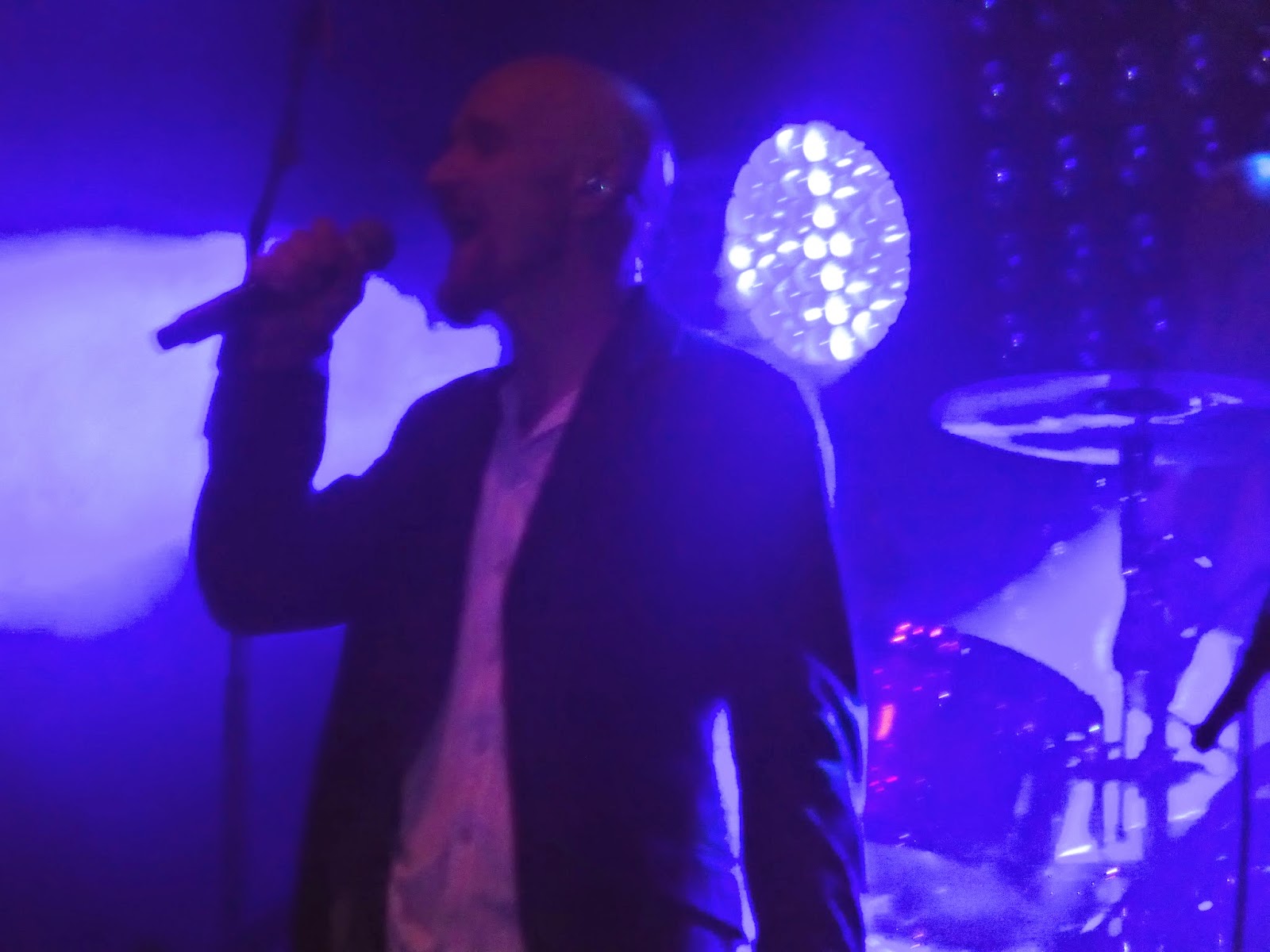 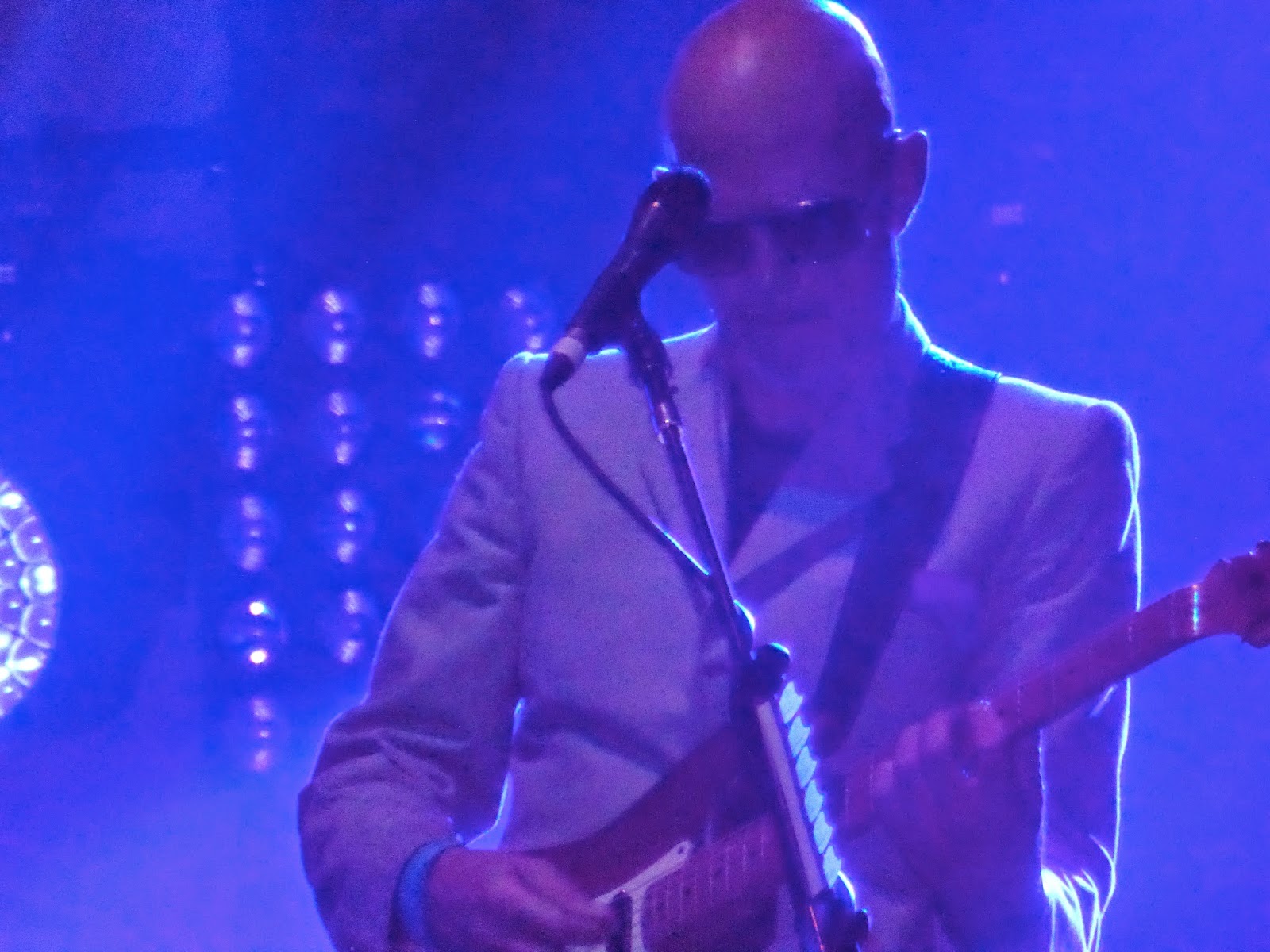 The encore starts with Born Of Frustration, Andy appearing on the balcony playing trumpet next to a girl who looks around in vain for him before finally releasing with shock that he’s actually stood next to her.   Tim appears the other side.  These moments bring those people up in the gods into the show by taking it to them, but you don’t know where to look as Tim makes his way through the rows, Andy dances with random people and the rest of the band take the song and deliver new twists on it.    Interrogation is a brave encore choice given the songs that have preceded it, but it’s a song that challenges its audience head-on, particular in the breakdown, where Larry improvises yet another different take on it.

Sometimes brings things to their inevitable conclusion.  Tim goes out crowdsurfing into the standing area until he runs out of arms and is forced to turn back.   It finishes with a chaotic singalong, in parts accapella, Tim’s reaction half-open mouthed in awe, half dancing.  Larry tries some ill-advised vocal improvisation of “Liverpool’s soul” that no one else picks up on.  They want to stay on and play another song, but are greeted by a chorus of boos when Tim tells us that they can’t because of the curfew, a rather flat way to end the evening and a bit harsh on the band to boo them.

These gigs are a bit of a conundrum for James,  a balance between pleasing the masses that just want certain songs they heard on the radio against their natural will to play whatever takes their fancy and which another element of their fanbase would love to hear.   They walk a fine line tonight, but on balance manage the rather clever trick of pleasing everyone, including the busker outside who unwittingly leads the exiting mass in a rendition of that song and filling his hat in the process.