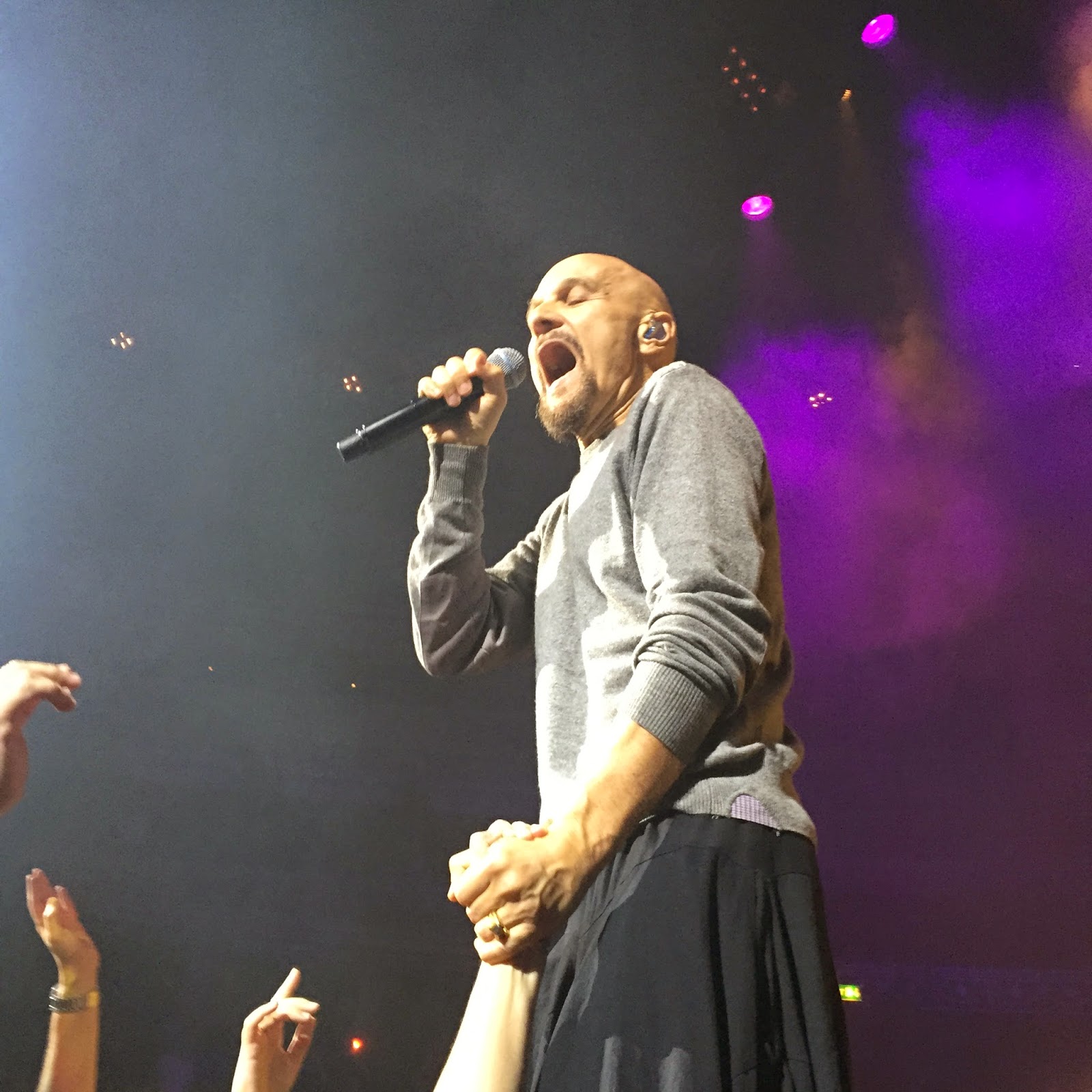 The James La Petite Mort tour rolled into London last night with the first of two sold-out shows, the first at the Royal Albert Hall before a date at Brixton Academy on Friday.

As is tradition in the bigger venues, the set opens with a walk-through the crowd by Tim, Larry and Andy for Lose Control and tonight they’re joined by Jim as they enter the back of the stalls.  Tim stops to dance with a man on the stairs, avoiding tripping as he did last time.  They finish the song on stage and already the anticipation is at fever-pitch as they kick into Oh My Heart.  In the soundcheck, Saul had said that compared to La Petite Mort, Hey Ma, from which this and later I Wanna Go Home come from, is the sound of the band finding their feet again.  It’s no such thing – whilst the production makes La Petite Mort a more rounded album, those two songs tonight cement the feeling that they’re not just a more powerful live band than ever before, it also applies to their studio work too.


The cheers that greet the opening bars of Walk Like You set the precedent for the evening as well.  Too often James London crowds appear to be there for the hits and the hits alone, but tonight, as an Australian gentlemen handed the mic later puts it, you’re not just watching James, you’re watching a choir.  With the freedom to improvise in the later stages of the song, this one is different every night.  The powerful beefed-up take on Seven is almost submerged by what goes on around it in the set tonight, but as Andy’s trumpet pierces the red-hot atmosphere of the hall and climbs the walls.

Curse Curse has the arena bouncing so hard you feel for the creaky floor as everyone hollers the chorus, a song that’s won the hearts of James fans with its tale of jealousy of what’s going on next door, that line “sounds from next door, someone’s getting laid” a nod to what comes next, its crazy twenty year old brother-in-arms which sees Tim invite dancers up on to the stage, breaking down whatever is left of the walls between band and audience.   The crowd have sung the first verse and chorus at the band before Tim even breaks into song. 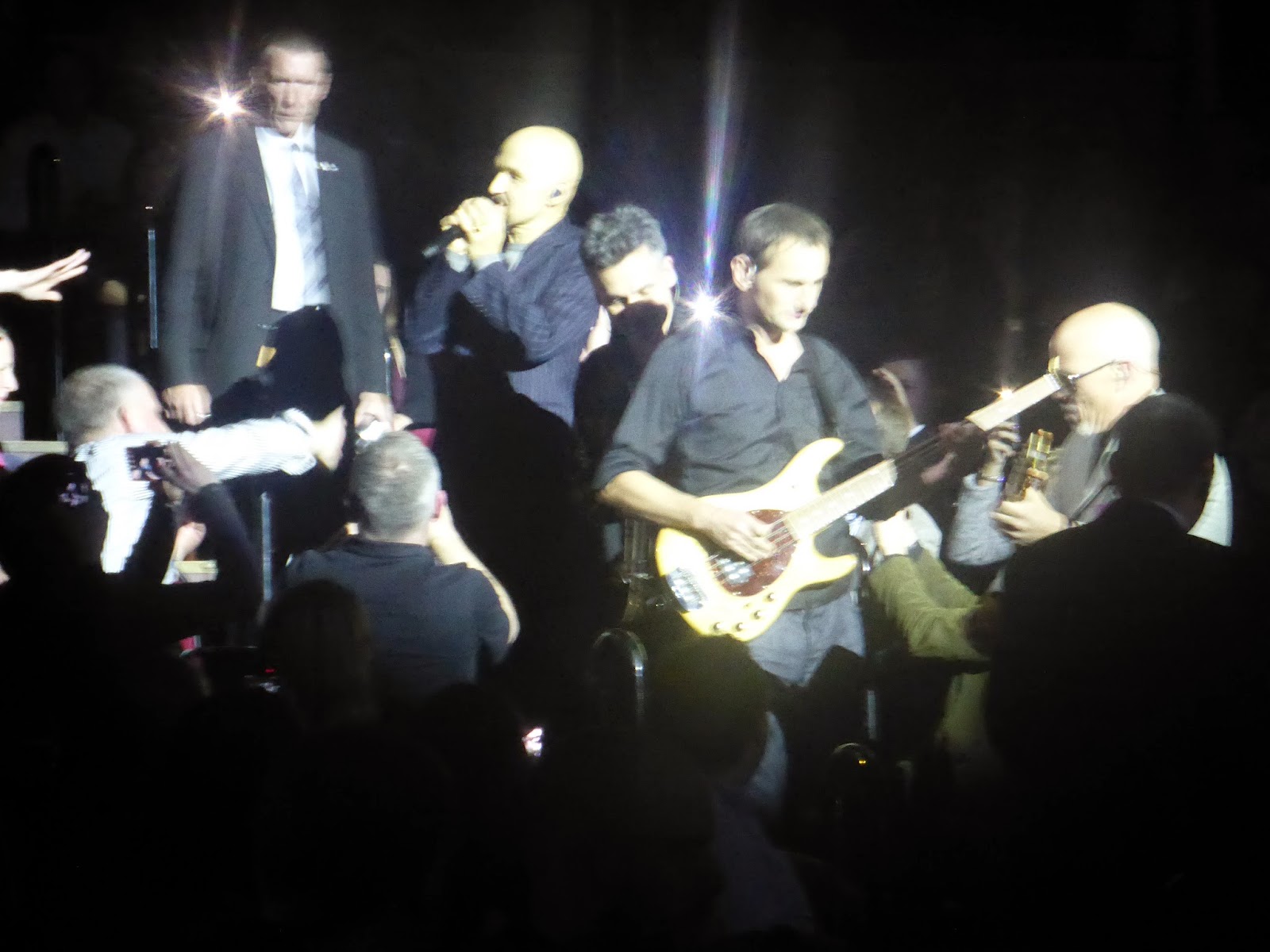 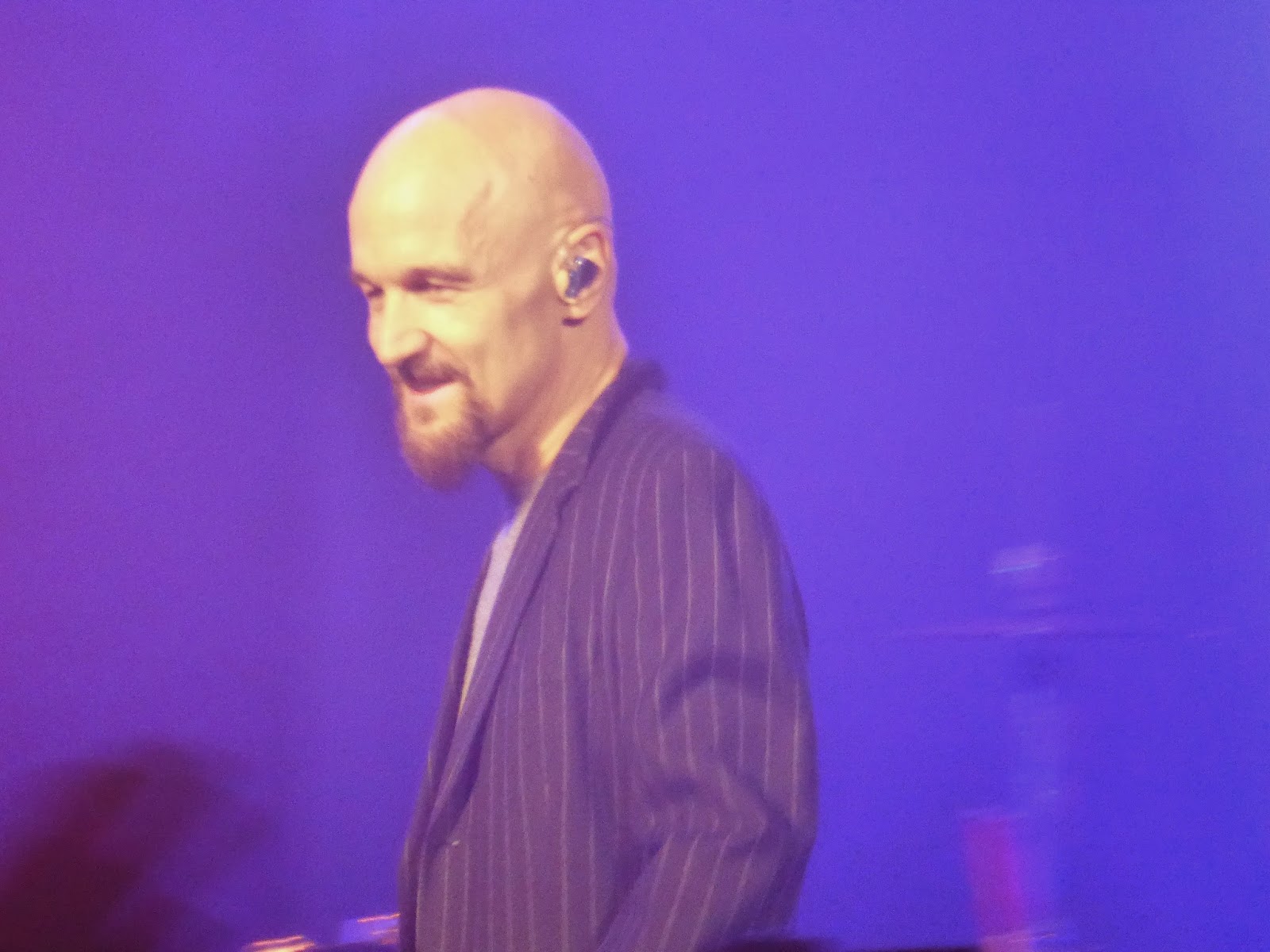 Tim commands “Let’s shake up the Albert Hall” as if that hasn’t already happened as the band kick into Jam J.  Strobes kick in, spotlights fly around the hall, up the walls, through the boxes and it stutters and jerks to its rampant conclusion.   Please release the other twenty-five jams now please.

The mood is taken down, without losing the crowd, with two slower songs.  I Wanna Go Home and Out To Get You are no mid-set excuses to nip to the loo though. Both of them generate a mix of mouthing along to the words or standing in awe taking in what’s going on up on the stage.  Both showcase Saul’s outstanding violin playing, the former the amazing strength of Tim’s voice to hold a note for longer than us mere mortals could imagine.   Like the rest of us, Tim is slightly awe-struck by what’s going on around him, taking a seat on the drum riser to take in the improvised outro to Out To Get You.

What’s The World gets its first airing of the tour, described by Tim as the first song they ever wrote together.  Like Hymn From A Village, it still stands tall and proud today thirty years on, its spindly almost cack-handed energy distilled into something more powerful but not less impactful with the addition of the extra musicians and the wisdom of age.

Vervaceous is introduced as a song that hasn’t been played for a few years and which could be “incredibly beautiful or a big belly-flop”.  Thankfully it’s the former, the Hall being perfect for its swoops, descents and crescendos and the reverb on Tim’s vocoder treated vocals accompanied by stunning mood lighting which accentuates the impact of the changes of pace.   It segues seamlessly into All Good Boys.  This resurrected gem is absolutely perfect for tonight, the ending matching the theatrical splendour of the room it’s being played in, the delightful contrast between Tim and Saul’s vocals. 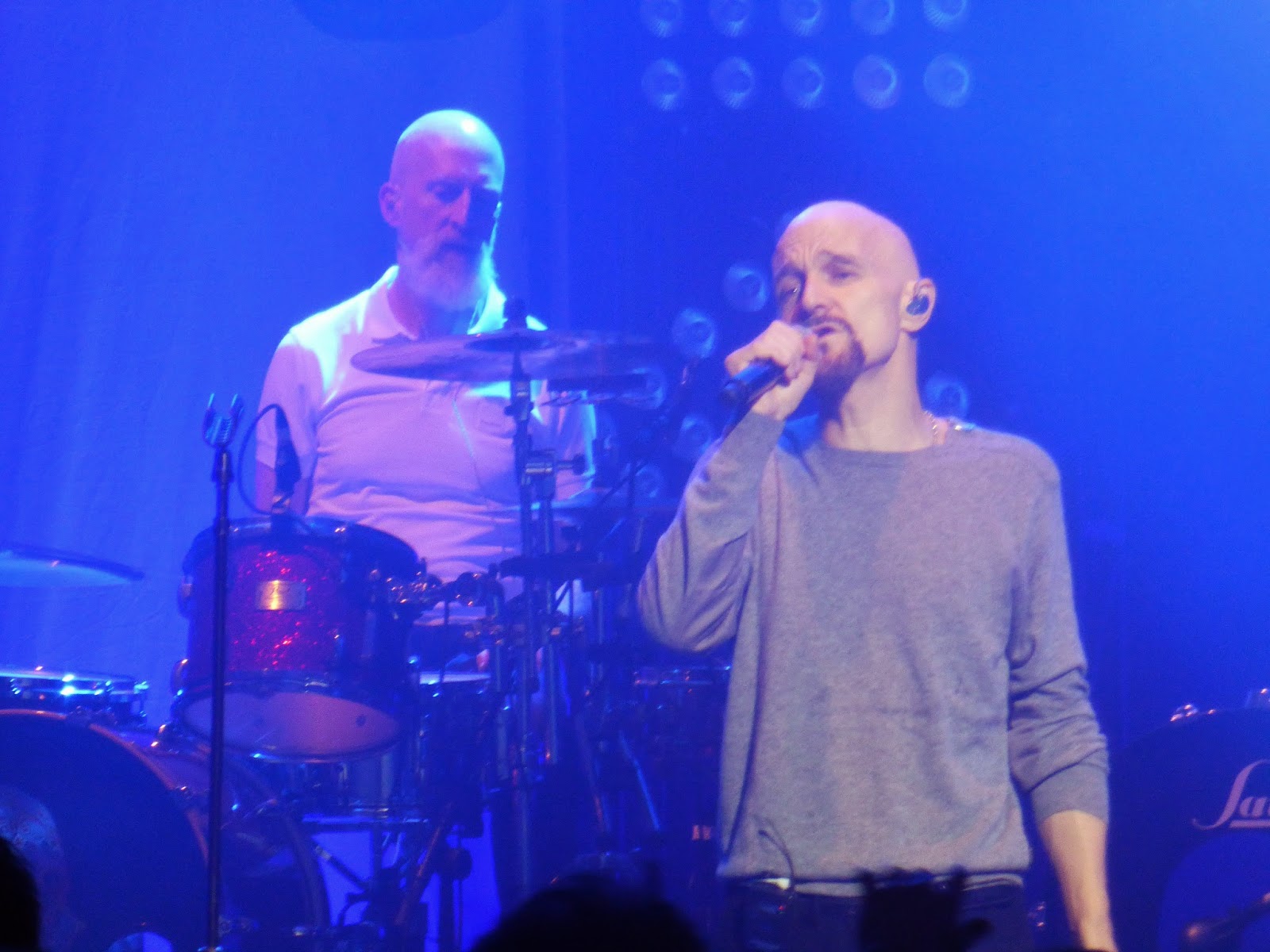 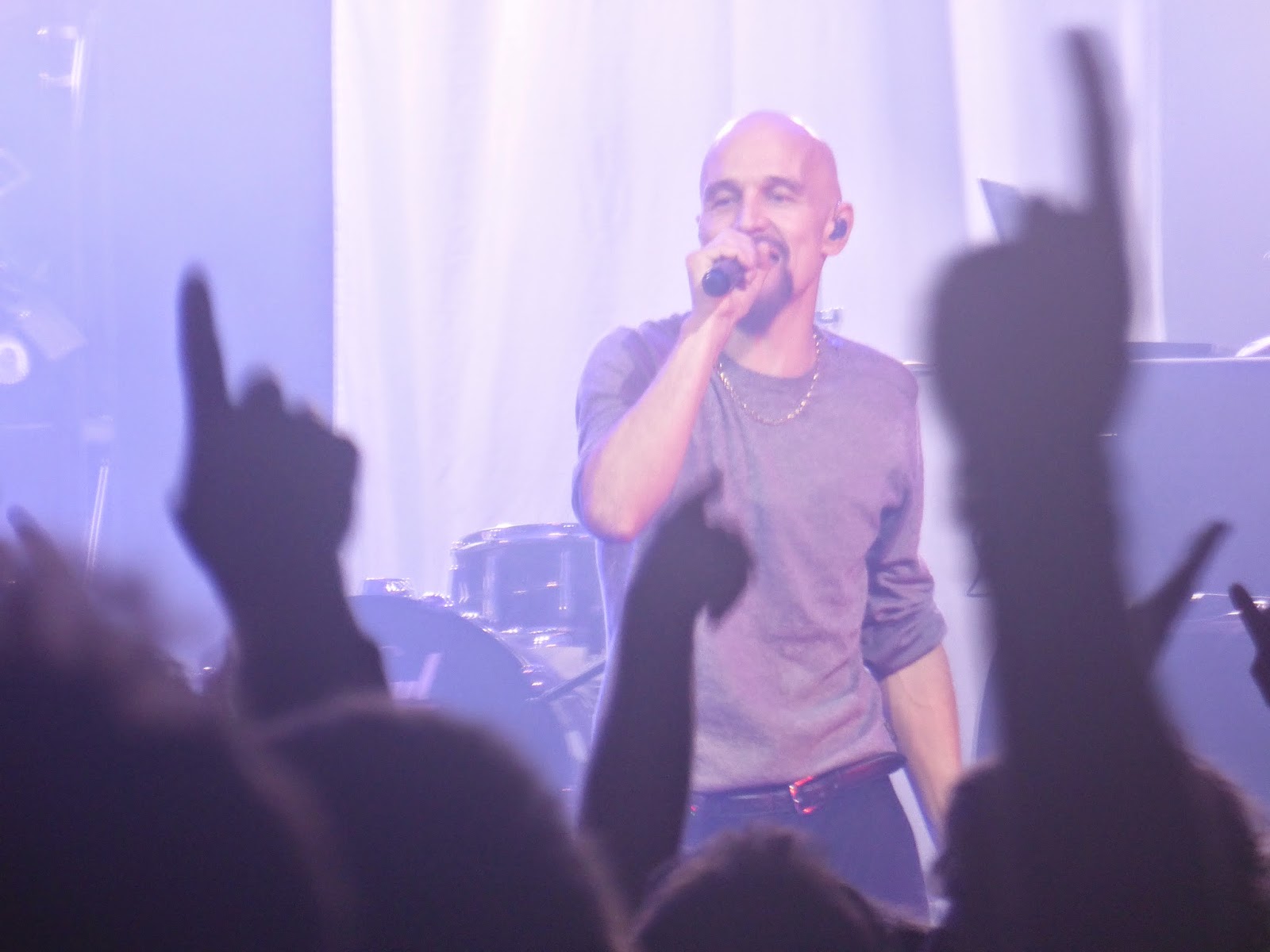 The impact of All I’m Saying is similar, the crowd being respectful when Tim explains the song’s meaning and that he needs help (silence) to get through it.  I’d harbour a bet that there’s no one in the room that isn’t thinking of someone elsewhere when Tim proclaims “All I’m saying I’m missing you” such is the impact of his lyrics and how his personal tragedies are being exorcised in this communion of music and words.

The crowd’s patience and attention is rewarded with a series of hits and future hits to end the main set.  Tim comes out into the crowd at the start of Getting Away With It (All Messed Up) and surfs his way back to the mixing desk, his long skirt getting hitched up as he does to thankfully reveal a pair of white long pants to protect his modesty, all of this with the biggest grin on his face and again not losing a word as he does so.

Moving On has all the poignancy of All I’m Saying earlier in the set.  The floor raises its arms in unison as they hit the chorus, testament to how well the La Petite Mort songs have been received and the audience they’ve reached even if the chart positions don’t necessarily reflect that.

Tim invites more dancers up on stage for Gone Baby Gone, which they’re trying to persuade Cooking Vinyl to release as the fourth single off the album (my call would be a four-track Record Store Day 12” single to showcase some of the seeds of the album sessions that we’ve not heard yet).  Whatever, it’s playful loose-limbed structure is perfect single material and the dancing isn’t solely restricted to the stage as the arena bobs up and down and most of the stalls seats are now up.


Come Home closes the main set.  In the absence of that song, it’s the most recognisible one to UK audiences and the response it gets is the most rapturous of the evening. There’s lots of twenty five years since Madchester style dancing going on around us and everyone matches Tim word for word as the lights once again emphasise the impact of what’s going on stage.  It’s a powerful way to end the set and testament to the band’s policy of resting songs that this one has come back revitalized and as fresh as the day it was conceived.

For the encore Andy appears in the stalls stage right as his trumpet calling card signals Born Of Frustration as the opener to the encore.  Tim can be heard but not seen at this point until a single white light points up to the third tier of the hall where he’s made his way up into the Gods.  This showmanship and taking the show to those with such limited view is a sign of their will to ensure everyone in the place walks away feeling like they’ve been part of the show.  The floor don’t know where to look, up at Tim, up and Andy or the ferocious noise on stage as Saul and Larry attack the guitar lines with such intensity. 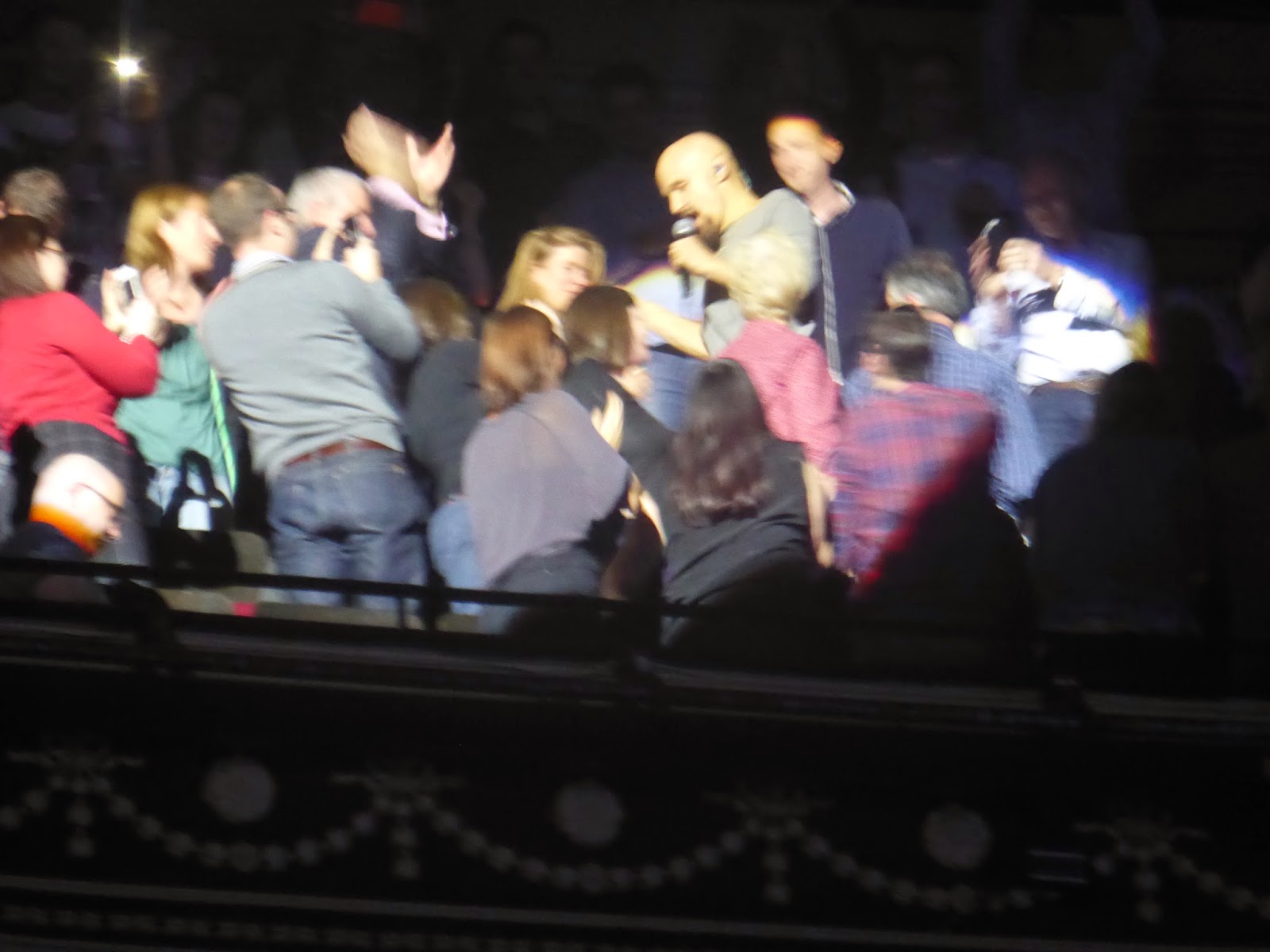 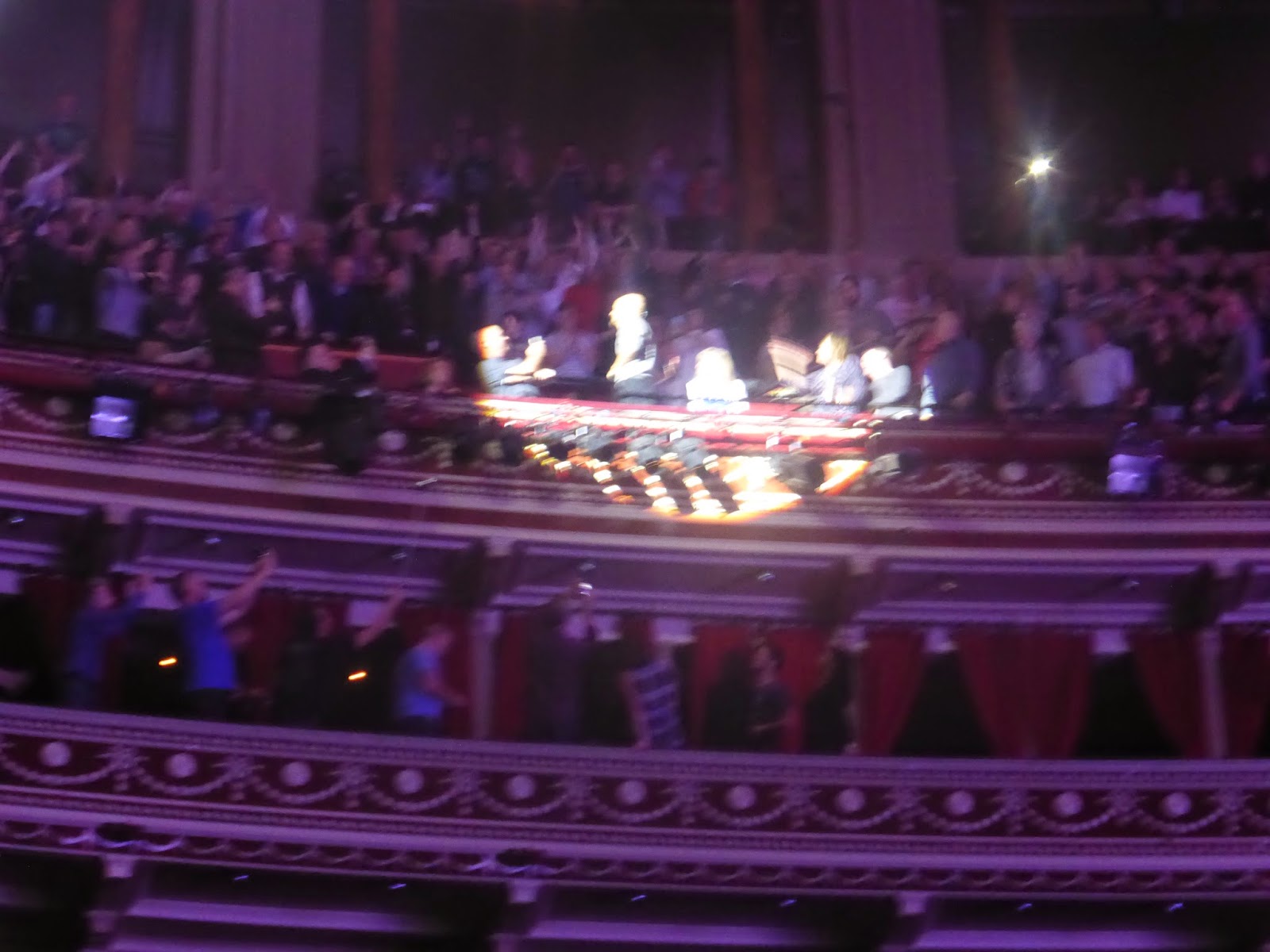 Somehow Tim makes his way back down quickly as an extended intro to Interrogation kicks in.  Thankfully we get the full unabridged version tonight as it gives them the chance to improvise again, the song having that potential the band have squeezed out of Sound to be extended and fly off at tangents and feed off the power in the room. Larry’s guitar solo again deserves particular mention even though it’s a different approach to it to the one he’s taken on other dates on the tour.

They close the first encore with Sometimes, their ultimate song of communion,  a word that’s hard to avoid talking about this tour and five thousand voices join together adding even more lift to that given to it by the on-stage backing vocals.

They leave the stage, but no one is going anywhere at this point so they come back and perform Top Of The World.  Tim tells us that no one knows what they’ll play next in their crew, sound and lighting set up.   As first Jim’s rumbling bass then Saul’s piercing haunting violin ripples over our heads and up the sides of the hall, it’s testimony to James’ ability not just to deliver the adrenalin fuelled hits that they’re best known for, but also their mastery of lower volumes, highly affecting songs like this one.  The crowd shut up and listen, frozen silent by the sheer majesty and emotion of it.   It’s not your usual gig closer, but then this is no ordinary band of course.

It’s nearly thirty years since James played the Royal Albert Hall supporting The Smiths and it took them twenty-five to get back there in 2010.  They were back the following year with the Orchestra Of The Swan, but tonight is the night they really conquer it, making those huge walls of boxes feel as intimate as the tiniest venue in the world.  Despite leaving out crowd-pleasers such as Sit Down, Ring The Bells, Sound, Tomorrow, How Was It For You?, Just Like Fred Astaire and Say Something, they still cram twelve singles into tonight’s set, whilst investigating most periods of those intervening thirty years.

James played Lose Control, Oh My Heart, Walk Like You, Seven, Curse Curse, Laid, Jam J, I Wanna Go Home, Out To Get You, What’s The World, Vervaceous, All Good Boys, All I’m Saying, Getting Away With It (All Messed Up), Moving On, Gone Baby Gone, Come Home, Born Of Frustration, Interrogation, Sometimes and Top Of The World


James' official website can be found here, where you can find details of their November arena tour. They are on Facebook and Twitter.   Some of the band - Tim, Larry, Andy and Dave - are also on Twitter.