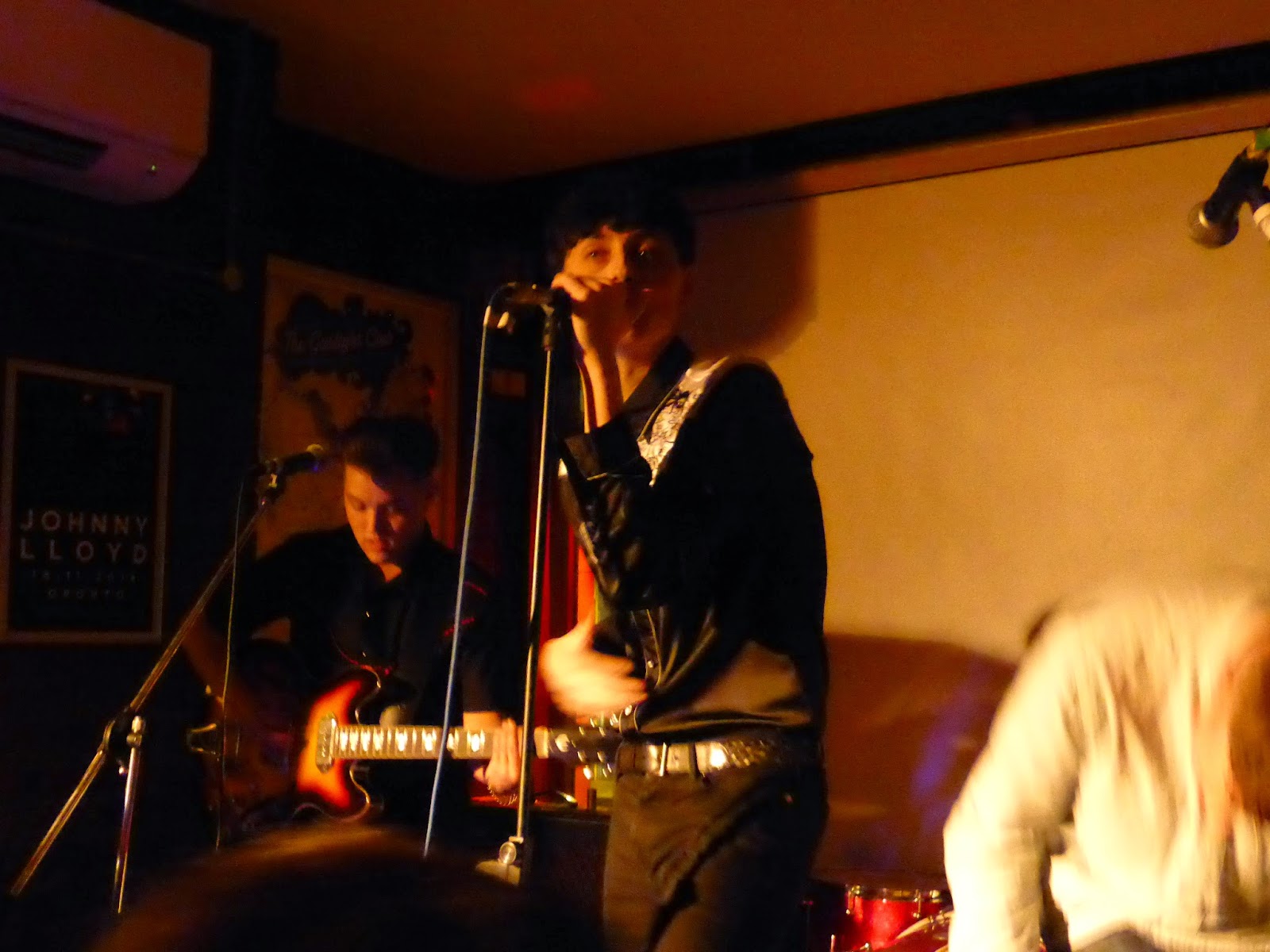 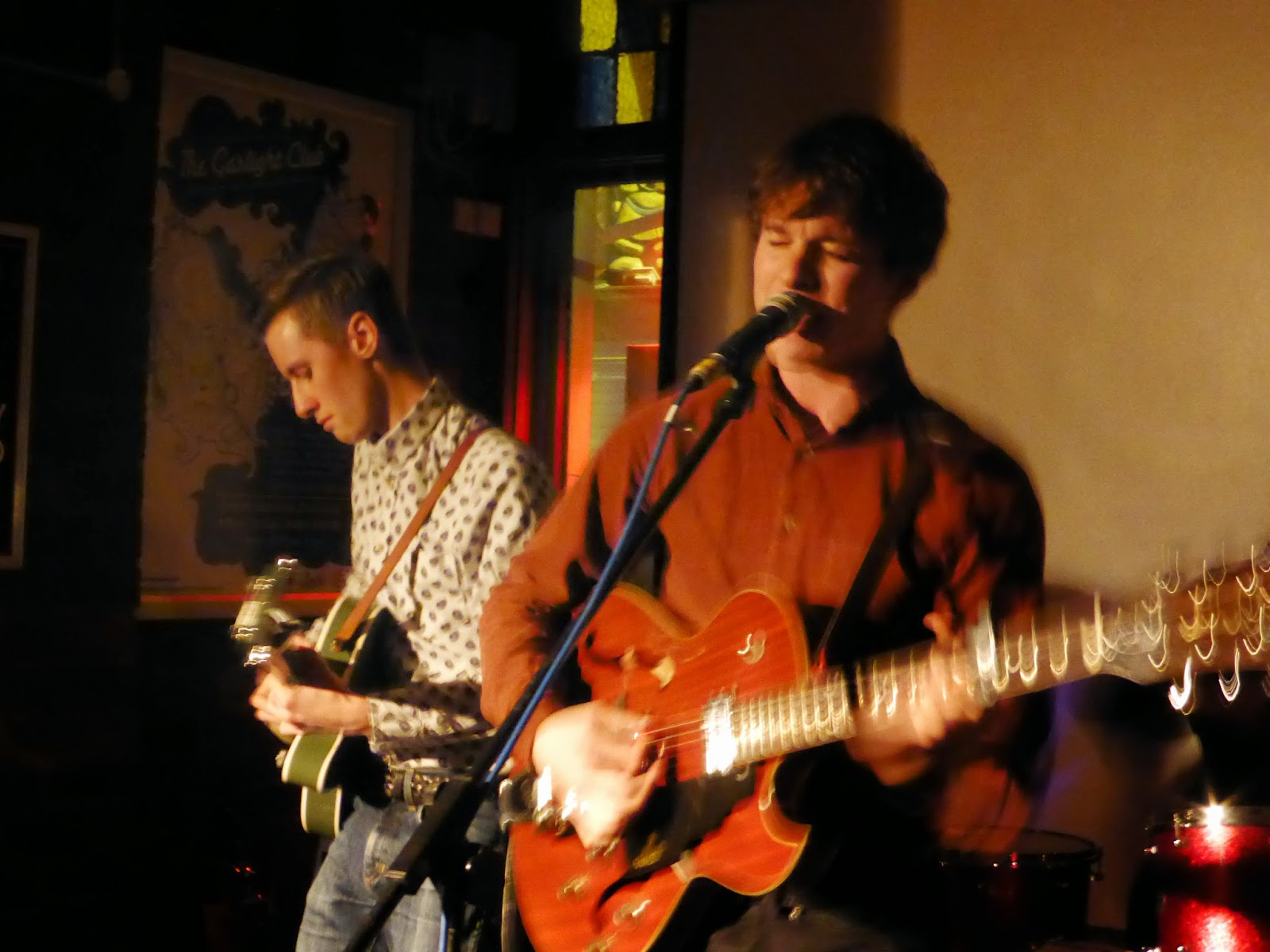 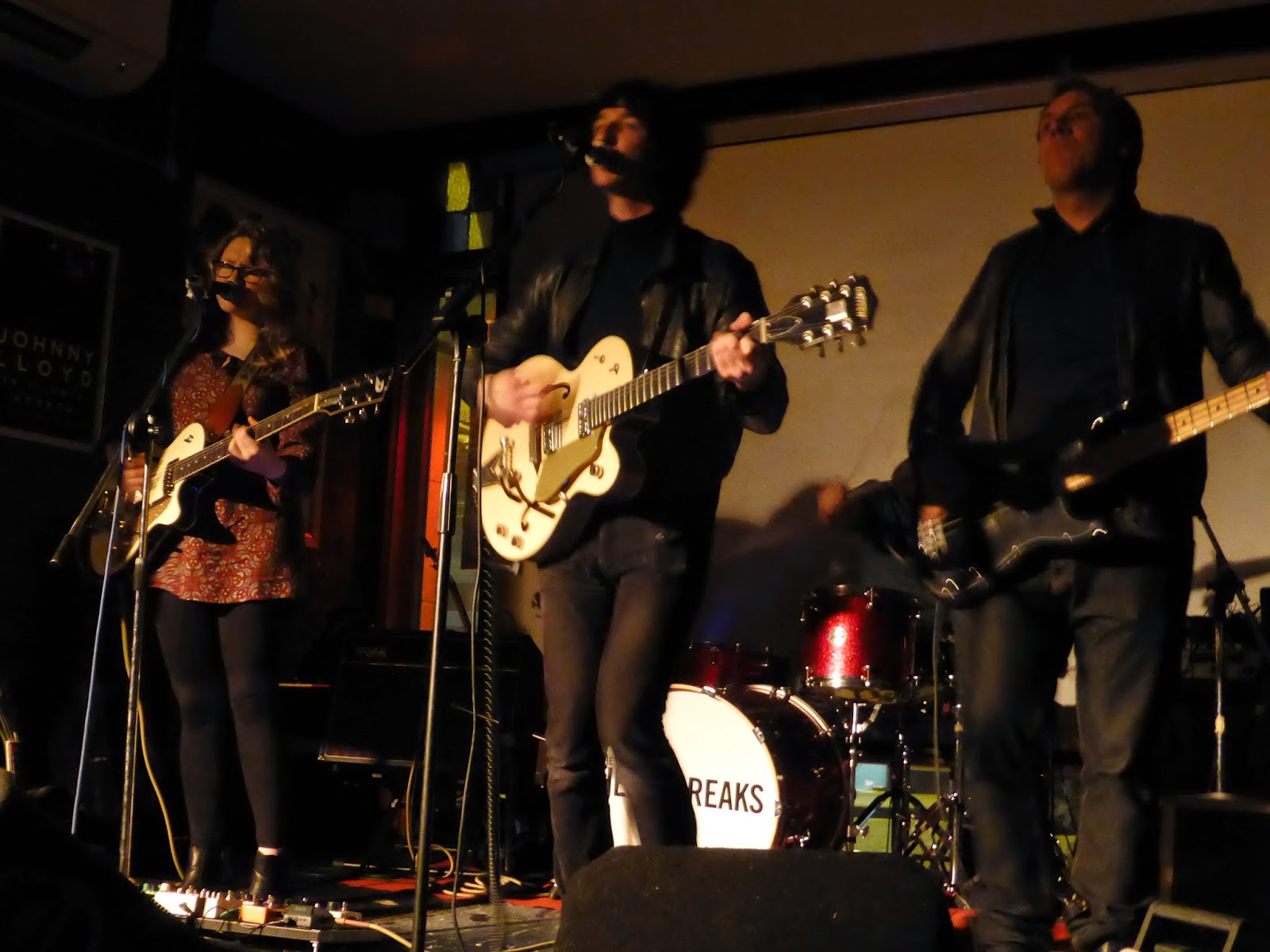 We made the short trip over the Pennines to catch three bands who have not forgotten the art of creating simple emotive pop music that has you tapping your feet and singing along throughout.  As The Heartbreaks played the first night of their short UK tour, they were supported by Sheffield's finest and Even The Stars favourites High Hazels and York four-piece The Blueprints.

Opening up the evening proceedings in the small but beautifully formed Oporto are The Blueprints from York.  They're a four-piece with Stuart Allen on vocals and guitar, Sophie McDonnell on lead guitar and backing vocals, Mark Waters on bass and Russell Broadbent on drums.  They play seven songs, four from their debut EP The Shipping Forecast and three from their recent follow-up The Mountaineer. 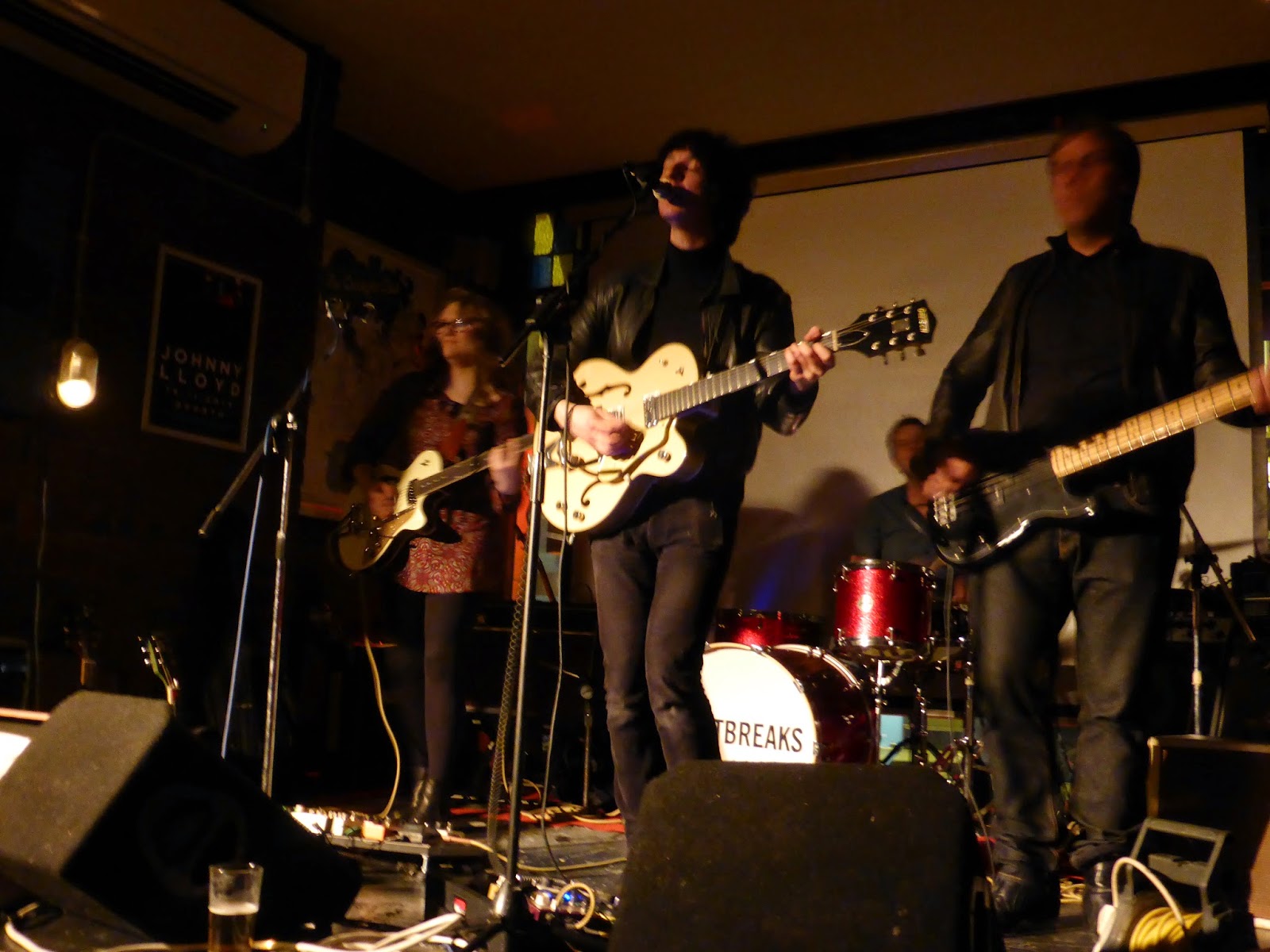 They provide a tough act for the other two bands to follow.  They're an incredibly tight unit, accomplished musicians with a very natural feel for their songs. Robust, slightly threatening bass lines, lead guitar catching onto hooks and melodies in every song and, like so much great pop music made with the holy trinity of bass, guitar and drums, the added special ingredient of backing vocals which fit and complement Stuart's voice and the way the songs were written.

They're not bereft of a sense of humour either, joking about roadworks on the A64 back to York and how it means they'll miss their favourite kebab shop in Tadcaster and then telling us that "pop songs and shit banter" is their speciality.

There's not a weak song amongst the seven, but our favourites were Laws Of Nature and "the happiest song ever written about depression" called Another Breakdown, both from The Mountaineer EP until they saved their best for last.  Walk is the opening track on The Shipping Forecast and, in our opinion, their best song that we've heard and it's fitting they use it to close the set.

Next up are High Hazels, treading the boards of the country in support of their splendid self-titled debut album which came out last week.  Live, they retain all the melodic drama of the record, but the sound is beefed up even on the more fragile moments of album centre-piece Hanging Moon and the one non-album track French Rue (from last year's In The Half Life EP) to fill out the room and silence the chatterers at the back. 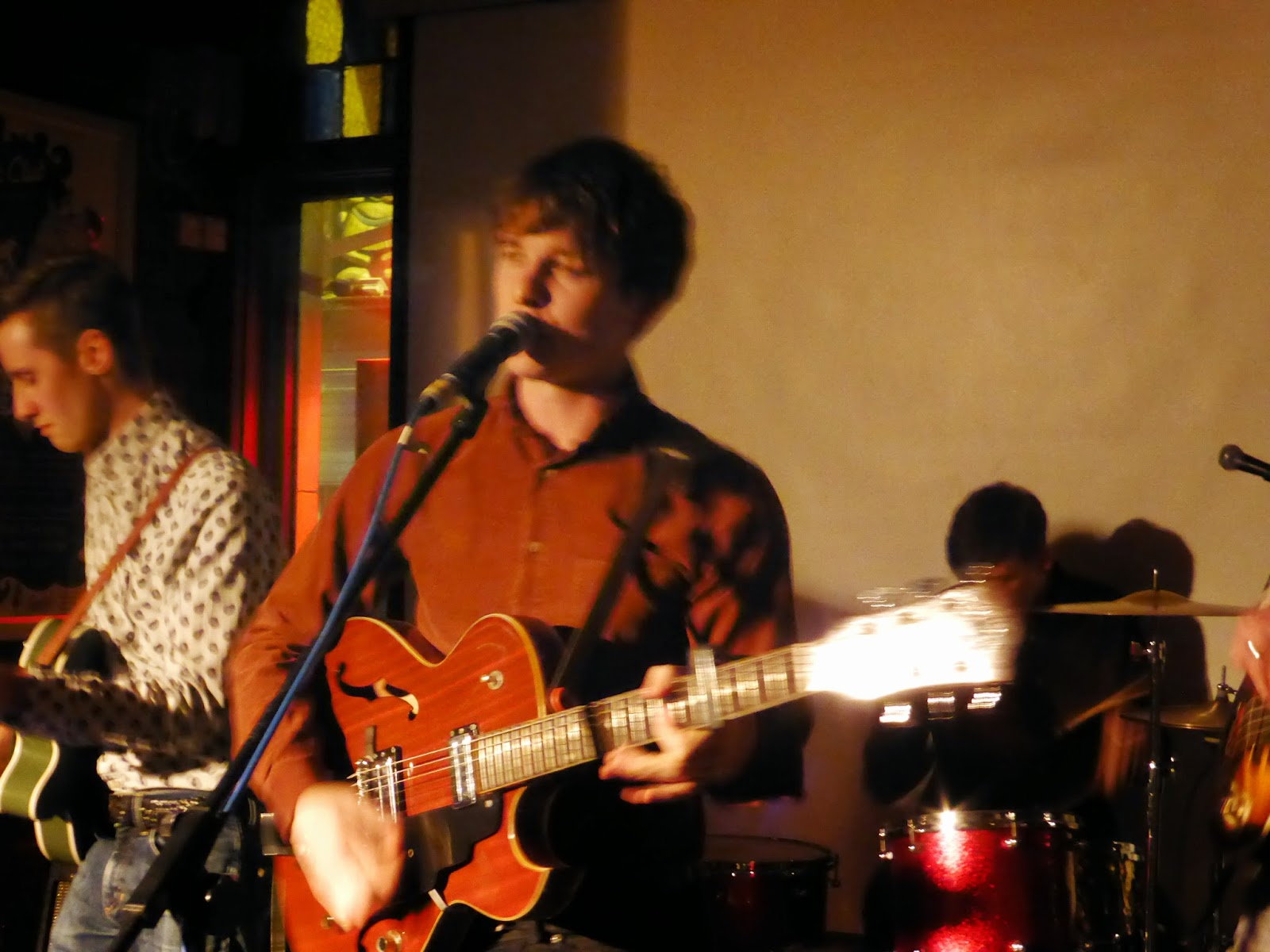 Like so many of their Sheffield contemporaries (The Crookes, Richard Hawley), there's an obvious pride in their live show, evidenced by the number of guitar changes made by front man James.  Everything has to sound just right, the songs listened to the way they were crafted and intended to be heard.  The eight-song set gives them enough space to show the range of their work so far, from the buoyant, effervescent radio-friendly three-minute guitar pop of singles Misbehave and Hearts Are Breaking and next single Loneliness Inn through to the aforementioned softer aspects of their work to date.

They have the songs to go far and the classic all-boy four-piece dapperly dressed look that should have girls swooning and boys looking on jealously, but what they demonstrated again is that they have the songs, the stage presence, personality and technical ability to transform what they created in a studio into a live set that delivers on all the promises made first by the singles and more recently by the album.

Both bands had thrown down a fairly tough gauntlet for The Heartbreaks to pick up. Although we're in Leeds, it feels like half the crowd has been bussed in from their hometown of Morecambe as there's no booing when they proudly announce their Lancastrian roots and gently rib the fortunes of the local football team.

Things don't start particularly well.  There are issues with singer Matthew's in-ears which mean he can't hear a lot of what's going on in the first few songs and during second song This Is Not Entertainment, his vocal mic starts to give out, meaning we hear a mix of nothing, a crackling sound that distorts his vocals and the occasional word when he holds the cord in the right place.

It feels unsettling for a little while as a man climbs over the stage during the next couple of songs whilst they're playing trying to fix the issues, but once all is resolved, they quickly regain control and build the momentum of their set and by the end everyone's too busy dancing and singing along to remember the inauspicious start. 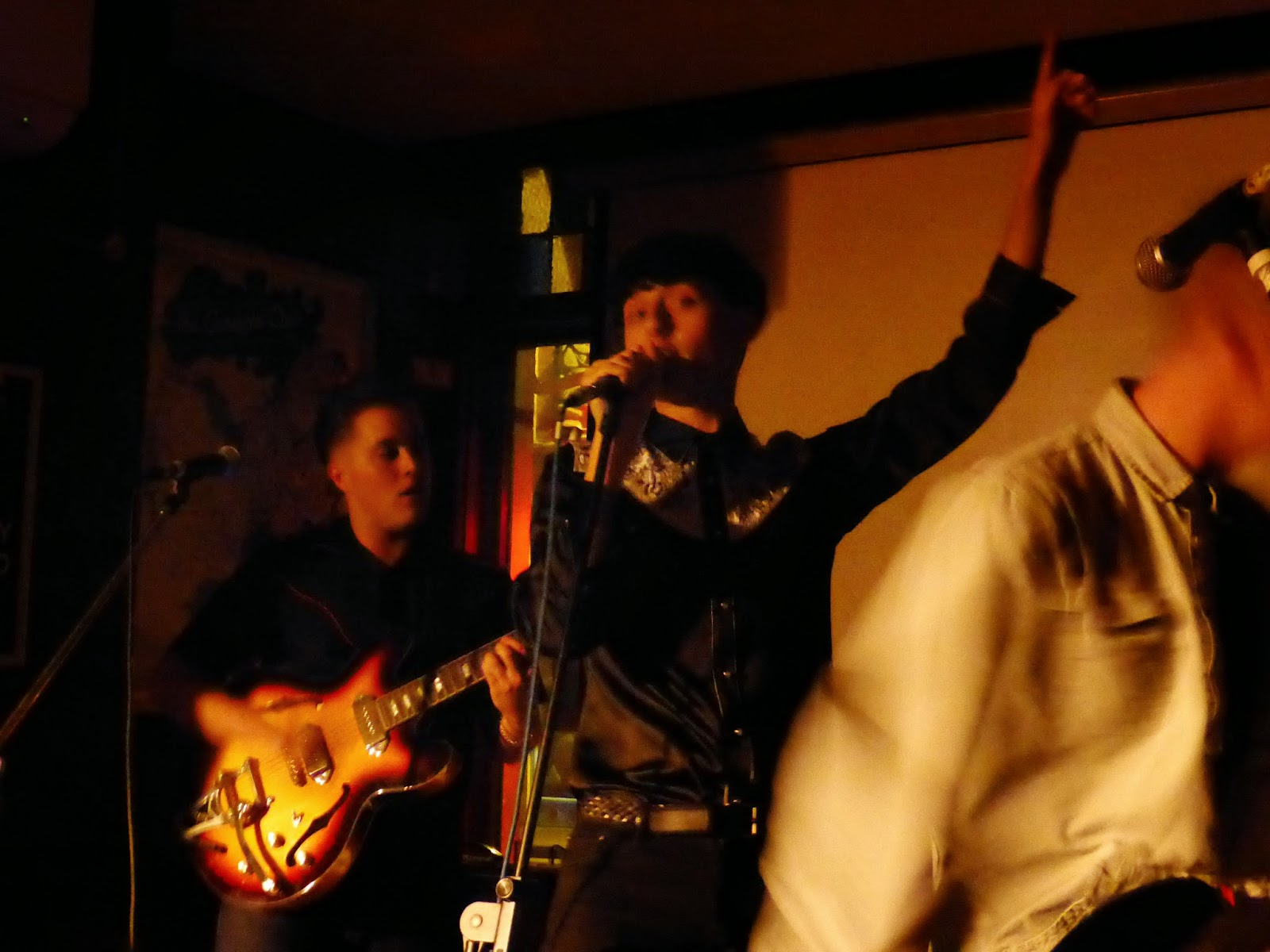 The beauty of The Heartbreaks is the way they fuse intelligent, slightly off-kilter lyrics with wonderful harmonies.  It's not difficult to see why Morrissey fell in love with them back in 2011 and invited them out on tour and they tip a nod to previous collaborator Edwyn Collins with a snatch of Rip It Up.  They tell tales of life in Northern towns hued with a dewy-eyed optimism coupled with a tinge of reality, of love found and lost, all through the eyes of someone who just doesn't quite fit in.

When the rest of the band join in on backing vocals the songs get a lift that it's impossible not to fall for and finally, as the set builds to its climax with the likes of Jealous Don't You Know, Save Our Souls, Delay, Absolved and early single I Didn't Think It Would Hurt To Think Of You, you have to reflect that with such an armoury of great pop songs that they should have, could have been and may yet still be, with a fair wind and a bit of karma, properly recognised as genuine flag-bearers in the twenty-first century for this much-loved very British style of musical romanticism.

Email ThisBlogThis!Share to TwitterShare to FacebookShare to Pinterest
Labels: High Hazels, The Blueprints, The Heartbreaks