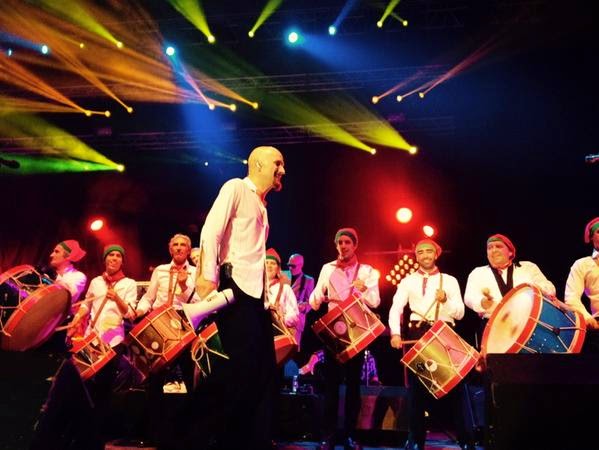 James opened their short two-date tour of Portugal with a sold out show at the Multiusos de Guimaraes and a nod to the local Pinheiro festival as well as tracks from their 2014 La Petite Mort alongside back catalogue classics.


Tonight’s 5,000 capacity show is sold-out, testament to the popularity of James in Portugal.    Guimaraes is a city of 150,000 people – equivalent to the size of Canterbury to put that into perspective, although the queues of cars still outside the venue an hour after James left the stage suggests that the crowd came from far and wide to pay homage to their unlikely heroes.

They open with Walk Like You, the opening song from La Petite Mort, and the Portuguese fans break into clapping, some of them not stopping from the opening bars of this right through to the close of Sometimes.  It’s a song built for big halls like this, the big bold sound contrasting with the parental advice to a child in the lyrics.  Frozen Britain has a similar feel, its opening chords unmistakable and with enough room in the song for Tim to dance, and there’s an element of the crowd tonight that are fixated on his every move so there’s a mid-song roar when he starts. 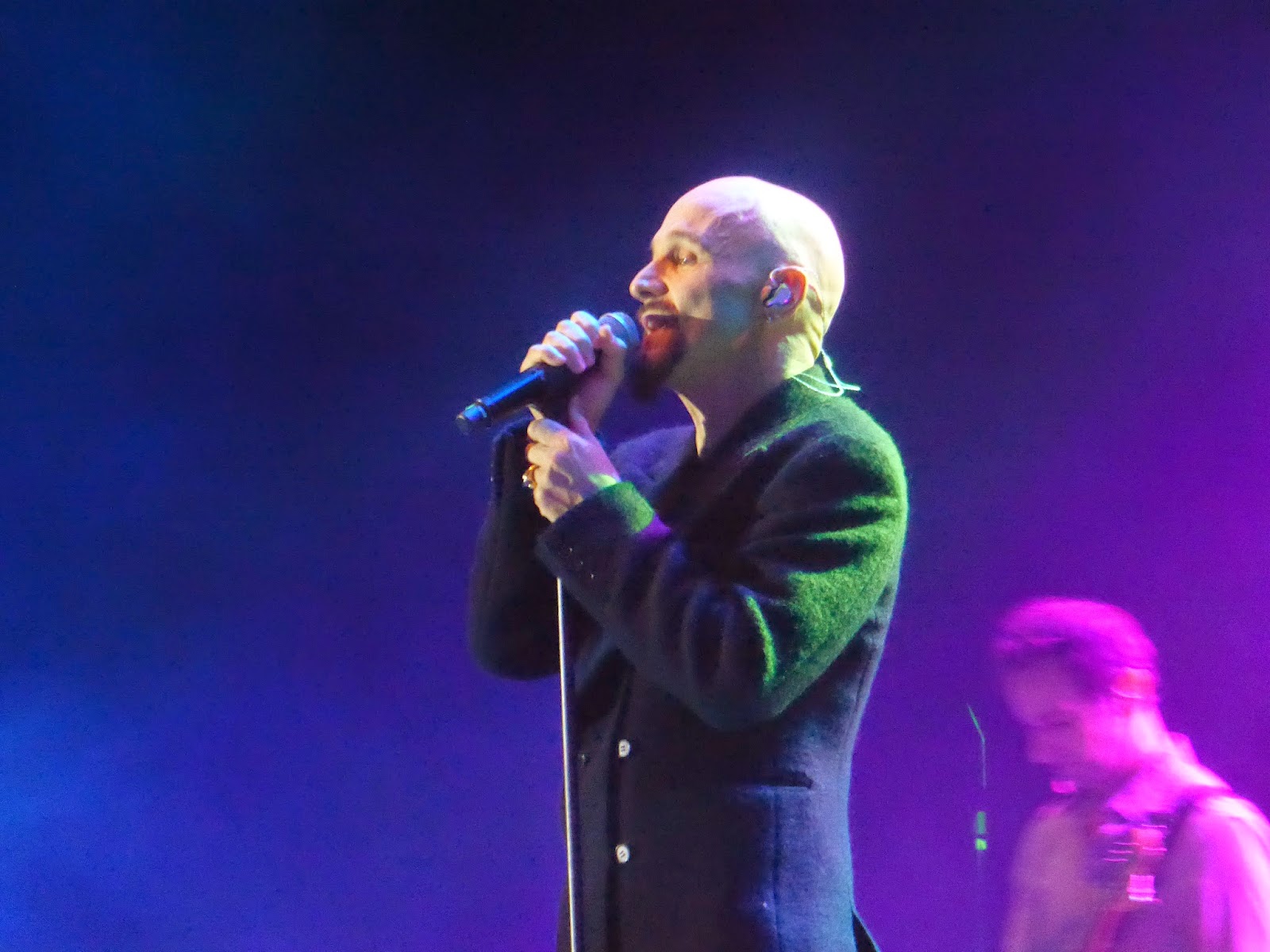 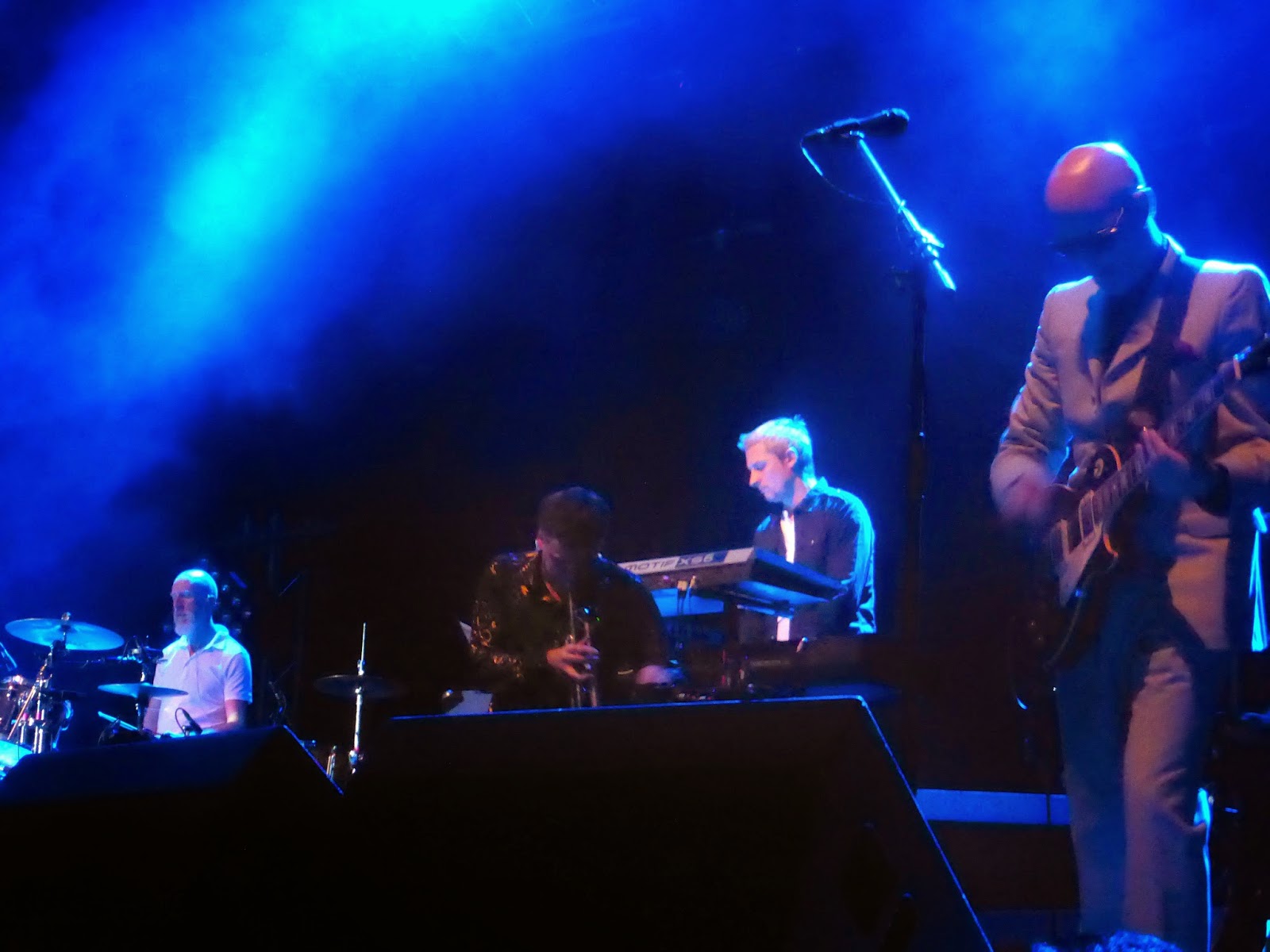 Perhaps due to the height of the stage creating a sense of distance that needs blowing away, Tim ventures down into the pit and then into the seats that flank the arena, perching precariously on a barrier, for Seven.  Whilst Sometimes and Laid were what cemented Portugal’s love of James, it was with Seven that they first toured here and it’s these songs that get the best reactions tonight.

Next up are Curse Curse and Laid, perfectly matched together.  Whilst Curse Curse gets a fantastic reception in its own right, the sea of arms stretching way back into the venue, it’s Laid that sends the place completely bonkers. It’s like watching a reverse Poznan as everyone in the building bounces and bounces, singing along to every word.

She’s A Star gets the difficult job of following that, but it’s a song that’s struck deep into the psyche of the audience here.  All Good Boys, a Millionaires b-side that didn’t even make the Ultra b-sides album, is next and works beautifully.  The Portuguese audience, unlike a majority of their UK counterparts, stand and listen to a song few of them probably know.

Just Like Fred Astaire sees Tim make his way down to the barrier and then start walking on the shoulders of the crowd, all without dropping a word.  It’s made a welcome resurrection in the set on this tour – its subject matter, a man falling in love, isn’t traditional James lyric territory, but it strikes a real chord here.  At the end of the song Tim falls backwards and is carried on a sea of arms back to the front.  Tim jokes about the reaction he got going into the crowd in Glasgow and the contrast to how well the audience looked after him.

They then divert to Greenpeace, which builds to a wall of noise and light as it reaches its conclusion as Tim’s two-mic approach tells two sides of the story of environmental ruin.  It contrasts with PS, a gorgeous ballad musically that finishes in a delicious Saul violin solo that stuns the crowd.
The whole place goes wild again for Getting Away With It (All Messed Up), a song that seems to have particular resonance in continental Europe as it never fails to get a euphoric reaction.  It’s probably coming to its time to take a rotation out of the set, but you absolutely cannot deny the power it has to get an audience going.  Tim doesn’t need to sing the first verse because it’s sung to him whether he likes it or not. 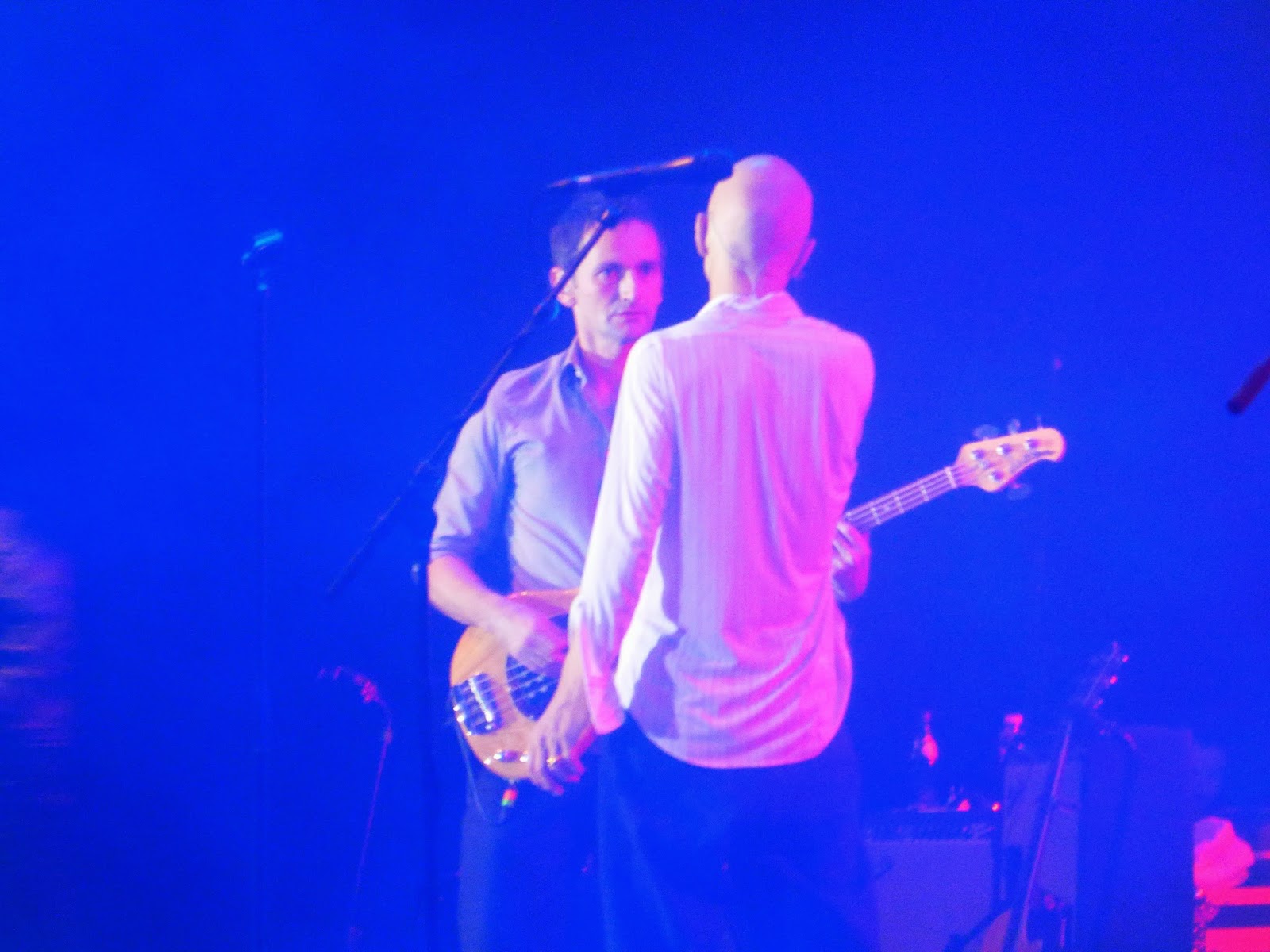 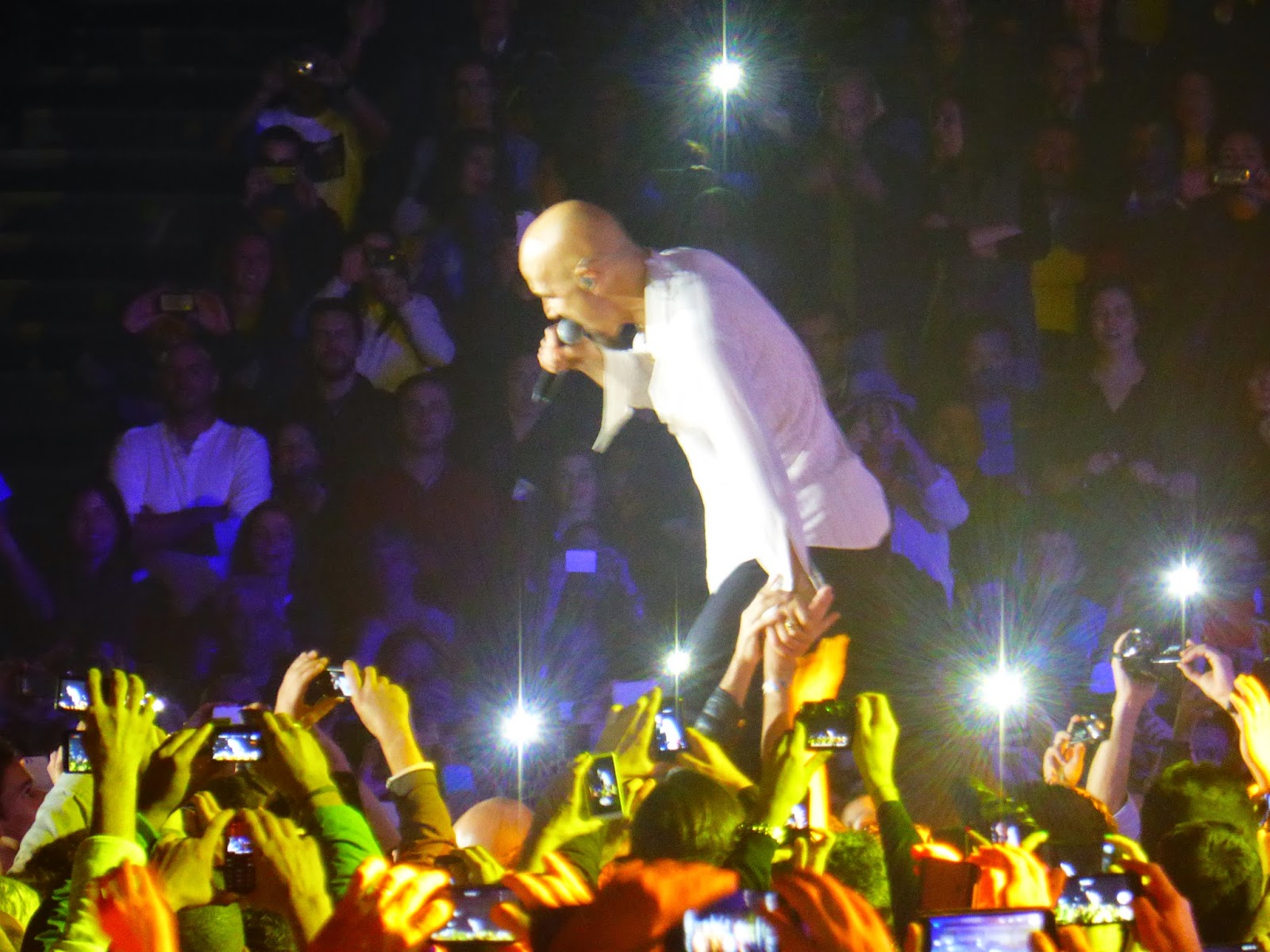 Moving On is the one of the new songs that has made the most impact due to its subject matter and its video and we were told earlier that it’s the song that Portuguese radio picked up on of all the singles so far.  The venue becomes a sea of arms as far back as you can see.  Gone Baby Gone sees dancers invited up from the crowd on to the stage as has become tradition and its stop-start staccato vibe has everyone dancing as Tim prowls the stage looking for people to dance with.

Sound is next and has a twist.  As it reaches the breakdown session, thirty drummers in traditional  costume march on stage playing the same beat.  November 29th is the start of a two week celebration in Guimaraes which starts with an all-night party to which the soundtrack is the Nicolinos (as the drummers are called) and this beat.  Somehow, despite about ten minutes soundcheck, it works beautifully, James improvising around the beat.  As the song reaches its conclusion, five thousand people holler the “mah bah ooh” refrain back at the band, before they allow the drummers their own minute or so in the spotlight, paying respect to local tradition that the crowd react ecstatically to.  The sound on stage is matched by that of stamping feet, both on the arena floor and in the raised seating.

Come Home finishes the main set and almost feels like the interloper at the party with what’s gone before it, partly as it doesn’t occupy the same heady place in the James canon of songs here than it does back, but mainly because there’s just been one of the moments you get at some James gigs that you can’t follow.
Andy appears on the balcony at the top of the seats for the start of Born Of Frustration and Tim sings most of it in the seats on the opposite side as the Portuguese crowd ape his Indian cry.  Interrogation is bold and powerful, exploding at the point the verdict of the song is delivered.  This type of song (see also I Wanna Go Home and Of Monsters And Heroes And Men) characterize the reunion of James more than most in that they give the band space and room to take them off at tangents whilst retaining control.

Stutter sees another set of drummers on stage, this time less traditional and more fluid in their approach.  The crowd look on with a slight sense of bemusement at the carnage that unfolds on stage.  It’s a song that’s been there since the start of James and Tim explains the story about how it’s when his tongue took control of a situation when he was pursuing a girl at University and when she finally succumbed he talked his way out of it. It’s a song that has grown with the band as they’ve developed and one that has always found its way back into their sets.  Tonight it’s a rampant sprawling beast, backed up by a light show that almost blinds you but which changes in time with the music (no mean feat given the pace of the song), the additional drummers adding to both the aural and visual chaos.  Larry adds a new rougher intro to the song as Tim stands inches away from him, encouraging him to take it to new places and then later he does the same with Jim.

They decide to forego the second encore ritual and play Out To Get You. Again, they’re almost drowned out by the sound of the audience clapping along, although they do shut up when Saul’s jaw-dropping violin solo takes charge as Tim retreats to the drum riser to let the rest of them take centre stage.

Sometimes is the inevitable yet completely appropriate conclusion to the evening’s events.  It’s the song most synonymous with James here.  The crowd sing along then as it reaches its conclusion, they take up the refrain and then Saul kicks in with a fierce guitar as the others move to bid their farewells sending them back for an improvised outro, again very different to other nights, before finally bringing things to an end, with the audience streaming out afterwards still singing along.

There’s a very special connection between James and Portugal, one that’s very hard to pinpoint.  But they are both incredibly passionate people, seen as the underdog but possessing a natural talent and love of life that they harness for them to live their life the way they choose rather than the way others would want to dictate to them, and when you look at it that way, it feels like the most natural bond you could imagine.

James played Walk Like You, Frozen Britain, Seven, Curse Curse, Laid, She’s A Star, All Good Boys, Just Like Fred Astaire, Greenpeace, PS, Getting Away With It (All Messed Up), Moving On, Gone Baby Gone, Sound, Come Home, Born Of Frustration, Interrogation, Stutter, Out To Get You and Sometimes.