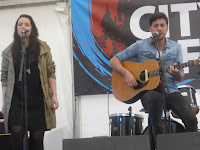 One of the benefits of Manchester's Food And Drink Festival is the opportunity it affords to catch free live music in the tent on Albert Square and for local artists and bands to get the exposure of a gig to an audience that doesn't know them. We caught Dave Fidler with his four-piece band The Corvettes playing a folk and country-tinged set to an appreciative crowd sheltering from the Manchester rain.

As well as his growing solo career, Dave Fidler has his hand in a lot of musical pies, one of which is the five-piece band Dave Fidler and The Corvettes. Mixing tracks from his solo album I'm Not Here revamped for this expanded treatment as well as other songs that weren't included on the album, it's an interesting mix of songs that show the quality and the versatility of his song-writing as well as allowing his band mates to show off their not inconsiderable skills.

The band includes Jenni James on vocals and the interaction between the two of them is a joy to behold and Jenni also gets the opportunity to lead on her own in parts, particularly on a fantastic cover of Fleetwood Mac's Rhiannon. It's a bit of family affair with Debs Fidler on a range of instruments from glockenspiel, mandolin, harmonica, banjo and ukulele and Becky on keyboards. The line-up is finished off by Frankie Ball on violin. 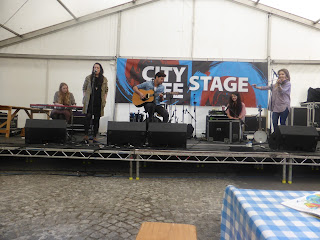 As well as Easy Gone Easy Come and Reassured from I'm Not Here, the set features some songs that might hopefully form a strong basis for the follow-up or a release with The Corvettes. You And Me, Work Of Art, Go To Sleep and Love Listens are beautiful longing love songs that work perfectly with the lilting violins, the chime of the glock or the pluck of the mandolin and the combination of vocals. The latter is described as a song about the state of the world and the "money talks but love listens" of the chorus felt very apt given the political events of the day. Covering Rhiannon could be seen as a bit of a cliche, but the way it's delivered dismisses any such notion - respect for the original, but with Jenni adding her own style to it despite her modest claim she needed to rehearse it more.

Whilst Dave seems to be focusing on his solo career as the never-ending John Bramwell tour is kicking back up again soon and playing in his wife Lily-Jo's band, it's to be hoped that he doesn't forget The Corvettes as together they put a very different slant on those songs he's charmed us with on his own.

Dave Fidler's website can be found here and the single and his album I'm Not Here can be purchased on CD and vinyl from there.  He is also on Twitter and Facebook.

Email ThisBlogThis!Share to TwitterShare to FacebookShare to Pinterest
Labels: Dave Fidler, Dave Fidler And The Corvettes