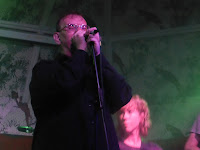 Always one of Manchester's dark horses, Dub Sex reformed a couple of years ago and have played sporadic gigs around town and further afield. On Sunday they played an eight-song set early in proceedings at the People Over Borders fundraiser at the Deaf Institute.

Underrated and underappreciated in their time, Dub Sex were always perceived as poor cousins of some of the city's more celebrated names, which was patent nonsense and it feels like this comeback has aimed at finally getting some recognition for them as well as simply enjoying the kick they get from playing together again. Their line up has changed, front man Mark Hoyle's son Stefan has now taken over on guitar and Kevin Clark on drums, but the core of Mark on vocals, Cathy Brooks on bass and Chris Bridgett on guitar is still in place.

Since getting back together they've played a series of triumphant headline sets as well as supporting Inspiral Carpets and performing at Festival No 6 earlier this month. The welcome they've received has urged them on to continue and tonight's crowd is small, due to the nature of the event, but enthusiastic as they run through a short set of most of their best known songs.  The songs are dark imposing monolithic structures still and Mark's voice, whilst not a classic singing voice, is jagged, on edge, half sung, half shouted with a tonne of reverb applied and perfect for the mood and threatening undercurrent to the songs that his band mates create round him. He breaks out sporadically into his own unique form of dance that feels somewhat fitting in with the tight, staccato rhythm and grooves that's being created around him. 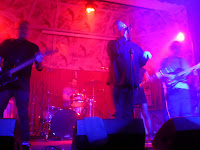 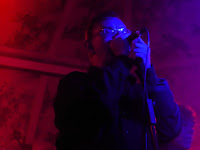 For a band that has a very defined sound, there's a surprising depth and diversity in the songs that they play and that's testament to the way the band have gelled together and brought the songs right up to date in a way The Fall, a band they're often compared unfairly and unfavourably with, have generally failed to do so. Push and Caved In feel thoroughly modern albeit without losing touch with the time in which they were created. They finish with possibly their two best-known songs Swerve and Tripwire and the assembled crowd give them a rapturous send off.

Dub Sex played Instead Of Flowers, The Underneath, Push, Man On The Inside, Caved In, Time Of Life, Swerve and Tripwire.