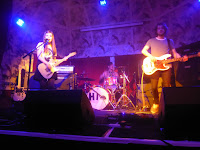 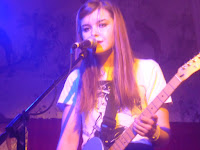 False Advertising are a band full of contrasts. They swap lead vocals half way through the set between Chris and Jen who also swap from guitar to drums and vice versa. Their songs mix a love of grunge with some moments of sweeter pop to great effect and despite only surfacing this year are already an accomplished live band.

Chris takes on lead vocals and guitar duties for the first three songs, whilst Jen accompanies him on drums and backing vocals and bass player Josh does this thing, aloofly cool from it all. They start off with I Don't Know and the great thing we immediately recognise about False Advertising is that they've taken the unusual route of announcing themselves with an album they've spent time perfecting before playing a load of live shows. That means they're not still learning their craft and the songs in front of us. 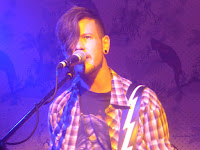 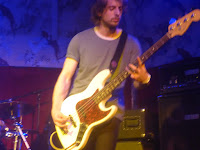 After third song No Good they swap positions and Jen takes centre stage. We caught Wolf Alice, who are playing the Albert Hall up the road tonight, here two years ago at Dot To Dot and Jen has that compelling stage presence and intensity and potential star quality we saw in Ellie that night when she's in the lead position. False Advertising are a bit darker and their grunge fixation is never too far from the surface even on the likes of album closer Something Better and set closer Dozer, but this is a good thing especially as Jen and Chris's vocals interweave.

Even so early in the evening (they're on second of a four-band Skinny Magazine bill), they get and deserve a great response from the crowd. False Advertising aren't afraid to nod to their influences but impose their own personality and style on them.