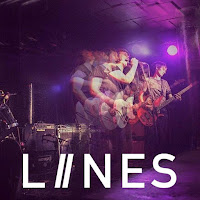 It's been a relatively quiet year for Manchester three-piece LIINES. Or it would seem so given their rare appearances in town, but they've been on the road in Europe where they've build up quite a following with their full-on punk / grunge assault on the senses. They're returning with a few hometown shows including a free one at The Royal Oak in Chorlton tonight and have revealed a live video of Blackout recorded in Austria earlier this year.

The grainy live video for Blackout filmed by Anatol in Linz in April captures perfectly their sound, loud, raw and in your face like no other band in town at the moment. Their live set is crammed full of sub three minute assaults on the senses, each one channeling together drums, guitar and bass to create something bigger and more ferocious than the sum of their parts. They've got three shows announced for the next few months and we highly recommend catching one (or more) of them.