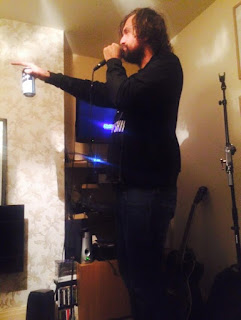 As part of the promotional campaign for their forthcoming album Mirrors, Jon McClure, frontman of Reverend And The Makers is doing a social media inspired tour of the country showing the accompanying film to the album that was filmed in Cuba as well as playing a few acoustic songs. Our friend Abi Richardson was lucky enough to convince him to come to her house in Timperley. Here's our report of the evening's events.

There's a sense of anticipation as it approaches half past nine and twenty five of us are crammed into a suburban semi in Timperley - home of Frank Sidebottom - as Jon, aka The Rev, pulls up, grabs his guitar from the car and strides into the house. He immediately charms everyone with his down-to-earth no nonsense Northern charm.

First of all he plays us the DVD that accompanies the deluxe version of their Mirrors album that comes out at the start of October. Mirrors is a significant departure from their previous two albums @reverend_makers and Thirty Two and a potential album of the year contender on first listen. Whilst it still possess Jon's intuitive feel for melody and an insightful lyric, whether it be about love, life or politics, the electronic sound that characterised the likes of Bassline, Out Of The Shadows and Devil Roof is replaced by a harder guitar-edge in parts on tracks such as Black Widow, Making Babies and set-closer Lay Me Down. There's also a softer more reflective slant on the beautiful The Beach And The Sea, the acoustic-driven Blue, the lovestruck My Mirror where he shares vocals with wife Laura and the simple but emotion-laden Ed Cosens Last To Know.

Whilst the concept of the DVD - basically creating a movie that the album soundtracks - could end up being a real mess in the wrong hands - it works perfectly. It feels like the band and producer Roger Sargent have perfectly captured the mood of the record, from starting with Jon riding a motorcycle from the airport at the start to the journey back during Lay Me Down taking a journey on water, through the animated video of Making Babies that strikes a chord with the struggle of refugees and the hilarious Mexican standoff of El Cabrera.

Before Jon's set he asks if anyone in the audience is in a band and wants to do a couple of songs, something that he's done constantly over the years, supporting new artists, people who feels have a message to impart, who need support that the industry wouldn't necessary give them because they don't fit a specific mould. 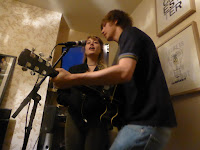 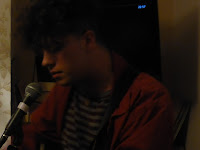 So we're treated to two songs from Katie and Kieran, a young couple, the first being a cover of The Quarrymen's In Spite Of All The Danger where their harmonies intertwine perfectly before Katie delivers an absolutely spine-tingling vocal performance of Elvis Presley's Heartbreak Hotel. Next up, Isaac of No Hot Ashes steps up with two fierce acoustic solo renditions of his band's tracks Skank and Goose - versions so intense and raw that they cast the originals in a new light. 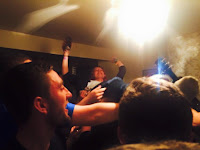 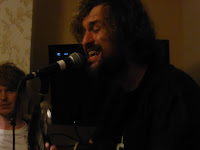 And then it's Jon's turn. Immense personable as ever even in such intimate surroundings where he's one move the wrong way from taking out one of us, or worse knocking one of the Mancsy prints behind him off the straight, with his guitar head. He starts with one of the songs so loved at his outdoor post-gig sojourns - a cover of the Dandy Livingstone song made famous by The Specials. He implores us to sing the trumpet part, louder every time and god knows what the neighbours are thinking as it gets louder every time as the song progresses. Next up is Heavyweight Champion Of The World and, just like the gigs at the Ritz and Sheffield Academy, it's as much about the crowd and our participation as it is about Jon, such is his humility and his wish to engage everyone in what's going on in the room. He chides us for not singing loud enough, moves into the middle of us endangering the lampshade as he does.

Jon tells us plenty of stories as the set proceeds such as his Dad telling him he was conceived to a Barry White record and it's not been so sweaty in this room since organiser Abi was a twinkle in her parents' eye as well as reading poems about Henderson's Relish and Bad Gak from his forthcoming book The Lyrics And Poetry Of Jon McClure which also includes a drawing of snooker player Dennis Taylor by Horace Panter of The Specials.

The set is focused around the Makers' first two records which are more suited to an acoustic treatment and of course audience participation at the end. Sex With The Ex and Open Up Your Window sum everything that makes Rev so popular - these are simple songs with no pretension, no attempt at making an artistic statement - people love them because he talks plainly and with a wicked sense of humour and self-parody about real situations that the working class of the North can relate to because he's lived those stories just like us.

We sing the trumpet part of Silence Is Talking as tunelessly as thousands do in the bigger halls of the land, but in this suburban living room our ability to hit the right note or to come in at the right time is irrelevant because this is about something more than music. Even the darker No Soap In A Dirty War with its "I don't wanna die in the same hole I was born" has that euphoric positivity behind it, whilst the stripped-down acoustic Devil's Radio encourages more singing along to the "whyyyyy" section and more chiding and a mid-song stop when he thinks he spots a menu for a kebab shop called Wonderwall. 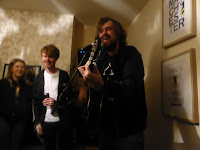 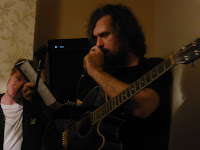 He finishes as he started with A Message To You Rudy and we witness the surreal situation of Abi crowdsurfing in the living room she grew up in as everyone does their best trumpet impersonation. It's all ever so slightly surreal - a man with a top ten album and three further top twenty ones rocking up in his car and playing a gig then chatting away like old mates in the garden and kitchen, recommending songs for Katie and Kieran to listen to and sing, dispensing advice to Isaac, giving his views on the new X Radio set-up, telling us why dogs are better than cats, enthusing about The Sherlocks and how he wants to produce their debut album as well as showing us all photos of his young baby back home.

Rock stars don't do this, but Jon isn't your ordinary rock star, he's one of us, but with possibly the best job in the world and his feet firmly on the ground, doing this for a love of music and the impression it leaves on people.

The album - in a variety of signed formats - as well as extras including a book of Jon's lyrics and signed lyrics sheets can be ordered from their Pledge Music page.