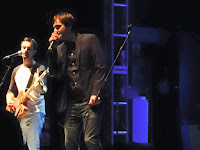 The Bluetones are back and we crossed the Pennines for their first show in four years on the opening night of their comeback tour at Leeds Academy where they reminded us all that they’re a band with a legacy of great singles stretching back through the heady days of mid 1990s Britpop and beyond through the subsequent comedown and backlash.


You sense The Bluetones got it all wrong somewhere along the way. When Slight Return hit number 2 in 1996 and their debut album Expecting To Fly displaced Oasis’ What’s The Story Morning Glory from the top of the charts they were set for huge things. Their subsequent singles from the next three albums made them perennial visitors to the Top Of The Pops studios but they never really replicated the success of that first record. Whilst their (mostly inferior) contemporaries rode on the wave of TFI Friday, splitting up and coming back, they ploughed their furrow with ever decreasing (commercial) returns with a self-titled album and their final record A New Athens before splitting in 2011, ironically on the wave of a sell-out tour when people actually realised what a great band they’d been ignoring and were going to miss.

From the very first notes of their first chart single Are You Blue Or Are You Blind? through to the closing audience-sung refrain of If, the song that’s closed every Bluetones show I’ve seen since 1997, what tonight reminds us of is their unerring ability to create perfect alternative pop songs that hit the mark every single time. It is predictably a set focused around those songs that soundtracked the forty-something audience’s university and subsequent years before they were saddled with mortgage, marriage and children.

Whilst the audience might not have aged so gracefully, the songs’ timeless qualities and the band themselves have. Like so many of the band that survived the fallout of Britpop their best work came later – their career high and vastly under-rated album Luxembourg spawned their best song the spitting bitter Never Going Nowhere, the spunky indie-punk of singles collection focus track After Hours a dewy-eyed flashback to romantic memories of pub lock-ins and the title track of their criminally ignored final album showed they still had it in them to produce melodies and harmonies to melt the coldest of hearts.

The biggest cheers are of course reserved for the big hitters – Bluetonic, Slight Return, Solomon Bites The Worm, Marblehead Johnson and Keep The Home Fires Burning – but the quality of the songs never drops throughout even when they veer from the path of singles to the poignant Tiger Lily and fan favourites The Fountainhead and Expecting To Fly’s closing track Putting Out Fires which brings the main part of the set to a close. 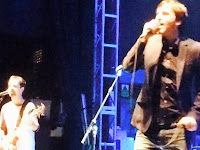 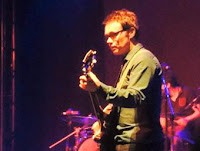 It’d be easy but wrong to dismiss The Bluetones as simply a pop act though. Guitarist Adam Devlin doesn’t have the flamboyant moves of more celebrated and less talented contemporaries but when he takes centre stage in the breakdown of Bluetonic for example he has few peers, whilst the vocal interplay between the Morriss brothers lifts songs out of the ordinary and makes them special.

There’s the usual tomfoolery, references to Savile and DLT, Mark’s insistence on introducing each songs by telling us what key it’s in as well as a faux false start to Slight Return with a bit of self-parody that this is the only song we’re there for that make them even more charming.

There’s no pretence that this tour is about anything than stoking old memories, there are no plans afoot (or none that have been announced) to record new material, but that doesn’t matter to any of the 1,500 or so in the Academy. This tour is about reacquainting yourself with old friends, dusting down your old records and singing along to some of the finest crafted indie pop of the last two decades. And as ever, The Bluetones delivered exactly what you would expect of them.

The Bluetones play the following dates :