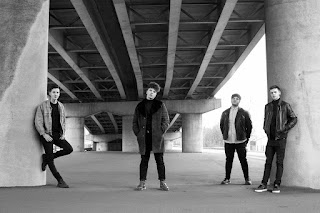 No Hot Ashes have been steadily building themselves a reputation in Manchester as a thrilling live band with their funk-inspired sound, as evidenced on recent double A-side single Easy Peeler / Smooth (No Bits) and a number of sell-out shows as well as festival slots. We caught up with them to take stock of what's happened to them this year and see what their plans for the future are.

Can you introduce the band please?

And tell us a little bit about how you got together and where the name came from.

Matt: With the current line-up we've been together for about 2 years now – the name was an off/on thing which started before we formed the band properly – we saw it on the side of a wheelie bin.

How do you write your songs - is it a collective effort or do you have a main songwriter?

Isaac: Writing usually starts with me or Lui coming up with a chord/melody idea we like on guitar and from there we take it the practice room. To be honest it's a full band effort – we all like to chip in and change things until its crafted into a tune we can really go forward with – me and Matt are really good at getting the structure of the songs dead tight so that's usually how we go about writing more often than not. In terms of lyrics I am the songwriter so all the words are down to me.

Your new single Easy Peeler, could you give us an insight into what the song is about?

Lui: Yeah, Easy Peeler is the follow up to our last single Goose which really knocked us up a few steps after we released it. We went back into the studio with Gavin Monaghan in August and decided to record another 2 tracks – we planned it to be a Single/B-side but after hearing both tracks we couldn’t decide between so released them as a double-A side single.

Easy Peeler is a really funky track, it's similar in feel to Goose but with a bit more depth and dynamics to it. Smooth (No Bits) on the other hand is slightly slower but heavier track bass driven track which was a slight change in direction for us but still keeping the funk element.

You've recorded your two singles with Gavin Monaghan.  How was that experience working with a well-known and respected producer with such an impressive CV?

Jack: Yeah, working with Gavin has been great – we are really lucky to be working with such an experienced guy so early in our careers. He's really produced our sound and been able to help us develop it in so many ways. We spent 2 days at his Magic Garden Studios in Wolverhampton recording both the singles - a really cool studio with a great vibe.

You've very quickly gone from opening bills to headlining and selling out places like Kraak.  Are you surprised by the positive reaction you've had?

Isaac: 2015 has been a big step up for us – we started the year being branded by Fred Perry Subculture as one of the top 20 bands in Manchester to look out for and we've gone from strength to strength as the year has gone on. We got announced for 2 massive festivals (Kendal Calling and Tramlines) and since then the buzz around us has got bigger.


To celebrate the release of Easy Peeler we put on our own night at the Kraak Gallery which sold out with over a week till the gig which we were very proud of. The night was mad – we packed out the place and the crowd was mental – things got pretty rowdy towards the end of our set – we loved it.

What are your plans for the rest of the year and 2016 - are you going to record more and get out and play some shows outside of Manchester?

Lui: Well at the moment we're back into writing mode and trying to get a few new ideas on the go – over the next few months we have some good gigs we are looking forward too including 2 support slots for upcoming bands The Amazons and Dexters who are both on their UK tours.

We'll be playing in Leeds, Preston & Manchester over the next few months but we really enjoy playing outside of Manc and getting out to a new city so we'll probably aim to push that. Looking at 2016 we probably are going get back into the studio as soon as the tunes are ready – there was a good year gap between Goose and Easy Peeler which felt too long so we want to be releasing some new tracks in early to mid 2016.

If you had to describe No Hot Ashes's sound to someone who'd never heard you before, where would you start?

A fuse of indie, filth, funk and dance.

Easy Peeler / Smooth (No Bits) is out now and can be bought on CD from their shop or digitally from  iTunes.

Email ThisBlogThis!Share to TwitterShare to FacebookShare to Pinterest
Labels: No Hot Ashes