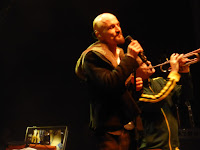 Entering the last weekend of their festival season, James had been invited back to headline the Friday night of Bingley Music Live by popular local demand. Their set featured a selection of their greatest hits as well as tracks from last year's La Petite Mort album and there was an unfamiliar face on guitar.

Bingley Music Live is a curio in the music festival circuit. Supported by the local council, a rarity in these times shrouded under the cloud of austerity, it effectively takes over a picturesque park in the centre of a Yorkshire market town for a weekend. Tickets are kept ridiculously cheap at £49 for three days of established and up-and-coming bands and it's got a family-friendly atmosphere as evidenced by the number of young faces in the crowd with and without their parents. There's the ubiquitous folded chair brigade as well as the organisers somehow deem them less dangerous a weapon than an umbrella.

James are preceded by The Beat who bring back memories of the 1980s and get young and old dancing whilst Cast plod their way through their catalogue of sub-standard Britpop dirge unable to shake off the impression that they somehow conned us all by recycling a La's b-side for a decade. But as night starts to fall, the band most people are here to see make their way to the stage.

"Hi hooligans" shouts Saul as he bounds on to the stage, perhaps not a wise call after the violent incidents in the crowd recently in Edinburgh and James' history with the Leeds wrecking crew that adopted them in the 1980s, and they launch in Tomorrow. And it sounds awful. It's not the band's fault, nor is it the professional sound man whose reputation could be ruined by one of these gigs where they've got no time to set up properly and they have to react to the cards they're dealt with. It's so muddy that instruments merge into each other. As they move into Curse Curse, the sound man performs Herculean miracles and manages to knock it into something appropriating shape so that signature keyboard line of Mark's pierces the fog. Tim comes down to the barrier for the first time and goes crowd-surfing without dropping a note. 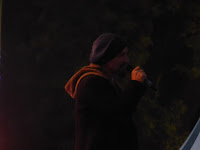 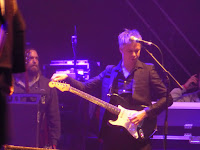 Given that Mike Vennart, who is standing in for the resting Larry Gott, has only had an hour and a half's rehearsal time with the band, it's no surprise that tonight's set is focused towards the greatest hits and two of their biggest follow - Laid and She's A Star. He masters Larry's signature opening guitar salvo in the former and, now we can actually hear him rather than an amorphous mess, it's great to hear that he keeps faith with the originals whilst also adding his own little touches and stamp to Sound and Sometimes later in the set and managing to capture that beautiful intimacy on Out To Get You. Whilst it feels strange seeing someone else up there playing other than Larry (or stand-in for the other shows Adrian who was of course with the band between 1997 and 2001) and weird seeing someone play left-handed in that position, his performance is admirable in the circumstances once we can actually hear what he's playing.

The crowd does drop a little mid-set after a raucous Johnny Yen which sees Tim prowling the stage, encouraging, challenging his band mates, driving them along on a wave of adrenaline fuelled by the love that's coming from the crowd. The less familiar Walk Like You and Interrogation do mean that some decide it's time to chatter, but a fierce proud Out To Get You, characterised by a frankly jaw-dropping violin solo from Saul, in between has Bingley waving their arms and singing back the refrain.

Sound battles hard against the sonic obstacles thrown in its way and emerges victorious at the end if a little battered and bruised. All such concerns are well and truly blown away as Sit Down concludes the main part of the set and everyone joins in unison from the kids down the front to the parents in their chairs on the hillside.

The encore starts with Moving On, a beautifully poignant song that doesn't feel at all out of place around the big hits around it in the set and, judging by the audience's reaction, one that has struck a nerve with most people at some time in their lives. Bingley goes bonkers though as the opening strains of Come Home bounce around the tree-lined park and Tim braves the hordes and their camera phones protuding in his face to dance on the barrier. Fittingly, the evening finishes with a communal singalong of Sometimes, which has become their major anthem these days, the line "sometimes when I look in your eyes I can see you soul" a metaphor for what James' music achieves. 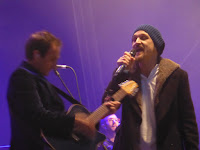 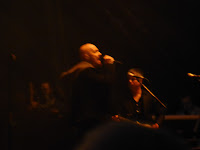 This show ended up in some way being a triumph against the odds. With the excitement of a new album in the final stages of being recorded, the personnel issues in the band this summer and the uncertainty that creates, a guitarist who has never played on stage with them before and has had little rehearsal time and tonight's issues with the sound, James have a lot to contend with. Whilst this wasn't their best gig ever, the thousands of beaming faces as the set concluded and we dispersed into the night says everything you need to know about how this band battles what fate and circumstance throws at it and usually comes out on top.

James played Tomorrow, Curse Curse, Laid, She's A Star, Johnny Yen, Walk Like You, Out To Get You, Interrogation, Sound, Sit Down, Moving On, Come Home and Sometimes.