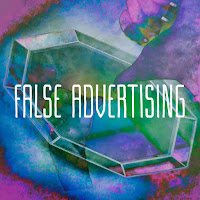 Despite only surfacing live for the first time in April, Manchester trio False Advertising have already recorded their debut self titled album.  Stuart Ralston has a listen and is mightly impressed.

Although (mostly) hailing from Manchester, False Advertising - Jen, Chris and Josh - draw most of their influences from over the other side of the Atlantic, with just a passing nod to the post-punk Manchester scene on this, their debut album. Impressively, they have produced it (and released it) themselves. Their DIY ethic comes across in the music too and to my ear, they are reminiscent of Sebadoh and Drop Nineteens. Like the former, the band members swap instruments with both Jen and Chris sharing drumming, guitar and vocal duties. Josh meanwhile holds down the bass.

Opening with Breaker, Jen takes on vocal duties as the band create a post grunge sound. Another Mention is slightly darker and fuzzed up with touches of The Fall to both the rhythm section and the vocals. Debut single Wasted Away is reminiscent of 6 Music favourites from a few years ago, Yuck.

I Don't Know shows a slightly mellower sound to False Advertising without losing sight of their punk ethic and for me is the pick of the album. On songs like All of the Above, there's an almost pop sensibility about them, yet delivered in their own fuzzed up sonic style. Cold Shoulder has touches of Sister era Sonic Youth.

False Advertising have delivered a confident debut which sets them apart from the current bunch of shoegaze revivalists and we look forward to catching up with them live.