Track Of The Day : Those Handsome Animals - Do Wrong 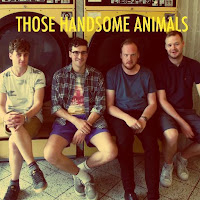 Do Wrong is the lead track from London four-piece Those Handsome Animals' new EP Hits. It was recorded live to tape and captures an infectiously catchy guitar riff combined with a passionate bitter lyric about a relationship break-up.

The email they sent us told us they were influenced by Cars and Status Quo, which was almost enough for us to not even listen to the song, but we're glad we did and there's something about its three minutes that made us hit repeat several times. It's a song that's a bundle of fun and guaranteed to get you tapping your feet along to it (and air guitar if you're so inclined) despite its dark subject matter.

The London-based four-piece are Gavin Hankins on guitar, Thomas D. Millett on guitar and vocals, Thomas Beavis on bass and Gary Batt on percussion. They have the following show scheduled :