The Bluetones - Return To The Last Chance Saloon (Deluxe Edition) 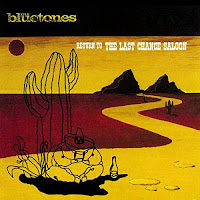 To coincide with their reformation, The Bluetones have reissued their top 10 1998 album Return To The Last Chance Saloon with a host of bonus material. We revisit the album that often lives in the shadows of its predecessor Expecting To Fly and discover a band trying to match the commercial expectations of their label against their own musical instincts.

The Britpop years of the mid 1990s were a very different environment for bands than they are now. Bands were thrust into the upper echelons of the charts very early in their career and were often ill-prepared for their new-found stardom. After a low-key release on Fierce Panda and a couple of minor chart successes, The Bluetones exploded onto the scene with a number two single Slight Return and a number one debut album Expecting To Fly in early 1996 and were one of the hottest properties in the business touring the world on the back of the album.

There’s a reason why a band’s second album is seen as difficult. Unless you’re Noel Gallagher and have years of material stockpiled, your first album is all your best material. The ones that aren’t on the album either got used up as b-sides (remember them? – The Bluetones had an album’s worth of them comparable to Expecting To Fly) or simply weren’t up to the mark.  So when the second album is mooted, the cupboard is often bare and the expectations of the record label and the recently acquired fan base sky high. It’s broken bands before.

Guitarist Adam Devlin’s sleeve notes tell this familiar story, they tried to write on the road and came up with the fan favourite Marblehead Johnson as an intermediate single between albums (remember them?) which is featured as one of the bonus tracks here, but it wasn’t until they convened with Hugh Jones at Rockfield Studios. In the notes, he references the word fun consistently and you can hear that coming through in the record.

Return To The Last Chance Saloon does feel like a reaction to the overnight success of Expecting To Fly. It starts with an instrumental Tone Blooze that must have sent the record company apoplectic as the demand was for big hit singles to cement the band’s success as Britpop was starting to fall apart. The record does feel like a comedown – the shrug of the shoulders of Unpainted Arizona’s chorus line “that’s the way it goes I suppose, but then again, who really knows” setting the scene for what’s the come.

There are of course the big singles that the label demanded. Solomon Bites The Worm has Mark jabbering away in Spanish under the latin-influenced intro but the fun Adam refers to runs through the veins of the song. If is the song that’s stubbornly refuses to budge from the end of every Bluetones live show – its contemplative “sometimes a drink and a smoke and a ponder can work wonders, takes your frown turns it round” is another post-apocalypse reflection before the almost glam rock breakdown and the ascent into the “na na na na” refrain which sends people out of venues singing it nearly two decades later.

The album also spawned two further singles, Sleazy Bed Track, despite its seductive sound, is another song searching for a way out “your pills have cost too much and they're not working anymore so pour them down the sink.” As one of the few bands to survive the inevitable backlash to Britpop relatively unscathed, 4 Day Weekend triumphantly exclaims “the future is dead, that’s what she said, I’m fine, I’m alive”

What makes Return such a great album though is what follows those three singles embedded in the middle of the album. In a world where albums had started their decline from thought out pieces of work that are in the order they’re in for a reason to throwing the singles at the front and the filler and fluff at the end, Return actually gets better the further you get into it.  Whilst UTA which sits in the middle of side one is a little claustrophobic and a bit self-indulgent with sirens blaring in the chorus, side two is an absolute gem.

Jub Jub Bird is a roundabout love song that benefits from the much harder production values employed on Return compared to the debut. Mark contemplates on moving on from a past of jumping from woman to woman with the confession to the subject of the song that “whenever I hear your name, a mist comes down over my eyes” whilst Sky Will Fall has dreamy qualities driven by the collision of Adam’s guitar and Scott’s bass.

Ames sees Adam cranking up the guitar and showing us why he was one of the most under-rated guitarists of his generation. Not one for show which would explain the lack of recognition, his style is more direct and delivers exactly what the song needs as Mark continues his journey through his conscience “maybe I don’t have what it takes to be humble”

Down To The Reservoir is a buoyant upbeat three minute bundle of fun that really should have been a single. It’s one of those classic Bluetones songs that doesn’t take itself too seriously, but a great pop song in the vein of some of their biggest hits that meant they were able to survive the backlash and still be pulling crowds today.

The album concludes with Heard You Were Dead and the fabulous Broken Starr, one of their best tracks ever, and both of these benefit from the harder production values that the band determined necessary after they felt Expecting To Fly had a light touch on it.

The bonus tracks start with The Woman Done Gone Left Me, the bonus track hidden away at the end of Broken Starr on the original version of the album and Marblehead Johnson, the between album single that kept their profile high and which is much beloved within fan circles despite it being one of their weaker singles.

As all the band’s b-sides were collected on the excellent A Rough Outline collection, disc one concludes with each of the band selecting a favourite b-side from the period. Mark chooses I Was A Teenage Jesus, which was, according to the sleeve notes, inexplicably deemed a little bit too throwaway for the record, but which remains one of their most requested songs. Ed plumps for their cover of Hargus Robbins’ I Walked All Night and Scott for The Three Amigos’ Blue Shadows, however it’s Adam who selects the pick of the bunch with a faithful cover of The Left Banke classic Pretty Ballerina.

Disc two features a mix of live and session tracks. There’s two from an August 1996 radio session although both (Electric) Vampire and The Simple Things actually come from Expecting To Fly and two more – 4 Day Weekend and UTA – from a session broadcast in the week of release. UTA sounds much freer and fresher on this version than it does on the recorded album version.

The live tracks come from a BBC Radio 1 broadcast – in the days when that station championed alternative music – from Newcastle Riverside in October 1998 as part of the Sound City festival. The thirteen tracks featured include seven from Return (including proof that they did play Broken Starr) as well as five from Expecting To Fly and the cover of Pretty Ballerina. It showcases The Bluetones as a band whose live sound remained relatively faithful to the recorded versions of the songs, but with

For a difficult second album, Return To The Last Chance Saloon is a success. Although it didn’t reach the commercial heights of Expecting To Fly, only reaching number 10 on the album charts on its release in March 1998, it’s in many ways a superior album, more diverse in its approach without losing any of that quintessential charm and the unerring ear for a tune that attracted so many to the band in the first place. It still has some of those great indie singles that The Bluetones will ultimately be remembered from, but side two in particular marks them down as a cut above the Britpop pack that fell by the wayside when the knives came out.

The Bluetones play the following dates this week :

Return To The Last Chance Saloon deluxe edition is out now and it will be reissued on vinyl in October. Signed copies of the cd are available from the merchandise stall on the tour.