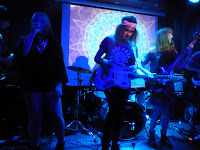 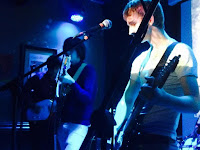 Two of the best new bands in town joined forces for the opening acts of Astral Elevator 6, the latest instalment of what is becoming one of Manchester's best underground gig and club nights. We made our way to a packed Castle to catch up on two bands that can still count the number of shows they've done on their fingers.

First up are Control Of The Going, an exceptionally prolific band in the studio already two assured EPs into their career. With six of them on stage, there's always going to be a lot going on, so much that could get lost in the mix as it did in parts of their last gig at The Yard, but tonight's sound man gets a mix that works perfectly for them and allows the full house to experience their full glory. 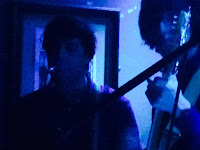 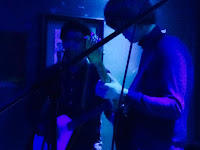 What's so great about them is that they so clearly fit like a hand in glove with so many other bands on the scene at the moment, yet there's something intrinsically unique about them, the way their three guitar and bass set-up combine and collide to create something thrilling and challenging to the listener. Liam's vocal drawl might be an anathema to some, but in that deep rich tone there's shades of Curtis, Cope and a hint of Waits that makes it curiously addictive and incisive in its impact on the audience.

The set is a mix of tracks from the two EPs (Reflection, If Only and The Message from their debut Epilepsy Busride and the title track and In Line from the follow-up Wild Flower), plus three as yet unreleased songs. They open with Bleed For Me, a claustrophobic song that builds and wraps itself around you and doesn't let go as keyboards chime and do battle with those guitars. Step Back is a bit of a departure for them as it trades in more familiar guitar rock territory and features dueling vocals between Liam and Tom whilst Mindless Generation talks of youth "struggling for inspiration" and "trying to find a way out of town with the train stuck at the station" which relates to them growing up in the Tameside town of Denton. As they finish with an extended version of The Message with all six of them lost in the music they're creating and taking the audience with them, you feel they're only a start of a journey. 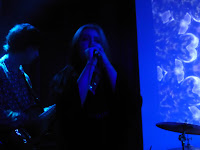 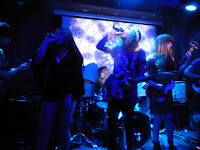 Next up are Freakout Honey and immediately you are struck by the contrast in how they look - the green-haired goth Sofia heading up the band, the head-banded lead guitar Ryan, the effortless French slacker chic of guitarist Camille, the effervescent lost in a world of her own excitement of bassist Natalie for starters. It's this contrast that's also reflected in their music, a real coming together of lots of varied diverse strands into a melting pot out of which comes some of the most organic sounds you'll hear in Manchester, as on the first song where a simple drumbeat provides the perfect backdrop for Sofia's haunting and swirling vocals to entwine themselves around until the guitars come in, the song bursts into life, speeds up threefold before crashing to an end.

This amalgamation of many ideas into one song is a theme throughout their set. Trap Me starts, as many of their songs do, with a long instrumental lead in but then takes us on an horizon-opening journey that varies in pace, direction and impact. There's moments where they sound like crystal clear pop, others dark, threatening and full of foreboding, in parts frenetic and scurrying, but they never lose any forward momentum nor feel like this coming together of so many differing sounds is ever going to unravel.

They finish with the revelatory Cast A Line To Fuck, an eight minute trip with so many staging points it's hard to pin the song down as they lose themselves in the music they're creating with Sofia as their shamanic leader as they release all their inhibitions and submit to their inspired improvisational urges. Whilst this could quite easily become very self-indulgent, it never does as the audience losing themselves in the music and dancing testifies to as the band take the song off to its stratospheric conclusion.  They're only a few gigs in, but there's a feeling that there's something special brewing here.

Email ThisBlogThis!Share to TwitterShare to FacebookShare to Pinterest
Labels: Control Of The Going, Freakout Honey