Dexters - We Paid For Blood 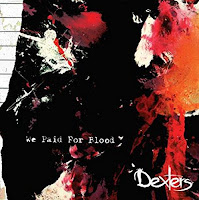 We Paid For Blood is the second album from Dexters. The follow-up to last year’s Shimmer Gold debut album is a heady mix of a band on the outside looking in, analysing their place in the world and putting a big supporting arm around their friends and loved ones. Fast and frenetic in parts, more reflective in others, it’s a bold statement of intent that will delight those who loved the debut, but will also draw in new fans.

The album starts at full throttle with the short sharp Intro which merges into Wolves and it’s evident that Dexters have a love of big dramatic sounds as evidenced by first the drums then the guitar as the song careers through its breakdown section back into the final chorus. They don’t let up on the pace as they free wheel through recent single Stay Strange, a genuine outsider anthem about worrying about losing your identity – Tom musing “we are becoming what we hated” before questioning “are you giving up, are you one of them?” Suburban Sex Dungeon is reminiscent of Reverend And The Makers in the sense that it is a dark social commentary of what goes on beyond closed doors whilst all around Tom his band are building a massive wall of sound.

The album then takes an unexpected turn. The start of Your Lovely Wife is a recording from the studio of Tom asking if the tape is still rolling as if from a scratchy demo but it works in the context of what comes next. The song itself is relatively simple and restrained in its construction, which allows the story of domestic violence to unfold and the wife fighting back by poisoning her husband with the line “open up wide, swallow the cyanide.” It’s so out of character what’s gone before that it makes it even more impactful.

The middle section of the album sees Dexters in more contemplative and understated mood with love floating around in the ether. These Nights For Us with its scuzzed up fuzzy guitars declare that “others may own the days but these nights were made just for us” whilst Borderline makes the solemn declaration that “I’m much better when you’re around”

It’s this subtlety and their mastery of it without ever losing touch with their roots that make Dexters and We Paid For Blood stand out. The title track takes a reflective step back and views the world around it with the observation that “you try your hardest for little in return” and Heaven and His Disappearing Act follow in the same style which allows the band to demonstrate their mastery of creating an impact without turning up the amps to full.

Penultimate track Braggarts Regatta sees Dexters shift back to the adrenalin-fuelled style of the album’s opening track and takes aim at the idea that people can say whatever they want if the “heart’s in the right place”, before You Deserve The World brings the album to a close with a song that’s a heartfelt declaration of admiration that “more people like you is what the world needs” and “we never see your pain, just your courage and conviction.”

We Paid For Blood is the sound of a band doing their growing up in public, starting to answer some of life’s questions and still pondering others. They’ve still got the spirit of youth and the anger and passion that fuelled their debut, and that comes through in both the words and the music, but in most places here it’s used to more controlled and targeted effect. It’s a transition that bands often fail to make, recycling the same formula over and over again in a downward spiral, but Dexters still sound fresh, agitated and have something to tell us.

We Paid For Blood is out now.

Email ThisBlogThis!Share to TwitterShare to FacebookShare to Pinterest
Labels: Dexters