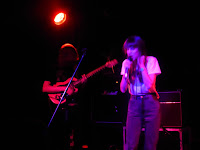 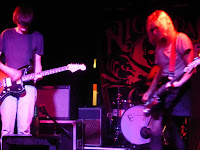 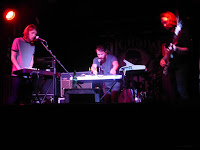 St Petersburg's Pinkshinyultrablast caused a stir after their performance at Salford's Sounds From The Other City earlier in the year and the Night And Day is packed on a Tuesday night for their return and we're not left disappointed by their hard-edged intertwining blend of heavy guitars and light dreamy pop moments. Support came from London trio Fever Dream and Sheffield trio Blossomer.

This is Blossomer's first gig since their guitarist departed and as they line up with three keyboards on stage, it's interesting to see where they go as they've said tonight's show will be a farewell to some songs before they move forward.  They open with their brilliant debut single Foreign Nature and close to the set with the two other songs we've seen videos for - To Adore and To The Sea. By nature of their line up change there's more electronics in the mix - all three have keyboards and assorted effects to play with, but live they maintain the mystery that's pervaded through those singles. They say little other to announce the guitarist's departure, but they don't need to. For a band at a turning point they still impress. 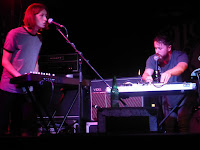 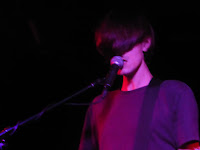 Fever Dream like to play loud and vocalist and guitarist Adey likes to use his effects pedals and blind his eyes with his hair as he sings through the fuzz-heavy sound that they're creating. There's obvious My Bloody Valentine and Mary Chain influences at play, particularly in the way when the foot is taken off the pedal there's crisp chiming melody and rhythm in Sarah's bass and Cat's drums that refuse to bow to the wall of feedback around them. The set is mostly made up of tracks from their album Moyamoya which was released earlier this year, with opening song tonight Seratonin Hit one of the highlights. However, they're already moving on as they finish the set with both tracks from their forthcoming single The Squall and Ghost, the former which concludes in a cacophony of noise as everything stops then is turned up and they let go for one last time.

Pinkshinyultrablast take to the stage to a rapturous reception and it's impressive how many people they've brought out on a Tuesday night, but it's soon evident exactly why. For most of the set song structures don't feel relevant, they do stop at the end of songs, but if they continued on the journey they were taking us, none of us would be the wiser. There's abrupt changes of pace which are both unsettling but feel perfect natural in the context of the band. It feels a little insular at times especially when vocalist Lyubov doesn't face the audience for sections of the show, but as she's lost in delivering an ethereal vocal that flirts excitedly with the swirling intoxicating sounds of her band no one minds too much. 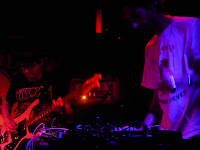 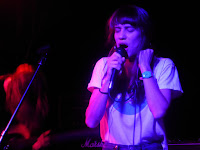 Umi and Holy Forest from their debut album Everything Else Matters gets the warmest response, but as the set develops people start to move, under the spell of the, and we'll use their own descriptions here, mix of dream pop, shoegaze and thunder pop. But they're already moving on and new single Kiddy Pool Dreams sees Lyubov come out of her shell and start to break down some of those walls. The songs, both old and new, throughout have that fluid lucid feel to them that they were created in a world where instinct and chemistry are king rather than structure and form. The reception they get at the end tells its own story.