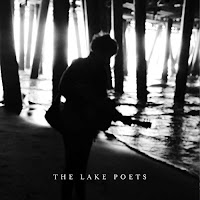 The Lake Poets debut album is a record that explores the darkest parts of the human psyche. Love, loss, domestic violence and reminiscing on a lost childhood and those departed are set against a spindly desolate musical accompaniment to create one of the most intense pieces of music you're ever likely to hear.

The Lake Poets are Martin (Marty) Longstaff and this self-titled album is the cumulation of several years around the North East music scene around his Sunderland base. His 2014 EP Honest Hearts hinted at something special, but didn't prepare us for a record that's almost too difficult, too raw and close to the bone in parts such is the vivid descriptive nature of the subject matter and lyrics and the sparse almost not there instrumentation in large sections of the album.

The very first words of the album set the tone for what's to come. "There are those of us who deal with darkness" could be the album's tag line, but things immediately get darker as Marty tells us a story of domestic violence as seen from a child's perspective, but with a murderous twist that "when I'm older he will not hit you, when I'm older I will watch him die."  Stark, full of intent, it's setting the stall out for the directness that's to follow.

Edinburgh is the one survivor on the album from his previous releases and is a bitter spitting attack on a loved one, it's straight to the point, accusatory and you can hear the venom pour out of the speakers as he accentuates the word "lying" to maximum impact over a hushed backing.

There's a theme of reminiscence running through a number of tracks on the album, a reflective almost resigned acceptance of the past, but not without vitriol and regret. 1996 talks of "the ones you lose are gone forever and that's how it'll stay" as strings dance away in the background.

Friends is another direct targeted attack on someone who's betrayed him - "I've known you a long, long time and you say you're a friend of mine, but you're the malignant kind." It's clear that Marty doesn't forgive and forget easily.

Lead single Your Face is a string-laden volte face on the record. Whilst he can't avoid the subject of missing a loved one "I miss you so much I can't think straight", the song turns around as lush strings usher in the unambigious declaration of love "when I see your face my heart explodes." It feels at last that there might be some happiness in Marty's life at this point and by this point you crack a wry smile for him. See You Tonight follows in a similar vein. More practical in its intent than Your Face but with similar impact as he declares "I want to see you tonight and get lost in your eyes. I promise i will kill all the pain you feel inside."  Maybe the good guys get the girl and the happy ending after all.

Of course, this doesn't last. To The Lighthouse drops back down into misery and regret. A tale of hearing a voice (the lighthouse) in the night from a lost relationship and drinking to forget. As the album progresses the instrumentation plays a more forthright role than the splintered shards earlier on and it builds around him as he laments the lack of direction in his life. North View starts as another tale of loss that's descriptive of the location where the story takes place. Drums and strings kick in, taking the listener by surprise, but which have a strangely uplifting impact as the reminiscences this time, despite sadness, are fond and hark back to happier times.

The next two songs also look back to conversations with loved ones from his childhood. Both are drenched in the hope that he's made them proud. Vane Tempest recalls who we assume to be his father telling him to hold on his dreams and to "be the man he wants to be and there will come a time for people like me and you" as he spreads his wings and goes down to London where the people don't care. Shipyards is also set up in the North East, but from Marty's point of view as he replies to the previous song with the hope "If you could see me now, hope that I'm making you proud." It's a cathartic process of laying his heart bare, as if we've intruded upon a personal exorcism of demons, hopes, fears and regrets.

Orphans brings the album to a close with a  but it closes on a note of cautious optimism "I will see you soon, just give me the strength to see it through."

The Lake Poets is one of the most thoroughly thought-provoking records you're ever likely to hear. It's not an easy listen by any stretch of the imagination such is the raw emotion coursing through it. It's the sound of a man laying bare all those emotions that we all feel at some point in our lives out in front of us. There's multiple heartbreak, betrayal, childhood nightmares, self-doubt and the pain of loss running through it that people are so often afraid to admit to in private yet alone so publicly.

Email ThisBlogThis!Share to TwitterShare to FacebookShare to Pinterest
Labels: The Lake Poets