Track Of The Day 1 : She Drew The Gun - Where I End And You Begin 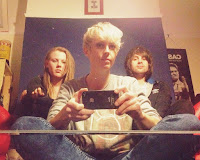 Where I End And You Begin is the third single from She Drew The Gun and her most accomplished so far. A beautiful electronic shuffling beat competes with a hauntingly emotional dismissal of an ex-lover for centre stage. It has us eagerly awaiting a debut album at some point in 2016.

The single follows on from the extremely positive impression she made with debut single If You Could See and its follow up Since You Were Not Mine and has already picked up enthusiastic support from Steve Lamacq.

They describe themselves thus "So the story goes, our heavy hearted songstress, looking to the sky for answers, was met with a message from some future pocket of civilisation. A band of outlaw scientists trying to get their point to some past human, turned storyteller. Her name is Louisa, and she became SDTG, then SDTG became more than she, a circle of friends immersed in the art of music, ready to enter the airwaves." Their live set also includes a couple of unreleased songs that have a biting articulate political stance as well.

We recently caught them play at Manchester Academy 2 - review here