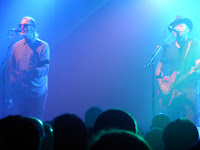 After a series of jubilant triumphant shows in early summer, Ride announced an October tour and speculation was rife whether they would use the tour to revisit their debut album Nowhere, celebrating twenty five years to the day since its release in full. Very late in the day, they announced the shows would feature two sets, the first a mix of songs from across their career and the second the album in full. As there was no Manchester show, us and half the audience got the train over to relive one of the defining indie albums of the early 1990s.

Tonight's first set is a mix of songs from Ride's catalogue subsequent to Nowhere. In fact, of the ten songs played, two are from the between albums EP Today Forever, seven of them came from the follow up Going Blank Again and lastly Like A Daydream from the Play EP that preceded Nowhere. Their final two albums are completely ignored, no surprise to one extent in that they represented a nadir in band relationships and that the strongest memories of the band tend to focus on those two albums, but for new fans discovering them it means we're not covering all bases.

These classic album shows can be a bit hit and miss. Gone is the element of surprise in what's being played and the audience seem to be buoyed up for the album bit and less so for the rest and it's a fairly subdued crowd for the first set to the point even Andy acknowledges it when he asks who attended gigs at the Lomax and Royal Court around the time of the album release. The response doesn't do this part of the show justice though. The long drawn out intro and the cacophony of Leave Them All Behind or Today combined with the hard edged harmonies of Twisterella or Like A Daydream are every bit as valid in evaluating the Ride legacy, but reunions tend to focus on one aspect of a band's career often to the detriment of the rest getting the credit it deserves. 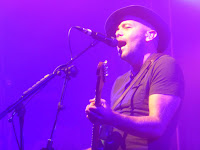 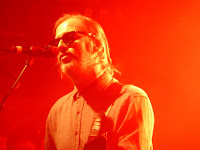 The sound is spot on which is unusual for the venue. It wouldn't be a Ride show if you don't leave with some sort of ringing in your ears. If it's not the volume then the frequency will get you and the sound engineer does a magnificent job in getting it just right in a venue notorious for poor sound. It allows the complexity, the intricacies and, despite the volume, the subtle details in the bass and drums to be heard and the songs benefit immensely from it as they do at home.

As they return for the Nowhere set, you feel the expectation in the room rising, the lighting seems just that little bit brighter and more impactful, the sound a little crisper and the audience far more buoyant. It's an interesting record given they'd produced three EPs by this time that together could be considered a classic debut (check out the Smile album that compiles the first two as Q.E.D. evidence) in their own right, before unleashing this monolith on us.

Staying true the album's original CD release order's eleven songs instead of the vinyl and cassette's eight, it's clear that their statement they would only do this if they could do the record justice was no false promise. Whilst remaining true to the album, it's delivered with a passion and an energy that doesn't dissipate at any point and which hasn't diluted since they left us with that same post-gig ringing in the ears a quarter of a decade ago. It's a classic album because it doesn't have an obvious hit single (other than possibly Taste, one of the extra tracks), but it's a perfectly compiled statement of a band's head space at the time that hit so many raw nerves and stood out in a very fertile time and place for guitar music. They close with an encore of Drive Blind, which ascends into a ferocious deafening wall of noise, and Chelsea Girl from the self-titled EP that announced them to the world and which built the foundations for the year at the end of which Nowhere was born. 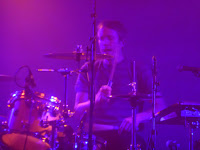 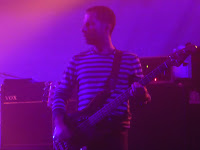 What's also surprising to recall is Andy's contribution to the album. Mark's often seen as the front man as the most commercial tracks and singles feature his lead vocals, but duties are split pretty much fifty / fifty, creating a contrast that works equally well live now as it did back then, Vapour Trail being the prime example. And it'd be wrong to downplay the contribution of Steve and Loz who, although unassuming, form the rhythmic backbone even more so live than they do on the records.

Tonight is about the sound of a band that felt completely natural and that both assaulted and smoothed your hearing with the same song and a dewy-eyed floor shaking reminiscence of an album that stands the test of time. Where they go next, and it was disappointing not to see sold out signs on the door, is a matter for once this tour is done, but here and now is about celebrating the past and an album that changed public opinion on guitar music for the better in the post-Madchester days and opened up windows for so many others to climb through.

Ride played Leave Them All Behind, Like A Daydream, Unfamiliar, Time Machine, Chrome Waves, Twisterella, OX4, Time Of Her Time, Today, Mousetrap in set 1 followed by Seagull, Kaleidoscope, In A Different Place, Polar Bear, Dreams Burn Down, Decay, Paralysed, Vapour Trail, Taste, Here And Now and Nowhere with an encore of Drive Blind and Chelsea Girl.