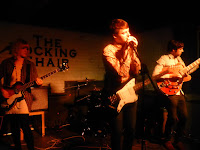 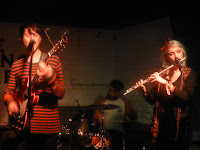 It feels like The Tapestry have been around forever. One of our favourite Manchester bands, they've remained in the shadows as other bands have passed them by on the route to the nation's bigger stages, but they're still one of the most exciting live bands in the city armed with a series of great songs that deserve a much wider audience. We made the short trip over to Sheffield to catch their Gig Buzz / Oxjam headline set and were also impressed by I Set The Sea On Fire.

I Set The Sea On Fire are ordinarily a five-piece but they're missing trumpet player Ellie and playing as a four-piece tonight. A local Sheffield band, they've filled the room up with friends and the curious and they pique our interest with a song about Romeo and Juliet that has an interesting twist to it lyrically and see Megan playing flute in between providing backing harmonies with bass player Pete that form an interesting foil for the energetic front man Billy. The sound man does a sterling job in ensuring a crisp mix that allows everything to shine through and enhance those subtleties and do them justice.

It's a formula that they put to good effect throughout their set of catchy, infectious songs which range from the thoughtful indie-pop of their previous single Pareidolia and the energetic upbeat funk of their forthcoming single Tastes Like Funk. But it's a song called We Start Fires that particularly impresses us, almost two songs in one, but one that captures their spirit and joie de vivre perfectly. We're also intrigued as to what they'd sound like with the trumpet on board. They're a band we'll definitely want to see again next time they cross the Pennines. 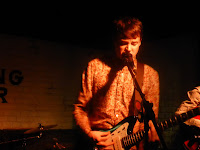 The Tapestry arrive just in time for their set having played in Brighton the previous night and suffered a nightmare journey up, but there's no hangover from that at all. They start with forthcoming single We Talk and it has all the ingredients that make up so many of their great songs. A big booming drumbeat from Zara, Dyna belying his on-stage joker persona with some jaw-dropping guitar work, Katy's uplifting backing vocals which both counter and enhance Liam's lead vocals. He's developed into an enigmatic exciting front man over time, less chaotic than in previous years and that coherence has made them one of the most thrilling live bands in town, both visually as well as aurally.

They're making a habit of winning over strangers - they won a place at last year's Whiskey Sessions in a battle of the bands competition and The Enemy signed them up for dates on their forthcoming tour on the back of their performance at Blackthorn Festival and it's not difficult to see why. They write big anthemic songs that grab you and don't let you go until you submitted to them. We Talk is another in line of Infatuation, Look Out, Rode Your Luck, Take Turns and the glorious Right As Rain which are all present and correct tonight. Tonight's no exception and in Lucille they also show a command of more tender moments without losing any impact and, even more reassuring, they play two new songs Connectives and Catacombs that dismiss any concerns that they might not be writing new material.

It's a mystery as to why The Tapestry haven't had more breaks than they have, proof that you need more than just good tunes to get on in this business. For now, they're our secret, but we should be shouting from the rooftops about them.

Email ThisBlogThis!Share to TwitterShare to FacebookShare to Pinterest
Labels: I Set The Sea On Fire, The Tapestry